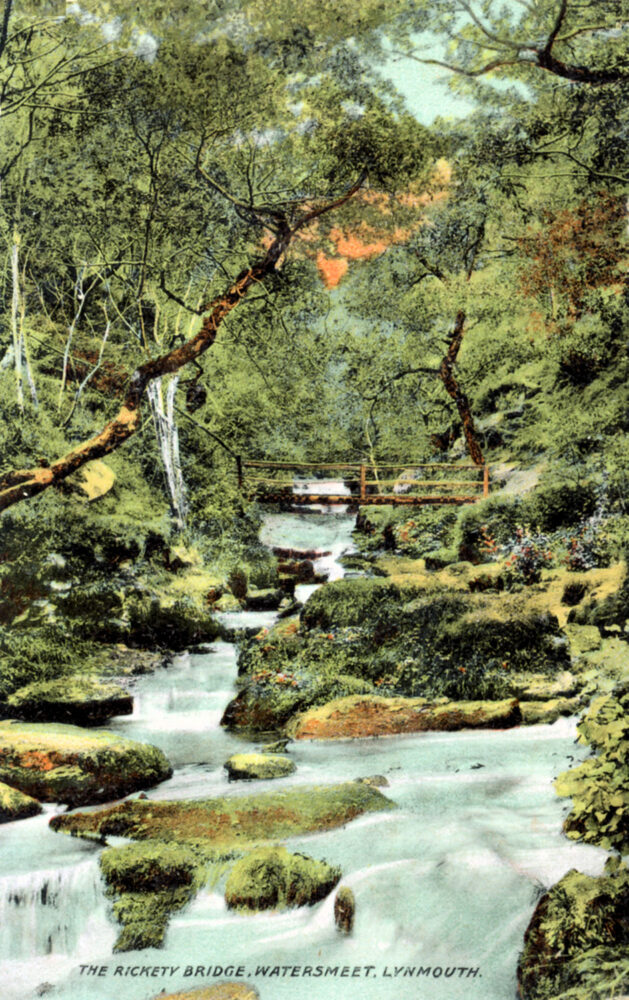 Watersmeet’s setting is a haven for many visitors. Built originally as a fishing lodge and romantic retreat, with connections to the romantic poets, it has been a tea-room since 1901. From a factory bottling mineral water to a devastating flood, Watersmeet has had a varied history. . . . The Lynrock mineral water factory opened on the East Lyn river in 1911, owned and run by the Attree brothers, who lived at Myrtleberry, a short distance up the river. It was a popular watering hole for the Edwardians who could sample what was reputed to be the most palatable water in the world with radioactive qualities that could cure gout. The factory bottled mineral water and made ginger beer until 1939 when it closed due to lack of demand.
National Trust

Watersmeet House is a National Trust property located some 1.8 miles (2.9 km) east of Lynmouth, in the English county of Devon. A former fishing lodge, it is today used as an information centre, tea room and shop by the National Trust. Adjoining the house is the Watersmeet SSSI, a Site of Special Scientific Interest.The house, which dates from approximately 1832, was built for Walter Stevenson Halliday. It stands at the bottom of a deep gorge at the confluence of the East Lyn River and Hoar Oak Water. The house itself lies on the east bank of the river in the civil parish of Brendon and Countisbury, although the other bank is in Lynton and Lynmouth parish. Approximately 200 metres (660 ft) from the house on the bank of the river are a pair of lime kilns dating from the late 18th or early 19th century. Watersmeet House is the starting-off point for some 40 miles (64 km) of woodland, streamside and seaside walks. The site has been a tea garden since 1901, and has been owned by the National Trust since 1936.
Wikipedia