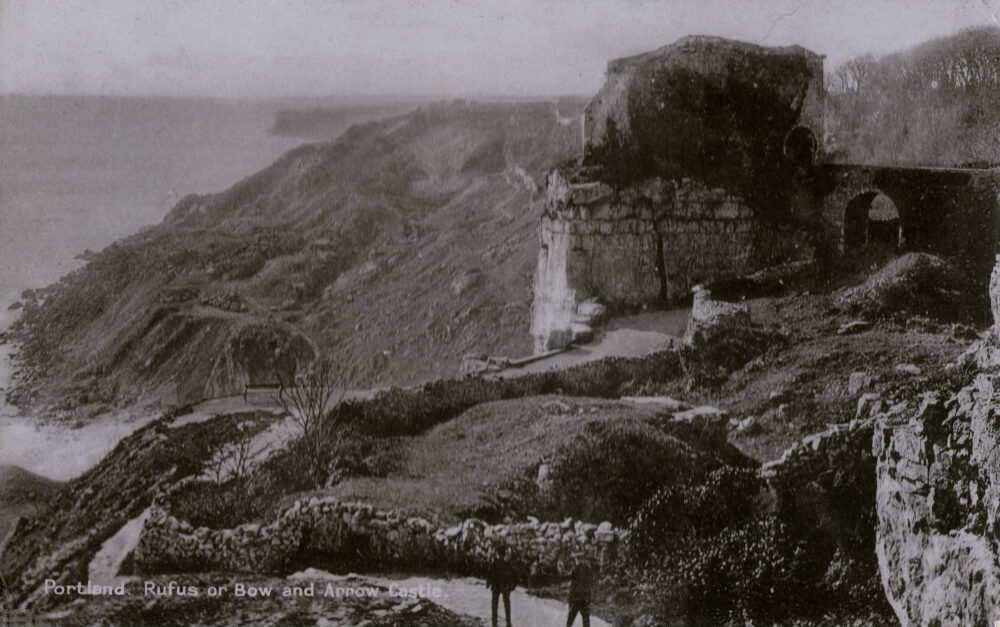 The monument includes a tower keep castle and church situated on the summit of steep coastal cliffs on the east side of the Isle of Portland overlooking Church Ope Cove. The tower keep survives as a roofless irregular pentagonal plan tower. The walls to the north and west survive to full height and retain a number of shaped corbels for a parapet with machicolations. The south east wall is of thinner construction and has a blocked chamfered doorway. A gateway to the south west has an arched doorway. In the north and west walls at first floor level are five embrasures, internally splayed with circular gun-ports. Beyond the south gateway a section of curtain wall follows the slope and stands up to 1.5m high. To the east further buildings were removed by coastal erosion. The tower building dates to the 15th century and is approached from the north by a 19th century rounded headed arched gateway and bridge. The castle is thought to have been a reconstruction of an earlier castle captured by Robert Earl of Gloucester in 1142. It is also known as ‘Bow and Arrow Castle’.
Historic England

Rufus Castle was probably built for King William II (called “Rufus” for his red hair). It is likely that the structure we see today was the keep of a much larger castle. Little remains of that first castle, with the possible exception of the arch that spans the path from Church Ope Road.
Britain Express

The structure was substantially rebuilt in the fifteenth century by Richard, Duke of York and these are the ruins visible today. The centrepiece of the new construction was an irregular pentagonal tower that was clearly built on top of earlier foundations. The walls of this tower were punctuated with holes bored through the stonework to provide a means for archers to fire at attackers – a simple design lacking the elaborate arrow slits added to many medieval castles – and which gave the fortification its alternative name of Bow and Arrow Castle. After the Tudor period the castle was allowed to fall into ruin – particularly after the construction of Portland and Sandsfoot Castles by Henry VIII – and eventually the adjacent mansion house known as Pennsylvania Castle became their home.
Castles Forts Battles

The walls to the N. and W. stand to their full height and retain at the top a number of shaped corbels for a machicolated parapet, but part of the S.E. wall, which is thinner, has broken away. To the S.W. is a gateway with four-centred, arched head; to the N. is a 19th-century gateway with a round-arched head approached by a bridge of the same date. In the S.E. wall is a chamfered stone jamb of a doorway which has been closed up. In the N. and W. walls, at first-floor level, are five embrasures, splayed internally under segmental rear arches, with circular gun-ports. Outside the S. gateway are the remains of stone footings and there are said to have been further buildings to the E. where the cliff has fallen away.
“An Inventory of the Historical Monuments in Dorset, Vol 2”, British History Online, 1970

This castle stands on the E. coast of the Isle of Portland upon a cliff in the close neighbourhood of an old church. It is a very ancient stronghold, of rough construction, full of small loopholes, in the form of a pentagon. It stands at a height of 300 feet above the sea, and is connected with the mainland by a bridge having a very fine and bold arch. In 1142 when the powerful champion of the Empress Maud, Robert, Earl of Glo’ster, was subduing the Dorsetshire castles, he is said to have built this one, but it is more likely that he only took it by assault, and its origin is doubtful.
“The Castles of England: their story and structure, Vol 1”, James Mackenzie, 1896

A little E. of the old church, and 50 steps of stone above it, is a very ancient castle, in form of a pentagon, full of small loop holes. The foundation of it was much above the top of the tower of the church, and it must have been almofst impregnable before the invention of ordnance. It has been vulgarly called Rufus’s castle, perhaps because built by him. Robert earl of Gloucester in 1142 took it from king Stephen, for the empress Maud.
“The history and antiquities of the county of Dorset”, John Hutchins, 1774