Bath. Roman Baths & Abbey
Caption on back:
Bath: Roman Baths and Abbey
Within a distance of a few yards are the Roman Baths, built about A.D. 55; the Abbey, erected in 1499; the King’s Bath of 17th and 18th century constructions, and the modern Bathing establishment containing the latest scientific appliances for the administration of the radioactive waters for the cure and relief of many complaints.

Before the last century, many people believed there was some special property in the hot springs of Bath which could cure diseases or at least help to restore health. Various constituents of the water’s mineral content were suggested as the curative principle but all were eventually dismissed. Some thought the geothermal heat differed from ordinary heated water and might explain the healing effect. But there was no real evidence to support this claim and by the end of the nineteenth century people were on the point of giving up the search for a curative principle. This all changed in 1903 when Prof. R.J. Strutt detected minute quantities of radium in the hot springs. This led to the discovery that radon, a radioactive gas produced by the nuclear degradation of radium, was also present.
…
Radioactivity, it was suggested, provided the explanation of the Bath Water’s success in alleviating so many diseases. Pamphlets were produced by the Spa Director, John Hatton extolling the virtues of the radioactive water. Efforts were made to collect and concentrate radon by erecting a large cone-shaped lid over the King’s spring and piping the gas to a room in the spa called the Radium Inhalatorium where patients could inhale it.
Bath Medical Museum The Roman Baths, Bath
The hot springs of Bath are of great antiquity, and baths are said to have been erected as early as BC 860. Tradition tells that St. David and King Arthur visited the springs early in the sixth century, when the springs received the blessing of the church.

Not sure when the “restoration” was. Might be 1890s redevelopment/reopening of the site. The carved statues date from then (1894). 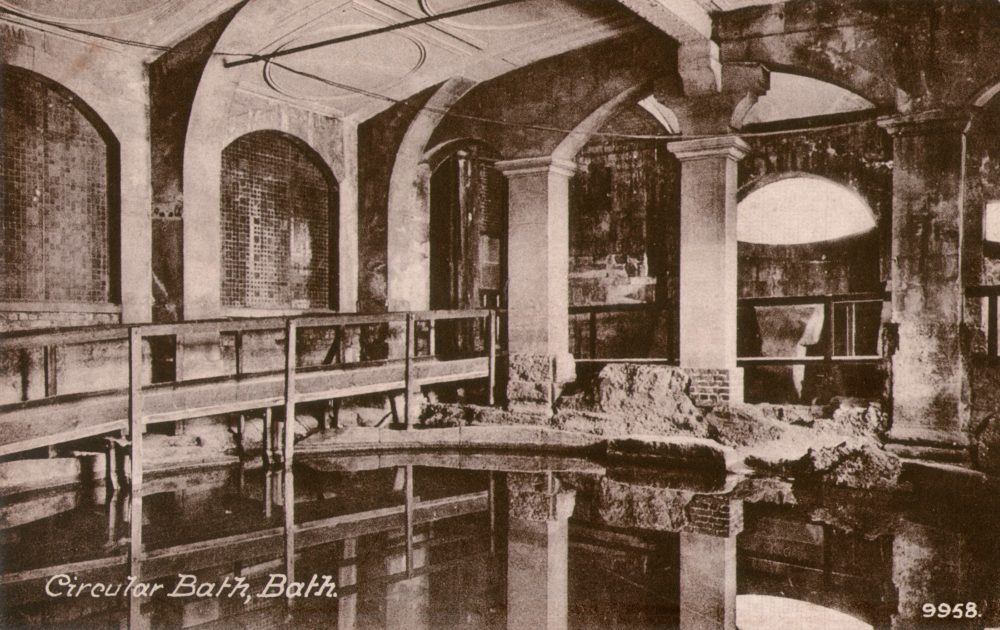