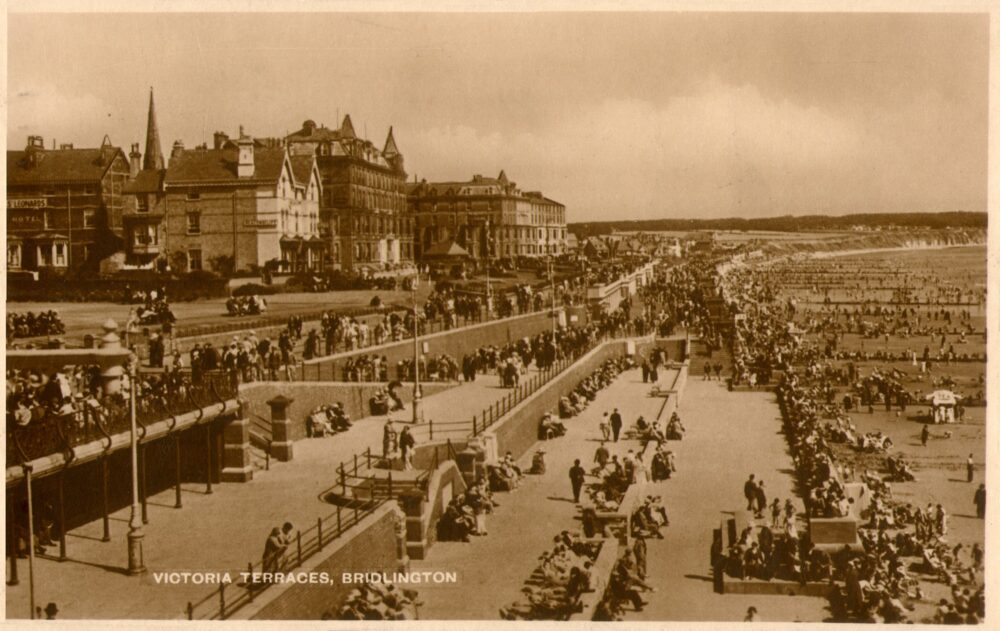 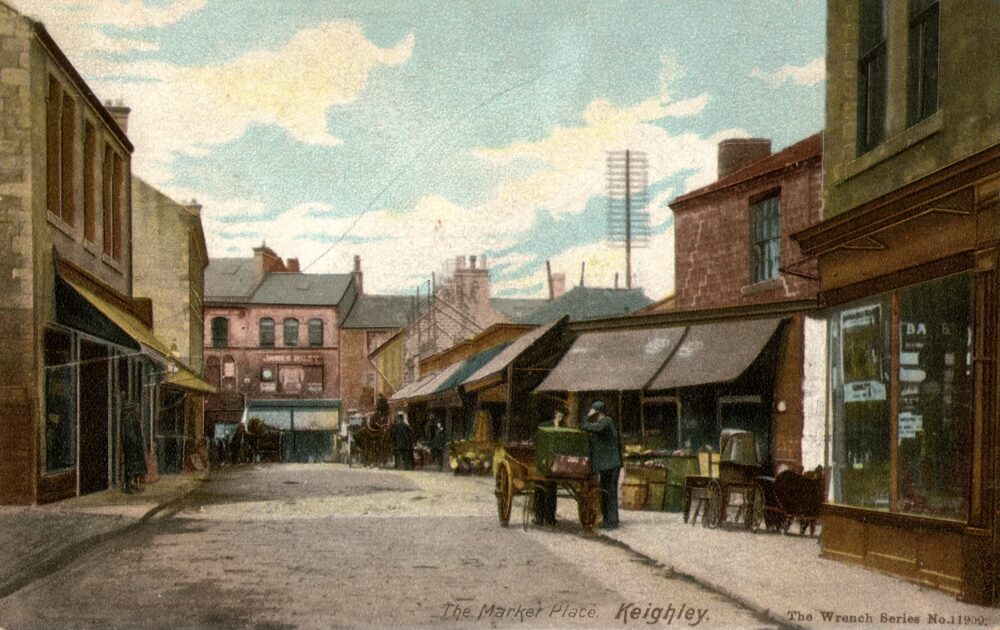 A series of postcards.

Undated, but the image on the last card also appears on a card postmarked 1939. “The Medal Presses. The Royal Mint.”

“Annealing Furnaces. The Royal Mint. Horizontal.”
This and the next image were both on the same card.

“Annealing Furnaces. The Royal Mint. Rotary.”
This and the previous image were both on the same card. 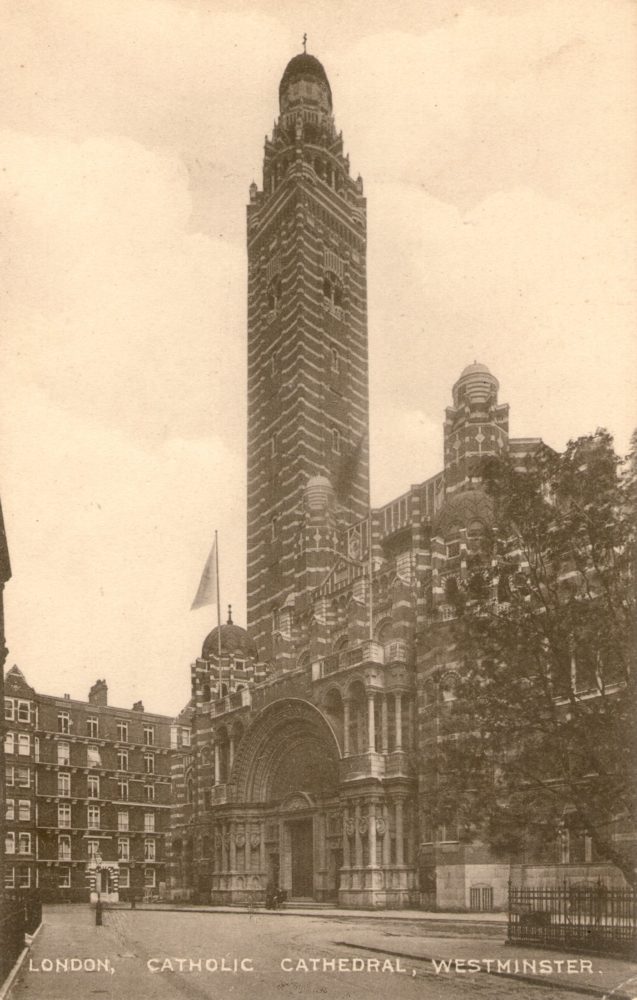 London, Catholic Cathedral, Westminster
On the back:
A Landmark of Westminster, made prominent by its high campanile and byzantine style of structure. From design by by the late J.F. Bentley. When completed will be the handsomest Catholic Cathedral in England. The Eucharistic Congress specially represented from Rome, and the subsequent procession of Catholic Dignitaries rarely if even seen before in England created a prominence of public interest unparalleled in recent years. A part of old Tothill Fields prison formerly occupied this site.

In the late 19th century, the Roman Catholic Church’s hierarchy had only recently been restored in England and Wales, and it was in memory of Cardinal Wiseman (who died in 1865, and was the first Archbishop of Westminster from 1850) that the first substantial sum of money was raised for the new cathedral. The land was acquired in 1884 by Wiseman’s successor, Cardinal Manning, having previously been occupied by the second Tothill Fields Bridewell prison. After two false starts in 1867 (under architect Henry Clutton) and 1892 (architect Baron von Herstel), construction started in 1895 under Manning’s successor, the third archbishop, Cardinal Vaughan, with John Francis Bentley as architect, and built in a style heavily influenced by Byzantine architecture.

The cathedral opened in 1903, a year after Bentley’s death. One of the first public services in the cathedral was Cardinal Vaughan’s requiem; the cardinal died on 19 June 1903. For reasons of economy, the decoration of the interior had hardly been started and still much remained to be completed. Under the laws of the Catholic Church at the time, no place of worship could be consecrated unless free from debt and having its fabric completed. The consecration ceremony took place on 28 June 1910, although the interior was never finished.
Wikipedia. 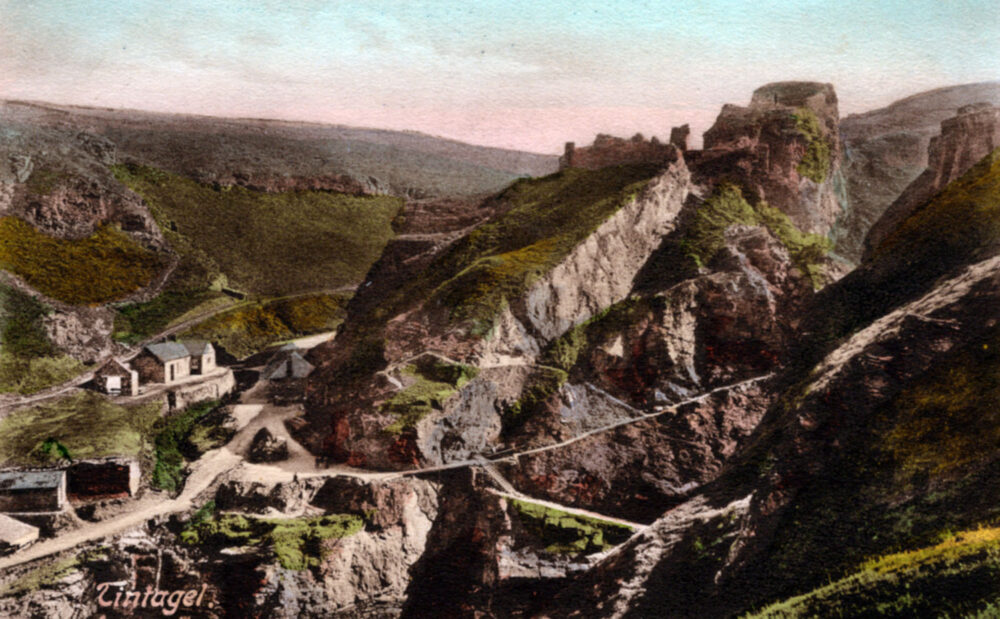 History and legend are inseparable at Tintagel. From about the 5th to the 7th century AD it was an important stronghold, and probably a residence of rulers of Cornwall. Many fragments of luxury pottery imported from the Mediterranean were left behind by those who lived here. It was probably memories of this seat of Cornish kings that inspired the 12th-century writer Geoffrey of Monmouth to name it in his History of the Kings of Britain as the place where King Arthur was conceived, with the help of Merlin. At the same time, Cornish and Breton writers linked the love story of Tristan and Iseult with Tintagel. In turn, these associations with legend led the hugely rich and ambitious Richard, Earl of Cornwall, to build a castle here in the 1230s. The site was of no military value – legend alone seems to have inspired him to build here. And long after the castle had fallen into decay, its mythical associations kept interest in Tintagel alive.
English Heritage

In 1225, Richard, 1st Earl of Cornwall traded with Gervase de Tintagel, swapping the land of Merthen (originally part of the manor of Winnianton) for Tintagel Castle. A castle was built on the site by Earl Richard in 1233 to establish a connection with the Arthurian legends that were associated by Geoffrey of Monmouth with the area and because it was seen as the traditional place for Cornish kings. The castle was built in a more old-fashioned style for the time to make it appear more ancient. . . . John Holland, 1st Duke of Exeter was appointed constable of Tintagel Castle in 1389. After Richard, the following Earls of Cornwall were not interested in the castle, and it was left to the High Sheriff of Cornwall. Parts of the accommodation were used as a prison and the land was let as pasture. The castle became more dilapidated, and the roof was removed from the Great Hall in the 1330s. Thereafter, the castle became more and more ruinous and there was progressive damage from the erosion of the isthmus that joined the castle to the mainland.
Wikipedia. 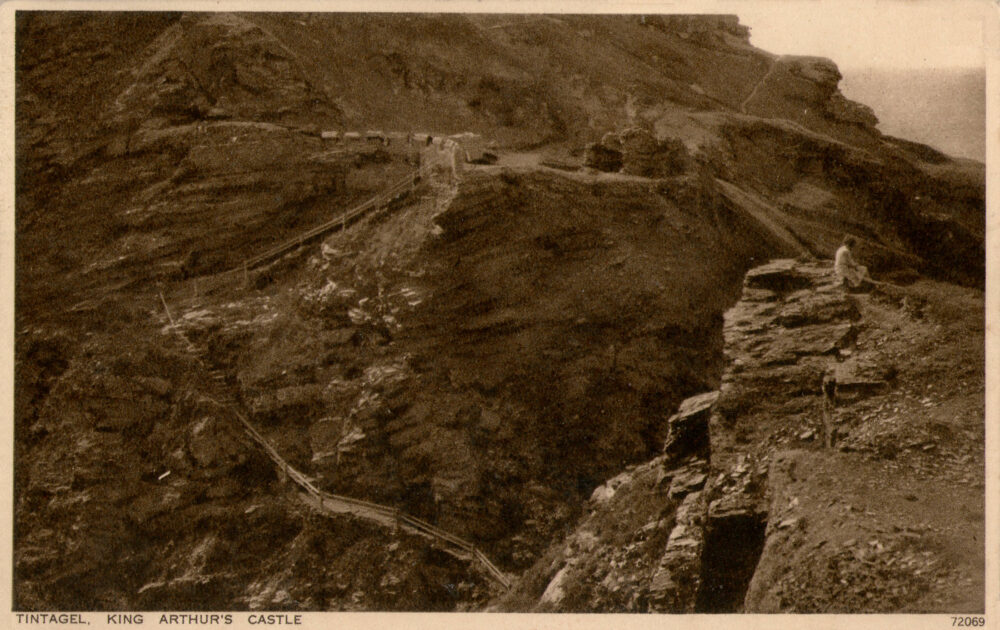 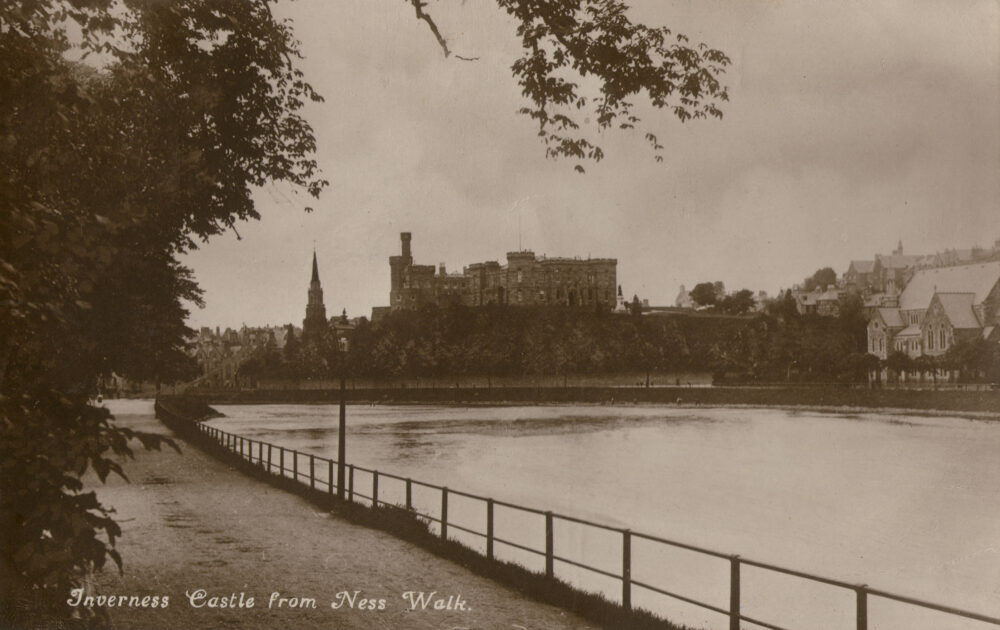 Inverness Castle (Scottish Gaelic: Caisteal Inbhir Nis) sits on a cliff overlooking the River Ness in Inverness, Scotland. The red sandstone structure, displaying an early castellated style, is the work of a few 19th-century architects. William Burn (1789–1870) designed the Sheriff Court, Joseph Mitchell (1803–1883) the bastioned enclosing walls, and Thomas Brown II (1806–c. 1872) the District Court, originally built as a prison. It is built on the site of an 11th-century defensive structure. Until 30 March 2020, it housed Inverness Sheriff Court: . . . The current Inverness Castle was built in 1836 on the site of the original. To improve the more recent castle, a gas, light and water system was installed.
Wikipedia. 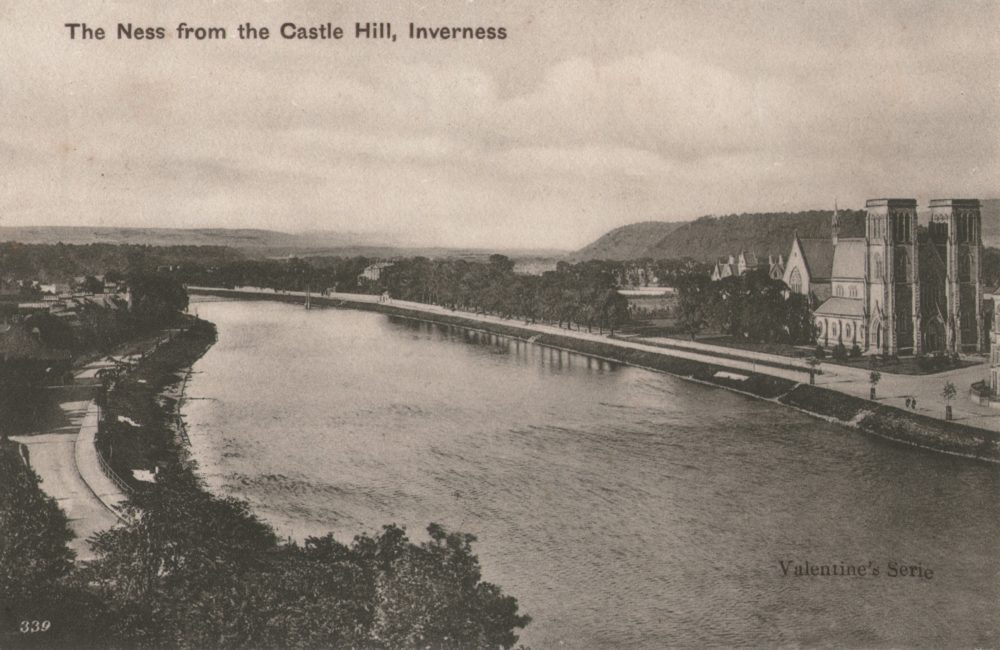 The Ness from the Castle Hill, Inverness
Publisher: Valentine 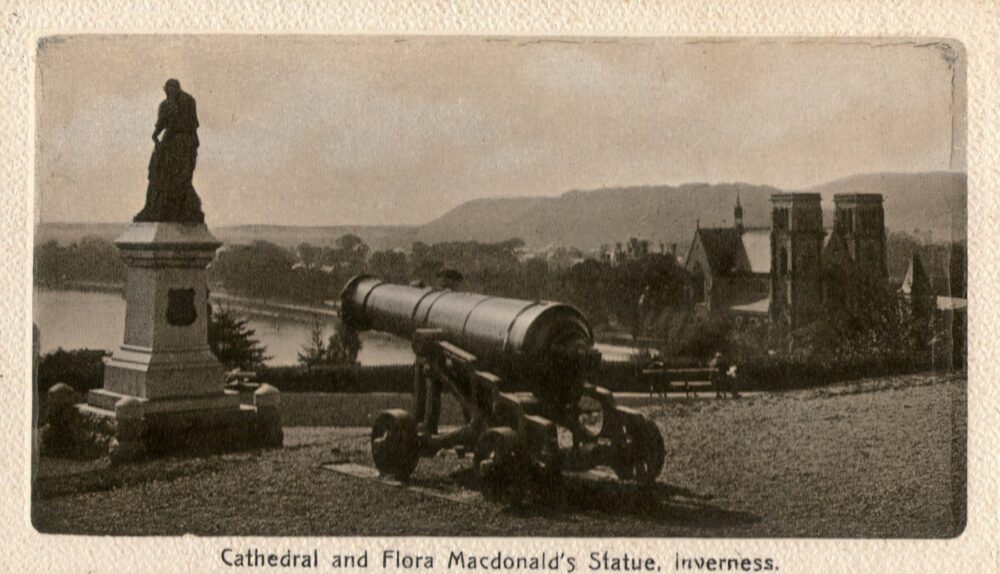 Monument to Flora Macdonald, Castle Hill, Inverness,” by Andrew Davidson (1841-1925). 1896-99. Bronze group, including the collie dog. The monument stands in front of the Sheriff Court, high on Castle Hill, Inverness, so that, as John Gifford says, Flora is shown gazing “down the Great Glen” (197) — the valley of the River Ness. Flora Macdonald was the young woman who helped Bonnie Prince Charlie escape from Scotland after the Jacobites were routed at the Battle of Culloden in 1746. According to the “Inverness City Trail,” the statue of the Jacobite heroine was paid for” by the generosity of “Captain J. Henderson MacDonald of Caskieben, and of the 78th Highlanders.” As well as an inscription of Flora Macdonald’s name in the granite pedestal, there is a bronze plaque, in the shape of a shield, with a quotation in both Gaelic and English.
Victorian Web