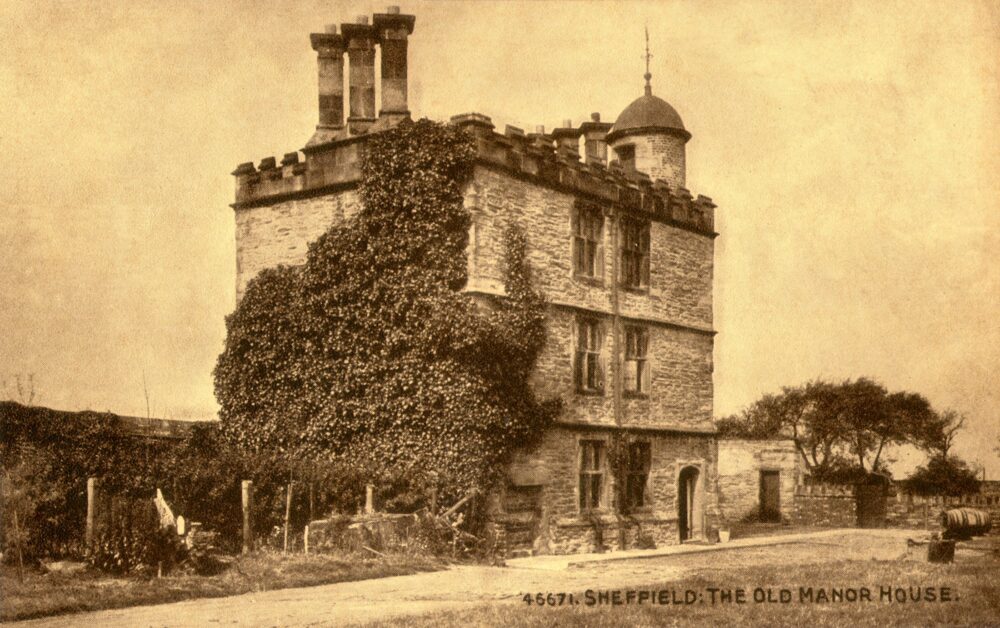 Sheffield Manor Lodge, also known as Sheffield Manor or locally as Manor Castle, is a lodge built about 1516 in what then was a large deer park southeast of Sheffield, South Yorkshire, England, to provide a country retreat and further accommodate George Talbot, the 4th Earl of Shrewsbury, and his large family. . . . The remains of Sheffield Manor Lodge include parts of the kitchens, long gallery, and the Grade II* listed Turret House (also called “Queen Mary’s Tower”), which contains fine sixteenth-century ceilings. Some evidence points to the Turret House being built by 1574, when the Earl of Shrewsbury’s accounts record payments for masonry work on the “Tyrret” at Sheffield Manor. It has three storeys of two rooms. The stair at one corner rises above the building onto the roof. This seems to have been designed as a viewing platform and is comparable with the “Hunting Tower” at Chatsworth House. . . After Sheffield Manor fell into the hands of the Duke of Norfolk, it was neglected, sold to tenant farmers, and largely dismantled in 1706. Some remaining walls and a window were removed to the grounds of Queen’s Tower in Norfolk Park by Robert Marnock in 1839.
Wikipedia.

The early hunting lodge was regularly extended – at least six building phases have been identified prior to the early 16th century. George Talbot, the fourth Earl of Shrewsbury, was the first Lord of the Manor to take an active personal interest in local affairs, and expanded and upgraded the existing lodge considerably, so that by the beginning of the 1500s quite an extensive complex of buildings, a grand Tudor manor house, was in existence. . . . During the 1570s, the sixth Earl and his wife undertook a major programme of remodelling the manor house, adding a new prestigious brick wing and, in 1574, the Turret House – a new gatehouse and the only building that remains today.
Sheffield Manor Lodge

After the death of George Talbot, the Earls rarely visited the site and the land was leased to tenant farmers. It fell to the Duke of Norfolks in 1660 who have owned the land ever since. In 1708 most buildings were demolished and used for local building works. One tower stood until 1793 when it collapsed during a storm. The Turret House remains to this day having been used as part of farm buildings. . . . In the 1870s, the 15th Duke of Norfolk restored the Turret House, removing the surrounding farm buildings. The stained glass windows on the upper floors date from this Victorian restoration.
Sheffield Manor Lodge 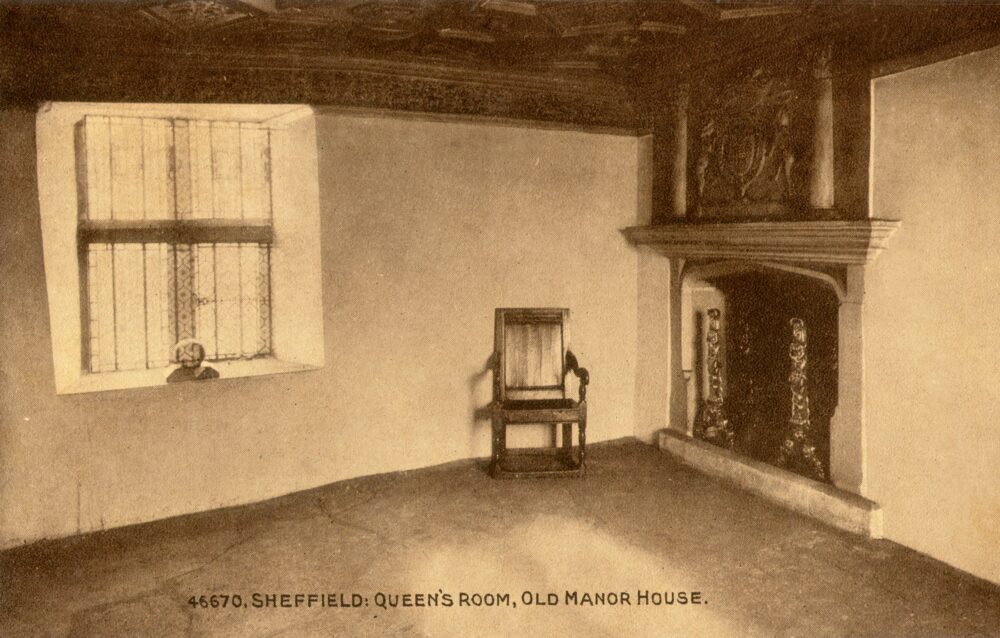 The principal remains at Sheffield consist of a few walls and chimney stack and the so-called Turret House, the building especially erected by Shrewsbury in 1574 for, it is believed, the safe keeping of the Queen. It was restored by the late Duke of Norfolk in 1872, after it had been discovered among some farm buildings. It is square, three storeyed, and stands outside the defences of the Castle. Tiles of French origin were discovered here round the fireplace of what has long been known as Queen Mary’s Room. This battlemented Tudor building, with a lead-covered roof, has a turret from which it takes its name and three chimney stacks. It faces the main entrance to the Manor Lodge or House. A stone stairway leads from the ground floor to the turret. Mary would be under constant observation in this compact dwelling and also separated from Shrewsbury’s household. During the early part of her stay in Sheffield she was free of the splendid park, but afterwards took her exercise on the leaden roof.
“In The Steps of Mary, Queen Of Scots”, Marjorie Bowen (1952)