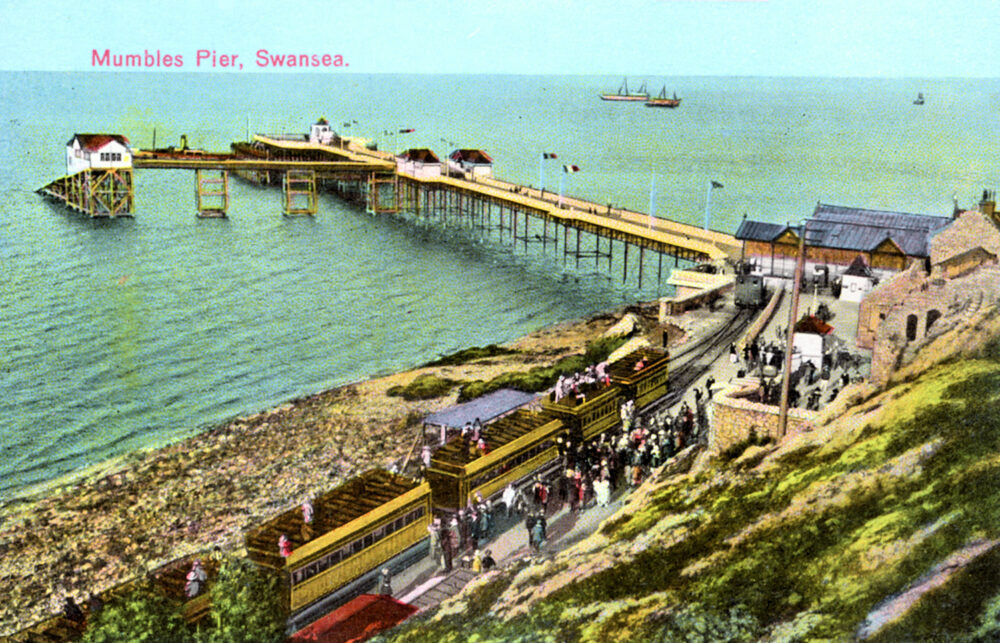 The Grade II listed structure of Mumbles Pier is an 835 feet (255 m) long Victorian pleasure pier built in 1898. It is located at the south-western corner of Swansea Bay near the village of Mumbles, within the city and county of Swansea, Wales. Designed by W. Sutcliffe Marsh and promoted by John Jones Jenkins of the Rhondda and Swansea Bay Railway, the pier opened on 10 May 1898 at a cost of £10,000. It was the western terminus for the world’s first passenger carrying horsecar railway, the Swansea and Mumbles Railway; and a major terminal for the White Funnel paddle steamers of P & A Campbell, unloading tourists from routes along the River Severn and Bristol Channel.
Wikipedia

The Pier is one of Swansea’s most iconic and recognisable landmarks. Steeped in a rich history the Pier conveys a triumph in Victorian Architecture. The Mumbles Pier is one of only six surviving iron piers in Wales and is currently Grade II listed. The Mumbles Pier was opened to the public on the 10th May 1898, the project was carried out by seasoned pier specialists Mayoh and Haley and was overseen and designed by celebrated Victorian engineer W.Sutcliffe Marsh. The 835ft structure cost £10,000 to complete, and its completion which was relitively late in the history of Piers, takes on many of the architectural successes learnt from other piers all over the country. Along with the opening of the Pier came the extension of the Mumbles Railway line from Oystermouth to the newly built Pier Terminus.
Mumbles Pier

A large crowd from the surrounding area gathered to watch the official opening, with the 3rd Glamorgan Volunteer band playing a selection of tunes on the band-stand. Local schoolchildren were given a half-day holiday in celebration of these major events. The Lady Margaret, the first steam boat to land passengers on the pier, arrived at 2pm and brought with it around 700 visitors from Bristol, Clevedon, Cardiff and Penarth. The steam boat, which was to run regular trips to Mumbles Pier throughout that season, departed at 4:30pm. Following this, the festivities continued at the new Mermaid Hotel, in which 80 gentlemen were entertained by Sir John Jones Jenkins MP, the Chairman of the Mumbles Railway & Pier Company.

Jenkins said that as well as being a tourist attraction to bring more footfall to the area, he saw a large commercial opportunity. Its geographical location, with a bay on the one side laid out for commercial purposes, with a large industry capacity, complimented by its natural beauty, stood out to him. He referenced the fact that as development continued in Cardiff, thanks in part due to the growing coal trade, they were making very large docks to accommodate the largest ships of the era. Newport, as well as Liverpool, were doing similar, with ships of up to 1000ft long docking there. Swansea, meanwhile, had nowhere near this capacity, and he wanted to accommodate larger ships in the area – up to 720 feet. Following a long speech, he raised a toast to the “success of the Mumbles Railway & Pier Company”.

Despite these ambitions, the pier’s history is mostly recreational, as Swansea Docks did not appreciate the competition, and the industrial boom of the area did not come to fruition. The 1904 Centenary souvenir book of the Mumbles Railway, recorded that ‘The Pier has become, without doubt, the most popular resort in the locality’ and The White Funnel paddle steamers of P and A Campbell, such as the ‘Brighton’ would call to take trippers across to Ilfracombe and other ports along the River Severn and Bristol Channel.
Swansea Herald: Mumbles pier – Its history, the present, and future hopes