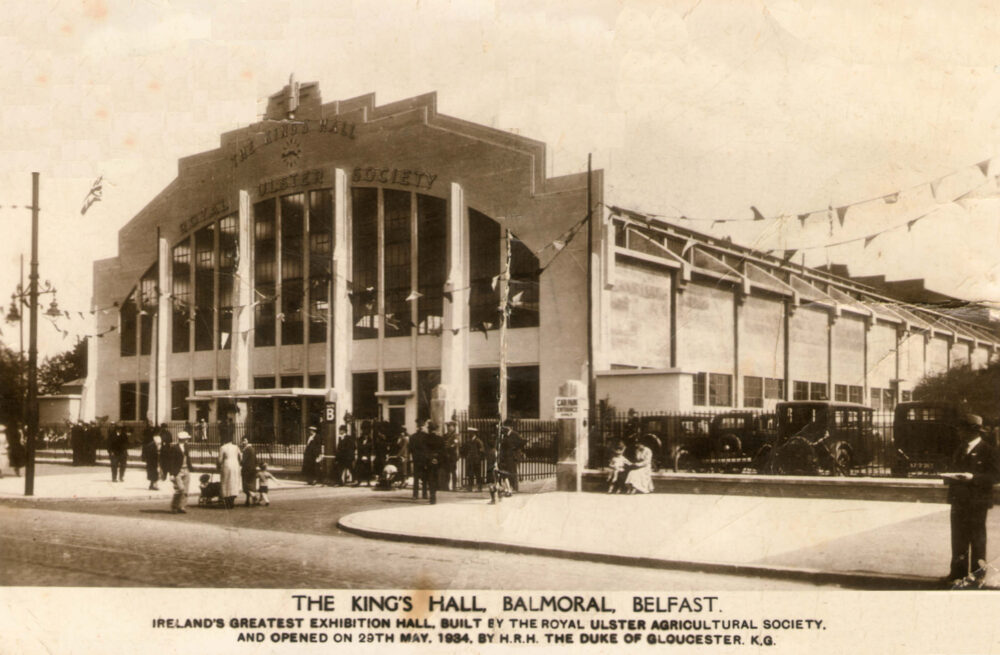 The King’s Hall was a multi-purpose venue located in Belfast, Northern Ireland. The King’s Hall consisted of 6 event venues. The King’s Hall is owned by the Royal Ulster Agricultural Society (RUAS) (previously the North East Agricultural Association of Ireland), who moved to the venue in 1896 from their previous showgrounds in Belfast Corporation Markets area.
. . .
The King’s Hall was designed by Leitch and Partners, Glasgow, built in 1933 by J & R Thompson, Belfast and opened by the Duke of Gloucester on 29 May 1934. The King’s Hall was the largest exhibition venue in Northern Ireland and prior to the completion of the Odyssey and the Waterfront Hall, was the only large concert venue in Northern Ireland. It hosted the Balmoral Show, an annual agricultural show with regular attendees in excess of 75,000. The stepped facade of the hall features substantial windows and Art Deco motifs on doors and buttresses. Inside, the functional space is spanned by reinforced concrete arches.
Wikipedia.

The Kings Hall at the Balmoral Showgrounds was constructed in 1933-34 as a permanent exhibition hall for the Royal Ulster Agricultural Society and was officially opened on 29th May 1934 by H.R.H. the Duke of Gloucester, being renamed the ‘King’s Hall’ by the permission of King George V. The Royal Ulster Agricultural Society immediately put the Kings Hall to use for a variety of purposes. In 1936 alone the hall was utilised for a number of exhibitions, evangelical meetings, boxing and wrestling contests and a circus that was held at Christmas. Staples of the annual schedule at the Kings Hall included the Ideal Home Show, motor shows and wedding exhibitions. In later decades the hall would also be used for music concerts; the Beatles famously performed at the Kings Hall on 2nd November 1964. The Kings Hall was put to a very different use during the Second World War when the exhibition hall was requisitioned for the duration of the conflict. The premises at Balmoral were occupied until a few months after the end of hostilities in 1945. The Air Ministry (Ministry of Supply) acquired the site in 1940 and converted the Kings Hall into an aircraft factory for Short Bros. & Harland in order to construct fuselages for Stirling Bombers.
King’s Hall Health and Wellbeing Park