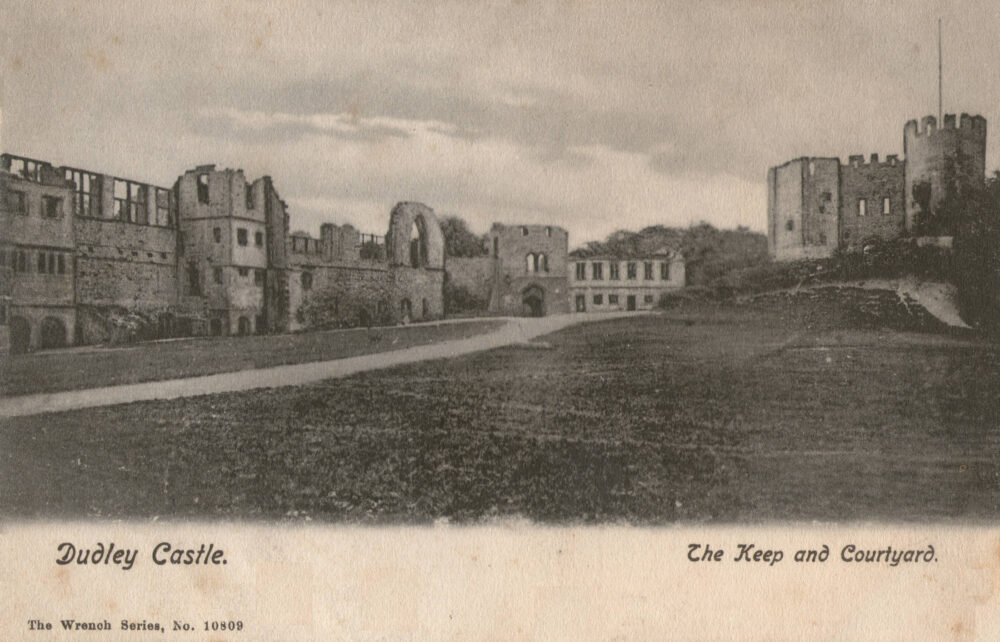 The origins of Dudley Castle are vague. The most commonly accepted version of events is that a motte and bailey castle was begun around 1070 by a Norman noble named Ansculf de Picquigny, who fought with William the Conqueror at the Battle of Hastings and was rewarded with lands in the Midlands. . . . The motte, or mound, from this Norman castle still stands, but no other features remain of Ansculf’s timber fortress. That timber castle was rebuilt in stone by the Paganel family. It was defended by forces loyal to Queen Maud during The Anarchy, the 12th-century Civil War between King Stephen and his cousin Maud. In 1138 King Stephen’s men besieged the castle but the defenders held out. In 1173 Gervase Paganel rebelled against Henry II and the king ordered the castle to be destroyed. The castle passed to Gervase Paganel’s nephew Ralph de Somery, and it was his descendant Roger de Somery who began to rebuild the castle in 1262. Rebuilding continued gradually over the following fifty years by Somery’s heirs, who often used the family name Dudley. The striking castle keep dates from this period.
Britain Express

Dudley Castle suffered the same fate as most of the Royalist garrisons, in that its defences were demolished. The Keep, gatehouse, and defensive walls were all sleighted, and Dudley’s role as a fortress ended forever in 1647. However the domestic buildings of the Castle were allowed to remain intact, and they were used occasionally for the next hundred years or so by the Ward family, who had succeeded the Suttons. The real end of the castle came in 1750 when a devastating fire swept through the remains. Rumour had it that the local militia kept their gunpowder in the castle, and, for fear of explosions, nothing was done to put out the fire, so Dudley Castle simply became “A Romantic Ruin”.
Friends of Dudley Castle

Erdeswick, the old historian of Staffordshire (died 1603) says that Dudley Castle is “mounted loftily on a high mountain, and hath a large prospect into Derby Leicester, Warwick, Worcester, and Shropshire, and a great part of Wales, and is itself in Staffordshire, over all of which it looketh. It is a goodly built house, of an ancient building and large, with great trenches about it, hewn out of a hard rock, and a fair chief tower within it on the S. side.” The view from this ruined keep on a clear day is one, perhaps, unequalled in this country.

The keep is the earliest part, being, perhaps, the work of Roger de Somery in 1264, though Hartshorne gives it to the reign of Edward II., before the castle was taken from the de Someris by Despencer. It is an oblong building at the S.W. angle of the castle, with round corner turrets, standing on a mound, and is entered through a low pointed gateway in the centre of the N. side ; two of the turrets, those nearest the town, with much of the wall, were demolished in 1650. Below the keep are extensive vaults, used probably for prisons. The gatehouse is in a ruinous state, but was at one time of great strength, the walls being 9 feet thick, defended by a moat and drawbridge, and with two circular flanking towers, the lower parts of which remain, together with the outer arch of the barbican. In Parker’s ” Domestic Architecture,” all this work is put down to John de Sutton, early in the reign of Edward III.

The principal building is an extensive mansion, part of which is of the fourteenth and part of the sixteenth centuries, and the walls are tolerably perfect. The vault under the chapel is thought to belong to the earlier manor-house, and would in that case be the oldest surviving portion. The chapel has five pointed windows, and between it and the hall are three rooms, the largest, perhaps, being the lord’s chamber, attached to the upper end of the hall. This stately fabric, called the New Work, was built either by the Duke of Northumberland, or by Sir Edward Sutton on getting back the property. It consists of the great hall; and the rest of the house, rebuilt upon the old walls and vaulted cellars, is in Elizabethan style, including the buildings between the hall and the N. gate-way, and the beautiful octagon staircase tower. There was an entrance in the middle for horsemen to ride up an inclined plane from the courtyard, and a back door at the lower end, with another inclined plane and passage, for the horses to be led down again. There is a deep moat and a large outer bailey, with a round tower at one corner.
“The Castles of England: their story and structure, Vol 1”, James Mackenzie, 1896, p. 396