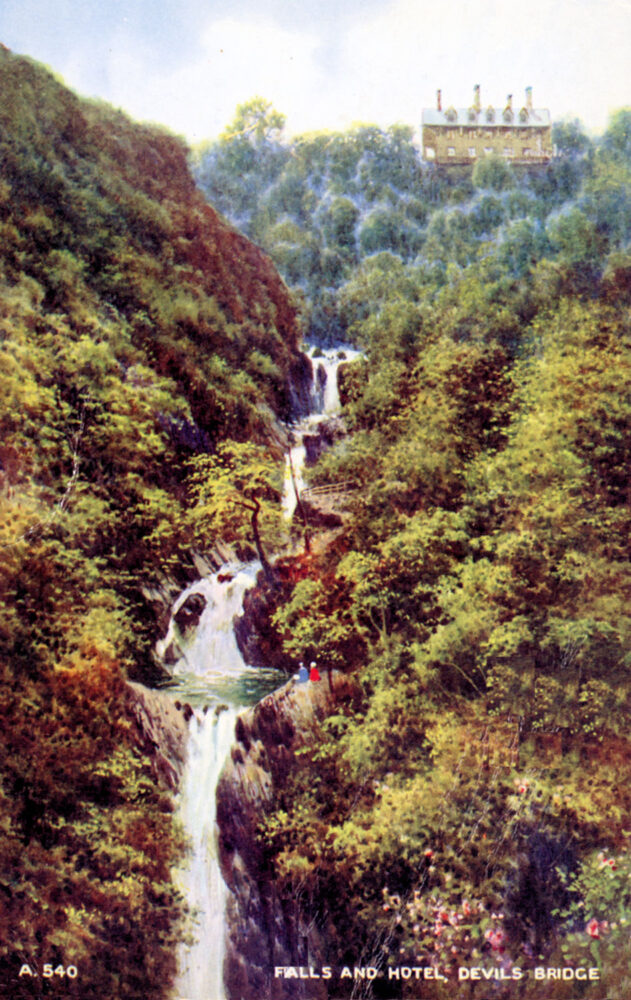 The village is best known for the bridge that spans the Afon Mynach, a tributary of the Rheidol. The bridge is unique in that three separate bridges are coexistent, each one built upon the previous bridge. The previous structures were not demolished. The most recently built, in 1901, is an iron bridge which was erected above the older arches. The original bridge is medieval and the second one, a stone structure, built in 1753 and upgraded in 1777 and in 1814, was erected when the original bridge was thought to be unstable. The builders of the 1753 structure used the original bridge (c. 1075–1200) to support scaffolding during construction and added a second arch. The 1901 structure eliminated the slope in the roadway.
. . .
Devil’s Bridge has been a tourist attraction for centuries. Records indicate that tourists were coming to this area by the mid 1700s and that an inn or hotel has existed nearby since before 1796. The area was once part of the Hafod Estate, owned by Thomas Johnes who built a small hunting lodge on the estate which was eventually expanded into an inn. The building burned down and was rebuilt. Significant renovations were completed in 1837–1839 and in the 1860s. After several expansions and upgrades, it has been operated as the Hafod Hotel, using this name since the 1860s.
Wikipedia

The 300ft Mynach Waterfalls are set deep within the ancient wooded gorge and have attracted many thousands of visitors since the 18th century, including William Wordsworth who wrote about the “Torrent at the Devil’s Bridge”. Today, Devil’s Bridge Falls Nature Trail provides a unique opportunity to see this great natural feature. The Mynych (translates as the ‘Monks River’), is a tributary of the larger Rheidol River, which runs in a deep, wooded valley towards Aberystwyth and the Cardigan Bay coast. Technically, Devil’s Bridge waterfalls can be classified as segmented or tiered falls with five major drops and intervening cascades which add up to a 91 m total drop, and therefore is among the highest in Wales.
Visit Wales

A mile beyond Yspytty we came to the Devil’s Bridge, which is thrown from rock to rock over a deep chasm and foaming torrent. The story of its erection is as follows :—

A woman had lost her cow, and at length saw it grazing on the opposite side of the chasm. In this situation, whether she applied to the devil for assistance, or whether he appeared and voluntarily offered his services I am not certain, but he offered to build the bridge on condition of his taking the first living thing that passed over it. The condition was accepted ; the bridge arose, but the woman found that she had dealt with the devil without being a gainer by the bargain. She found, what she might probably have found before if she had sought for it, that if the cow came to her the cow was the sacrifice ; and if she went to the cow it was worse. From this dilemma she happily extricated herself by throwing a crust of bread across the river, and sending her dog for it over the bridge, thus proving that a woman, at least a Welsh woman, can cheat the devil.
https://archive.org/details/reminiscencesag00huttgoog/page/n59/mode/2up