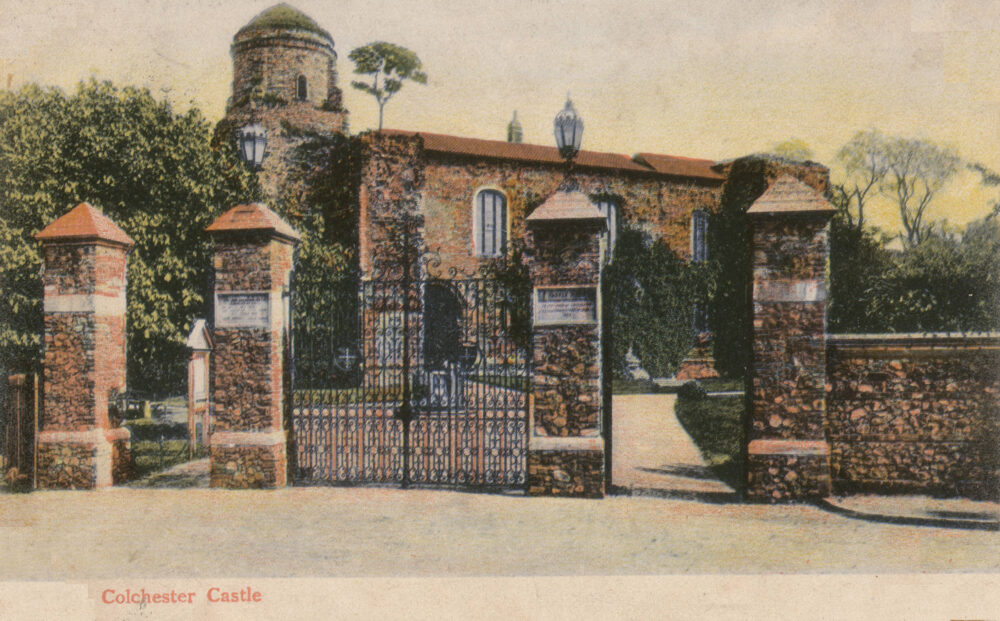 Construction of the castle began in 1076, probably under the supervision of Gundulf, Bishop of Rochester who built the White Tower at London. William I ordered a stone castle on the strategic route between East Anglia and London. Due to a lack of local quality stone, the Norman builders plundered Roman Colchester to build their keep. The Normans built the castle over the ruined Roman Temple of Claudius, built when Colchester was the first Roman capital of Britain. They incorporated the base of the temple into the foundations of the great tower.

Colchester and the White Tower in London were built to a similar plan, both with an apsidal extension. However, Colchester’s corner turrets are more pronounced and its main staircase is the largest diameter newel staircase in Britain, measuring 5 metres across. It is thought that the castle was originally single-storey, as it is still possible to see traces of crenellations in the wall. It could be that during construction it was required to be defended at short notice and was hurriedly crenellated, and then when the danger had passed, work on the other floors was restarted.
Colchester + Ipswich Museums

The castle was in dire condition after the end of the [civil war, and in 1683 it was sold to John Weeley, who planned to tear it down and sell the stone as building material. Fortunately, his plan proved uneconomic, and destruction was stopped, but only after much of the upper storey had been pulled down. Rescue was at hand, for in 1727 an antiquarian and lawyer named Charles Gray was given the castle as a wedding gift. Gray began the process of restoring the building, and created an area of parkland surrounding the ruined keep. This parkland later became Castle Garden. On Gray’s death the castle site was sold to the Corporation of Colchester. In 1860 the Corporation moved its collection of historic artefacts to the castle crypt, and opened it to the public. This was the castle’s beginning of a new life as a museum of local history, a role it fulfils today.
Britain Express

It was this Eudo Dapifer who is thought to have built the Norman castle we now see at Colchester, being ordered, perhaps, or expected, by William to erect one. It was an immense tower or keep, by far the largest of all Norman keeps in England, measuring 155 feet by 113, whereas the White Tower of  London is but 116 by 96. . . . It stands somewhat towards the N.E. corner inside the Roman wall, and is built chiefly of Roman bricks and tiles from the ancient town with bands of stonework, and it is founded on the original gravel without any mound. The plan is the familiar one of the four projecting corner turrets or buttresses, with a chapel apse, and originally it perhaps hail another storey, which would add much to its stateliness. There was, of course, the castle and an outer or nether bailey, but of these no vestiges can be seen. The remains of the Roman wall on the E. N. and W. sides enclose an area known as the inner bailey. These ancient walls are reveted with an earthen slope on each side, that on the N. being 40 feet in height.
“The Castles of England: their story and structure, Vol 1”, James D. Mackenzie, 1897, p 258 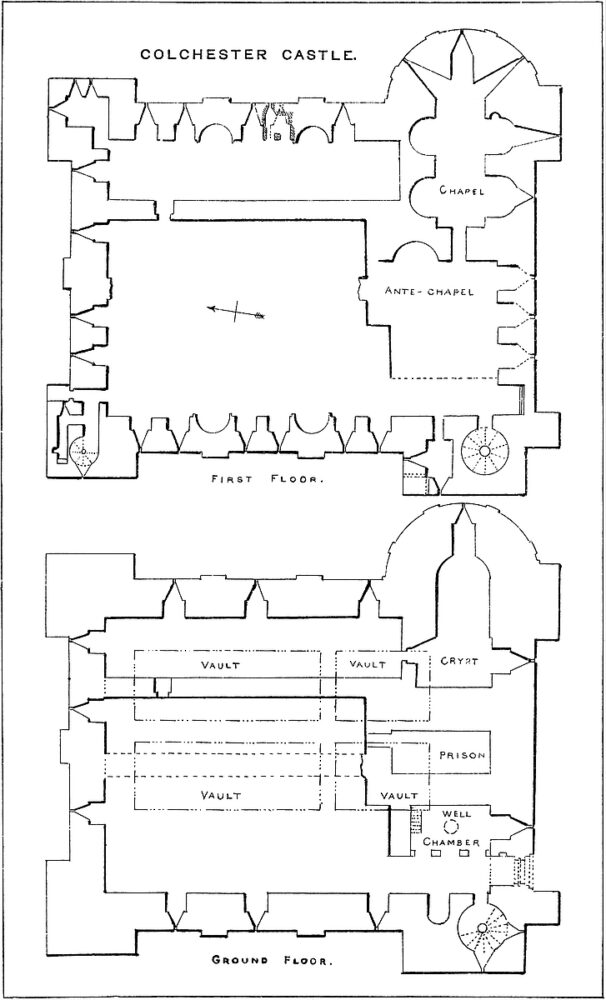 The main entrance is on this floor, at the west end of the south side. A doorway of 7 feet 7 inches opening was flanked on each side by two niched columns with plain bases and capitals, with stiff foliage of Norman character. Above the capitals is a plain chamfered abacus. The head is composed of three members, each a bold roll or bead. The two inner members spring from above the capitals, the outer member, with a dripstone worked in two bands of half-circles, springs from the abacus alone. The abacus is stopped within the portal by a square groove for a portcullis, probably of iron, behind which is a rebate for a door with a hole for a425 stout wooden bar. Five or six steps, now concealed or gone, led up to this doorway, nor are there any traces of a drawbridge. Within the portal, in the wall, here 14 feet thick, on the left, is a small round-headed niche, the flat sides and back of which are carved with low bas-reliefs of certain bishops and saints, including St. Christopher. They are fairly executed, and probably the work of some ingenious porter.
“Mediæval Military Architecture in England, Vol. I”, George Thomas Clark, 1884