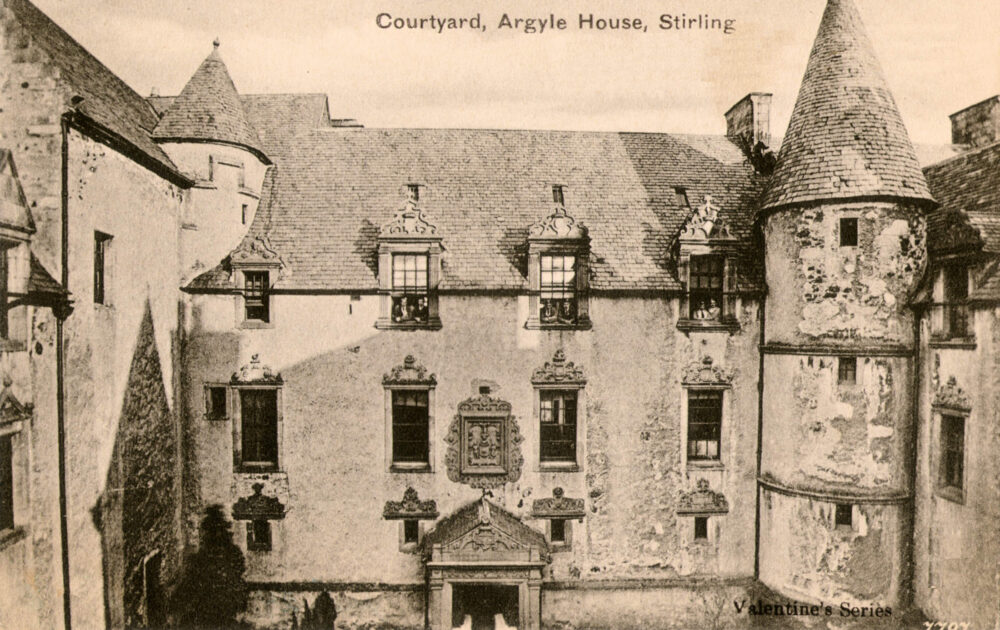 Argyll’s Lodging is the most complete surviving example of a seventeenth century town house in Scotland. It can be found in the upper part of Stirling, just below Stirling Castle’s Esplanade. The house sits behind a screen wall and comprises a collection of buildings built in two phases and in three ranges around an enclosed courtyard. Conversion and extension of an existing sixteenth century tower house began in the 1630s for Sir William Alexander, 1st Earl of Stirling, who had previously resided at Menstrie Castle. Further enlargement was undertaken in the 1670s for the 9th Earl of Argyll. Argyll’s Lodging shows considerable French influence. The turrets sited at each corner of the house overlooking the courtyard have conical roofs typical of French provincial townhouses. Visitors enter the complex through an archway from the road into the courtyard. This is much as it would have been in the 1670s.
Undiscovered Scotland 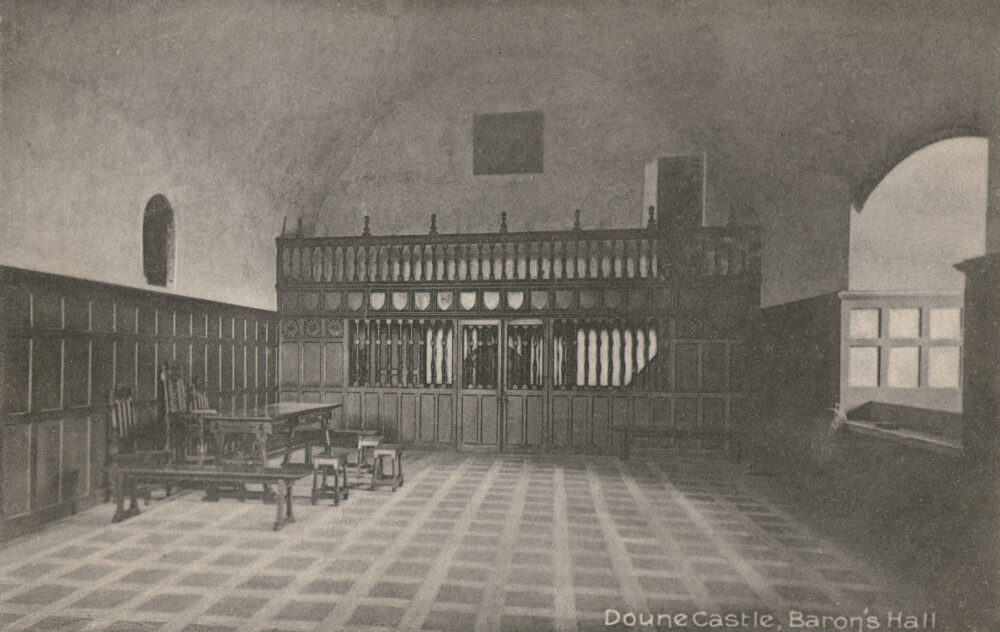 Doune Castle was rebuilt in the late 14th century by Robert Stewart, Earl of Fife and son of King Robert II. . . . His new palace consisted of a large square tower-keep with a projecting round tower to one side; through the basement of this building ran the entrance passageway to the courtyard, and above this was the Duke’s inner hall. Adjacent to this four storey building was the block containing the Great Hall, above three vaulted cellars. These two buildings took up the whole of the north front of the castle. Surviving on the western side is the kitchen tower; other buildings took up the rest of the courtyard walls.
The Castle Guy

The magnificent castle of Doune, which is one of the best examples of the quadrangular architecture of the fifteenth century, was built by Murdoch, Duke of Albany, and was, like Falkland, forfeited to the crown in 1424. It had superseded an earlier structure, the seat of the Earls of Menteith, which came into the possession of Robert, the great Duke of Albany, on his marriage to Margaret, Countess of Menteith. In 1431 it was the dwelling-place of James, Duke of Rothesay, the heir to the throne, then six months old, for whose use forty-eight pounds of almonds were sent to it.
“Royal palaces of Scotland”, Helen Douglas-Irvine & Robert S. Rait, 1911 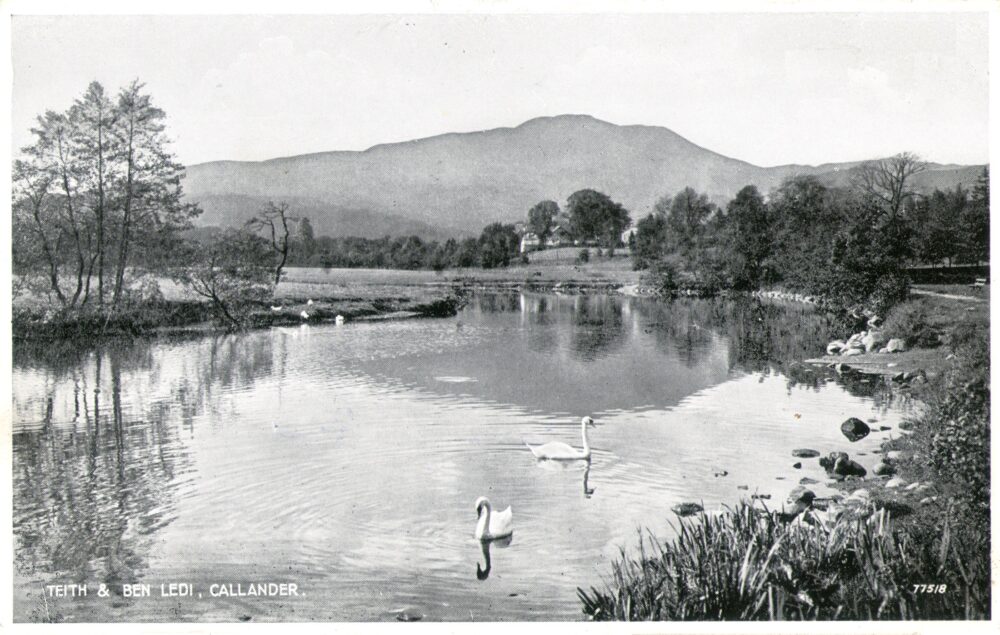 The River Teith is a river in Scotland, which is formed from the confluence of two smaller rivers, the Garbh Uisge (River Leny) and Eas Gobhain at Callander, Stirlingshire. It flows into the River Forth near Drip north-west of Stirling. . . . The ‘Brig o’ Teith’ was constructed in 1535 by Robert Spittal, a Royal tailor to Mary Queen of Scots. According to Charles Roger in ‘A Week at Bridge of Allan 1851’, a ferryman refused Spittal passage across the Teith as he did not have his purse and could not pay. The bridge was built in retaliation.
Wikipedia. 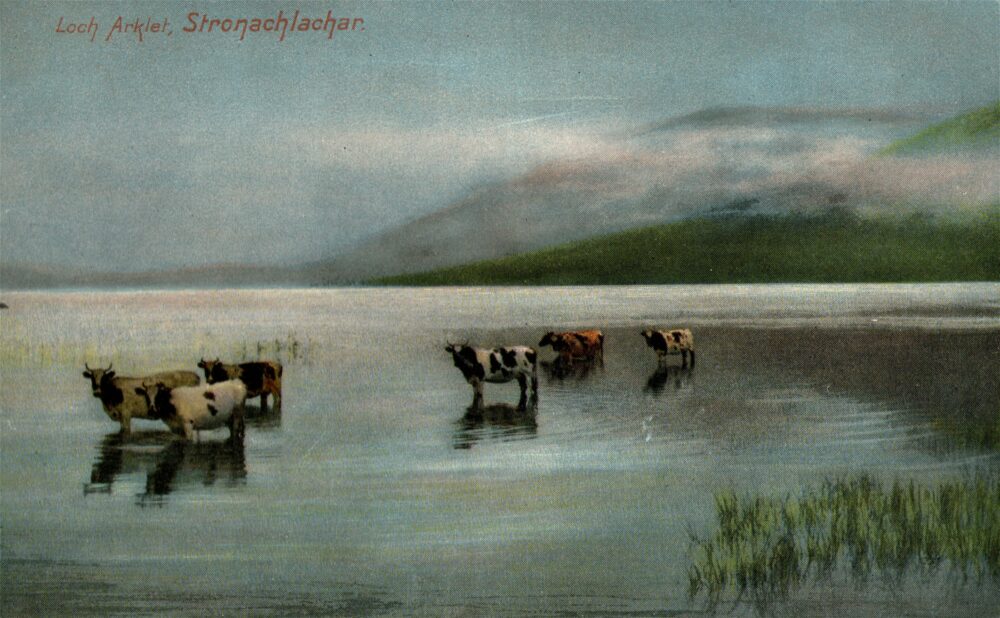 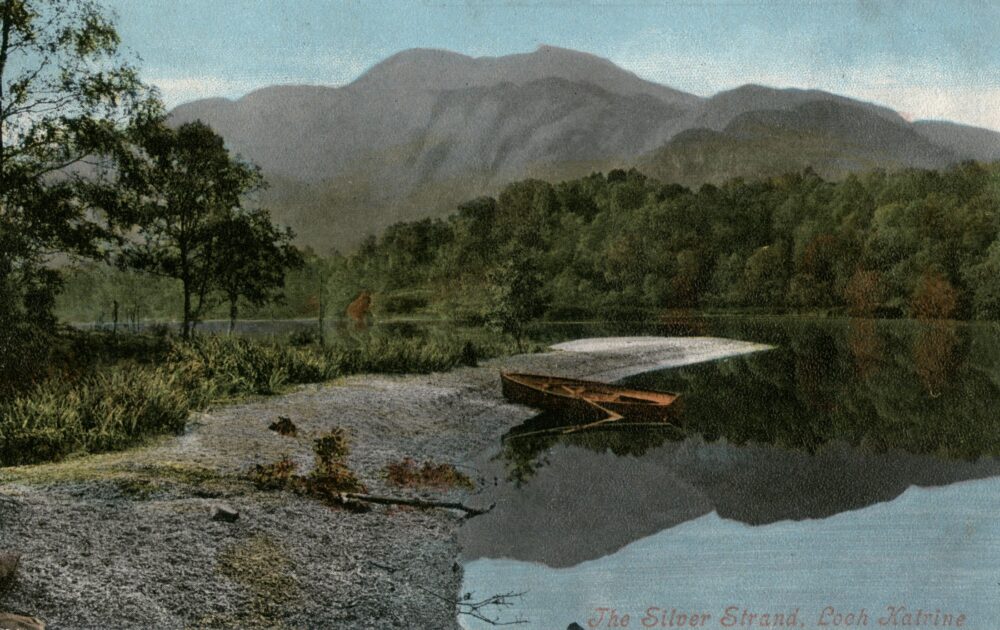 Loch Katrine is now owned by Scottish Water, and has been the primary water reservoir for much of the city of Glasgow and its surrounding areas since 1859.
Wikipedia.

BEAUTIFUL Loch Katrine in all thy majesty so grand,
Oh! how charming and fascinating is thy silver strand!
Thou certainly art most lovely, and worthy to be seen,
Especially thy beautiful bay and shrubberies green.

Then away to Loch Katrine in the summer time,
And feast on its scenery most lovely and sublime;
There’s no other scene can surpass in fair Scotland,
It’s surrounded by mountains and trees most grand.

And as I gaze upon it, let me pause and think,
How many people in Glasgow of its water drink,
That’s conveyed to them in pipes from its placid lake,
And are glad to get its water their thirst to slake.

From “Loch Katerine” by William McGonagall 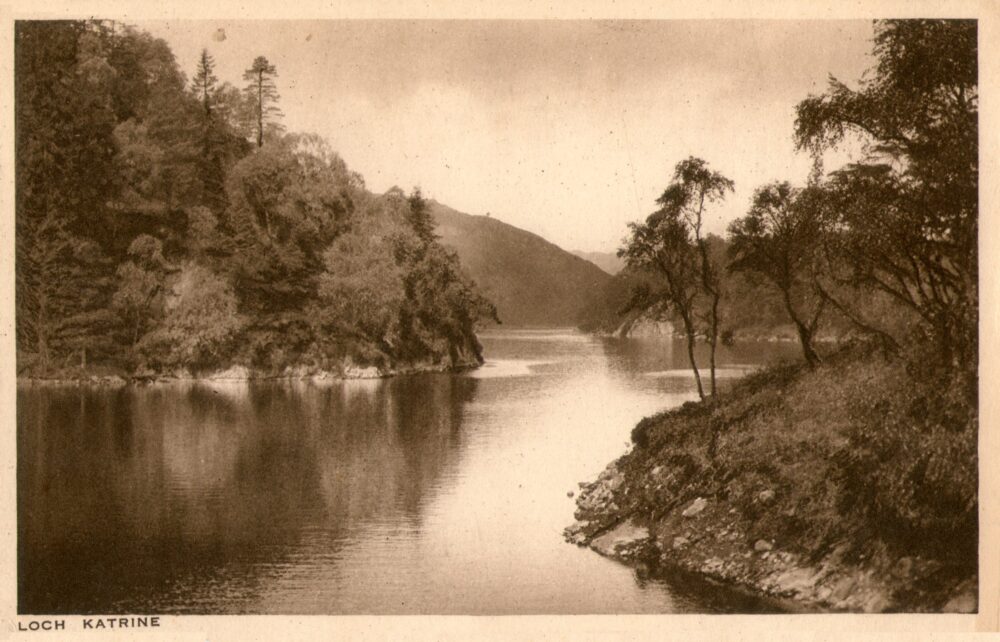 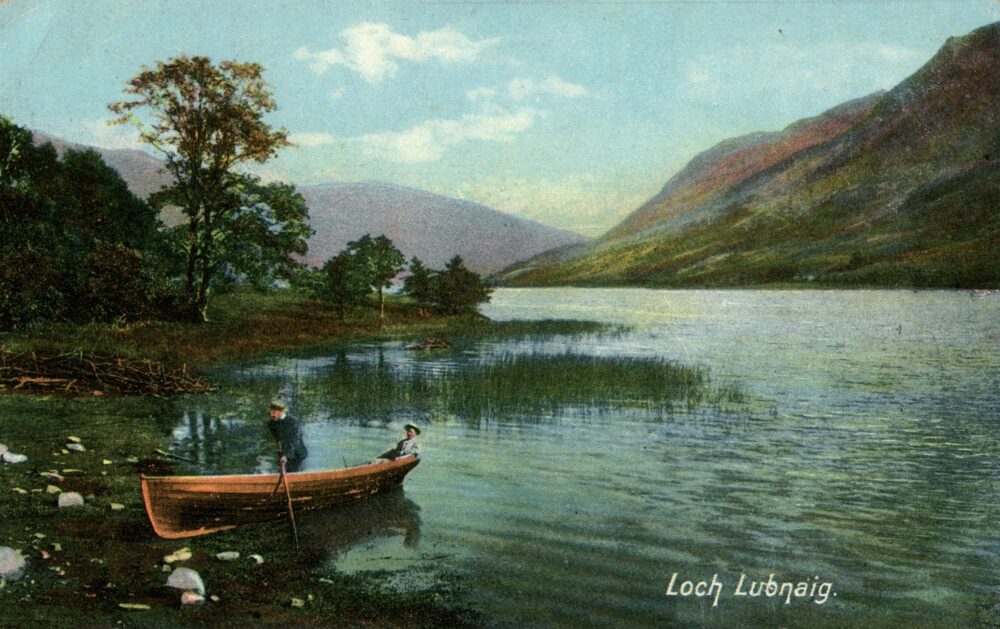 Loch Lubnaig is a small freshwater loch near Callander in the Stirling council area, Scottish Highlands. It lies in the former county of Perthshire. It is part of the Loch Lomond and The Trossachs National Park. The loch nestles in the space between Ben Ledi and Ben Vorlich. Fed by the River Balvaig from the north and drained by the Garbh Uisge to the south, Loch Lubnaig offers fishing from the shore while canoes can be rented at the north end.
Wikipedia. 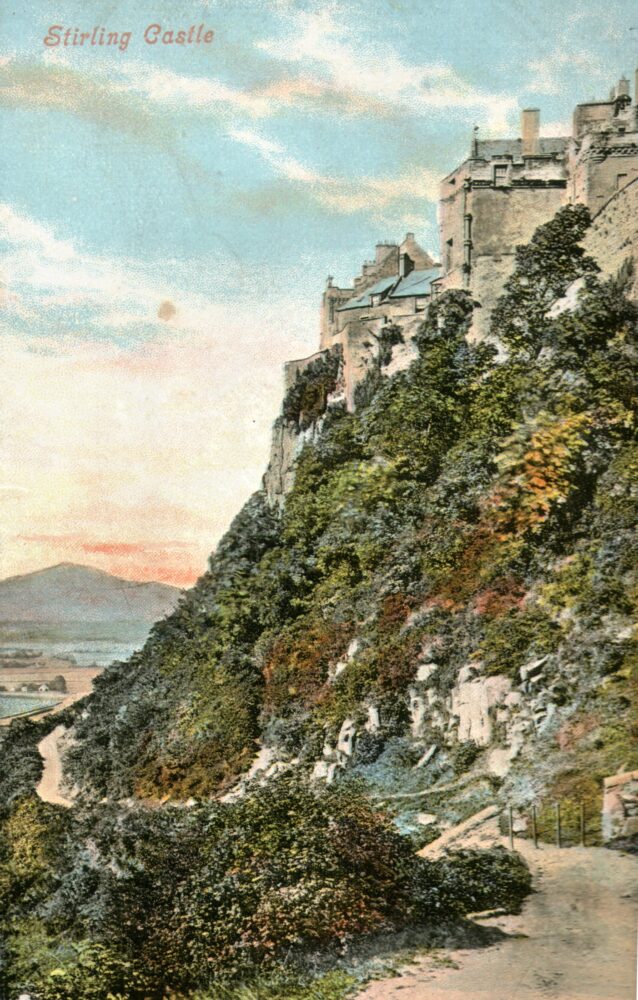 Stirling Castle was the key to the kingdom of Scotland, dominating a vast volcanic rock above the river Forth at the meeting point between Lowlands and Highlands. Its origins are ancient and over the centuries it grew into a great royal residence and a powerful stronghold. During the Wars of Independence, which were civil wars among the Scots as well as a struggle between Scotland and England, the castle changed hands eight times in 50 years. And it is no accident that famous battles such as Stirling Bridge and Bannockburn took place within sight of its walls. In times of peace Scottish royalty came to Stirling to enjoy its comforts, the superb hunting and to hold court – the castle was often the centre of government.
Stirling Castle

It is unlikely that there was not a stronghold on the castle rock in the period which intervenes between the Roman occupation and that of the attested history of Scotland. The rock, apart from its position with regard to the kingdoms, commands the Forth where that river is easily crossed, and, together with Dumbarton, the line of country between the Forth and the Clyde. The possession of a fort on it may easily have been the prize of many contests between the neighbouring peoples. It is as a border fortress that there is first certain knowledge of Stirling Castle. It was held by Alexander L, son to Malcolm Canmore and Margaret, who ruled from 1 107 to 1124 over Scotland north of the Forth and the Clyde. South of these rivers his brother and successor, David, was king. Alexander made and endowed the chapel of Stirling Castle ; this house and Dunfermline were probably his chief residences since he had no part in Edinburgh, and Stirling was the place of his death.
“Royal palaces of Scotland”, Helen Douglas-Irvine & Robert S. Rait,1911, p. 147 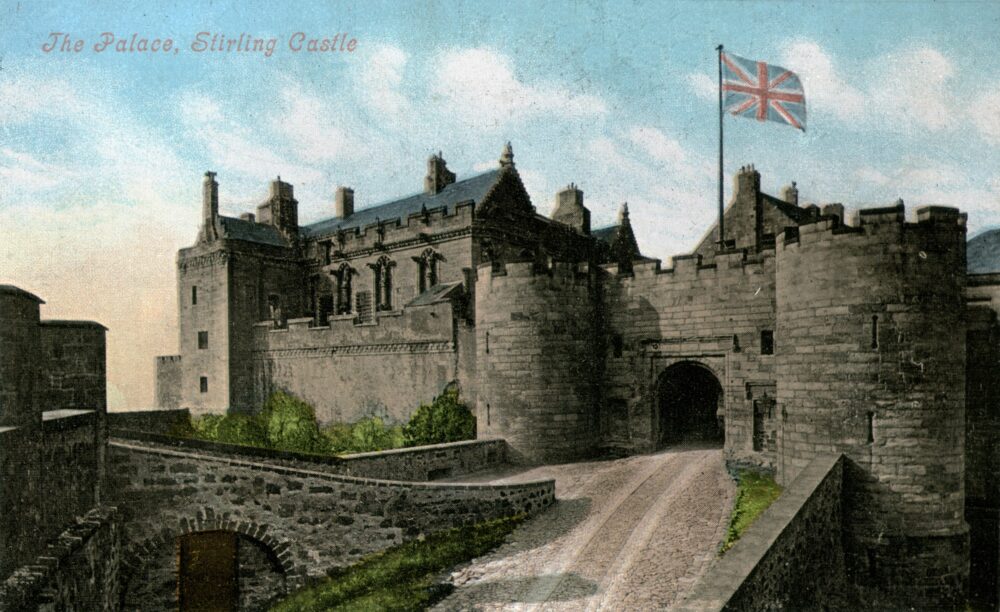 Stirling Castle was first mentioned around 1110, and many royal dramas unfolded here. Until the Union of the Crowns in 1603, almost every Scottish monarch had either lived in the castle, or been crowned or died here.
. . .
The three main enclosures within the castle are the:
outer defences, on the main line of approach
main enclosure, at the summit of the rock, bounded in the south by the Forework and encircled by a defensive wall
Nether Bailey, to the north. 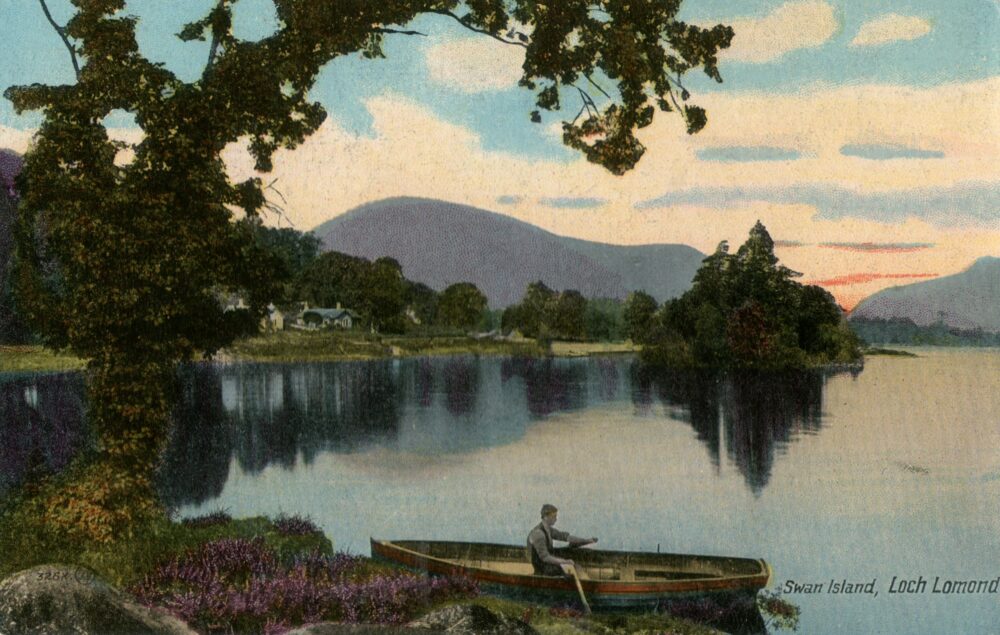 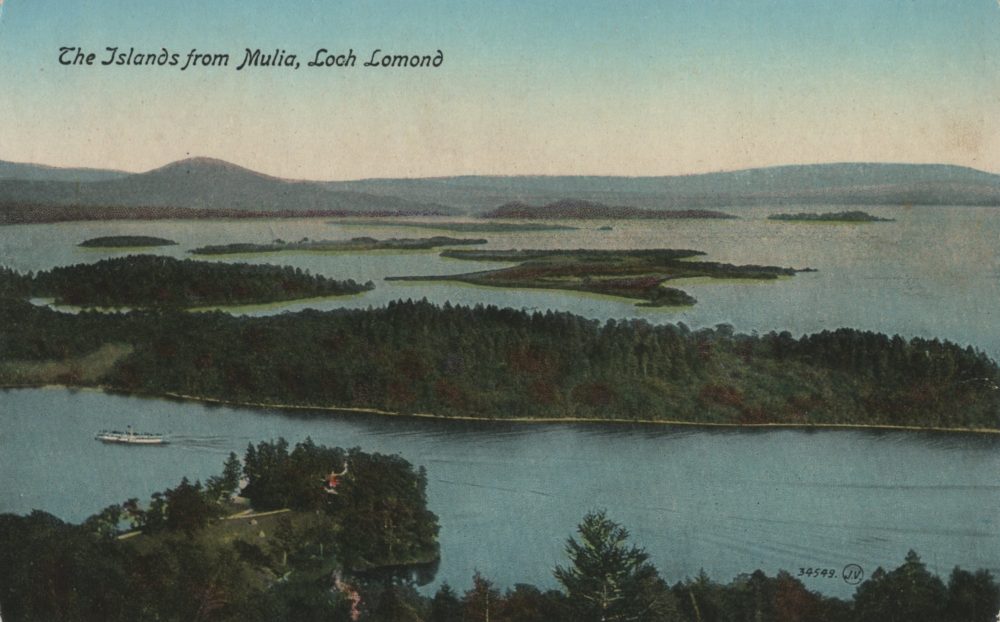 The Islands from Mulia, Loch Lomond. 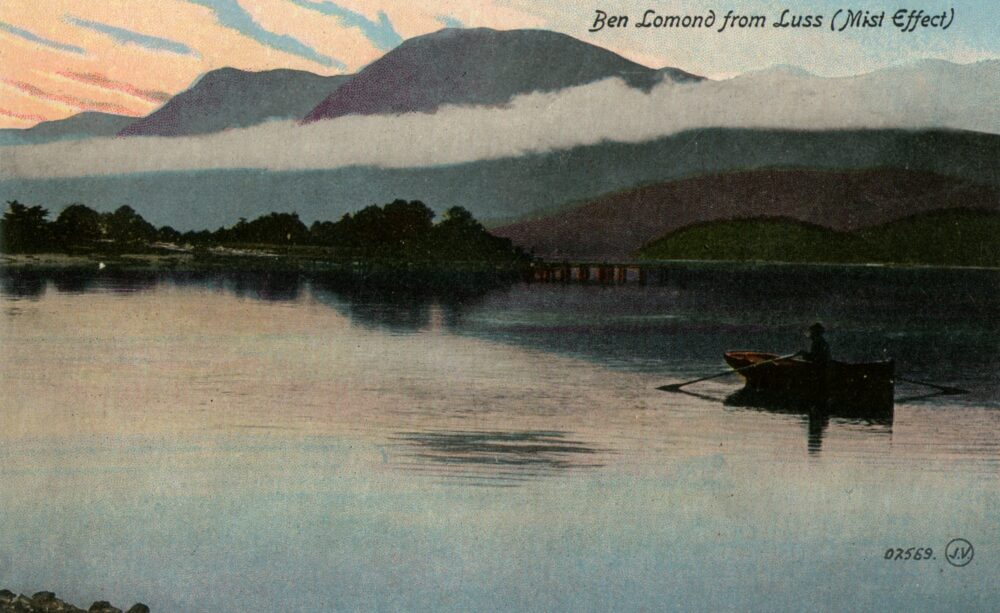