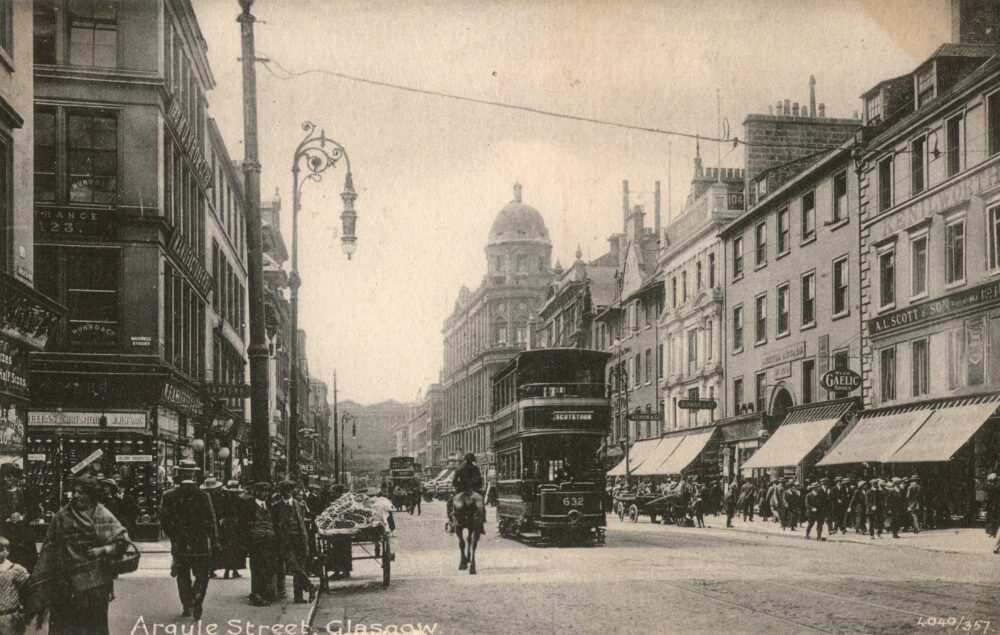 Glasgow Trams through the Years

Originally known as Westergait, Argyle Street led west from Trongate to the city’s West Port, the western gate out of the city’s walls. It was renamed in honour of the Duke of Argyll, some time after the removal of the West Port in 1751, as a result of the expansion of the city westward. The old West Port Well stood at the beginning of the street. On both sides of the street stood courts where businesses operated: Sysdney Court, Morrison’s Court, Moodies’s Court, Wellington Court, Wilson’s Court, Buchanan Court, Turner’s Court and Pratt’s Court.

Major reconstruction of the area at the turn of the 1970s which saw the construction of the Glasgow Inner Ring Road, the demolition of Anderston Cross and its replacement with the Anderston Centre complex changed the line of Argyle Street, the eastern half now terminating underneath the Kingston Bridge approach viaduct whilst the main vehicle route over the motorway runs along St. Vincent Street, leaving a 250-metre stretch of the western half of road in Anderston isolated as a cul de sac.
Wikipedia. 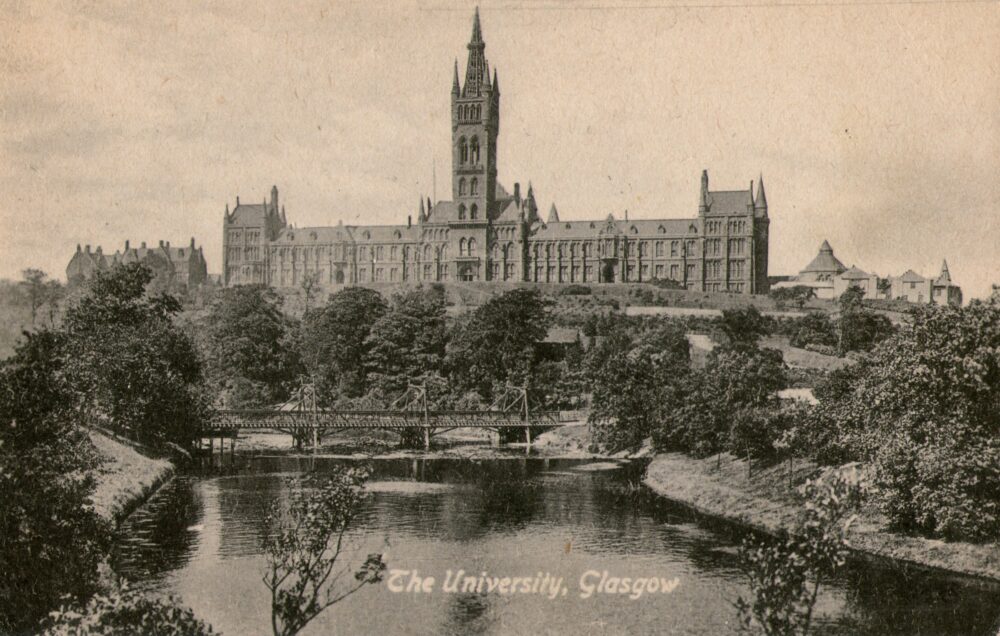 The University of Glasgow is a public research university in Glasgow, Scotland. Founded by papal bull in 1451, it is the fourth-oldest university in the English-speaking world and one of Scotland’s four ancient universities. Along with the universities of Edinburgh, Aberdeen, and St Andrews, the university was part of the Scottish Enlightenment during the 18th century. In common with universities of the pre-modern era, Glasgow originally educated students primarily from wealthy backgrounds; however, it became a pioneer[citation needed] in British higher education in the 19th century by also providing for the needs of students from the growing urban and commercial middle class.
. . .
In 1870, the university moved to a (then greenfield) site on Gilmorehill in the West End of the city, around three miles (5 km) west of its previous location, enclosed by a large meander of the River Kelvin. The original site on the High Street was sold to the City of Glasgow Union Railway and replaced by the College goods yard. The new-build campus was designed by Sir George Gilbert Scott in the Gothic revival style. The largest of these buildings echoed, on a far grander scale, the original High Street campus’s twin-quadrangle layout, and may have been inspired by Ypres’ late-medieval cloth hall; Gilmorehill in turn inspired the design of the Clocktower complex of buildings for the new University of Otago in New Zealand. In 1879, Gilbert Scott’s son, Oldrid, completed this original vision by building an open undercroft forming two quadrangles, above which is his grand Bute Hall (used for examinations and graduation ceremonies), named after its donor, John Crichton-Stuart, 3rd Marquess of Bute. Oldrid also later added a spire to the building’s signature gothic bell tower in 1887, bringing it to a total height of some 85 metres (279 ft). The local Bishopbriggs blond sandstone cladding and Gothic design of the building’s exterior belie the modernity of its Victorian construction; Scott’s building is structured upon what was then a cutting-edge riveted iron frame construction, supporting a lightweight wooden-beam roof.
Wikipedia. 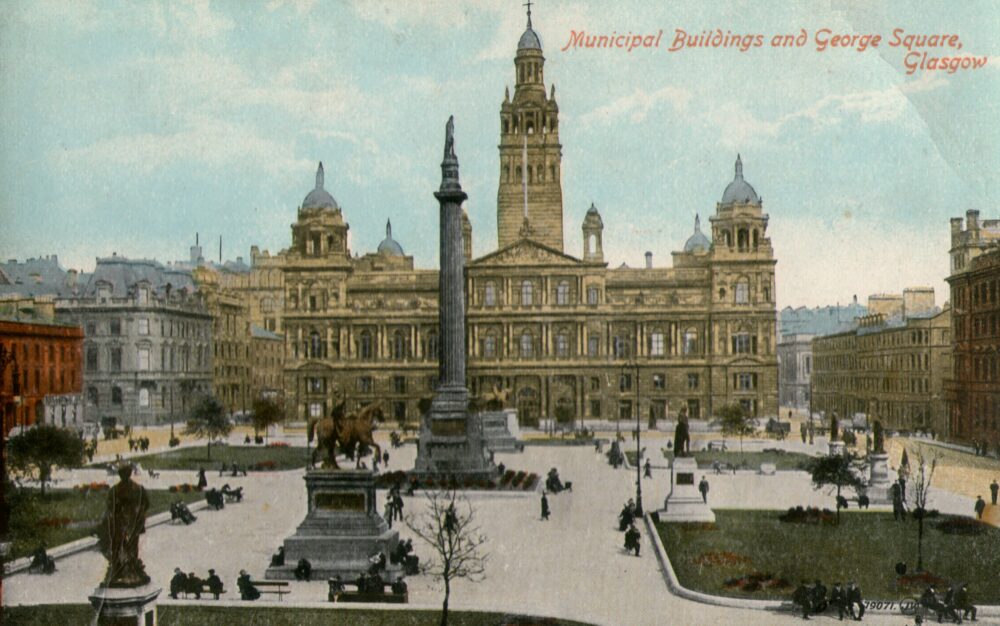 The City Chambers or Municipal Buildings in Glasgow, Scotland, has functioned as the headquarters of Glasgow City Council since 1996, and of preceding forms of municipal government in the city since 1889. It is located on the eastern side of the city’s George Square.
Wikipedia. 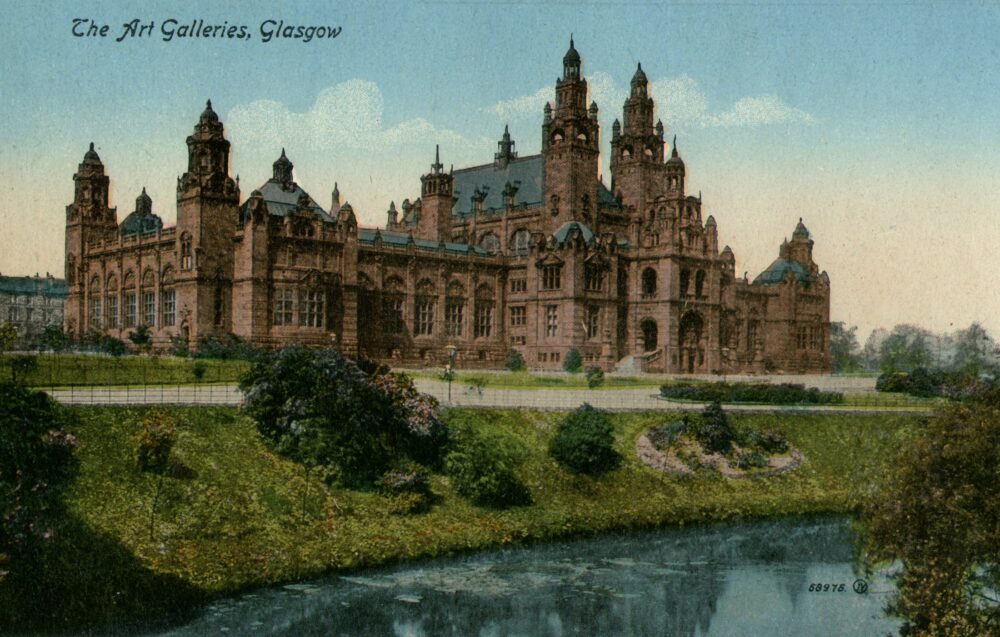 Google Street View (other side).

Kelvingrove Art Gallery and Museum is a museum and art gallery in Glasgow, Scotland. It reopened in 2006 after a three-year refurbishment and since then has been one of Scotland’s most popular visitor attractions. The museum has 22 galleries, housing a range of exhibits, including Renaissance art, taxidermy, and artifacts from ancient Egypt. . . . The construction of Kelvingrove was partly financed by the proceeds of the 1888 International Exhibition held in Kelvingrove Park. The gallery was designed by Sir John W. Simpson and E.J. Milner Allen and opened in 1901, as the Palace of Fine Arts for the Glasgow International Exhibition held in that year. It is built in a Spanish Baroque style, follows the Glaswegian tradition of using Locharbriggs red sandstone, and includes an entire program of architectural sculpture by George Frampton, William Shirreffs, Francis Derwent Wood and other sculptors.
Wikipedia.