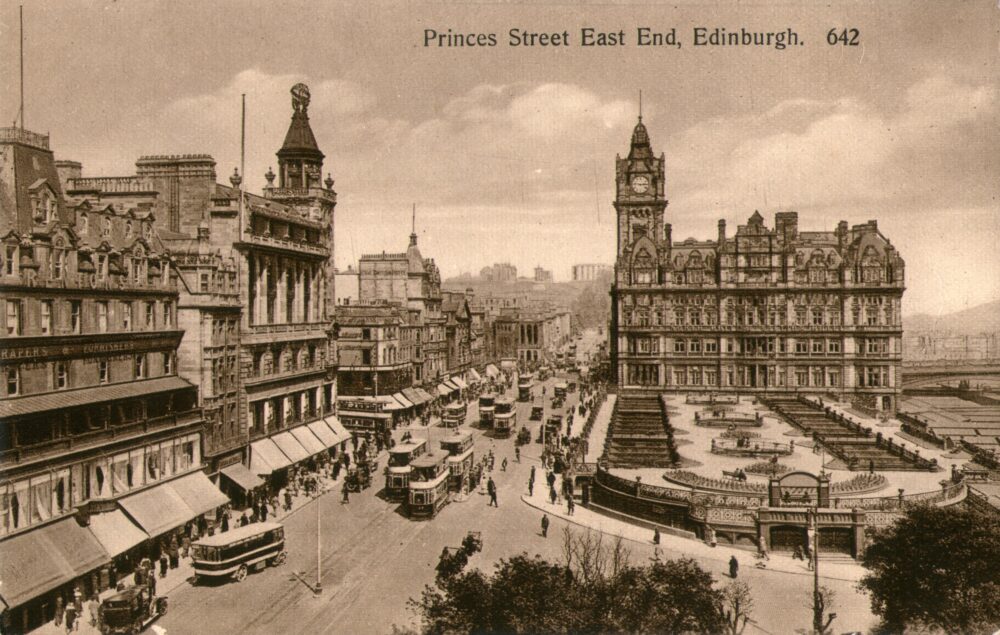 Princes Street is one of the major thoroughfares in central Edinburgh, Scotland and the main shopping street in the capital. It is the southernmost street of Edinburgh’s New Town, stretching around 1.2 km (three quarters of a mile) from Lothian Road in the west, to Leith Street in the east. The street has few buildings on the south side and looks over Princes Street Gardens allowing panoramic views of the Old Town, Edinburgh Castle, as well as the valley between. Most of the street is limited to trams, buses and taxis with only the east end open to all traffic.
Wikipedia. 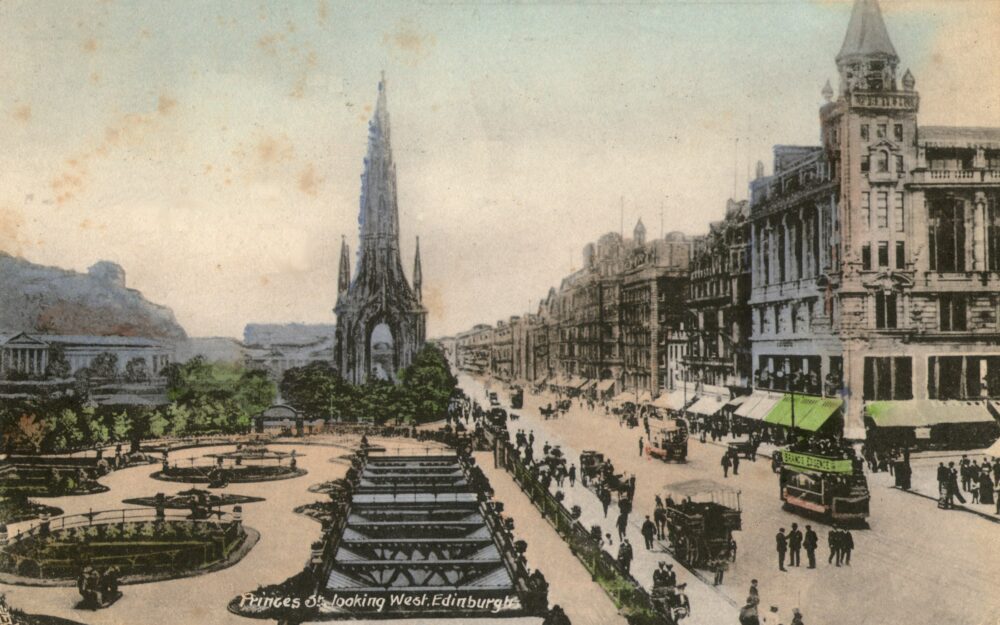 Princes St. looking West, Edinburgh
Postmarked 1918
Publisher: Raphael Tuck & Sons
On back:
PRINCES STREET is the finest street in Edinburgh. Practically a mile long, on one side it is lined with splendid shops and magnificent hotels, clubs and public offices, while on the other is a series of beautifully laid-out gardens decorated with statues and monuments, including the graceful Scott Monument (200 feet high) erected after designs by Kemp in 1840-44 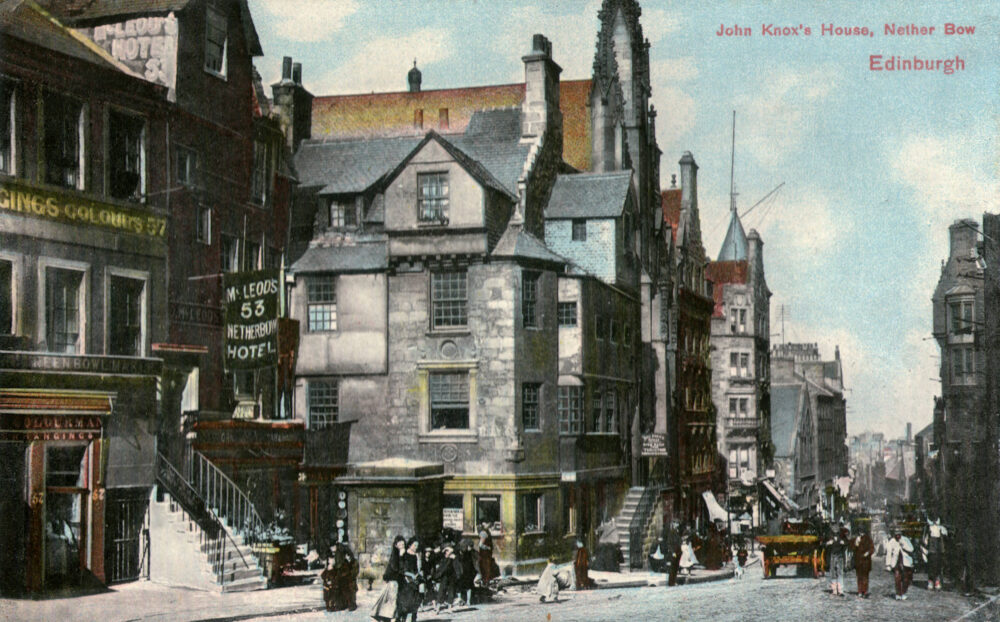 John Knox House, popularly known as “John Knox’s House”, is an historic house in Edinburgh, Scotland, reputed to have been owned and lived in by Protestant reformer John Knox during the 16th century. Although his name became associated with the house, he appears to have lived in Warriston Close where a plaque indicates the approximate site of his actual residence. The house itself was built from 1490 onwards, featuring a fine wooden gallery and hand-painted ceiling.  .  . . The visitor’s pamphlet states that the house “was Knox’s home only for a few months during the siege of Edinburgh Castle, but it is believed that he died here.” It appears to have become widely accepted as “John Knox’s House” from the mid-19th century onwards after Victorian writers like Robert Chambers and Sir Daniel Wilson had repeated the popular tradition, first recorded c.1800, of attaching Knox’s name to it. The house looked old enough to fit the description, but no research was able to establish the rights or wrongs of the claim.
Wikipedia. 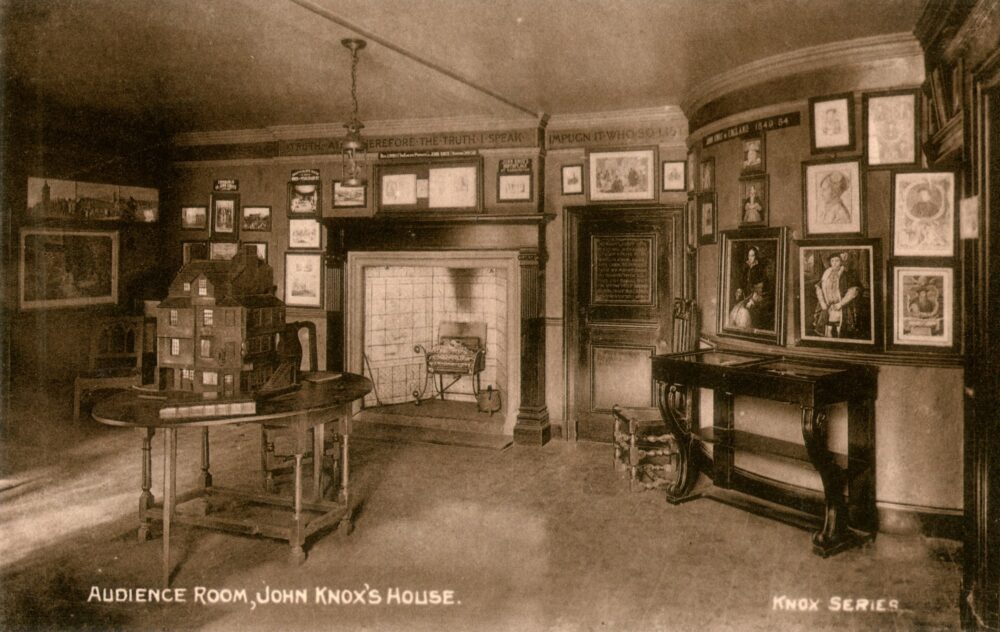 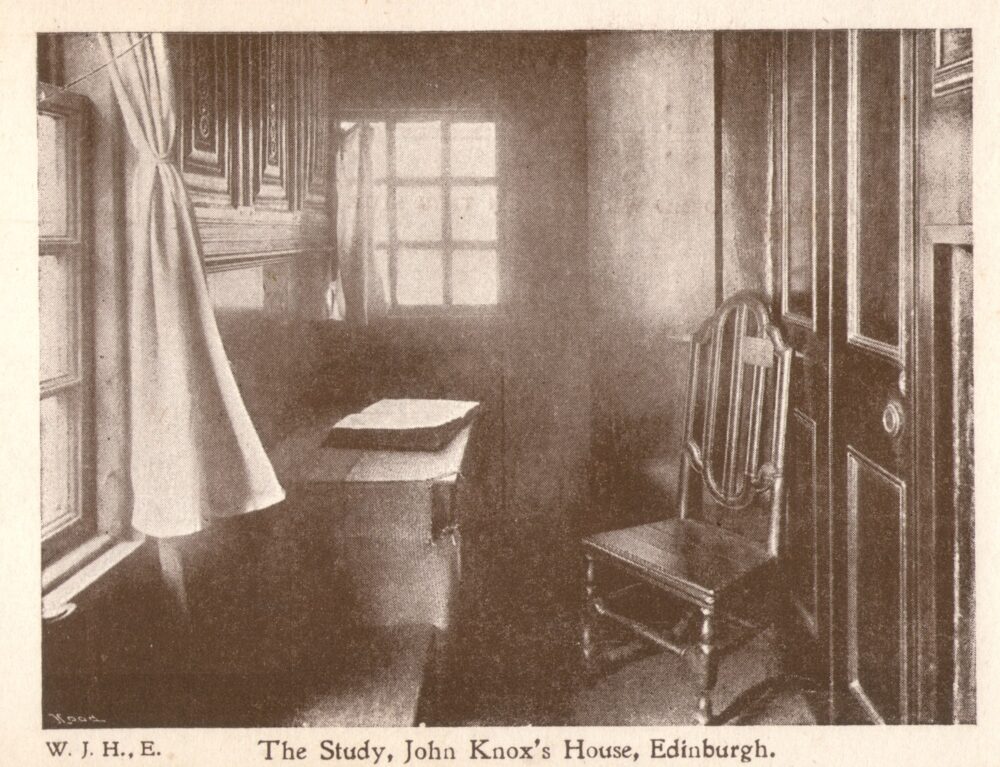 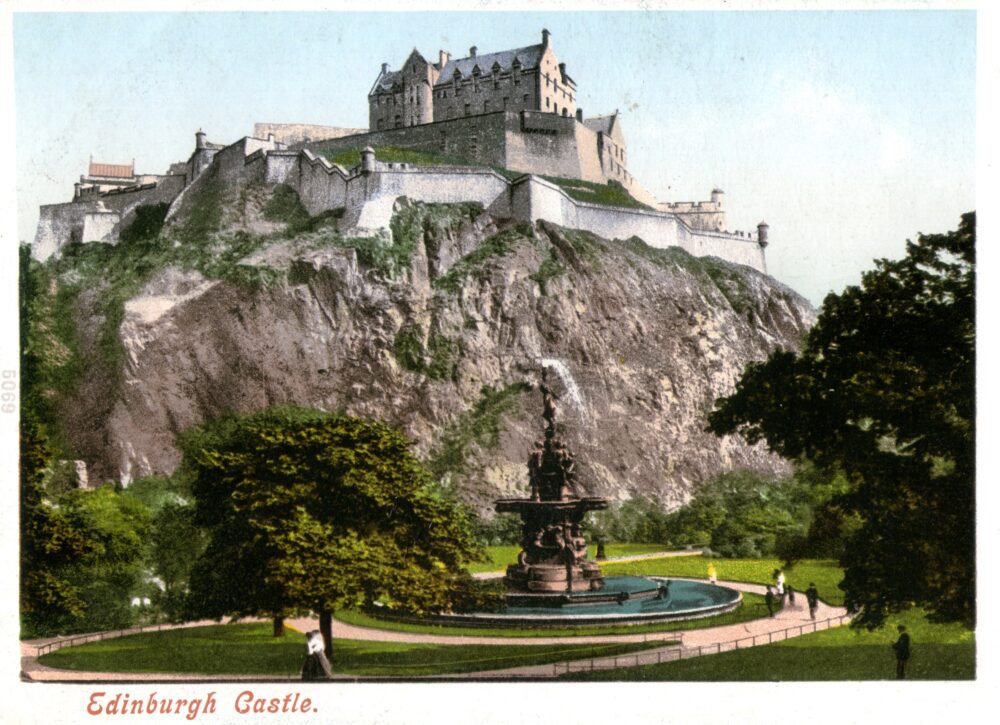 Set upon its mighty rock, Edinburgh Castle’s strategic advantage is clear. Seeing the site’s military potential, Iron Age people built a hill fort on the rock. Early medieval poetry tells of a war band that feasted here for a year before riding to their deaths in battle.

As well as guarding great moments in history, the castle has suffered many sieges. During the Wars of Independence it changed hands many times. In 1314, the Scots retook the castle from the English in a daring night raid led by Thomas Randolph, nephew of Robert the Bruce. The castle defences have evolved over hundreds of years. Mons Meg, one of the greatest medieval cannons ever made, was given to King James II in 1457. The Half Moon Battery, built in the aftermath of the Lang Siege of 1573, was armed for 200 years by bronze guns known as the Seven Sisters. Six more guns defend the Argyle Battery, with its open outlook to the north.
Edinburgh Castle: History of the castle 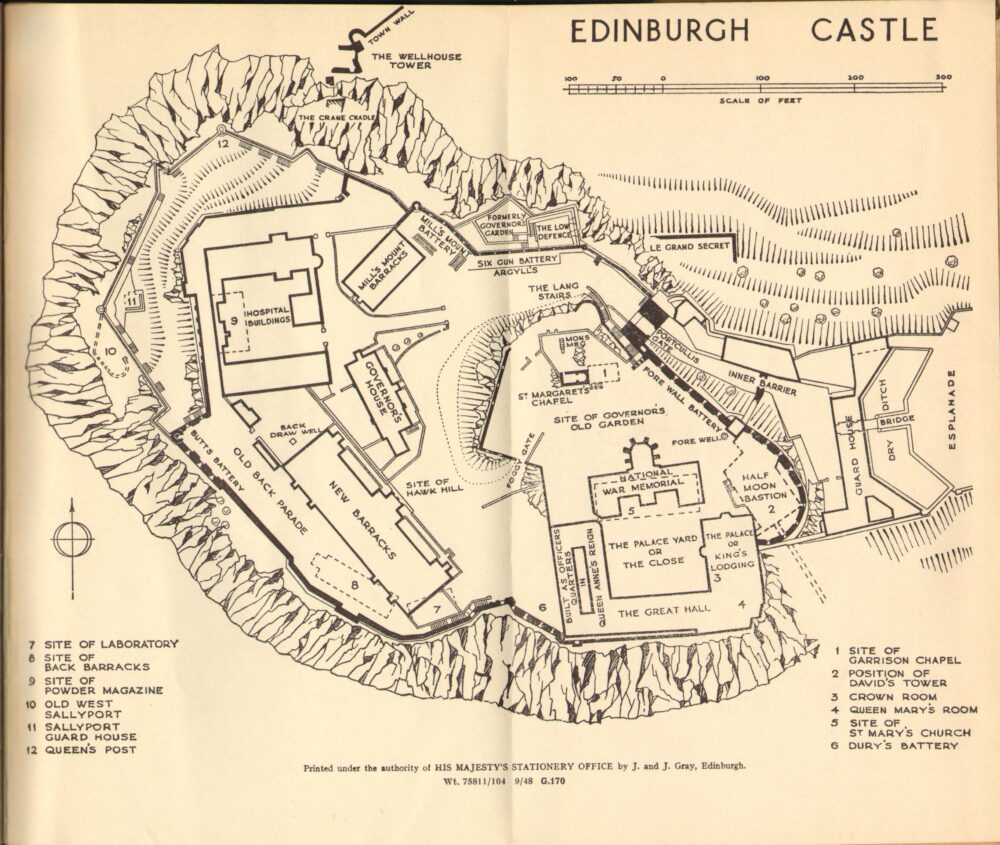 Plan of Edinburgh Castle. From The official guide-book published by HMSO, 1948 (from Wikimedia Commons)

Of this early castle the only remaining part is the Norman chapel of St. Margaret, that building of which the whole interior length is less than twenty-eight feet, and which yet is very impressive in its massiveness, its simplicity, and its gloom lightened only by small deep- set Norman windows. . . .The fourteenth-century castle, like others of the period, evidently consisted mainly of the strong keep, called Davy’s Tower. This is known from descriptions anterior to the siege of 1573 to have been sixty feet high, and to have contained a hall, a kitchen, chambers, and lofts. Its site was above the present Half Moon battery, and near the centre of it, behind a courtyard which surmounted the east wall of the castle.
. . .
The west side of the quadrangle is now also occupied by modern buildings. On the south side is the parliament hall, which has been carefully restored and is used as an armoury and military museum. It is a structure of noble proportions. The upper part and roof seem to date from the reign of James V., who must have replaced the roof constructed under James II. Many features have undergone alteration, as, for instance, the windows, which were originally large and mullioned, and probably gave light from both the north and the south walls. The vaults on which the hall was supported contained, as was customary, a kitchen and offices. It is said that they were also used as prisons, and one of them is called “Argyll’s dungeon.”
. . .
The hall communicated at its east end with the private apartments of the king in the old palace on the eastern side of the courtyard. This, in its present condition, is described as “a thing of shreds and patches . . . built with fragments from old buildings.” At its southern end, however, some fifteenth-century rooms remain. They were renovated in the reign of Mary, and include the room in which James VI. was born. Confined and dark as they are, it is no wonder that James IV. transferred his court to Holyrood.
“Royal palaces of Scotland”, Helen Douglas-Irvine & Robert S. Rait, 1911 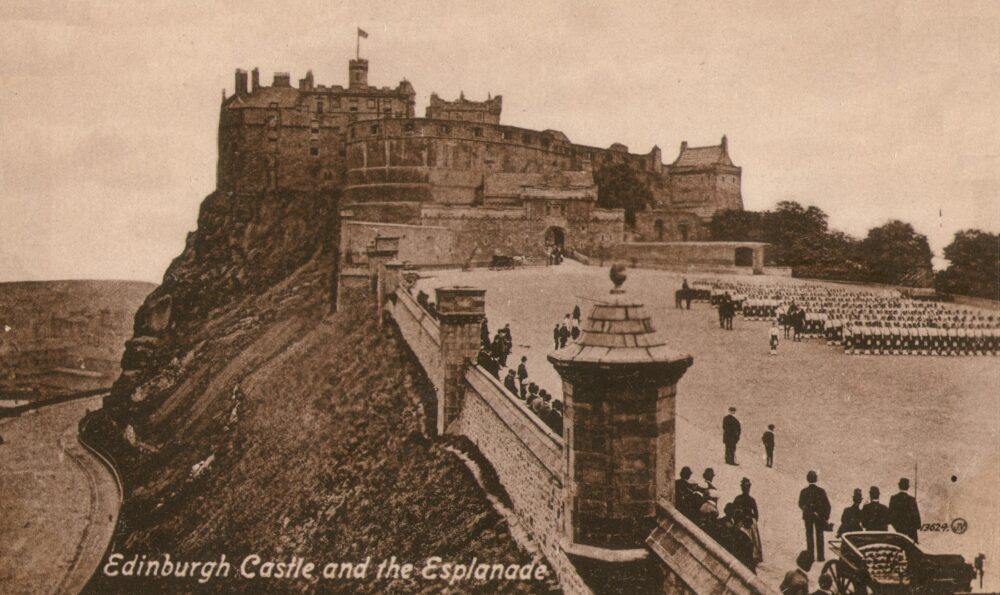 Edinburgh Castle and the Esplanade
On the back:
The Castle, which stands at a height of 443 feet above sea level, has an area at the top of about 7 acres. The records show that the Picts took possesion of it in the 7th century, and in the year 1004 Malcolm Canmore occupied it as a royal residence. In 1174 the castle was taken by the English, but was restored after 12 years.
Publisher: Valentine 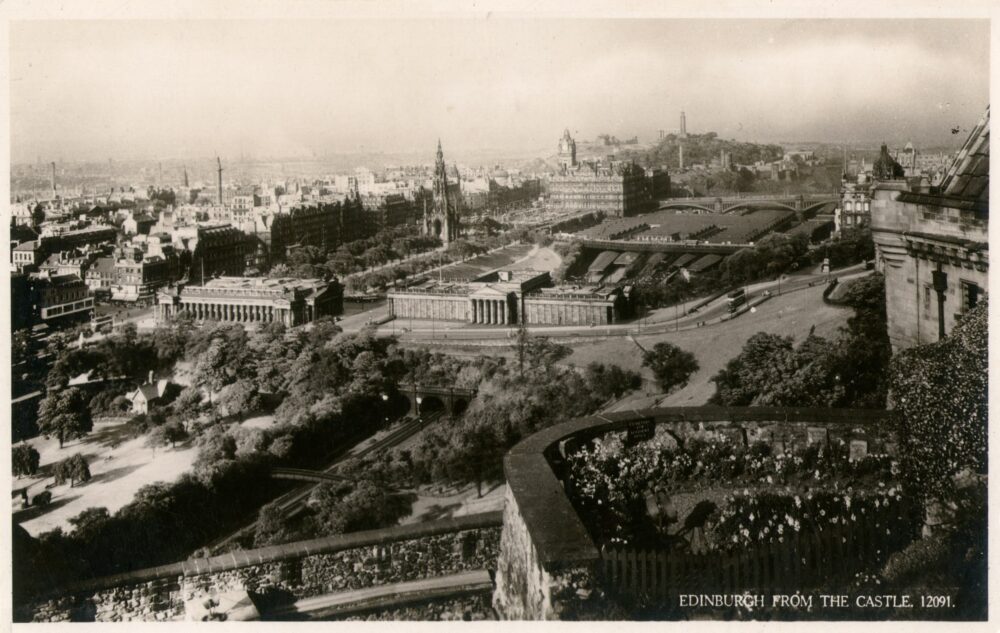 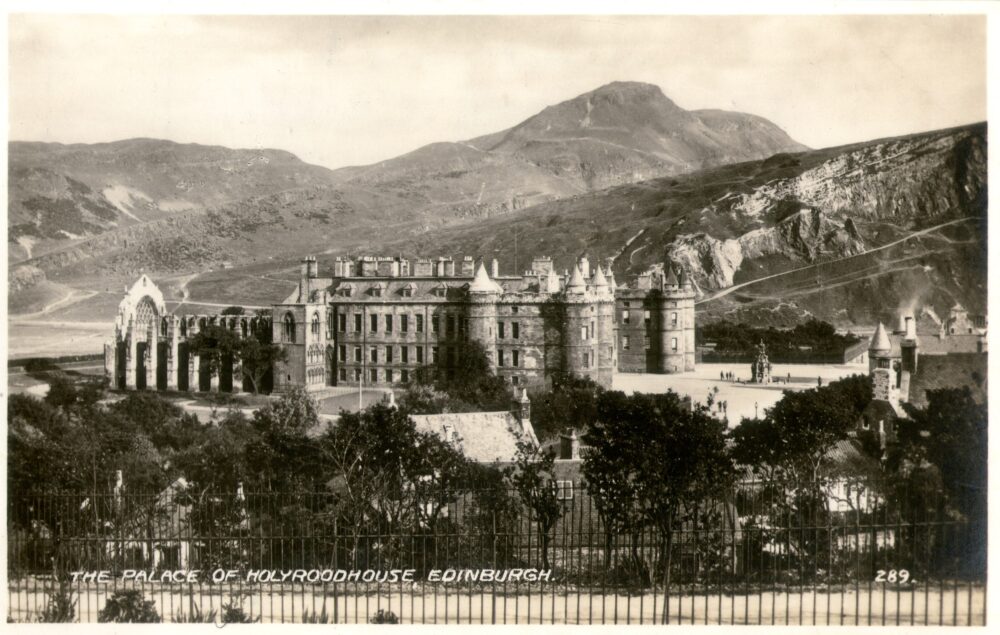 The Palace of Holyroodhouse, commonly referred to as Holyrood Palace or Holyroodhouse, is the official residence of the British monarch in Scotland, Queen Elizabeth II. Located at the bottom of the Royal Mile in Edinburgh, at the opposite end to Edinburgh Castle, Holyroodhouse has served as the principal royal residence in Scotland since the 16th century, and is now a setting for state occasions and official entertaining. . . .The palace as it stands today was built between 1671–1678 in a quadrangle layout, approximately 230 feet (70 m) from north to south and 230 feet (70 m) from east to west, with the exception of the 16th-century north-west tower built by James V. Sir William Bruce designed the 3-storey plus attic classical palace for Charles II, upon the restoration of the monarchy.
Wikipedia. 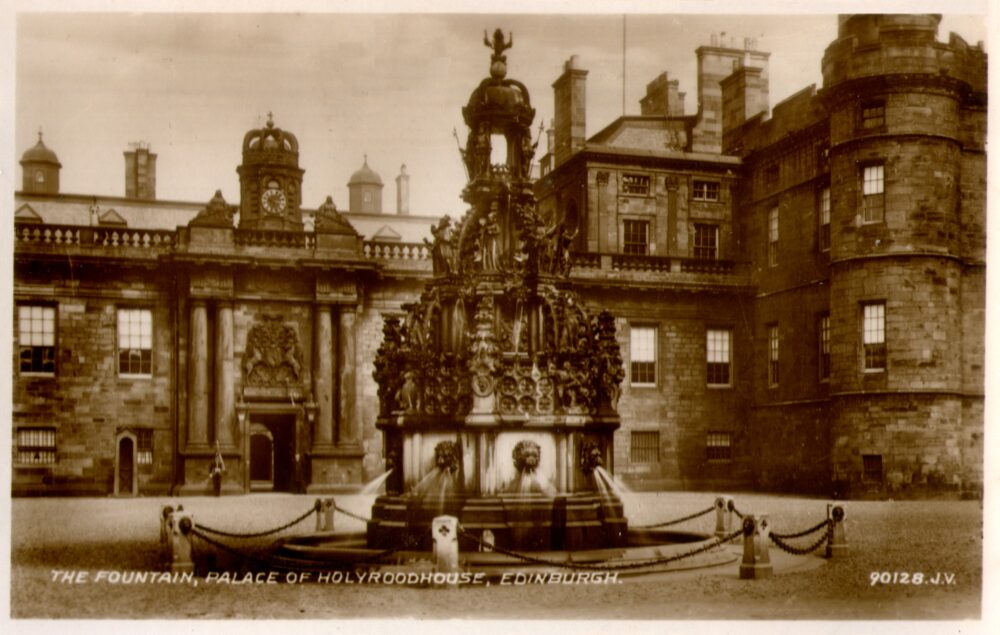 The sundial to the north of the palace was carved in 1633 by John Mylne, while the fountain in the forecourt is a 19th-century replica of the 16th-century fountain at Linlithgow Palace.
Wikipedia.

The Builder of 6 March 1858 reported that ‘Sir Benjamin Hall, before he quitted the post of Chief Commissioner of Works, directed that the old fountain of Linlithgow Palace, erected in the time of James II., and which is celebrated for having run with wine on high festive occasions, be restored to its pristine form; to be placed in front of Holyrood Palace.’ According to The Art-Journal of 1860, the design of the fountain was drawn from ‘fragments of the old fountain which stood in the quadrangle of Linlithgow Palace [restored by Historic Scotland in 2005], so that the fountain is more a reproduction than an original design, the details having been taken from the fragments found’.
Cranmore