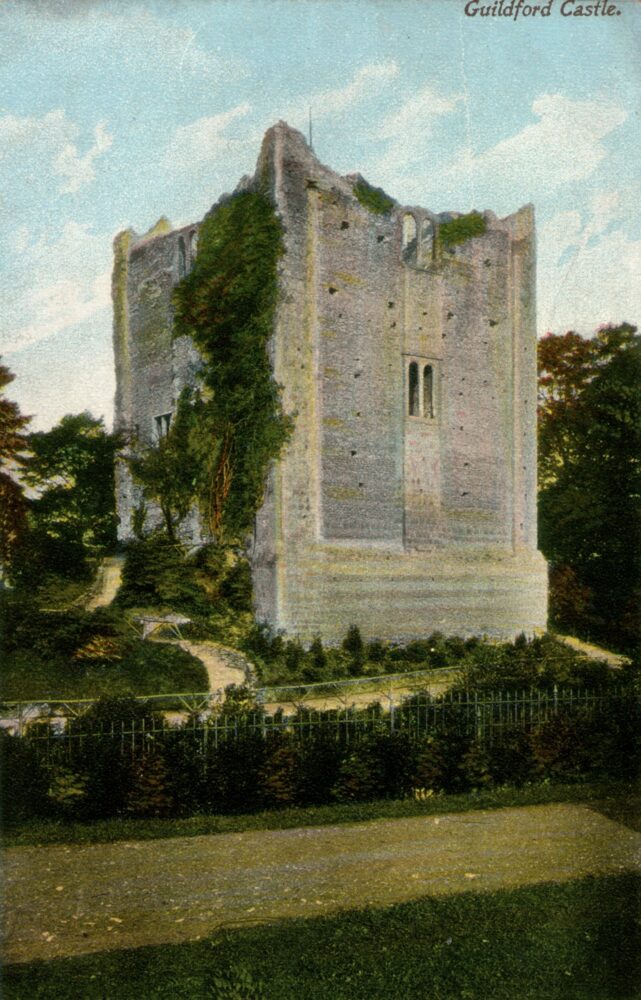 The fine Norman keep is almost all that remains of this extensive castle; it is built in rough Bargate stone rubble on the highest point of the slope, at the Saxon mound, which is 90 feet in diameter, and encircled with a broad and deep ditch; traces appear also of a second outer ditch, filled in. . . . The basement has been converted at some time into a kitchen with brickwork ; its entrance was 14 feet above the ground level, under a pointed arch, and was without a portcullis. The chief floor of state is 30 feet high, vaulted with three mural chambers, and lighted by round-headed windows. Its chief apartment is lined on one wall with an early Norman arcade, and seems to have been an oratory; on its walls are rude graffiti of biblical subjects. The staircase is in the N.W. angle from this stage to the roof. The second floor, 15 feet high, is lighted by four windows, having a small mural garderobe with its drain corbelled out from the wall, and lighted by a loop.
The Castles of England: their story and structure, vol. I, James. D. Mackenzie, 1897, p. 97 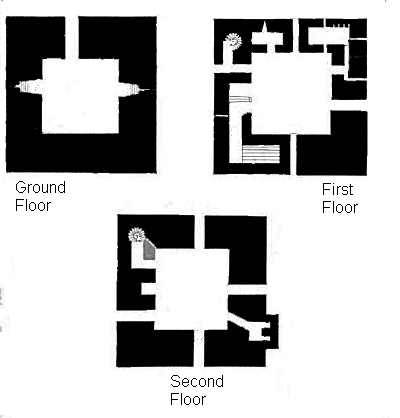 Plan of Guildford, 1825 (from Wikimedia Commons.)

Guildford Castle was probably raised in the immediate aftermath of the Battle of Hastings (1066) as one of a chain of fortifications intended to encircle London. At the time of the invasion Guildford was a Saxon Royal borough and dominated a major route through the South Downs and Surrey Hills connecting London and the South Coast. Furthermore it was also located in proximity to a fording point over the River Wey. For all these reasons Norman control of this key nodal point was essential and a castle was raised to overlook the site. . . . The castle took the form of an earth and timber motte-and-bailey fortification. The motte was topped with a timber palisade and tower whilst Inner and Outer baileys extended to the west. The precise configuration of the defences around the two baileys is unclear. Although the castle was overlooked by higher ground, this was well beyond the circa-200 metre range of projectile weapons of the era.

Guildford Castle remained a timber structure until the reign of Henry I (1100-35). Within the first few years of his reign he rebuilt the timber palisade around the motte into a polygonal shell Keep constructed from chalk. Initially the tower within remained a timber structure but, at some point during the twelfth century, this was replaced with the stone built Great Keep . . . In 1252 the castle suffered a major (accidental) fire and was gutted. Henry III commissioned John of Gloucester to conduct repair work and he made numerous improvements to the castle including building apartments for Prince Edward (the future Edward I) and Eleanor of Castile. However, by this stage the castle’s status as a Royal residence was being eclipsed by its role as the county gaol for both Surrey and Sussex with felons incarcerated within the Great Tower. In 1381 Lewes Castle took on greater responsibility for Sussex prisoners but Guildford continued as the county gaol for Surrey and remained in the role until 1544. Thereafter the castle was abandoned and quickly fell to ruin. In the early seventeenth century it was sold by James I to Francis Caster who attempted to convert the Great Keep into a residence. His plan failed and instead he built a new house within the bailey. Later the castle grounds were leased for agricultural purposes until 1885 when the site was purchased by the Guildford Corporation. They started the long process of restoration and also laid out the pleasure gardens that surround the Keep.
Castles Forts Battles

Around the 1130s a keep (tower) was added, again made of Bargate stone from nearby Godalming bonded with hard and durable mortar. The keep may have been built over part of the shell keep and its foundations went down to the chalk bedrock. The general form was quadrangular, its exterior dimensions being 47 feet (14 m) by 45.5 feet (13.9 m). The walls are about 10 feet (3.0 m) thick at the base and taper towards the top. The keep had a ground and first floor with the entrance located in the first floor to aid in defence. The keep was most likely used as a private apartment for the King. The ground floor was windowless. On the first floor there was a main chamber, a chapel, and wardrobe with latrine. A second floor was added shortly afterwards containing a two-seater latrine. The addition of the second floor made the keep over 70 feet (21 m) high. The roof of the building was made of lead and the inner walls were covered in plaster and then whitewashed.
Wikipedia.