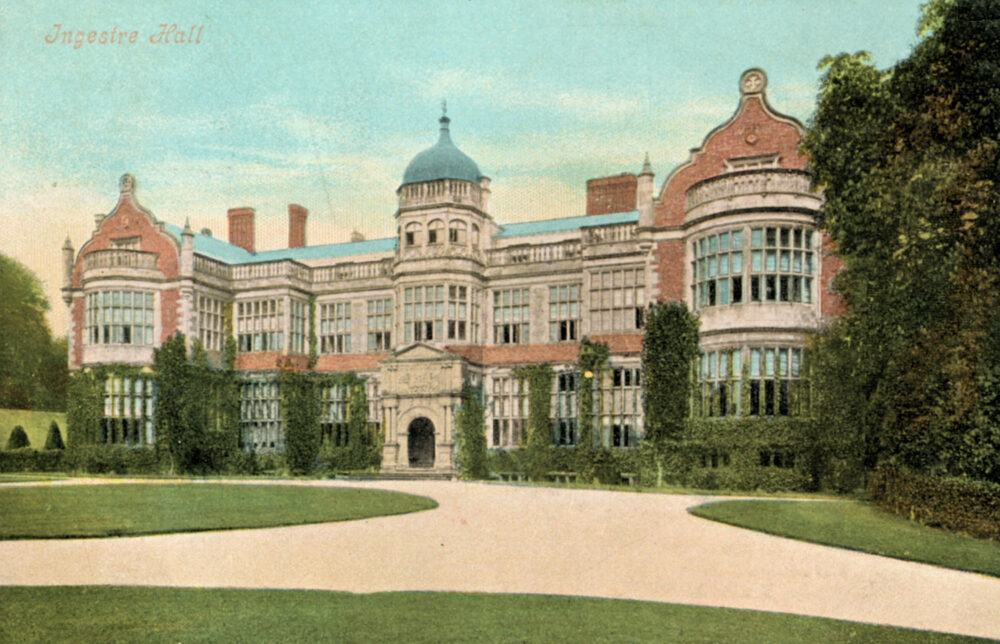 Ingestre Hall is a Grade II* 17th-century Jacobean mansion situated at Ingestre, near Stafford, Staffordshire, England. Formerly the seat of the Earls Talbot and then the Earls of Shrewsbury, the hall is now owned by Sandwell Metropolitan Borough Council and is in use as a residential arts and conference centre. History
Ingestre is mentioned in the Domesday Book. During the reign of Henry II the manor was owned by the de Mutton family. During the reign of Edward III the house passed to the Chetwynd family, through the marriage of heiress Isabel de Mutton and Sir John Chetwynd. Their descendants were raised to the peerage in 1733 as Baron Talbot and later in the century as Earl Talbot.

The imposing mansion was built in red brick, on the site of an earlier manor house, in 1613 for Sir Walter Chetwynd, (High Sheriff of Staffordshire in 1607). A later Walter Chetwynd, his grandson, was created Viscount Chetwynd in 1717. The daughter and heiress of the 2nd Viscount married Hon. John Talbot in 1748 and their son John Chetwynd-Talbot (who was later 3rd Baron Talbot, and from 1784 Viscount Ingestre and Earl Talbot) inherited the Ingestre estate. The house was renovated in the early 19th century by architect John Nash for the 2nd Earl, Charles Chetwynd-Talbot. In 1856 the 3rd Earl and 3rd Viscount Ingestre, Henry John Chetwynd-Talbot, succeeded a distant cousin to become the 18th Earl of Shrewsbury. The hall was badly damaged by fire and largely rebuilt in 1882. The rebuilding was to the designs of the Adelphi, London based architect, John Birch.
Wikipedia

Early C17 altered by Nash circa 1810 and largely rebuilt after fire in 1882. The restoration was on the original lines. Brickwith stone dressing and ornamental brick stacks. Stone mullioned windows. Large 2 storeyed bays on front and an imposing Jacobean porch. The interior is mostly modern.
Historic England

Ingestre Hall is pleasantly situated on a gentle declivity, sloping towards the river Trent, in a large and richly wooded park, which contains some remarkably fine beech and other trees. The house has a stately and venerable appearance. It is in the style which prevailed during the reigns of Elizabeth and James the First — having various projections, bay windows, and others with stone mullions. The north front was built by the present Earl, corresponding in character with the south front ; and like that also of brick and stone ; by which means several elegant rooms and a grand staircase have been added. The north side has a terraced flower-garden ornamented by fountains, a stone balustrade, &c, which add much to the elegance of this part of the building. The interior well agrees with the exterior — consisting of large and well-proportioned apartments, the principal of which is the Library, an elegant room occupying the western portion of the Mansion, containing a valuable collection of Books, placed in handsome oak cases, with pilasters, &c, of the Corinthian order ; also a beautiful marble fire-place. The Billiard-room is wainscotted with oak, one-third of its height, containing a variety of grotesque heads in small panels. The grand Staircase has a massive oak railing of arabesque character. The interior, however, has been greatly modernised ; and its chief attraction to the antiquary will arise from the Family Portraits, which possess considerable interest.
“The baronial halls, picturesque edifices, and ancient churches of England”, Samuel Carter Hall, 1845