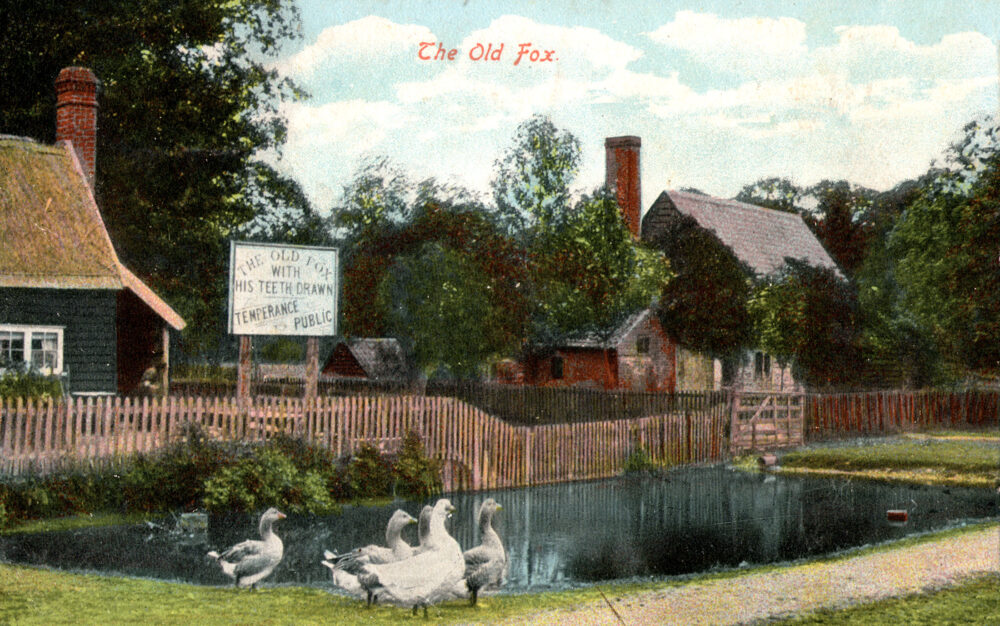 Originally a pub known as The Fox and then The Old Fox, after its license was withdrawn around 1900 it became a temperance house and tea cottage trading under the name of “The Old Fox With His Teeth Drawn”. It is now a private house. A public house also known as the “Old Fox” lies about 200 metres to the south west.
Historic England

The following comes from the Town and Country Talk column published in the Watford Observer on March 18, 1949.
. . .
Headed “Painless Extraction”, [the article] reads: “Nearby is another relic of bygone days. An old thatched cottage, standing on the side of a pond, bears the inscription ‘The Old Fox With His Teeth Drawn’. Once it bore the title of ‘The Old Fox’ and Mr Isaac Dalby, a 68-year-old smallholder, who lives next door, can well remember the happy days when a threepenny bit passed over the counter produced a pint of beer and ten cigarettes. Rumour has it, however, that some of the customers were not able to avoid the pond when coming out after an evening in the snug atmosphere of the inn, with its timbered roof and strong ale. In any case, the late Lord Knutsford (Mr Arthur Holland-Hibbert as he then was) acquired the property and ‘drew its teeth’ by turning it into a temperance cafe.”

There’s a little more on the place in A Souvenir of Bricket Wood”, an excellent booklet published by the Bricket Wood Society in 1982. In a section on public houses, the booklet states “at the end of the 16th Century there were over 500 officially licensed premises in hertfordshire. There were three types of public house – the inn (providing food, drink and lodging), the tavern (selling wine, sometimes food and lodging) and the alehouse, later beerhouse (selling ale or beer but no food or lodging).” It continues: “In the latter half of the 19th Century, there were seven licensed premises in the Bricket Wood area – The Chequers, The Green Man, The Blackboy, The Fox, The Young Fox, The Fox and Hounds and The Gate, four of which exist today.” Not even four any more, I’m afraid (but I suppose you could technically add Moor Mill to the list nowadays). Anyway, the “Souvenir” continues: “About the turn of the century, The Old Fox had its licence revoked and became known as The Old Fox With His Teeth Drawn; it served teas until about 50 years ago 9i.e. the early 1930s).
Watford Observer

In the late 19th Century there were two public houses within the bounds of the Conservation Area – ‘The Fox’ and ‘The Old Fox with His Teeth Drawn’. The former
remains a public house. Names have changed over the years and the progression of ‘fox’ names is slightly confusing…’The Old Fox with His Teeth Drawn’ began life as ‘The Fox’, then became ‘The Old Fox’ until its license was withdrawn in 1893. The current Old Fox P.H. began life as The Fox, but known as The ‘Young’ Fox and the two pubs competed for trade until A. Holland-Hibbert (later Viscount Knutsford), bought The Old Fox in 1893. He was a teetotaler and revoked its license in circa 1917 due to the abuse of drinking by the newly attracted in-comers. It then served teas (and sweets and flowers) as a Temperance House under the new name ‘The Old Fox With His Teeth Drawn’. Previously a single storey small scale weatherboarded building, it is now a private house, white rendered with rooms in the roof, and the only thatched property in Bricket Wood. Wrapping around the front of the house is an old pond, discernable in part on the Tithe Map, which is still inhabited by waterfowl.
Conservation Area Character Statement, St Albans City & District Council (PDF)