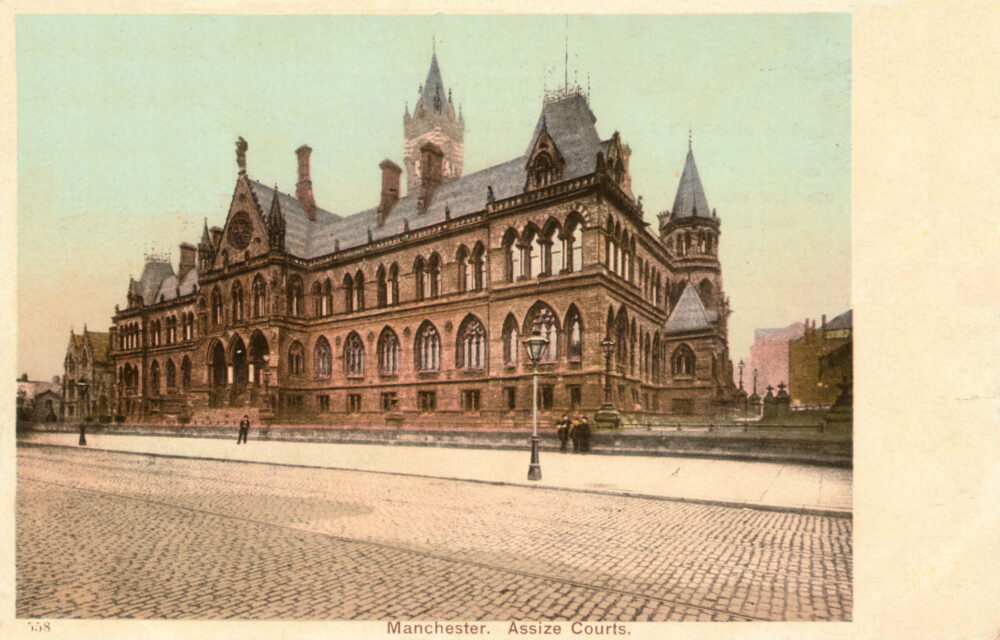 The Assize Courts was the first civic building to be constructed in Manchester after the town hall on King Street by Francis Goodwin in 1819. The Builder described it as the most important building outside Whitehall. Its design was the result of a competition in 1858 that attracted more than 100 entries. The competition was won by -Alfred Waterhouse whose design beat schemes from other renowned architects such as Thomas Worthington and Edward Walters. Waterhouse designed the building in the Venetian Gothic style; construction began in 1859 and was completed in 1864. The nearby 1862 Strangeways Prison was included in his design as part of the scheme; it is a Grade II listed structure. The building contained exterior sculptures by Thomas Woolner and the firm of O’Shea and Whelan. They depicted lawgivers from history, along with a “drunk woman”, a “good woman”, a scene of the Judgment of Solomon and carvings depicting different punishments throughout history. . . . The courts building was severely damaged in the Manchester Blitz in 1940 and 1941. It was said that everything was destroyed except the Great Ducie Street facade and the judges’ lodgings. Some war-damaged buildings in the city were repaired, but Manchester Assize Courts was demolished in 1957, soon after the assize court abolition. Some of the sculptures were preserved and incorporated into the new Crown Court building on Crown Square.
Wikipedia.

The fantastical skyline of the Assize Courts, the clever interior planning, the quality of finish and the rich detail in applied arts all made it an immediate hit. It was huge too, with the Great Hall a sensation that attracted international travel. Heavily damaged in World War II this stunning building was demolished while other shattered buildings such as the Free Trade Hall were restored and re-opened. Why that happened is explored in the film [on link]. There was city trickery at play.
Confidentials: Manchester

The interior of the great hall is most successful in its proportions. It has an open timber c hammer-beam’ roof, and a large pointed window with geometrical tracery, at each end. The doorways leading hence to the corridors and adjoining offices are studied with great care; and indeed the same may be said of every feature in the hall, from its inlaid pavement to the pendant gasaliers. The Civil Court and the Criminal Court (each capable of holding about 800 people) are respectively to the north-east and south-east of the hall. They are identical in size and arrangement, and are provided with the usual retiring rooms for judges and juries,

The barristers’ library is a picturesque and effective apartment, with a roof following the outline of a pointed arch, and divided into panels. The barristers’ corridor is lighted by a skylight, supported at intervals by arched ribs cusped and slightly decorated with colour. This, together with many other features in the building, represents with more or less success an attempt to invest modern structural requirements with ain artistic character which shall be Mediaeval in motive if not in fact. The trying conditions of this union cannot be too constantly kept in view by critics, who, applying an antiquarian test to such works as this at Manchester, proceed to condemn the association of features for which there is no actual precedent in old and genuine Gothic.
“A History of the Gothic Revival”, Charles L. Eastlake on the Victorian Web