Cambridge is formed from a variety of institutions which include 31 semi-autonomous constituent colleges and over 150 academic departments, faculties and other institutions organised into six schools. All the colleges are self-governing institutions within the university, each controlling its own membership and with its own internal structure and activities. All students are members of a college. Cambridge does not have a main campus, and its colleges and central facilities are scattered throughout the city.
Wikipedia. 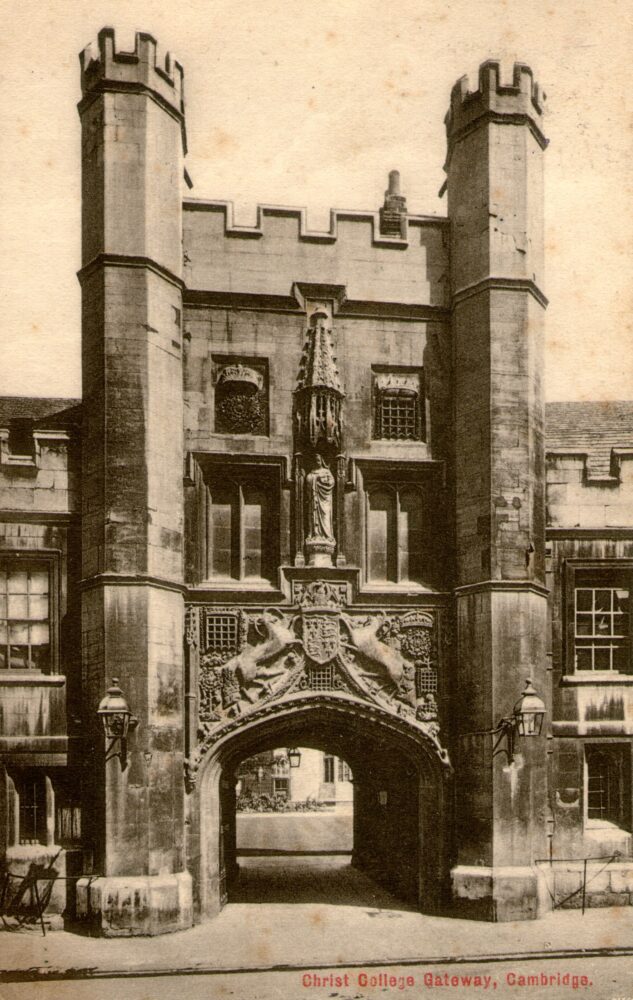 Christ’s College is a constituent college of the University of Cambridge. The college includes the Master, the Fellows of the College, and about 450 undergraduate and 170 graduate students. The college was founded by William Byngham in 1437 as God’s House. In 1505, the college was granted a new royal charter, was given a substantial endowment by Lady Margaret Beaufort, and changed its name to Christ’s College, becoming the twelfth of the Cambridge colleges to be founded in its current form. The college is renowned for educating some of Cambridge’s most famous alumni, including Charles Darwin and John Milton.
Wikipedia. 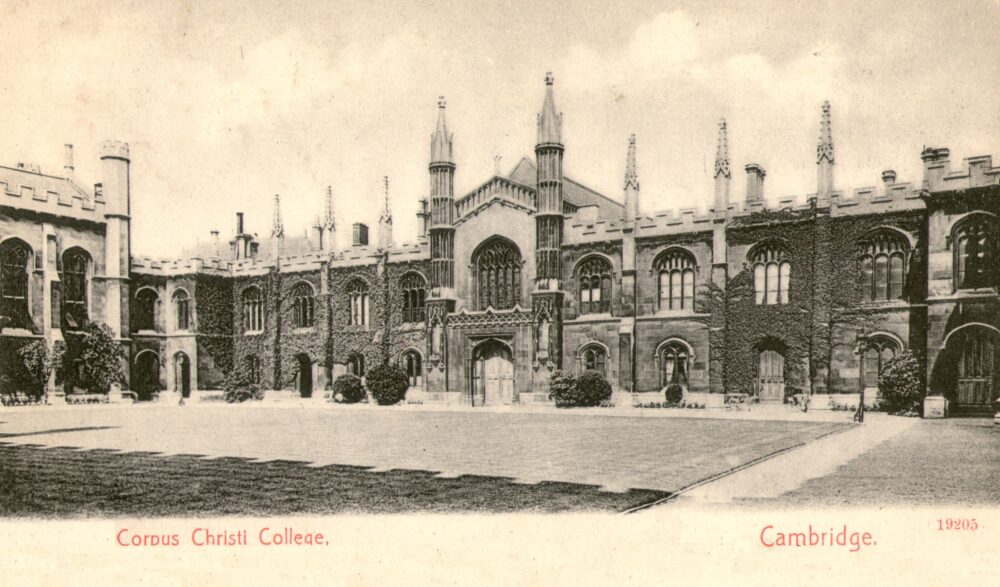 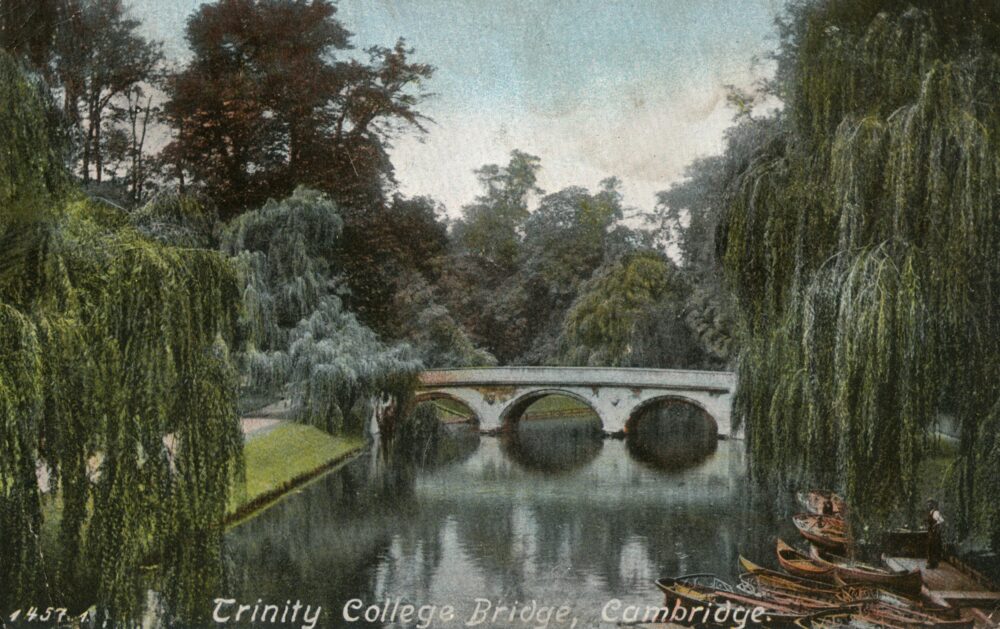 Trinity bridge is a stone built tripled-arched road bridge across the River Cam. It was built of Portland stone in 1765 to the designs of James Essex to replace an earlier bridge built in 1651 and is a Grade I listed building
Wikipedia. 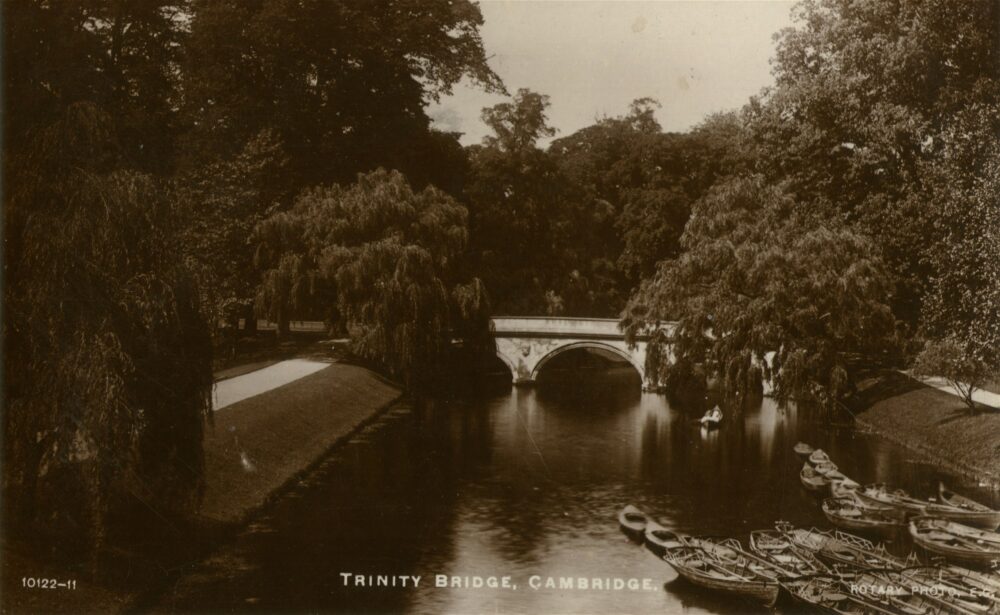 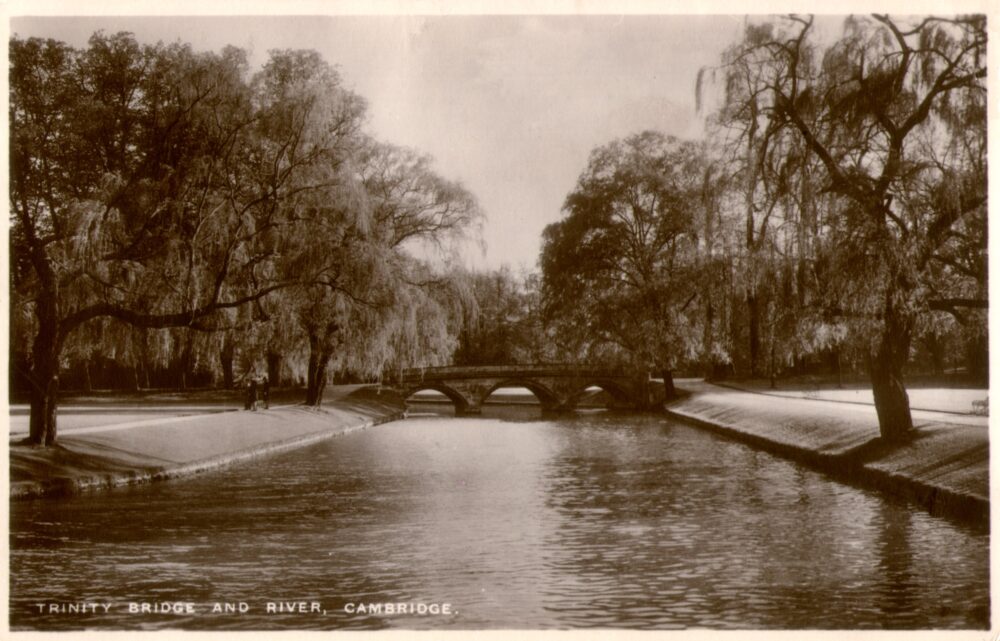 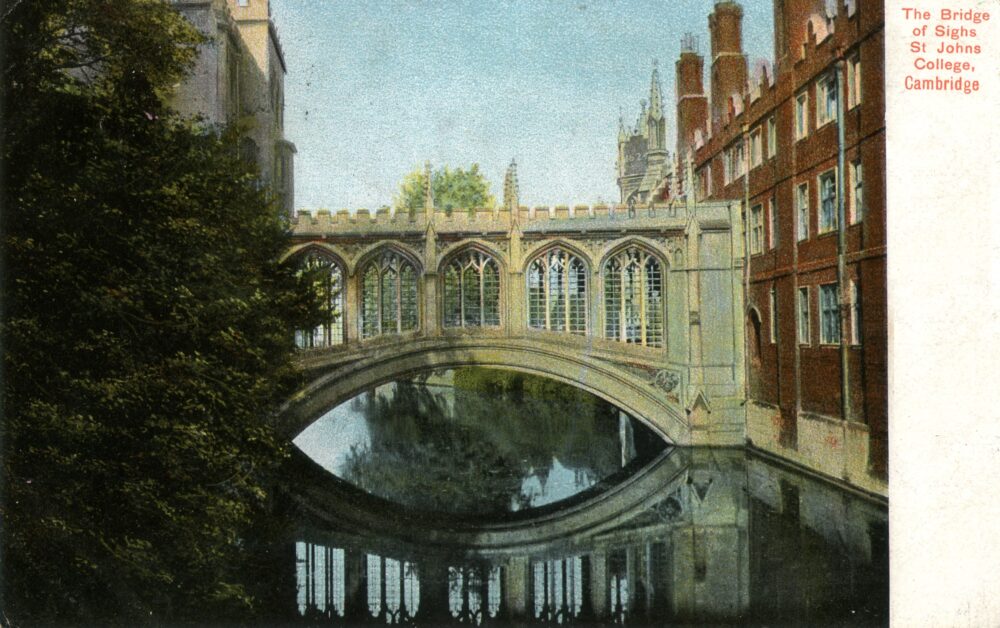 The Bridge of Sighs in Cambridge, England is a covered bridge at St John’s College, Cambridge University. It was built in 1831 and crosses the River Cam between the college’s Third Court and New Court. The architect was Henry Hutchinson.
Wikipedia. 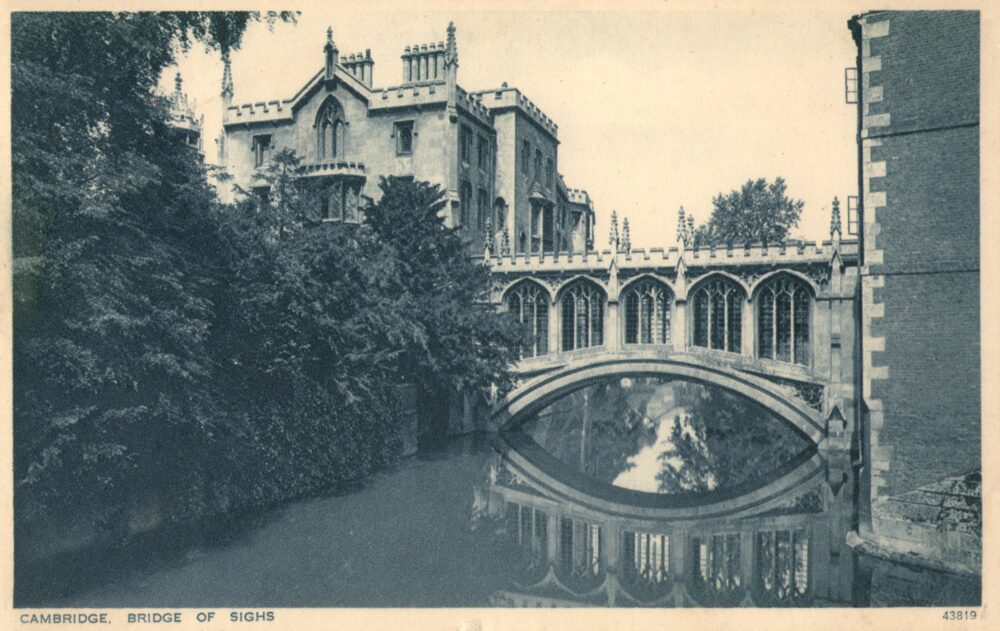 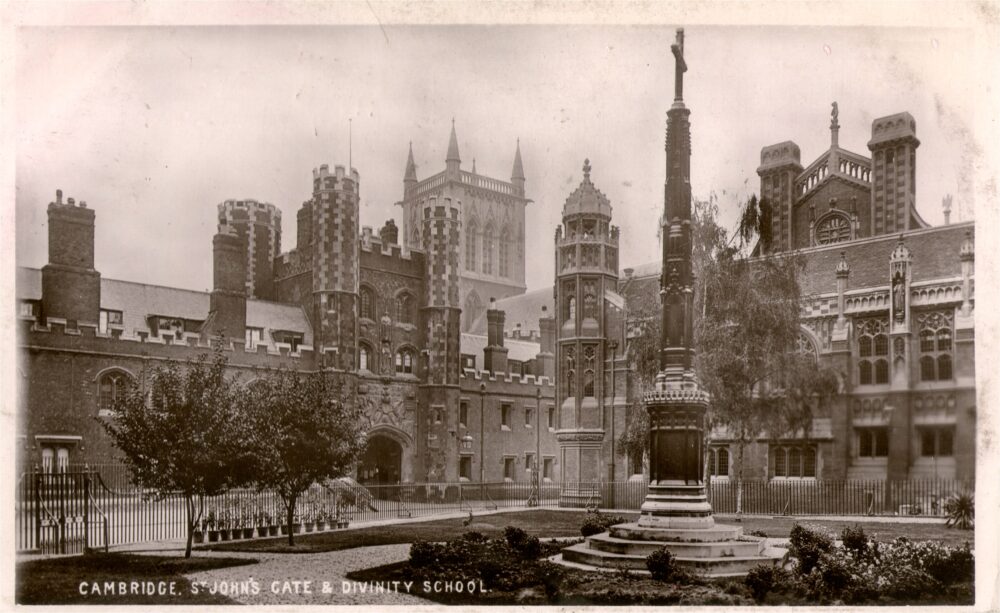 St John’s College is a constituent college of the University of Cambridge (the full, formal name of the college is the College of St John the Evangelist in the University of Cambridge) founded by the Tudor matriarch Lady Margaret Beaufort. . . . The site was originally occupied by the Hospital of St John the Evangelist, probably founded around 1200. The hospital infirmary was located where the east end of the current chapel now stands. By 1470 Thomas Rotherham Chancellor of the university, extended to the hospital the privileges of membership of the university. This led to St. John’s House, as it was then known, being conferred the status of a college. By the early 16th century the hospital was dilapidated and suffering from a lack of funds. Lady Margaret Beaufort, having endowed Christ’s College sought to found a new college, and chose the hospital site at the suggestion of John Fisher, her chaplain and Bishop of Rochester. However, Lady Margaret died without having mentioned the foundation of St John’s in her will, and it was largely the work of Fisher that ensured that the college was founded. He had to obtain the approval of King Henry VIII of England, the Pope through the intermediary Polydore Vergil, and the Bishop of Ely to suppress the religious hospital, by which time held only a Master and three Augustinian brethren, and convert it to a college.

The college received its charter on 9 April 1511. Further complications arose in obtaining money from the estate of Lady Margaret to pay for the foundation and it was not until 22 October 1512 that a codicil was obtained in the court of the Archbishop of Canterbury. In November 1512 the Court of Chancery allowed Lady Margaret’s executors to pay for the foundation of the college from her estates. When Lady Margaret’s executors took over they found most of the old Hospital buildings beyond repair, but repaired and incorporated the Chapel into the new college. A kitchen and hall were added, and an imposing gate tower was constructed for the College Treasury. The doors were to be closed each day at dusk, sealing the monastic community from the outside world. Over the course of the following five hundred years, the college expanded westwards towards the River Cam, and now has twelve courts, the most of any Oxford or Cambridge College.
Wikipedia. 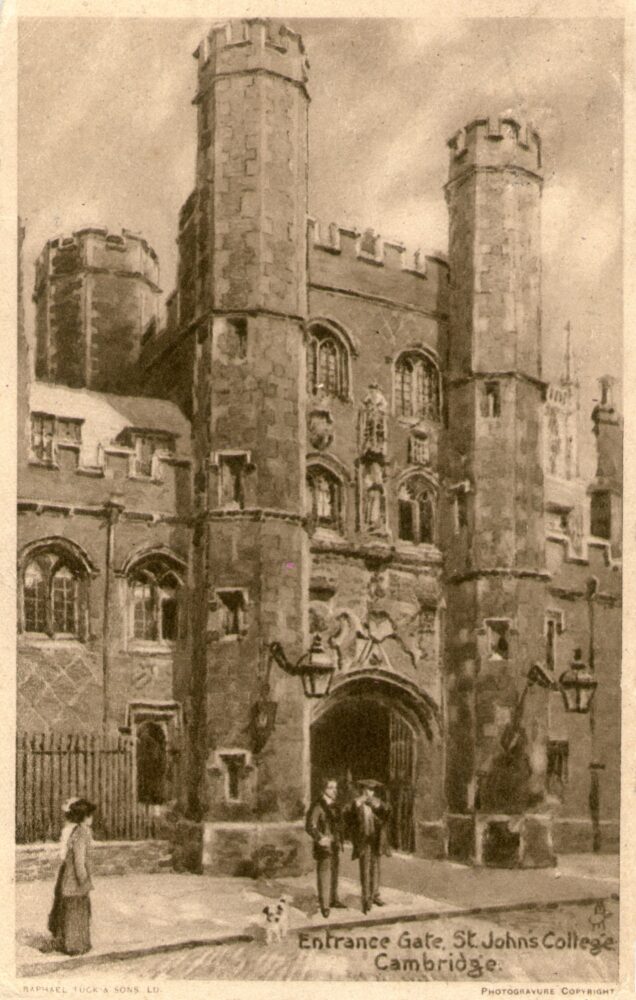 Entrance Gate. St John’s College. Cambridge.
On back:
Entrance Gate, St. John’s College.–This is the second largest College in Cambridge, and was founded in 1511 on the site of St. John’s Hospital, which dated from the 12th century. Part of the College buildings overlook the river, which is spanned by two bridges belonging to St John’s, one the famous “Bridge of Sighs.”
Postmarked 1931.
Publisher: Raphael Tuck & Sons 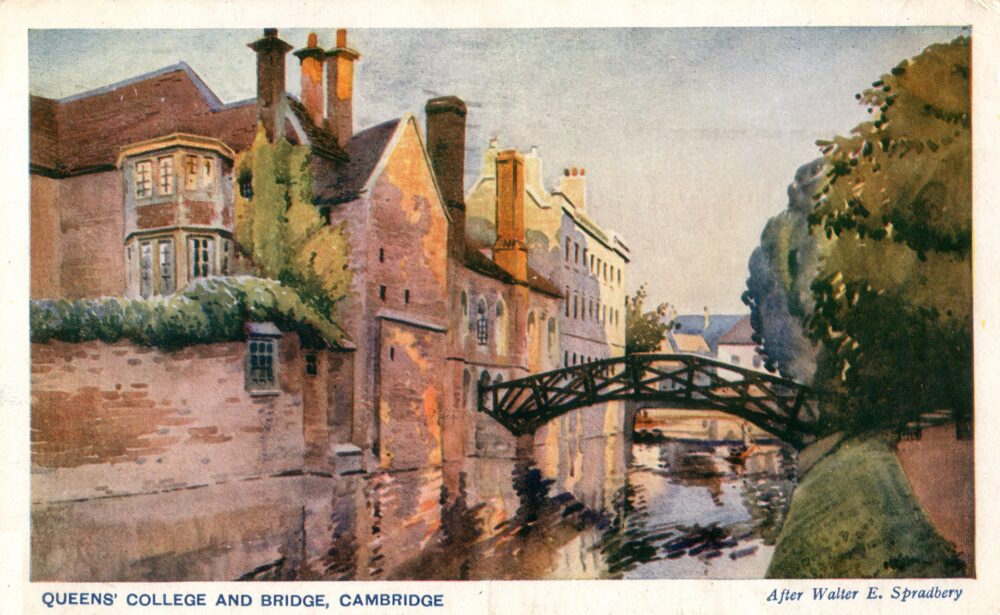 Queens’ College is a constituent college of the University of Cambridge, England. Queens’ is one of the oldest, largest and most prestigious colleges of the university, founded in 1448 by Margaret of Anjou, and has some of the most recognisable buildings in Cambridge. The college spans the river Cam, colloquially referred to as the “light side” and the “dark side”, with the Mathematical Bridge connecting the two.
Wikipedia. 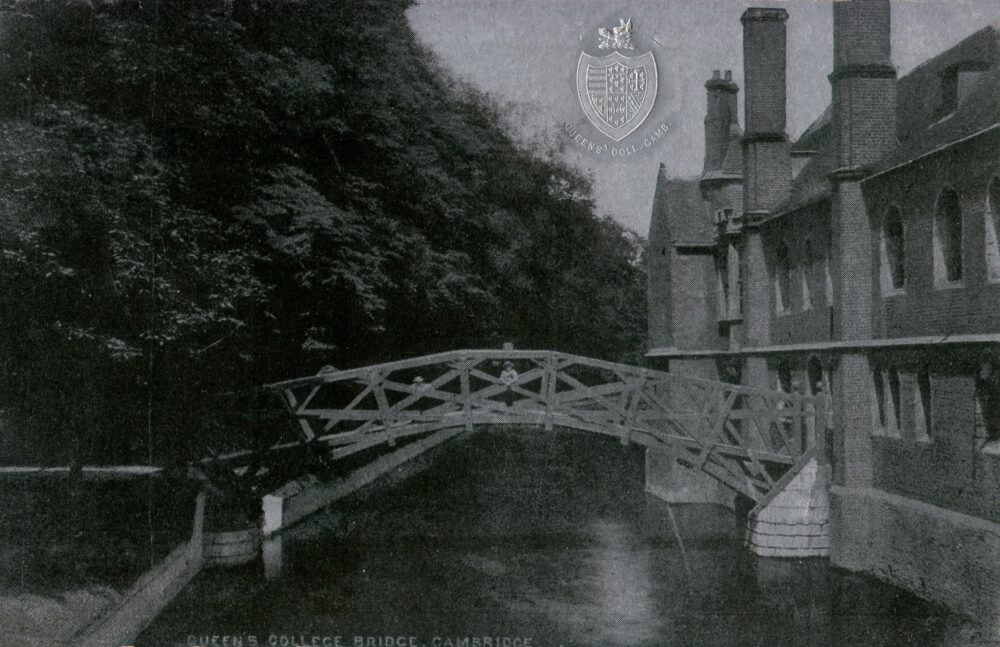 “Alumino” card with a metallic sheen, particularly on bridge and supports. This has been lost in scan. 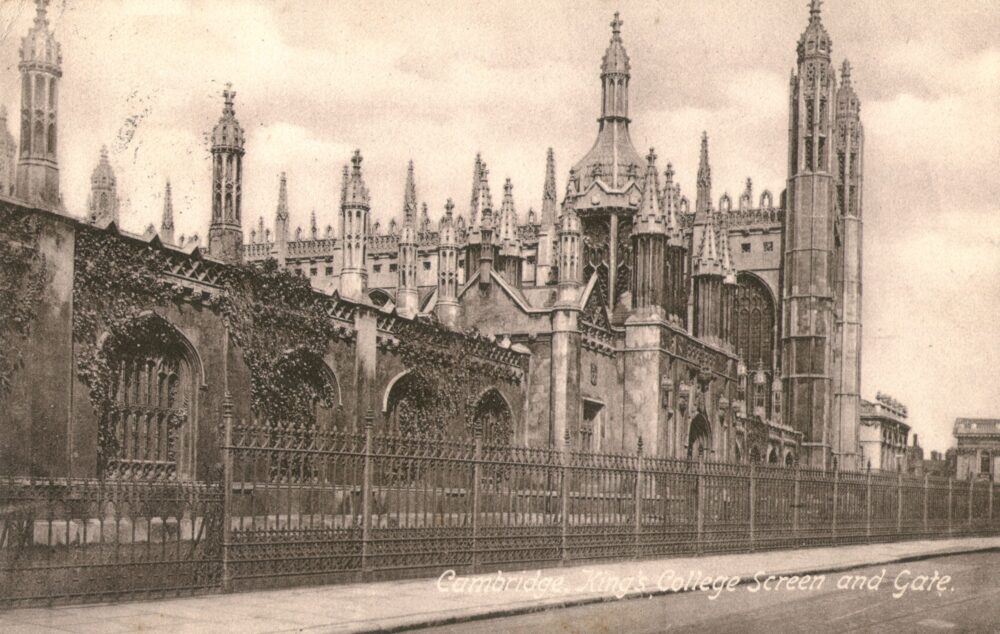 King’s College is a constituent college of the University of Cambridge in Cambridge, England. Formally The King’s College of Our Lady and Saint Nicholas in Cambridge, the college lies beside the River Cam and faces out onto King’s Parade in the centre of the city. King’s was founded in 1441 by Henry VI soon after he had founded its sister college in Eton. However, the King’s plans for the college were disrupted by the Wars of the Roses and the resultant scarcity of funds, as well as his eventual deposition. Little progress was made on the project until in 1508 Henry VII began to take an interest in the college, most likely as a political move to legitimise his new position. The building of the college’s chapel, begun in 1446, was finally finished in 1544 during the reign of Henry VIII.

King’s College Chapel is regarded as one of the greatest examples of late Gothic English architecture. It has the world’s largest fan vault, while the chapel’s stained-glass windows and wooden chancel screen are considered some of the finest from their era.
Wikipedia. 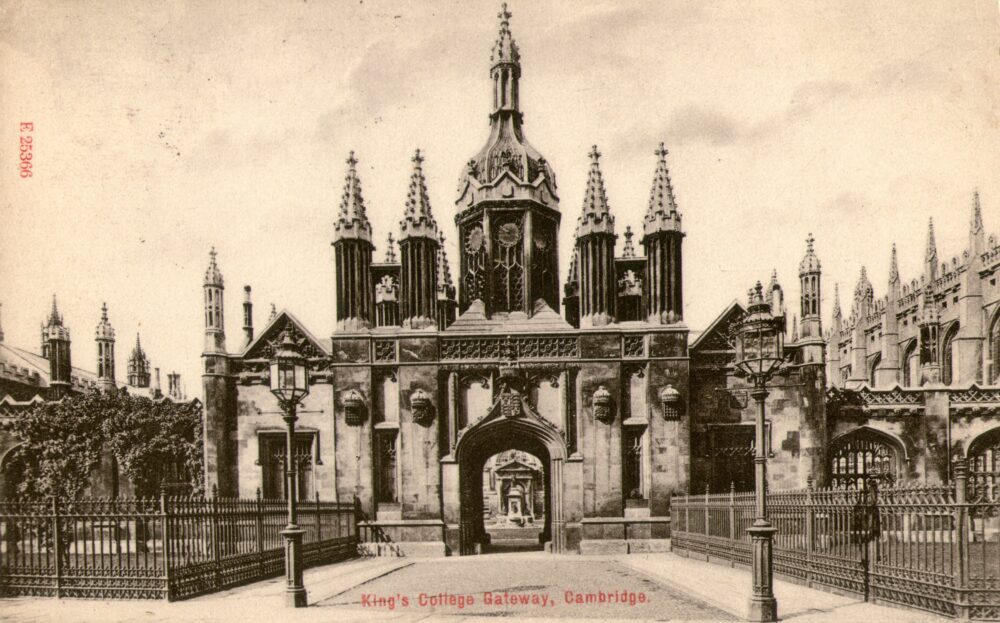 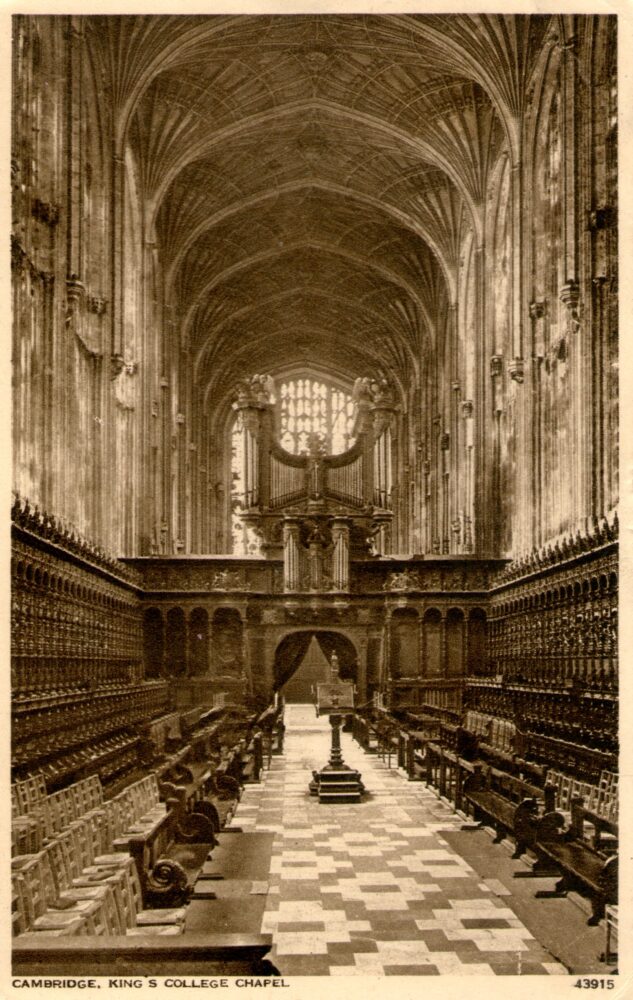 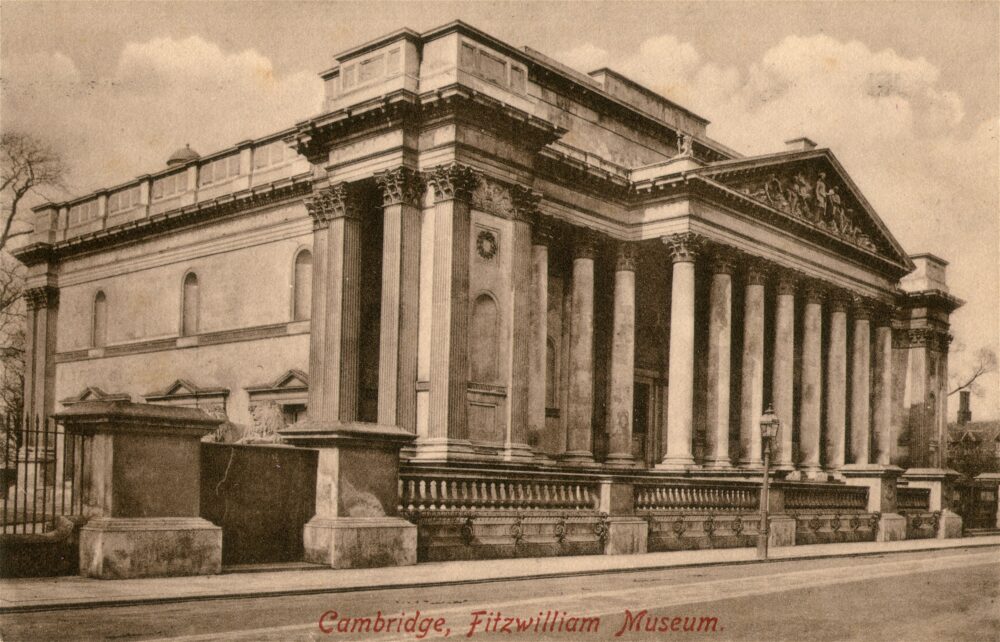 The Fitzwilliam Museum is the art and antiquities museum of the University of Cambridge. It is located on Trumpington Street opposite Fitzwilliam Street in central Cambridge. It was founded in 1816 under the will of Richard FitzWilliam, 7th Viscount FitzWilliam (1745-1816), and comprises one of the best collections of antiquities and modern art in western Europe. With over half a million objects and artworks in its collections, the displays in the Museum explore world history and art from antiquity to the present. . . . The museum was founded in 1816 with the legacy of the library and art collection of Richard FitzWilliam, 7th Viscount FitzWilliam. The bequest included £100,000 “to cause to be erected a good substantial museum repository”. The Fitzwilliam now contains over 500,000 items and is one of the best museums in the United Kingdom. The collection was initially placed in the Perse School building in Free School Lane. It was moved in 1842 to the Old Schools in central Cambridge, which housed the Cambridge University Library.

The “Founder’s Building” was built during the period 1837–1843 to the designs of George Basevi, completed by C. R. Cockerell. The foundation stone of the new building was laid by Gilbert Ainslie in 1837. The museum opened in 1848. The Palladian Entrance Hall, by Edward Middleton Barry, was completed in 1875. A further large bequest was made to the University in 1912 by Charles Brinsley Marlay, including £80,000 and 84 paintings from his private collection. A two-storey extension to the south-east, paid for partly by the Courtauld family, was added in 1931, greatly expanding the space of the museum and allowing research teams to work on site.
Wikipedia. 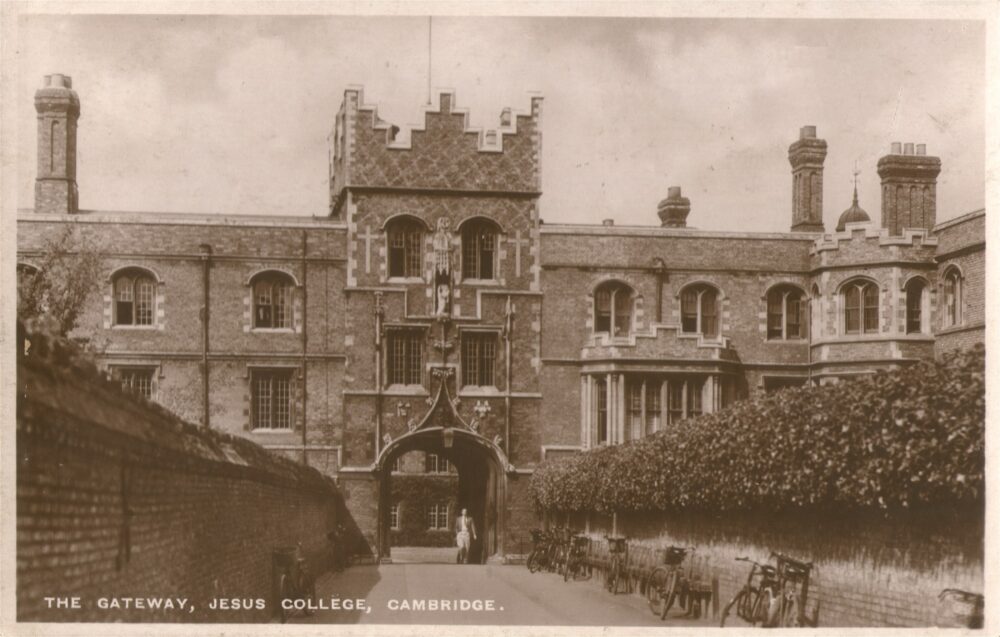 Jesus College is a constituent college of the University of Cambridge, England. The college’s full name is The College of the Blessed Virgin Mary, Saint John the Evangelist and the glorious Virgin Saint Radegund, near Cambridge. Its common name comes from the name of its chapel, Jesus Chapel. Jesus College was established between 1496 and 1516 on the site of the twelfth-century Benedictine nunnery of St Mary and St Radegund by John Alcock, then Bishop of Ely. The cockerel is the symbol of Jesus College, after the surname of its founder.
Wikipedia. 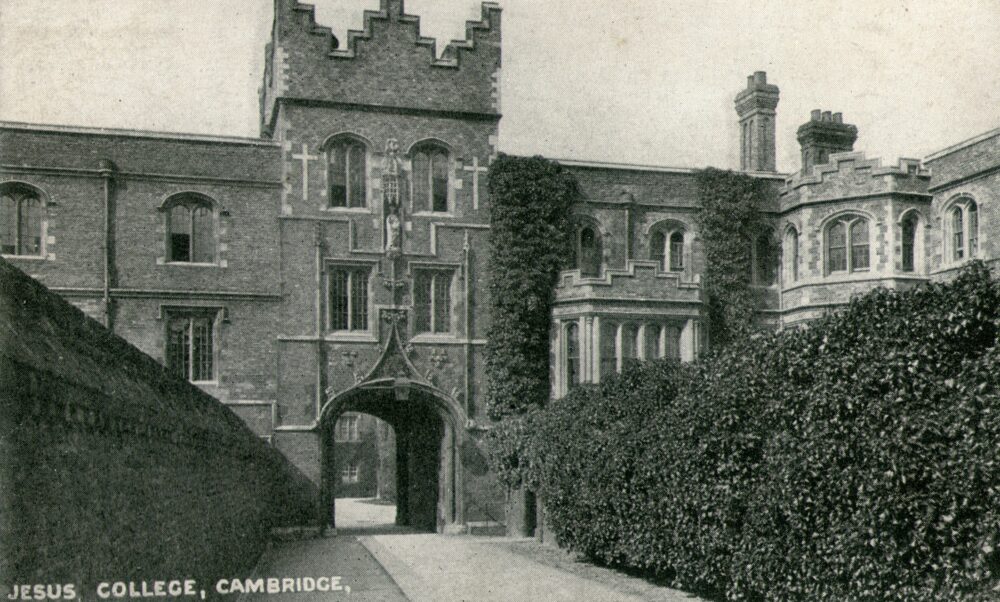 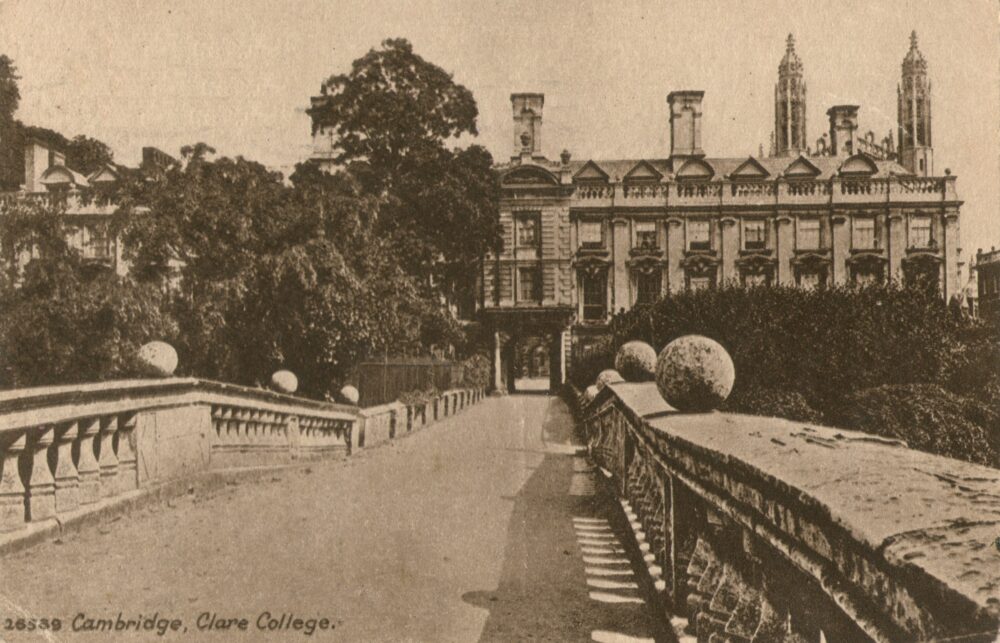 Clare College is a constituent college of the University of Cambridge in Cambridge, England. The college was founded in 1326 as University Hall, making it the second-oldest surviving college of the University after Peterhouse. It was refounded in 1338 as Clare Hall by an endowment from Elizabeth de Clare, and took on its current name in 1856. Clare is famous for its chapel choir and for its gardens on “The Backs” (the back of the colleges that overlook the River Cam).
Wikipedia 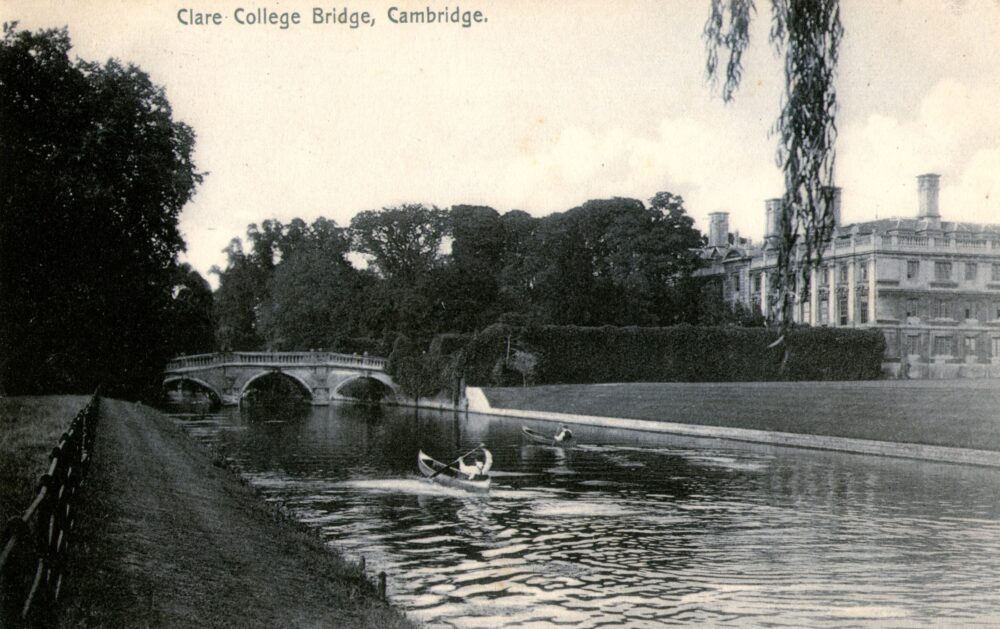