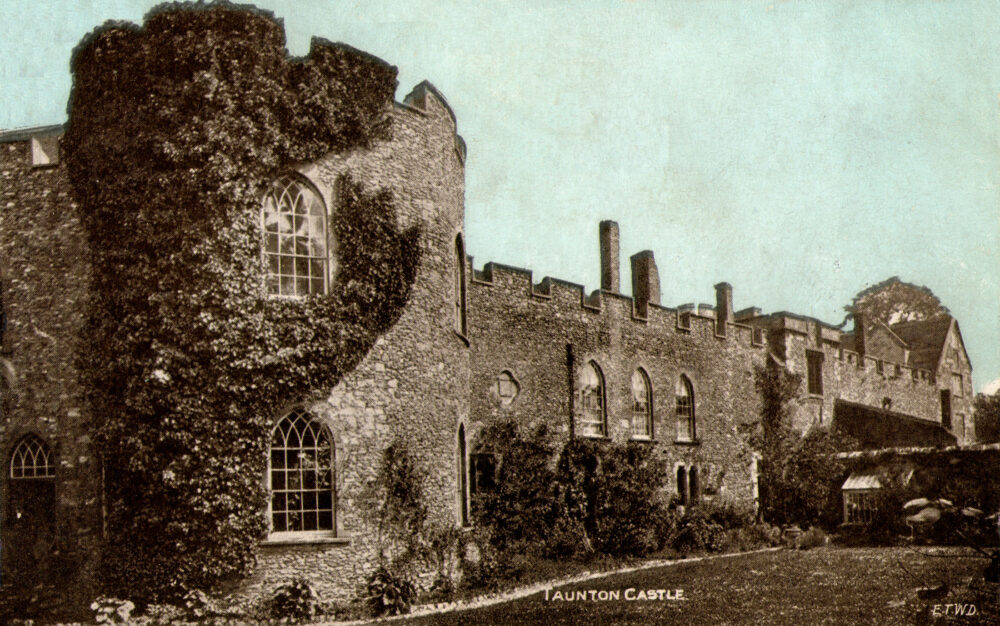 Taunton Castle was at the heart of a great Somerset estate owned by the bishops of Winchester. Lands belonging to the bishops were scattered over seven English counties, and reached to the banks of the Thames at Southwark. But Taunton was their largest estate, occupying thousands of acres in the Vale of Taunton Deane. A residence for the bishops and a minster church evidently existed at Taunton during the Anglo-Saxon period. But it was in the 12th century that the present Castle began to take shape. It was most of all an administrative centre and a status symbol, which welcomed royal guests including King John and his son Henry III. Occasionally it was also tested in warfare. In 1451 the Earl of Devon, a Yorkist, was besieged at Taunton by the Lancastrian Lord Bonville. And it was at Taunton Castle in 1497 that Perkin Warbeck, the failed pretender to the throne of Henry VII, was brought before the Tudor king as his prisoner.
. . .
The Great Hall continued to be used as a law court until 1858, as well as for public meetings. In 1831 a speech given there by the wit and orator Sydney Smith turned the tide of national opinion in favour of Parliamentary reform. But the Castle began falling into decay and was only rescued when in 1874 it was purchased by Somerset Archaeological and Natural History Society.
The Museum of Somerset

…here, upon the edge of one of the inosculating branches of the sluggish stream, Ine founded his castle by throwing up banks of earth girdled with deep and formidable ditches, and no doubt further strengthened by stockades of timber, or at best by walls the workmanship of which scarcely deserved the name of masonry. Such as it was it was destroyed, that is, burned, by Queen Æthelburh in 722, who probably however left the earthworks, the better part of the defence, much as she found them. . . . Within this area, occupying its north-east corner and about a quarter of its extent, is the inner court or citadel of the place, roughly rectangular, and measuring about 123 yards east and west, by 73 yards north and south. Its east and north faces rest upon the main ditch and the river, and its south and west faces are covered by a curved ditch, artificial, which gives the eastern outer ditch a second connexion with the river, and divides the outer, called “Castle Green,” from the inner court. The position was a very strong one, having the river, and beyond it a morass, towards the north, or threatened side, and to the south a ditch, in part double, and always filled with water.
. . .
What occurred here, and by whom occupied, or what changes took place between the reign of Ine and the end of the eleventh century is not known, but the Normans, accustomed, as far as practicable, to occupy the Saxon seats, soon perceived the advantages held out by the position and earthworks at Taunton, and William Gifford, who held the lordship as Bishop of Winchester in the reign of Henry I., seems to have decided upon building a regular castle. His successors, bishops of Winchester, were much here, and the castle received much addition at their hands, especially in the early Decorated period, of all of which traces more or less considerable still remain.
“Mediæval Military Architecture in England, Vol. II”, George Thomas Clark, 1884

The earliest archaeological features identified at the site include a large number of human burials; the majority were recovered from the area which subsequently became the castle’s outer ward, though several burials were situated within the inner ward. These burials provide evidence for an extensive late-Saxon cemetery associated probably with the minister church that was established in the late 7th century and is referred to in historical records. Radiocarbon dates indicate that the cemetery was active from the late 7th century up to the C11.
Historic England 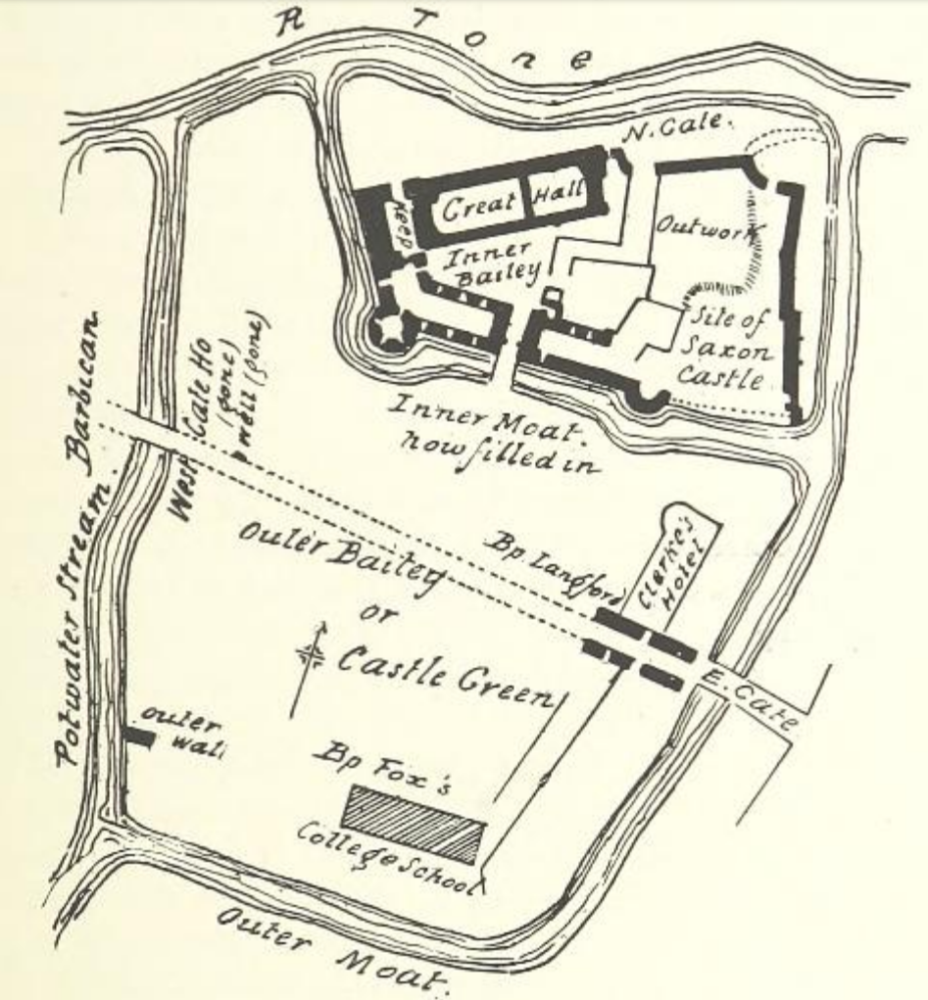 The entire enclosure, surrounded by river, stream, and moat, contains about seven acres, the inner bailey or citadel occupying its N.E. corner. Nothing remains of the outer walls of the lower bailey except a considerable part of the E. gatehouse, defending the entrance on that side to a road which passed through to the W. side, where the gatehouse has disappeared ; there were drawbridges at each of these entrances over the moat and stream, and on the other side of these were wooden barbicans, some timbers of which have been dug up. None of the buildings exist now of the lower ward,— Bishop Fox’s school being, of course, early sixteenth-century work. A good deal of the Norman building of the inner ward remains ; on the W. side is a portion of the rectangular keep, forming part of the wall along the inner moat, and measuring about 50 feet by 40, with walls 13 feet thick. The stone vaulting of its basement remains, and there was a staircase in the N.E. corner, from which extends the outer wall, forming, as at Leicester, the wall of the great hall.
“The castles of England, their story and structure, Vol. II”, James D. Mackenzie, 1897, p. 72

Taunton Castle was extensively modified during the Tudor era when its defensive arrangements were downgraded in order to convert it into a more comfortable residence. Large windows were installed in the Inner Ward Gatehouse and Great Hall. A Grammar School was also built within the castle’s walls in 1520 by Richard Foxe, Bishop of Winchester. The nearby Priory was dissolved by Henry VIII in 1539 but the castle remained property of the church until 1551 when it was transferred into Royal ownership. It was recovered by the Bishops of Winchester in 1577.

During the Civil War Taunton was staunchly pro-Parliament but the wider area was in the Royalist sphere of influence. The populace hastily re-fortified the castle but, in June 1643, both it and the town were taken over by the King’s forces. They held it until 5 June 1644 when Taunton was taken by a Parliamentary force under Colonel Robert Blake. He fortified the town with extensive earthworks and by August 1644 he was besieged by Royalist forces under Sir Edmund Wyndham. They attempted to storm the town and succeeded in forcing Blake’s men to retreat into the castle but the arrival of a Parliamentary army under the command of Robert Devereux, Earl of Essex led to the Royalists withdrawing. The respite was short-lived however as Essex was defeated at the Battle of Lostwithiel (1644) giving the King complete dominance in the area. By September 1644 Taunton was besieged again this time by George, Lord Goring. Various relief efforts enabled Taunton to keep on resisting and neither the castle nor town fell. On 11 May 1645 the siege was lifted and, with the Royalist defeat at the Battle of Naseby in June 1645, meant the threat to the town substantially reduced although one final (and unsuccessful) attempt to take the town was made in June 1645.

The Civil War left deep anti-Royalist feelings amongst Taunton’s residents who opposed the Restoration of Charles II and initially refused to hand over the castle. This resistance prompted the new King to order the demolition of the castle in 1662. The Keep bore the brunt of this and was reduced in height to its foundations.
Castles Forts Battles 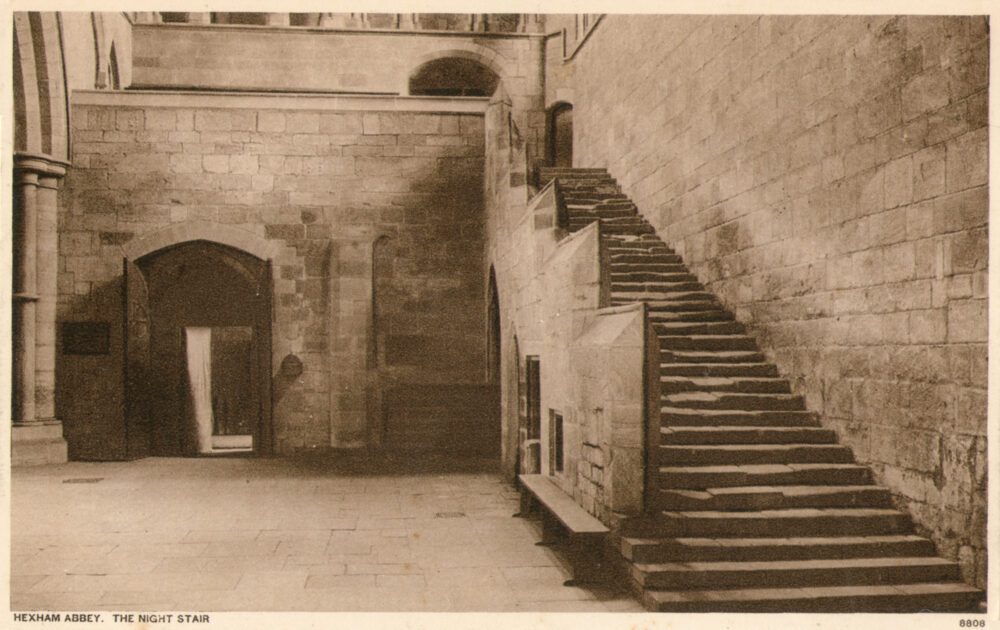 In the year AD 674 Queen Etheldreda granted land in Hexham to Wilfrid, Bishop of York. Wilfrid established a Benedictine abbey at Hexham that became one of the most prosperous abbeys in the north of England. In the 11th century that Benedictine abbey was superseded by an Augustinian priory. The priory church was built from 1170-1250 and it is that building which we can see today. The priory was dissolved by Henry VIII but the church survived as the parish church of Hexham. Hexham Abbey is predominantly Early English in style. The choir, north and south transepts and the cloisters all date from this period. The most easily noticed feature is the night stairs, a flight of 35 stone steps rising from the south transept to a broad gallery above the west door. It originally led to a dormitory for the canons of the priory, allowing them to access the church for night services.
Britain Express

The night stair led from the canons’ dormitory in the eastern claustral range to the church, and was distinct from the day stair, leading from the cloister to the canons’ dormitory, which was used daily. A gallery or platform, with a parapet, is over the slype, and the broad and easy stone stair, with a finely stepped parapet and moulded coping, leads from it to the floor of the church. Opening on to the landing are three doors. The largest gave access to the dormitory, and is now built up : the one in the south¬ west angle opens to the newel stair communicating with the upper passages and galleries ; the third, to the east, opens to a curious room, with a low vaulted ceiling, which is above the internal porch of the slype.
“Guide to the Priory Church of St Andrew, Hexham”, Charles Clement Hodges, 1921 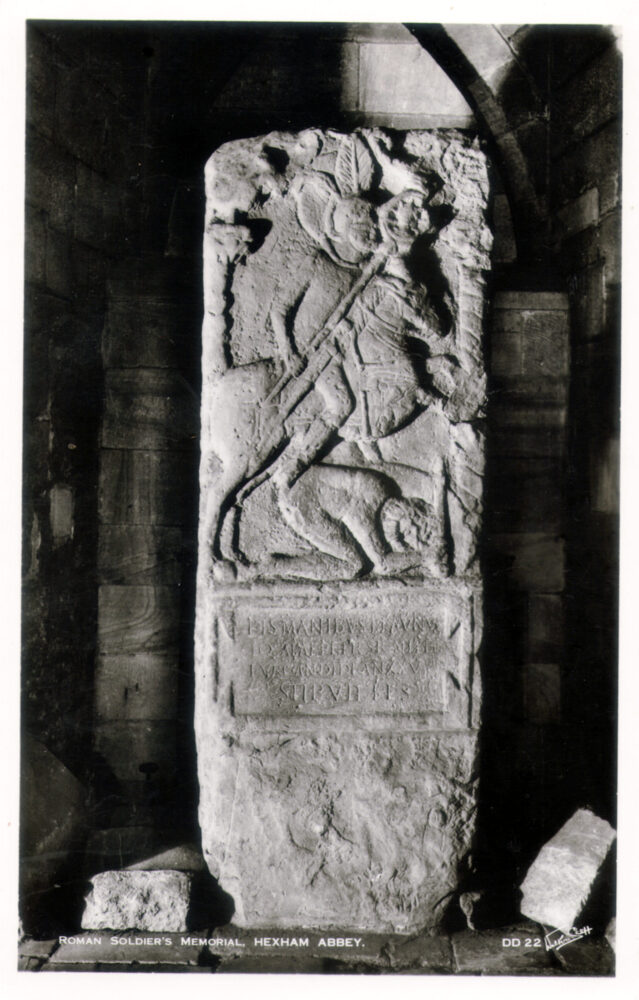