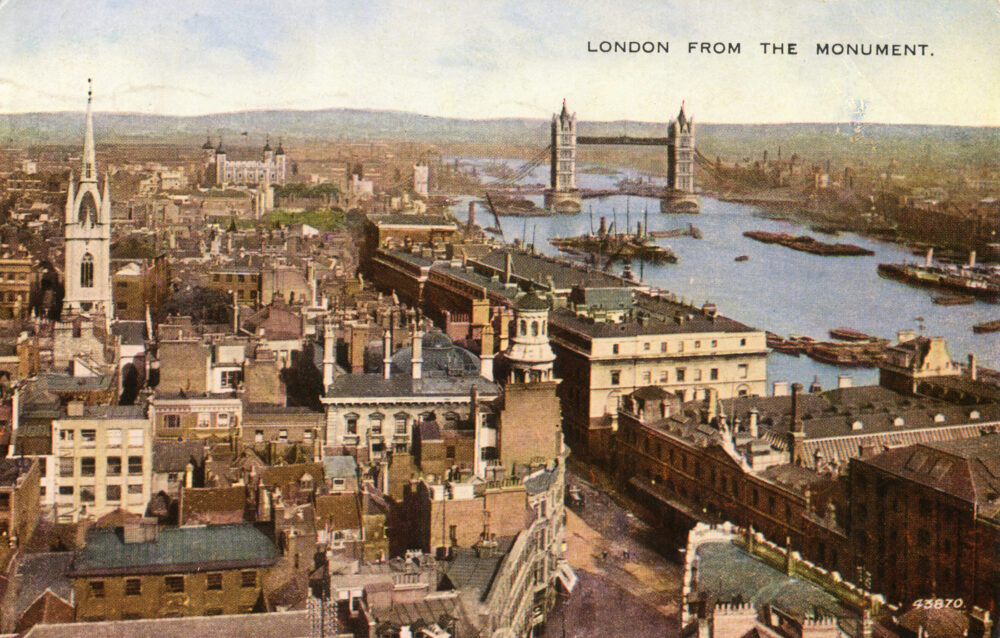 London from the Monument
On the back:
London from the Monument.– The Monument, on Fish Street Hill, from which this photogprah as taken, 202 feet high. The river Thames ins prominent on the right of the view, also the Tower brdige. Towards the left may be seen the grim old Tower of London.
Postmarked 1948
Publisher: Valentine & Sons Ltd, London & Dundee

One of the City’s best-loved attractions, The Monument offers panoramic views over London. Climb 311 steps to be rewarded with breathtaking views of the City, as well as a certificate of achievement – a special souvenir for children and adults alike. Built to commemorate the Great Fire that devastated the City of London in 1666, The Monument was designed by Sir Christopher Wren and Robert Hooke. It was constructed and built in 1671-7. The simple Doric column is topped by a flaming urn of copper gilded with two layers of gold leaf to symbolise the Great Fire.
City of London

It took nearly fifty years to rebuild the burnt area of the City, with 85 churches including St Paul’s Cathedral destroyed. Parliament enforced new guidelines for the rebuilding of the City including the implementation of wider roads and the construction of houses from brick and stone rather than timber. The task of rebuilding London was given to a committee of six, including Sir Christopher Wren, known as the ‘Commissioners for Rebuilding’. Wren produced ambitious plans for the re-build which were mostly rejected, however Wren did design 51 new city churches, as well as the new St Paul’s Cathedral and of course, The Monument.

Dr Robert Hooke and Christopher Wren together created the final design for The Monument, and construction work commenced in 1671. It took six years to finish, partly due to the difficulty of obtaining enough Portland stone of the required dimensions, and partly due to the safety of the transport as we were at war with the Dutch again between 1672-4. It was finally completed and opened in 1677.
The Monument