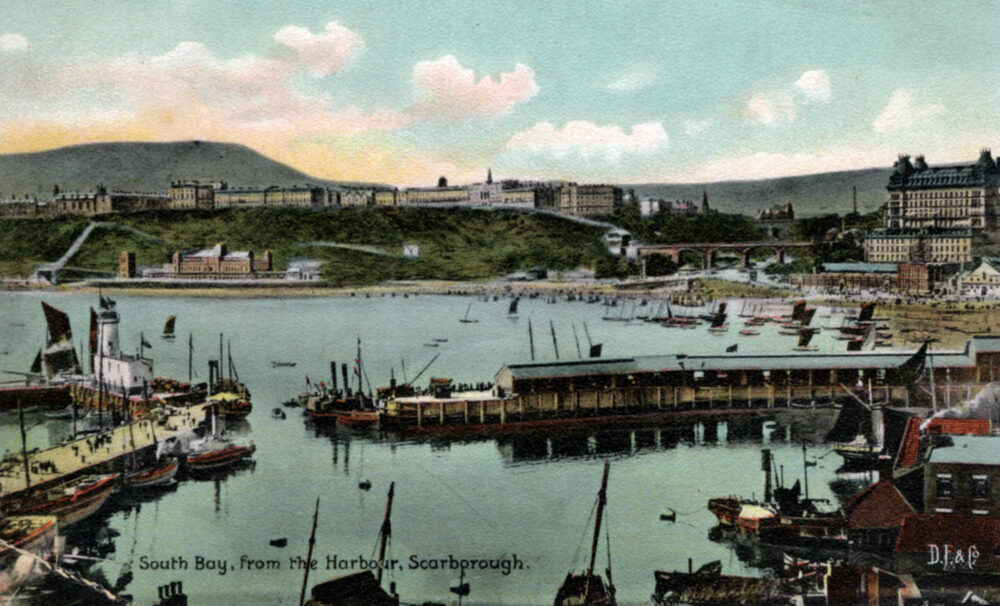 South sands is a large sandy bay with good facilities, child friendly amenities and is popular with families. There is a working inner harbour with a small fishing fleet and outer harbour for pleasure boats and yachts. There are boat trips around the bay or along the coast. A handy cliff lift provides easy access to the town centre in minutes. The historic Spa lies at the south end of the beach which holds live entertainment and houses the famous Spa Orchestra during the summer season. The Spa a widely used conference venue for the town. Heading north along the beach you will find amusements cafes and restaurants along with the traditional seaside stalls selling delights from cockles and winkles to sweets such as Scarborough rock and fudge.
Welcome to Yorkshire

The South Bay was the site of the original medieval settlement and harbour, which form the old town. This remains the main tourist area, with a sandy beach, cafés, amusements, arcades, theatres and entertainment facilities. The modern commercial town centre has migrated 440 yards (400 m) north-west of the harbour area and 100 feet (30 m) above it and contains the transport hubs, main services, shopping and nightlife. The harbour has undergone major regeneration including the new Albert Strange Pontoons, a more pedestrian-friendly promenade, street lighting and seating.
Wikipedia 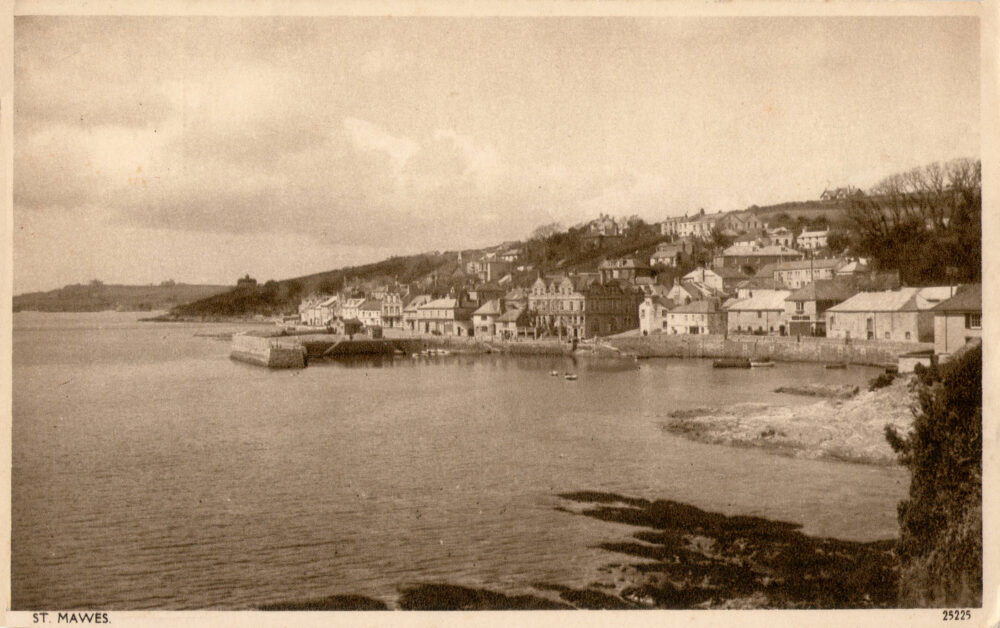 St Mawes is very picturesque, situated on a little bay between the main estuary of the River Fal and its tributary Percuil River. It owes its origin and name to a Celtic preacher who arrived around AD 550 to live as a hermit in what was then a very remote place. It had grown to a small town by the 13th century and in 1562 was granted borough status by Elizabeth I. It received the right to elect two MPs and was a notorious “rotten borough”. Its historic pilchard fishing trade has now been replaced by its role as a top-end resort.
South West Coast Path

St Mawes is a small village opposite Falmouth, on the Roseland Peninsula on the south coast of Cornwall, United Kingdom. It lies on the east bank of the Carrick Roads, a large waterway created after the Ice Age from an ancient valley which flooded as the melt waters caused the sea level to rise dramatically. The immense natural harbour created is often claimed to be the third largest in the world. It was once a busy fishing port, but the trade declined during the 20th century and it now serves as a popular tourist location, with many properties in the village functioning as holiday accommodation
Wikipedia. 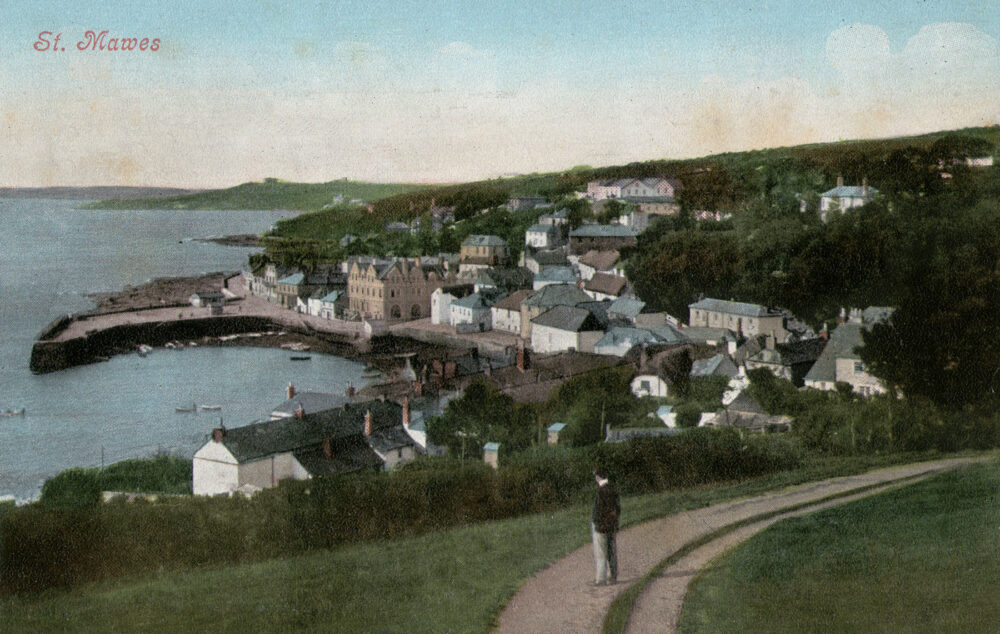 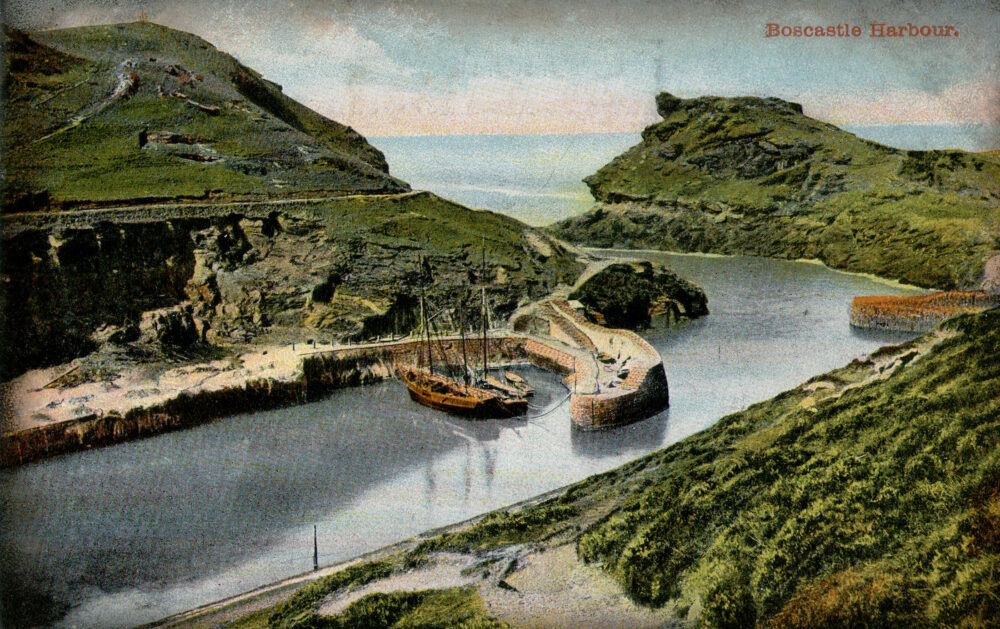 Boscastle is a village and fishing port on the north coast of Cornwall, England, UK, in the civil parish of Forrabury and Minster (where the 2011 Census population was included) . It is 14 miles (23 km) south of Bude and 5 miles (8 km) northeast of Tintagel.The harbour is a natural inlet protected by two stone harbour walls built in 1584 by Sir Richard Grenville and is the only significant harbour for 20 miles (32 km) along the coast.
Wikipedia.

Over a century ago Boscastle was a busy, bustling place. It was a commercial port throughout most of the 19th century, for the railway did not reach north Cornwall until 1893. Before that date all heavy goods to and from an area stretching many miles inland had to be carried by sea. More than a dozen ketches and schooners of 30 to 200 tons traded regularly through the little port. In one year alone 200 ships called. Many vessels brought supplies in from South Wales and Bristol but even cargoes of timber direct from Canada came into Boscastle. The tortuous harbour entrance, with the island of Meachard as an extra hazard, meant it was never safe for sailing vessels to enter Boscastle un-assisted. They were therefore towed or ‘hobbled’ in by ‘hobbler’ boats manned by eight oarsmen. Gangs of men on shore took other ropes to keep the ships in the middle of the channel.
National Trust 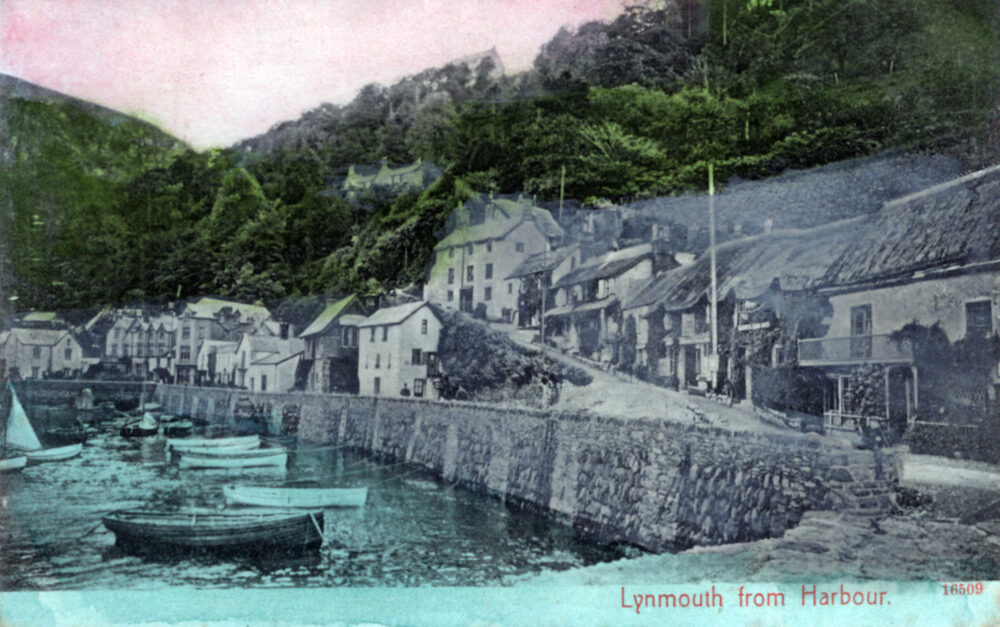 The twin villages of Lynton and Lynmouth together make up one of the most popular seaside resorts in Devon. Though the two villages are often linked together, they have very different characters. Lynton, on top of the cliffs, is a Victorian resort, while Lynmouth, at the base of the cliffs, is a historic fishing village of stone-built cottages beside the River Lyn.
Britain Express 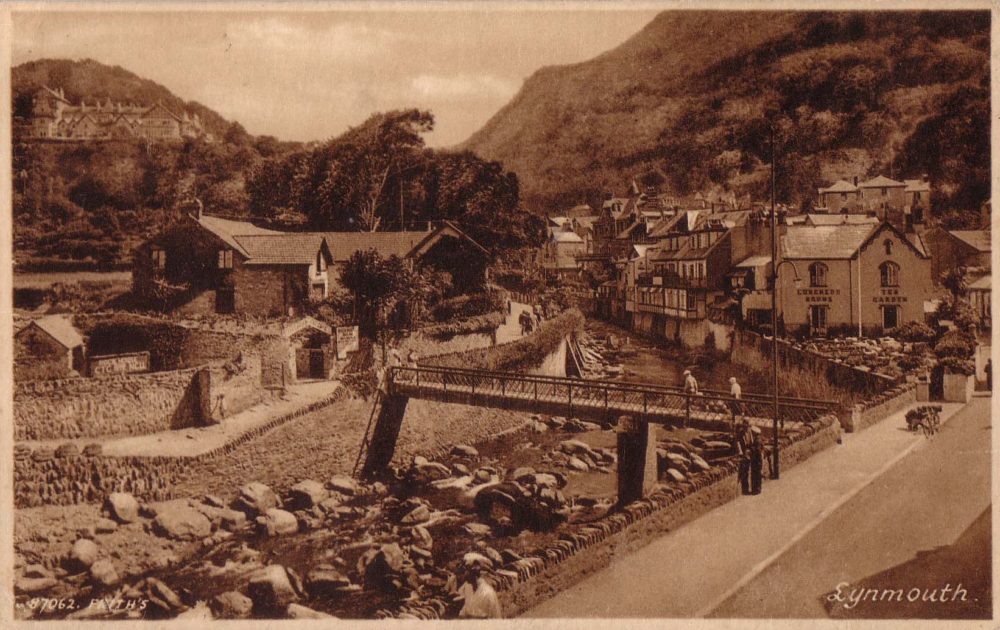 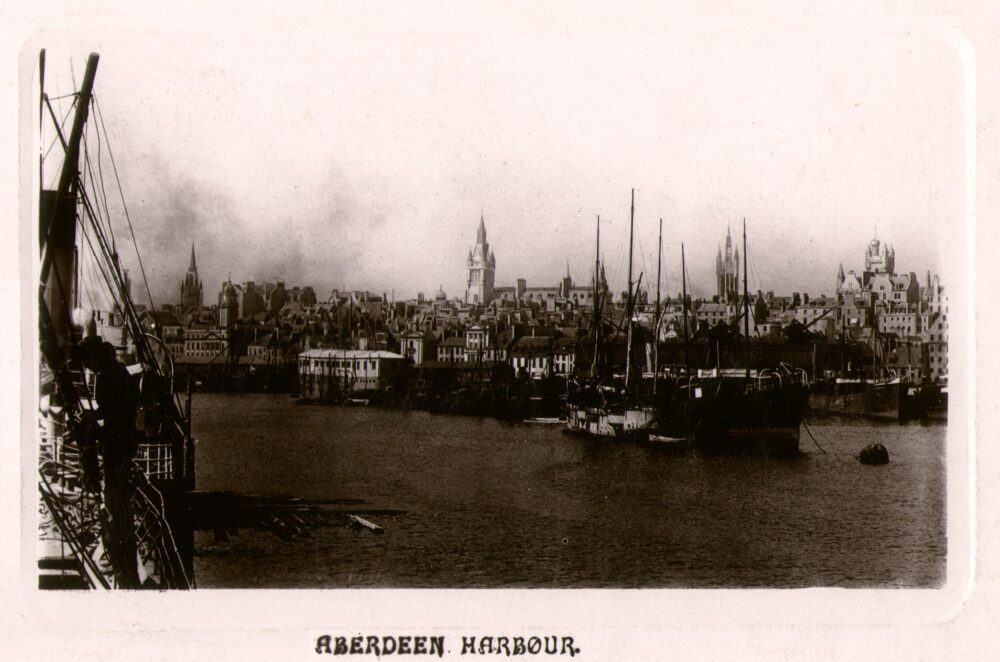 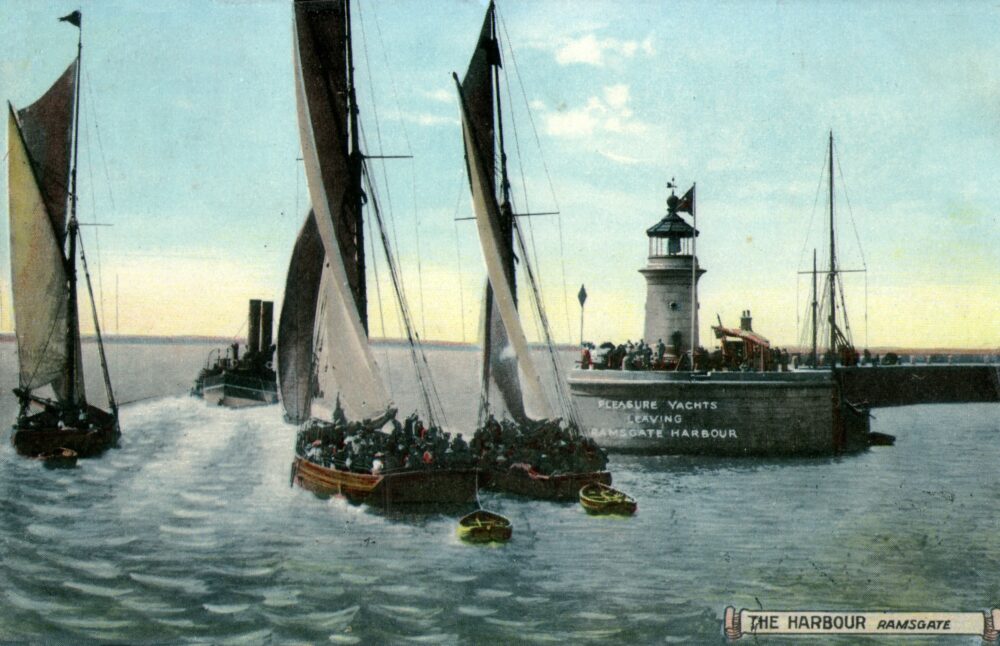 The construction of Ramsgate Harbour began in 1749 and was completed in about 1850. The two most influential architects of the harbour were father and son John Shaw and John Shaw Jr, who designed the clockhouse, the obelisk, the lighthouse and the Jacob’s Ladder steps. The harbour has the unique distinction of being the only harbour in the United Kingdom awarded the right to call itself a Royal Harbour. This was bestowed by King George IV after he was taken by the hospitality shown by the people of Ramsgate when he used the harbour to depart and return with the Royal Yacht Squadron in 1821. Because of its proximity to mainland Europe, Ramsgate was a chief embarkation point both during the Napoleonic Wars and for the Dunkirk evacuation in 1940. The ferry terminal area is built upon reclaimed land.
Wikipedia 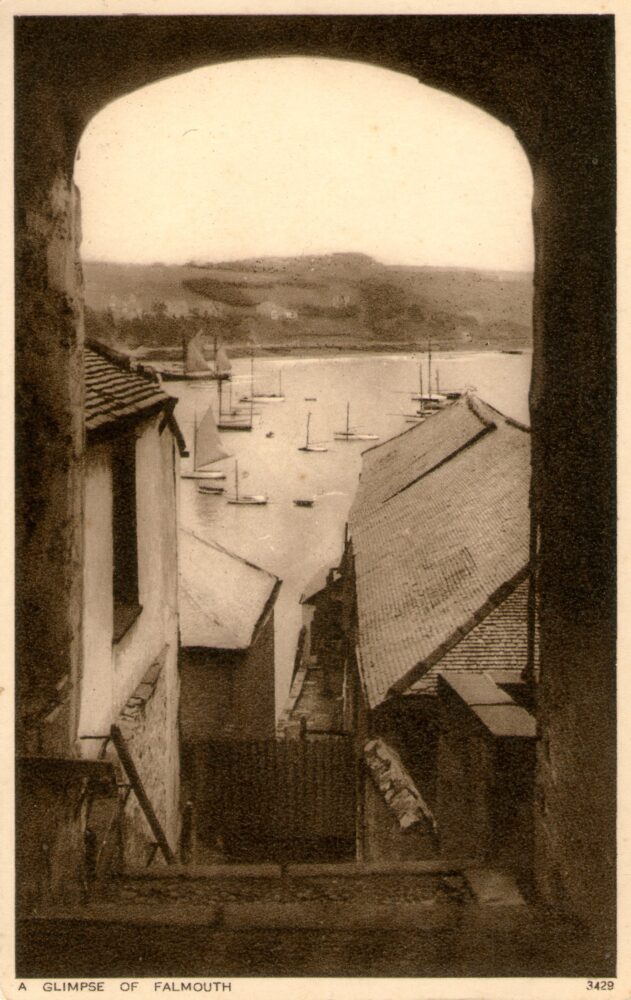 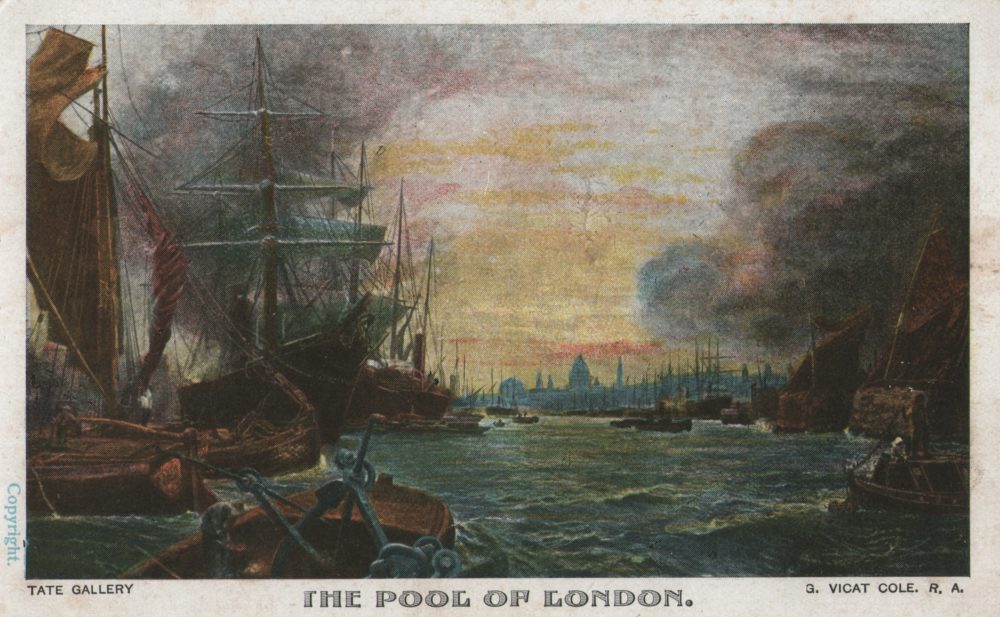 This is a postcard of a painting, The Pool of London by George Vicat Cole (1888) in the Tate Gallery. The card is about 25 years later.

This view seems to be just west of London Bridge (rougly here), because if it was east, you’d be able to see a bridge. (I think the Southwark Bridge predecessor is hidden by ships.)

A pool (in this context) is a deep and still place in a river – and thus a good place to moor a boat. London’s pool is divided into upper and lower parts, which are respectively west and east of Tower Bridge. For centuries, cargo vessels traded at riverside wharves in and around the City of London. When these quays grew increasingly overcrowded many boats took to mooring in midstream and loading or unloading with the assistance of barges. The Pool was a perennial forest of bobbing masts. As early as 1586 William Camden boasted: “A man would say, that seeth the shipping there, that it is, as it were, a very wood of trees disbranched to make glades and let in light, so shaded it is with masts and sails.”

As Britain’s empire expanded and the industrial revolution took hold, the Pool became the busiest section of river in the world, crammed not just with ocean-going ships bearing exotic produce from foreign lands, but boats full of immigrants and emigrants, skiffs bringing oysters and fish from the Thames estuary or North Sea, and colliers transporting coal from Tyneside. The first police force was formed at the end of the 18th century to prevent theft and fraud in the Pool of London. Around this time the riverbanks began to fill with imposing warehouses, several of which survive, notably at Butler’s Wharf and Hay’s Wharf on the south shore of the Upper Pool. With the construction of inland docks such as West India and East India, and later Royal Victoria and Royal Albert, the largest ships found new berths but the Pool remained a hive of activity until the ineluctable decline of London as a port in the mid-20th century.
Hidden London