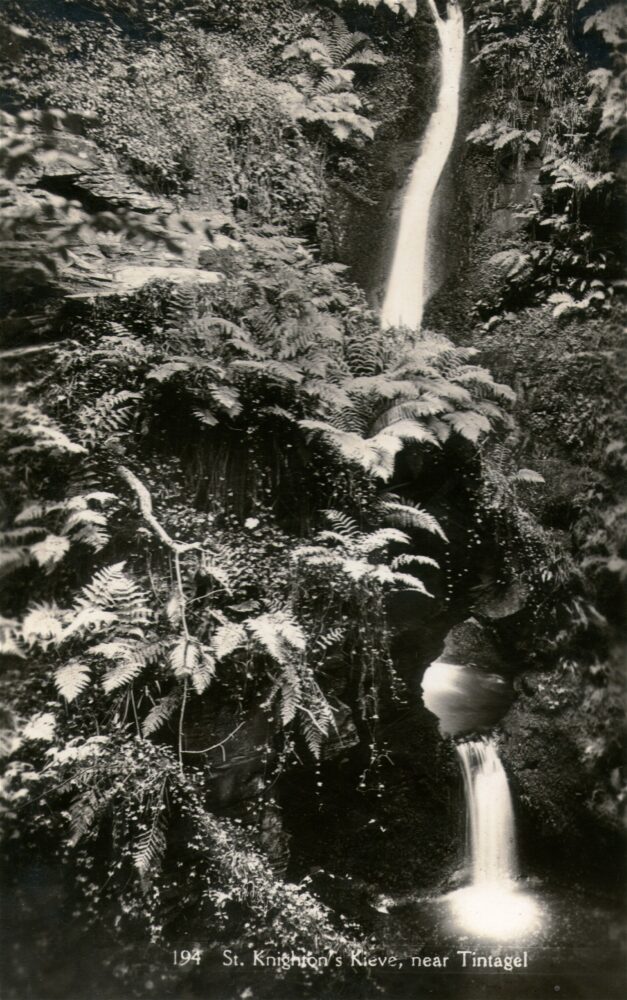 St Nectan’s kieve is revered as a sacred place, where numerous ribbons, crystals, photographs, inscriptions, prayers and other devotions now adorn the foliage and rock walls near the waterfall. You will even find a number of small stacks of flat stones, known as Faerie Stacks, constructed from stones collected from the waters by visitors, marking a special thought or moment in time during their visit, or to commemorate memories and loved ones. . . . It is believed that a building (known as the Hermitage) located at the top of the waterfall belonged to the sixth-century Saint Nectan. The date of the building is uncertain but according to legend, Saint Nectan rang a silver bell in times of stormy weather to warn passing ships of the perils of the rocks at the mouth of Rocky Valley. It is also understood that the ruins of a Christian chapel provide the lower part of the walls of a cottage erected in the 1860s, and extended around 1900.
St Nectan’s Glen

Far up the deep and rocky vale of Trevillet, in the parish of Tintagel, stands on a pile of rocks the little chapel of the good St Nectan. No holy man ever selected a more secluded, or a more lovely spot in which to pass a religious life. From the chapel rock you look over the deep valley full of trees. You see here and there the lovely trout-stream running rapidly towards the sea; and, opening in the distance, there rolls – the mighty ocean itself. Although this oratory is shut in amongst the woods, so as to be invisible to any one approaching it by land, until they are close upon it, it is plainly seen by the fishermen or by the sailor far off at sea; and in olden time the prayers of St Nectan were sought by all whose business was in the “deep waters.”
“Popular Romances of the West of England: St Nectan’s Kieve and the Lonely Sisters” (1930) Sacred Texts

Saint Nectan’s Kieve in Saint Nectan’s Glen, near Tintagel in Cornwall, Great Britain, is a plunge pool or basin fed by a 60-foot-high (18 m) waterfall on the Trevillet River. The river is carved into Late Devonian slate and several earlier kieves can be seen further up the rock walls of the waterfall. The current basin is estimated to be around 12 feet (3.7 m) deep, and the water emerges through a natural rock arch to drop a further 10 feet (3.0 m) to a wide shallow pool.

The idea that the sixth-century Saint Nectan had his hermitage above the waterfall is myth. According to legend, Nectan rang a silver bell in times of stormy weather to warn shipping of the perils of the rocks at the mouth of the Rocky Valley. Though other legends are also told of Nectan (such as his burial under the riverbed), no evidence exists to substantiate Nectan’s presence here. His home was further north, in what is now Hartland, Devon. The name is first recorded in 1799 as Nathan’s Cave in reference to a local character, either Nathan Williams or Nathan Cock, and the Cornish word Cuva (pronounced keeva) meaning tub.

The legend connecting St Nectan to the falls is the romantic whimsy of the nineteenth century clergyman, Reverend Robert Stephen Hawker who first attributed the falls to the saint in his poem, The Sisters of the Glen in 1846. The “hermitage” written about by Hawker and others was a simple summerhouse and had no connection to any saint. Many of the site’s legends are the result of Hawker’s poetry and the vivid imagination of nineteenth century Trethevy farmer, William Goard who led tour parties to the falls.
Wikipedia.

THE SISTERS OF GLEN NECTAN.

It is from Nectan’s mossy steep,
The foamy waters flash and leap :
It is where shrinking wild-flowers grow,
They lave the nymph that dwells below.

But wherefore in this far-off dell,
The reliques of a human cell ?
Where the sad stream and lonely wind
Bring man no tidings of his kind.

“Long years agone,”the old man said,
‘Twas told him by his grandsire dead :
“One day two ancient sisters came :
None there could tell their race or name ;

“Their speech was not in Cornish phrase,
Their garb had signs of loftier days ;
Slight food they took from hands of men,
They withered slowly in that glen.

“One died the other’s sunken eye
Gushed till the fount of tears was dry ;
A wild and withering thought had she,
‘I shall have none to weep for me.’

“They found her silent at the last,
Bent in the shape wherein she passed ;
Where her lone seat long used to stand,
Her head upon her shrivelled hand.”

Did fancy give this legend birth?
The grandame’s tale for winter hearth :
Or some dead bard, by Nectan’s stream,
People these banks with such a dream ?

We know not : but it suits the scene,
To think such wild things here have been :
What spot more meet could grief or sin
Choose, at the last, to wither in? 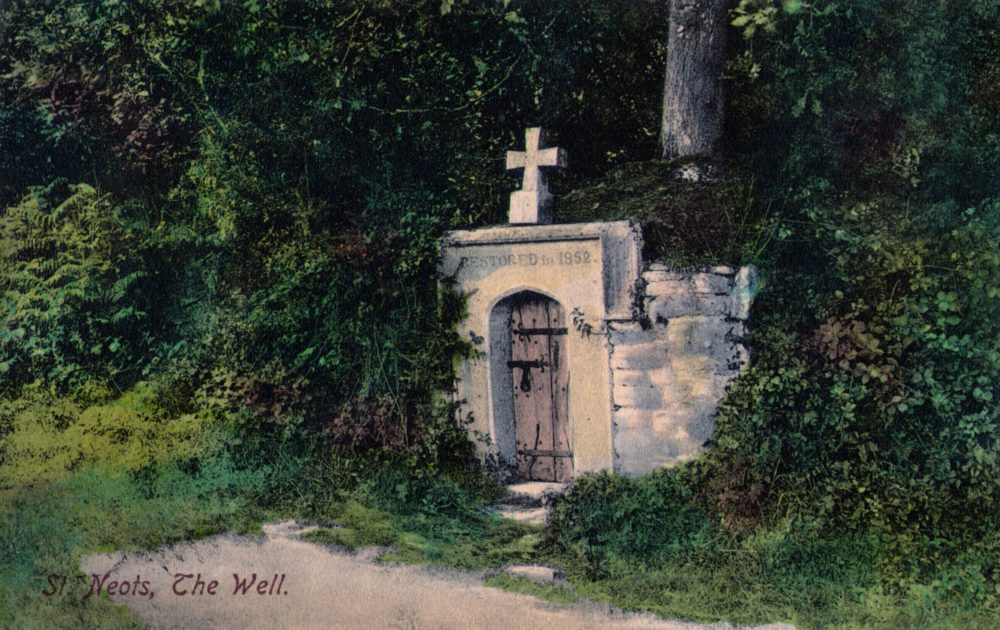 There are many churches dedicated to St Neot and at least one holy well. Legend has it that the well contained three fish, and an angel told St Neot that as long as he ate no more than one fish a day, their number would never decrease. At a time St Neot fell ill, and his servant went and cooked two of the fish; upon finding this, St Neot prayed for forgiveness and ordered that the fish be returned to the well. As they entered the water, both were miraculously returned to life.
Wikipedia

St Neot’s Holy Well is situated on the right a couple of hundred yards down a small lane that starts in between “Cott” and “Carlyon House”. The lane is almost opposite the shop in the middle of the village.
St Neot Church