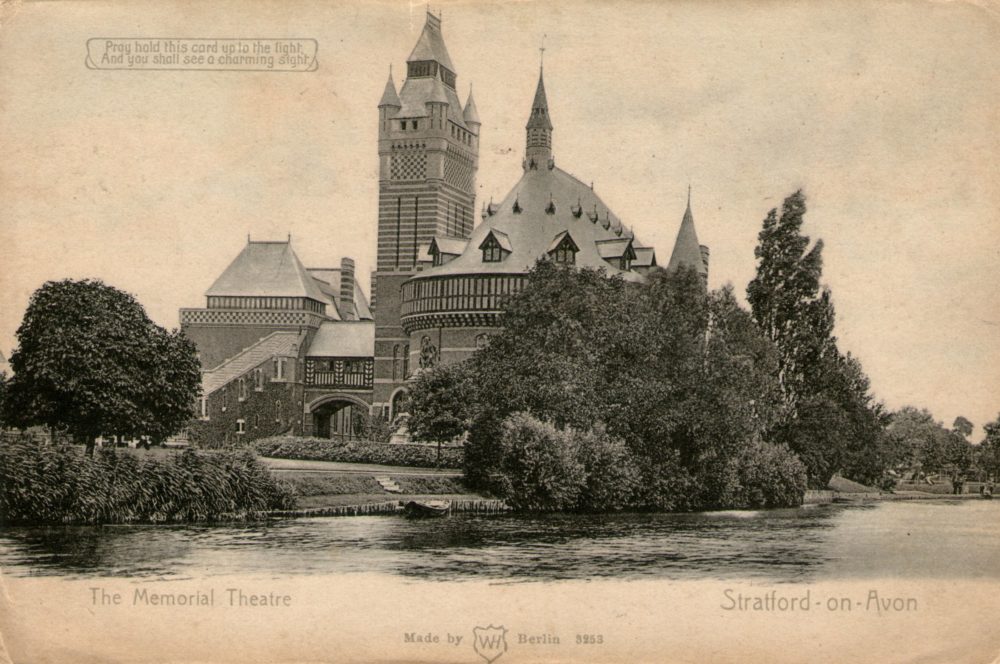 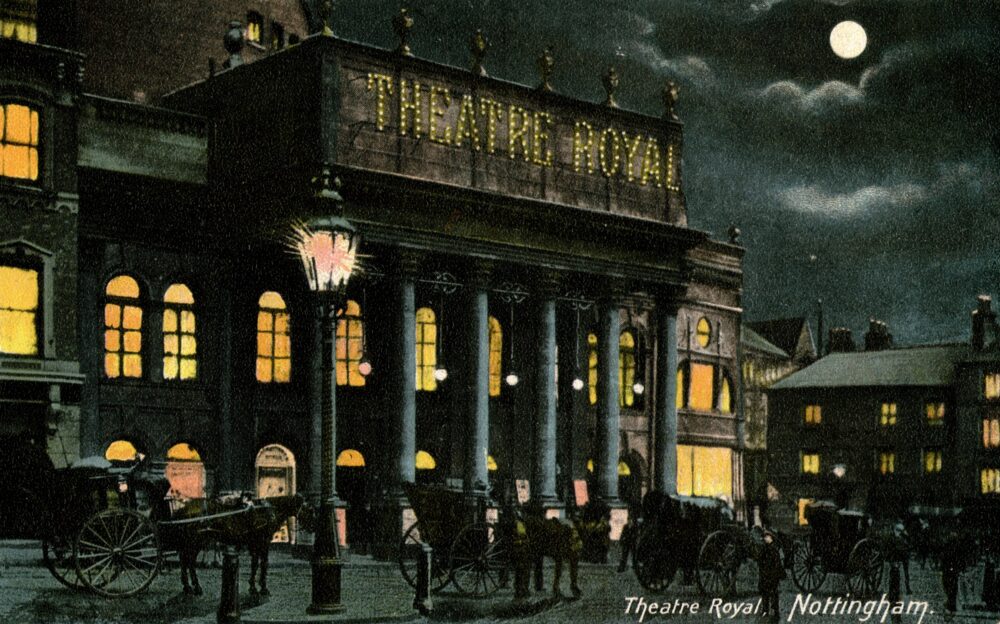 Brimming with history, the Theatre Royal is not only a city centre landmark but also one of the most beautiful Victorian theatres in Britain. Built in 1865 and later transformed in 1897 by renowned architect Frank Matcham, the theatre is considered to be one of the most spectacular surviving examples of Matcham’s work.
Theatre Royal & Royal Concert Hall

While Market Street was emerging from the rubble of Sheep Lane, the Theatre Royal sprang up in just six months using a neoclassical design from a fresh new architect. It was the second English theatre design of upcoming architect Charles J Phipps, who went on to become Britain’s first great theatrical architect with an impressive list of theatres across the country to his name. Phipps’ resplendent design had a classical theme closely modelled on the Salle Favart theatre in Paris, featuring six Corinthian pillars in Ancaster stone soaring over the entranceway, supporting a large attic with ornamental vases. This new, dignified, white building rose from the murky industrial skyline just like a classical temple, exactly as ordered.

Within the temple, the class system of 1860s Victorian England was at work, with five brass handled doors beneath the grand colonnade reflecting the status quo. There were stairs to the upper circle and two doors on the left for the middle classes; another two doors for the wealthy with ‘large dress ready’ marble staircases to the dress circle and private boxes in well-served opulence; the final door leading down to the gentleman’s cloak room. Everyone else, you ask? Nottingham’s working classes entered via doors at the side of the theatre to access the pit (stalls) – standing room only. In all, it had a 2,200 capacity, nearly twice its modern, all-seater capacity. Once inside, a sumptuously painted cylindrical interior featured bright frescoes over crimson velvet seats, and was illuminated by an enormous, 170-jet gas flame chandelier. Along with gas-fired ‘lime light’ stage lights and yet more gas jets on the stage. Fire safety wasn’t what it is today.
LeftLion 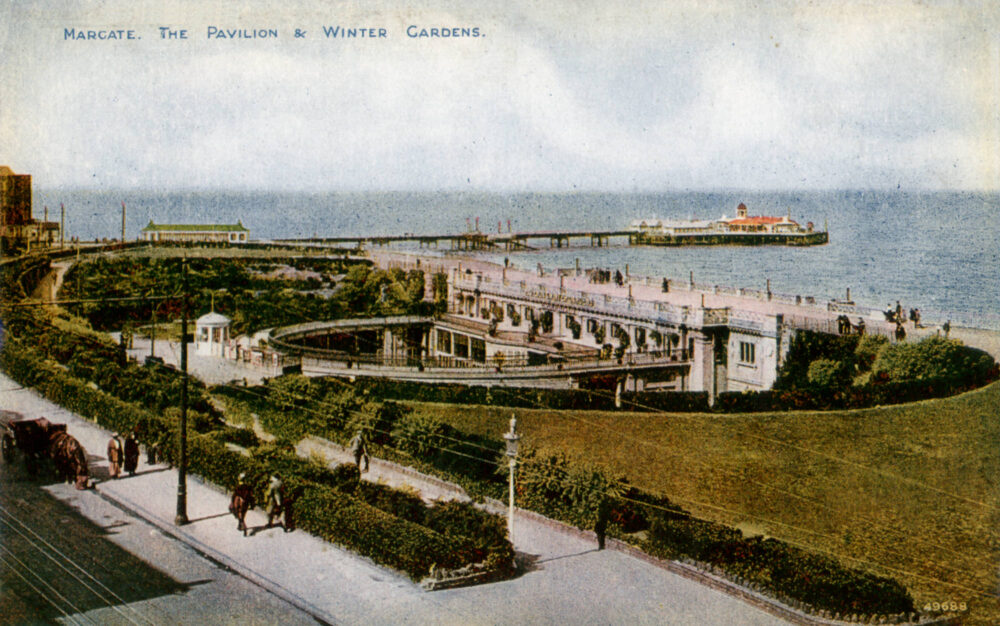 Margate. The Pavilion & Winter Garden
Seems to be a 1930s postcard using an earlier photo, possibly from when the Winter Gardens opened in 1911.
Publisher: The Photochrom Co. Ltd, London & Tunbridge Wells

It was realised that the entertainment offered by the town to the visitor via private enterprise was generally inadequate. To remedy the situation the Council in conjunction with the Chamber of Commerce, formed a Fetes Committee in 1900. . . . The site of the Winter Gardens took the committee years to find. By the end of the season in 1910, they had found the central site that was required – Fort Green. The main reason for the proposed Pavilion and Winter Gardens being situated in an artificial hollow at Fort Green was that the existing buildings around Fort Green had a covenant. This did not allow the erection of any building on the green which could obscure the view or light of the ground floors of these buildings. From the time of the plans being approved and the cutting of the first sod by the then-new Mayor of Margate Mr Booth Reeve, the Pavilion and Winter Gardens took just nine months to build at a cost of £26,000.

When completed the Pavilion and Winter Gardens consisted of: a large Concert Hall, four entrance halls, two side wings and an amphitheatre. Internally, the Pavilion and Winter Gardens was decorated in a Neo-Grecian style, which first appears in the 1830’s. Originally the stage could be viewed from both the main hall and the amphitheatre with the ability to enclose the stage in bad weather. The accommodation was for about 2,500 persons inside the building and 2,000 in the open air.
Margate Winter Gardens (via Wayback Machine)

Built in 1911 in a neo-Grecian style, designed by the Borough Surveyor, Mr E A Borg. 1930s additions. The amphitheatre was roofed over in the late-C20. Stuccoed with some cast iron railings.

PLAN: Originally a two-storey main hall to the north, with a promenade along the flat roof, flanked by vestibules with rooms over and attached one-storey semi-circular amphitheatre to the south with open centre, colonnading to the sides and ticket offices to north-east and north-west. In the 1930s a seaside cafe was added to the north, the amphitheatre roofed over and offices and a covered entrance added to the south.

INTERIOR: The original entrances and ticket offices were to the north-west and north-east. The north-west entrance retains a ticket office with a coffered ceiling with paterae, a cornice with mutules and swags, panelled walls and wide doorcases with console brackets and paterae. The original semi-circular ticket booth survives with a cornice of mutules and paterae, pilasters and three curved panels, the upper halves glazed with marginal glazing, the central one with original counter. This leads into a vestibule with similar decoration but also a wall panel with caduceus (image of the staff of Hermes entwined with two serpents) and doorcase with anthemion, shell and brackets above the cornice. The main hall has a deep coffered ceiling and deep coved cornices. The stage in the centre of the south side has a proscenium arch with giant columns, panels and shield above and a series of panels with paterae. East and west sides have large balconies with caryatids to the south sides and cast iron balustrades with Greek key decoration flanked by reliefs with caduceus, shells and laurel wreaths. Curved staircases lead up to the balconies
Historic England