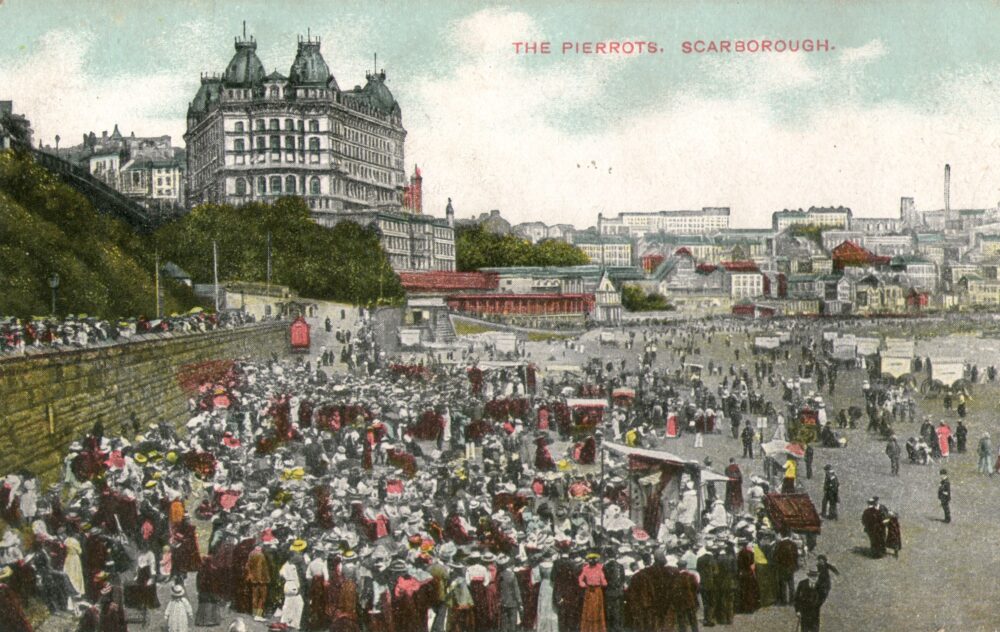 Pierrot troupes, alongside Punch & Judy and pantomime are one of the very few, indigenous, British performance forms – they are an important part of our cultural heritage and folk traditions. The origins of the pierrot character come from the medieval Italian Comedy or Commedia d’ell Arte, as do those of Harlequin & Columbine, whom we associate with pantomime and Mr Punch of Punch & Judy fame. What is unique about pierrot in Britain, is that there evolved troupes of pierrots specifically at the seaside: the story begins with the development of the seaside resorts and the mass market of holidaymakers as the industrial revolution took hold.
Seaside Follies

[The] story begins with theatrical entrepeneur Will Catlin (real name William Fox) whose popular pierrots were a regular sight on Scarborough’s South Bay during the end of the nineteenth century and beginning of the twentieth. Often referred to as the ‘sad clown’ the pierrot character has a long history – dating back to the seventeenth century, but became popular during the nineteenth century in France and beyond, as a recurring motif in theatre. With a whitened face and baggy attire, the pierrot was a naive, innocent character, whose antics included comedy, mime, song and dance.

Catlin, a former music hall performer first visited Scarborough in 1894, and it was during that time that he formed his renowed group of exclusively all-male pierrots. Whilst his pierrots toured widely – even over the winter months, when they visited a variety of cities and towns – in Scarborough they performed (during the early days) on a makeshift stage on the South Bay. They were not the only pierrot group in town – George Royle’s ‘Imps’ performed a similar act on the South Sands from the early 1900s, but adopted different tactics after being invited to entertain audiences at Floral Hall in Alexandra Gardens. Unlike Catlin’s group, Royle’s performers were male and female, and in their new venue wore period costumes, calling themselves the Fol-de-Rols.
Stories from Scarborough

The Grand Hotel is a large hotel in Scarborough, North Yorkshire, England, overlooking the town’s South Bay. It is a Grade II listed building that is owned by Britannia Hotels. At the time of its grand opening in 1867, it was the largest hotel and the largest brick structure in Europe.
Wikipedia.