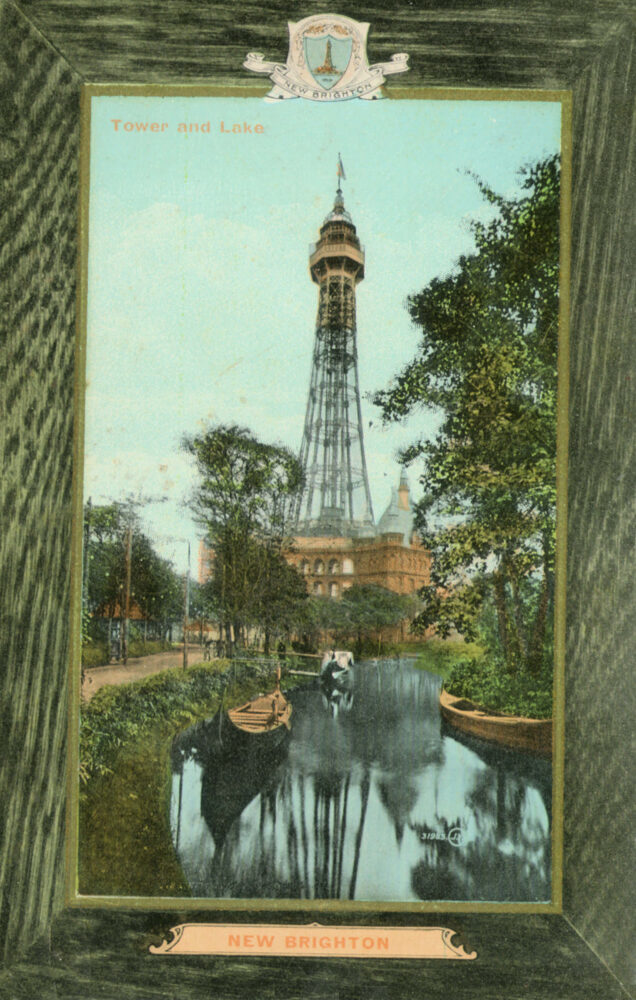 New Brighton Tower was a steel lattice observation tower at New Brighton in the town of Wallasey, Cheshire (now in the Borough of Wirral, in Merseyside), England. It stood 567 feet (173 m) high, and was the tallest building in Great Britain when it opened some time between 1898 and 1900. Neglected during the First World War and requiring renovation the owners could not afford, dismantling of the tower began in 1919, and the metal was sold for scrap. The building at its base, housing the Tower Ballroom, continued in use until damaged by fire in 1969. The tower was set in large grounds, which included a boating lake, a funfair, gardens, and a sports ground. The sports ground housed, at different times, a football team, an athletics track and a motorcycle speedway track.
…
New Brighton Tower regularly advertised itself as “the highest structure and finest place of amusement in the Kingdom”. A single entrance fee of one shilling (or a ticket for the summer season, costing 10s 6d) was charged for entrance into the grounds, which included the gardens, the athletic grounds, the ballroom and the theatre. An additional charge of sixpence was levied on those who wished to go to the top of the tower. There was a menagerie within the building, containing Nubian lions, Russian wolves (which had eight cubs in 1914), bears in a bear pit, monkeys, elephants, stags, leopards and other animals. There was also an aviary above the ballroom. The Tower Building also contained a shooting gallery and a billiard saloon with five tables.
Wikipedia.

Under the tower was an octagonal building housing a ball room and theatre. The ‘Tower Ballroom’ was one of the largest in the world and provided a sprung floor and band stage. It was decorated in white and gold and included a balcony to watch the dancers. Next to the ballroom was a billiard saloon and above it were a monkey house, aviary and shooting gallery. The theatre could accommodate 3,500 people and had the largest stage in the world measuring 45 feet wide and 72 feet deep. The grounds around the tower provided numerous other facilities. The Tower Gardens, covering 35 acres, included a Japanese Cafe, Venetian Gondolas, Parisian Tea Garden and outdoor dancing platform. The ‘Old English Fairground’ provided a switchback railway, water chute, lion house and menagerie.
Citizan

The Tower was illuminated at night with fairy lights, as were the grounds. 30,000 red, white and green around the many pathways. Admission to the grounds was a shilling, which included admission to the Ballroom and Theatre. . . . The Ballroom was one of the largest in the world, with a sprung floor and dance band stage. The orchestra had as many as 60 players. . . It was decorated in white and gold, with the emblems of various Lancashire towns. The Ballroom had a balcony, with seats to watch the dancers below. . . Above the Ballroom there was a Monkey House and Aviary in the Elevator Hall and also a Shooting Gallery.
. . .
The Tower Gardens had much to offer also. The whole area covered 35 acres. There was a large Japanese Cafe at the lakeside, where the real Gondoliers had Venetian Gondolas. There was also a fountain and seal pond in the old quarry, with its rockery. Then there was the Parisian Tea Garden where one could enjoy a cup of tea and watch the pierrots. Situated in the trees was a restaurant called ‘The Rock Point Castle’. At the Promenade end there was an outdoor dancing platform which could hold over a thousand dancers where also the Military Band played.
History of Wallasey

Standing at 567ft, it was the tallest building in the country. Visitors at the time were charged a single entrance fee of one shilling which allowed them to get into the tower grounds, and included a ballroom, theatre, gardens and athletic grounds. However, if guests were brave enough to go up the tower they were charged an additional sixpence for the pleasure. But once at the top, they were rewarded with spectacular views – on clear days, it was possible to see as far as the Isle of Man across the Irish Sea, the Lake District and the Welsh mountains.
“What happened to New Brighton Tower and why was it taken down?”, Liverpool Echo

NIGHT ON A TOWER
When the first lift ascended on the morning of 8th September, to the top of the New Brighton tower, on the Cheshire side of Mersey, tho attendant was astonished to see a woman and her 12-year-old daughter walk into the lift for the purpose of descending. The two bad been on the top of the tower since half-past 9 the previous evening. It is customary (says “Lloyd’s Weekly News”) before the descent of the last lift to give an intimation to that effect, to anyone who may be on the tower summit. Apparently the . woman and her daughter did not hear it, and they passed unnoticed when the usual round of inspection was made previous to the final lift going down. Finding themselves unable to make known their plight to others some 600 feet below, they made themselves as comfortable as possible in tho covered-in portion of the tower top. When they were rescued from their position, they took their experience quite philosophically, merely complaining that they had spent a cold, sleepless night, and leaving the tower grounds without even giving their names to the officials.
The Telegraph, 26 October 1909

In 1914, it was closed to the public following the outbreak of the First World War. With closure, lack of maintenance caused the steel superstructure to rust. The tower was eventually taken down between 1919 and 1921. Despite the tower’s removal, its ballroom continued to be used for almost the next 50 years. Many famous acts visited the New Brighton venue including Little Richard The Beatles and the Rolling Stones. . . . The end of the Tower came when it was destroyed by fire on Saturday 5th April 1969, the heroic attempts by the fire brigade who fought the flames for hours was in vain, the walls started to collapse and this magnificent building just died.
Wallasey and the Dutton Family

New Brighton, Cheshire
Stands at the mouth of the Mersey 31 miles north west of Liverpool It has a pier battery and lighthouse and will no doubt soon become a well known watering place Provisions are dear The population numbers 3319
Routes. — By London and North Western Great Northern Midland or Great Western Railways to Liverpool thence by ferry every quarter of an hour
Climate and Season.– The climate is good and the season from June to September.
Beach and Scenery.– The beach is fine hard smooth sand and very safe and the bathing is good vans plentiful The surrounding country undulated
Objects of Interest.– Wallasey Bid Seacombe Ferry the Battery which is open to public are in the vicinity and trips can be made to Liverpool where picture galleries botanical gardens parks St George’s Hall museums & c Eastham 6 miles New Ferry 4 miles Birkenhead Bangor Rhyl the Isle of Man & c by steamer
Amusements.– A band plays on the pier and boating & c can be had and there are Assembly rooms in the Abion road Churches St James and various
“The dictionary of watering places … at home and abroad”, 1883, pp. 72-3 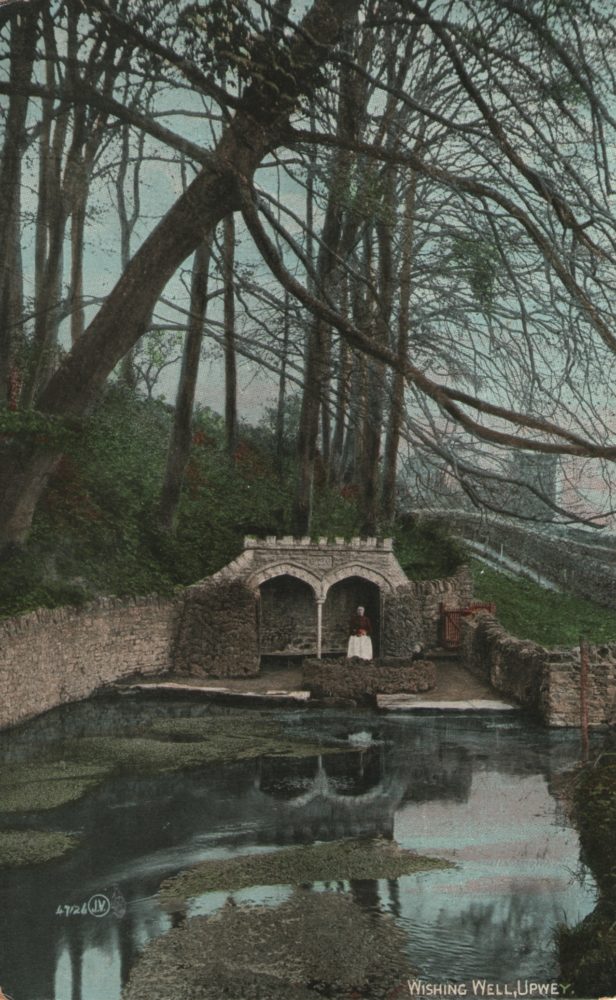 Although this is known as the Wishing Well, it is not strictly a well at all but rather is a natural spring which is the source of the River Wey which flows from Upwey to Weymouth some 5 miles downstream. It is believed to date back to the last Ice Age and was at one time the village’s water supply. It is at this point where, because of the formation of rock, sand and clay, water literally bubbles its way to the surface from the underground stream. The water is always clear and maintains a steady temperature of 10.5 degrees.
The Dorset Rambler

Frederick Treves remembered Upwey in the 1860s as ‘a spot of faint interest … there was no particular ground for assuming that a wish expressed at Upwey would have special advantages’. However, by 1906 he found at the spring ‘a seat placed under two ridiculous stone arches has been erected for the benefit of the tripper. For the benefit of the villager, on the other hand, the following ritual has been introduced, which has proved to be more lucrative than a mere gazing at the waters. The wisher receives a glass of the water from the custodian, he drinks it with appropriate giggling, empties the glass by throwing it over his left shoulder [makes a wish], and most important of all, makes an offering of money to the keeper of the well … it is a curious spectacle for the twentieth century’. Treves seems astonished that ‘Folk of all kinds go through this formula for attaining of supposed ends – old men and maidens, young men and children’.
. . .
Treves was a doctor, properly scientific and not likely to endorse this new ‘tradition’. He had known Upwey over the time it changed from a roadside spring (admittedly a very big one) into a magical well. Happily this development was so late that there are photographs of each phase. First the unaltered spring, very picturesque. Then the spring has a stone surround (indeed looking like a well) added and a rustic seat is built along the wall. About 1905 this seat was rebuilt in stone with gothicky arches, the version which survives today.
Dorset Life

The village of Upwey-the Upper Town on the Wey- affords an extraordinary instance of the value of a happy, if meaningless, title. Upwey is’one of the places of pilgrimage for the Weymouth holiday-makers. They come here in hundreds, mostly in coaches and wagonettes. The reason for their coming to Upwey is a spring there with the fascinating title of the ” Wishing Well.” It is to see the Wishing Well that the romantically minded pay their shillings for a seat in the crowded char-a-banc.
. . .
The well, as I remember it some forty years ago, was a spot of faint interest; its powers were ill-defined, and there was no particular ground for assuming that a wish expressed at Upwey would have especial advantage. The place is pleasant enough, in spite of the crowd, the swings, and the tea-gardens. A spring issues from the foot of a wooded bank, and, hurrying away under an avenue of trees, vanishes at the mill. A seat placed under two ridiculous stone arches has been erected for the benefit of the tripper. For the benefit of the villager, on the other hand, the following ritual has been introduced, which has proved to be more lucrative than a mere gazing at the waters. The wisher receives a glass of water from the custodian of this Fons Bandusea, he drinks it with appropriate giggling, empties the glass by throwing the water over his left shoulder, and, most important of all, makes an offering of money to the keeper of the well.
“Highways and Byways of Dorset, Joseph Pennell, 1914”, Dorset Online Parish Clerks