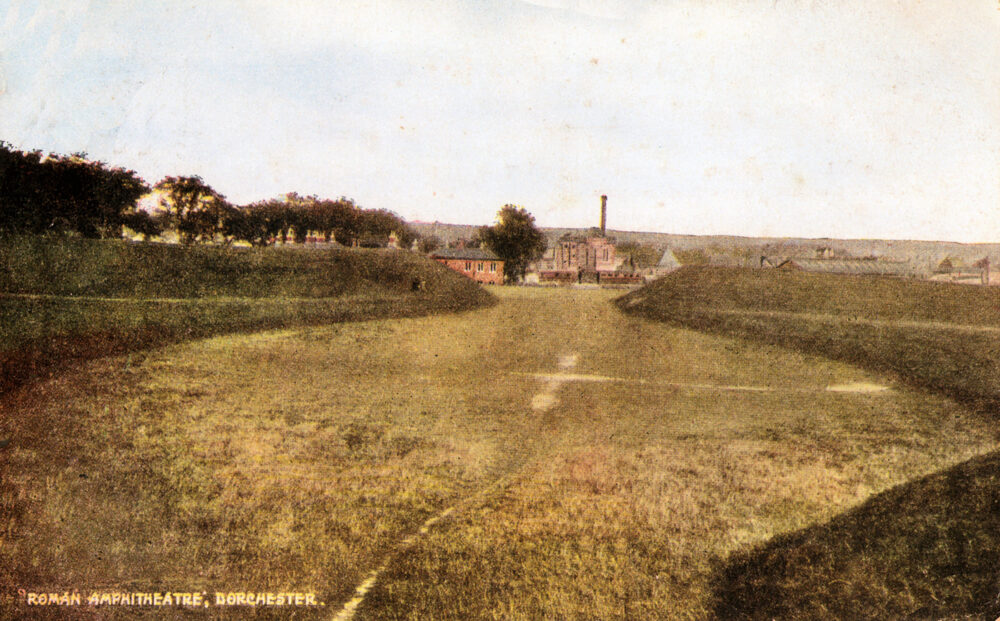 Maumbury Rings is a Neolithic henge in the south of Dorchester town in Dorset, England (grid reference SY690899). It is a large circular earthwork, 85 metres in diameter, with a single bank and an entrance to the north east. It was modified during the Roman period when it was adapted for use as an amphitheatre, and the site was remodelled again during the English Civil War when it was used as an artillery fort guarding the southern approach to Dorchester. The monument is now a public open space, and used for open-air concerts, festivals and re-enactments.
Wikipedia.

The Neolithic Henge’s original function, like so many other structures from the same time, remains enigmatic though scholars have proposed it could have been a place of ritual or astronomical observation, as excavations in the early 20th century revealed the shafts used in its foundation contained fragments of tools made from deer bone, flint, and even fragments of human skull! The reason Maumbury Rings still stands while so many henges have disappeared over time is that it has been adapted to suit various purposes since its creation. The Roman Town of Durnovaria (Dorchester) modified the rings in roughly 100 AD to make it a place of entertainment – an amphitheatre. Throughout this period the rings would be host to gladiatorial fights and executions. There’s no record of the rings use in Saxon times though it likely stayed as a place of meeting and by the middle ages it was again host to violent spectator sports, this time jousting tournaments. In 1642 the earthwork was again remodelled and saw yet another function, this time one of war. The Parliamentarians turned it into an artillery fort guarding the southern flank along Weymouth Road where the Royalists were thought to be advancing. After the civil war Maumbury rings gained a macabre status as its role as a place of public execution was revived, most notably by the infamous Judge Jeffreys who condemned eighty rebels to death in Maumbury Rings.
Dorchester Dorset

The monument includes a henge, a Romano-British amphitheatre and Civil War fieldworks situated in the centre of Dorchester. The henge, amphitheatre and fieldworks are superimposed on one another with visible remains of all three elements. They survive as a roughly circular enclosure bank with an internal diameter of up to 64m, the bank measuring approximately 4m wide, broken and terraced in places with a maximum height of 4m externally and 5.6m internally. There is an entirely buried internal henge ditch, and a bulge in the earthworks to the south west marks the site of the gun emplacement. From the centre of the enclosure the ground slopes gradually upwards. The single entrance is to the north east. The gun emplacement has levelled part of the bank and is composed of a steep ramp of material with a level platform thus created on the summit. . . . During the Romano-British period the henge earthworks were modified by the internal excavation of an oval, level arena floor and the cutting of seating into the scarp and bank which was subsequently revetted with either chalk or timber. Chambers were cut into the bank to the south west and one on each side of the centre. Objects recovered on the arena floor and elsewhere suggested a 4th century date for the final usage of the amphitheatre although there was a 2nd century inhumation. The Civil War fieldworks were begun in 1642 and are visible as terraces and a gun emplacement platform to the south west. . . .Subsequently the interior of the enclosure was under cultivation.
Historic England