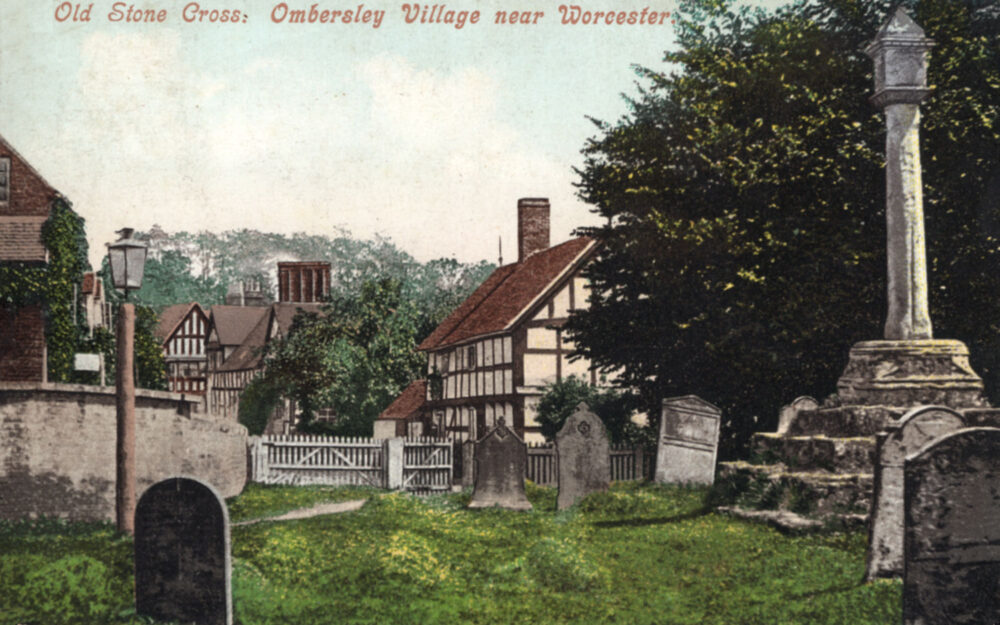 The church was built in 1829, at a cost of £1,600; is in the decorated English style; consists of nave, aisles, and chancel, with tower and lofty spire; and contains about 900 sittings. The chancel of the old church still stands, and is used as the Sandys burial-place. The churchyard contains an ancient cross.
Parishmouse: Ombersley Worcestershire Family History Guide

George W Gillingham, vicar of Ombersley (1934-1953), described the old village cross in his book, “Ombersley: An Historical and Sporting Guide” (1948):
“Originally it was the very centre of everything. The market was held close by. The old roads from Worcester and Droitwich met almost beneath it and then went their divers ways. The old church stood within a few yards and the worshipers passed close by it for Divine Service. It was used as a station for processions and outdoor preaching. Important public pronouncements were made from its steps.”

When the schools were in the village centre and the weather was arm and sunny, the girls were allowed to sit on the steps to do their knitting and sewing. Without doubt the Old Village Cross, or at least parts of it, are ancient. The base is four steps of sandstone blocks. The plinth has quatrefoil carvings and is thought to be c14th. The shaft, which is probably not the original one, has chamfered edges top and bottom and is topped with sandstone block that once was a sundial. Gillingham thought it was the third shaft because he assumed the first would have been smashed during the Reformation. However, whether the original was destroyed and a second one replaced before 1825 remains pure speculation or supposition.

Indeed, Gillingham’s description of the shaft’s chamfered edges and sundial match that made in 1825 by Dr. Peter Prattinton, renowned and avid collector of Worcestershire history and antiquities. A hundred years later we see the same shaft in a watercolour painted by Frank Moss Bennet. On the third step on the west side is a niche that, at some time long passed and on market days, may have held a pot of vinegar. This, it is thought, was used to disinfect money. The same story is also told about the plague stone, now displayed on the old weighbridge site.
Ombersely WW1 Remember Research Collection Form

In the churchyard is a tall cross raised on a platform of four steps; the 15th-century square base is moulded and its faces are panelled with quatrefoils. The shaft is octagonal, chamfered out to the square above and below, and supports a red sandstone head, surmounted by a hollow-sided pyramid. The cornice and the pyramid are 18th-century work and the lower part of the head probably 17th-century. A dial is set on the south face.
“A History of the County of Worcester: Volume 3”, British History Online 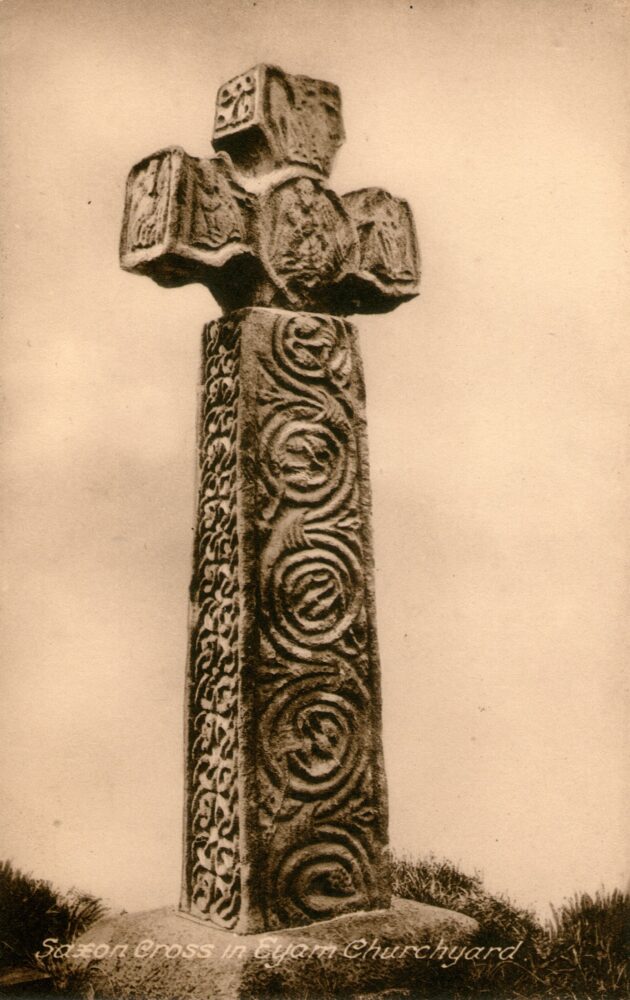 In the churchyard is an Anglo-Saxon cross in Mercian style dated to the 8th century, moved there from its original location beside a moorland cart track. Grade I listed and a Scheduled Ancient Monument, it is covered in complex carvings and is almost complete, but for a missing section of the shaft.
Wikipedia.

At the south side of St Lawrence’s parish church at Eyam in the Peak District, Derbyshire, there is a beautifully sculptured 8 foot-high Saxon cross which is said to date from either the 8th Century or the 10th? It is also known as a Mercian Cross. Some of the design-work on the shaft and head bears some similarity to Celtic design. In the 8th Century Christian missionaries (from the north) set up the cross at Crosslow to the west of Eyam. The cross-shaft was originally a couple of feet taller than it is at present but, despite that, it is one of the best-preserved of all the Mercian crosses in the Midlands.
The Journal of Antiquities 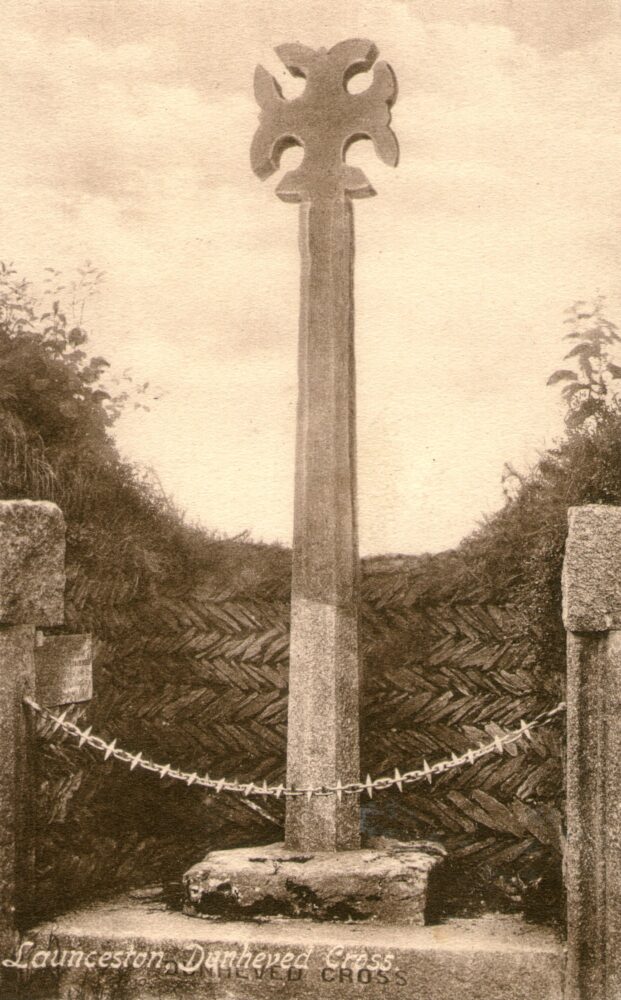 Wayside crosses are one of several types of Christian cross erected during the medieval period, mostly from the 9th to 15th centuries AD. In addition to serving the function of reiterating and reinforcing the Christian faith amongst those who passed the cross and of reassuring the traveller, wayside crosses often fulfilled a role as waymarkers, especially in difficult and otherwise unmarked terrain. The crosses might be on regularly used routes linking ordinary settlements or on routes having a more specifically religious function, including those providing access to religious sites for parishioners and funeral processions, or marking long-distance routes frequented on pilgrimages. Over 350 wayside crosses are known nationally, concentrated in south west England throughout Cornwall and on Dartmoor where they form the commonest type of stone cross
…
The monument includes a wayside cross known as the Dunheved Cross and a protective margin around it, situated beside a minor road next to the main east-west route, the modern A30 road, on the southern outskirts of Launceston in east Cornwall. The Dunheved Cross is visible as an upright granite shaft and head set in a two stepped base. The cross is a composite structure of three medieval cross parts found in the vicinity, together with a modern lower shaft and lower base step. The upper basal step is a medieval cross base originally located at the Badash, or Dunheved, crossroads, 20m north of the monument’s present location. The upper shaft of the monument was discovered 400m to the south west at Badash Farm and is considered to have derived from the cross base when complete. The cross head was discovered in a field on Tresmarrow Farm, 1.3km to the WSW. The separate pieces were assembled, with the modern lower shaft and lower base, at the Badash cross-roads in 1902. The resulting cross was re-erected 20m further south to its present site when the Launceston by-pass, the A30 trunk road, was built in 1981.
Historic England