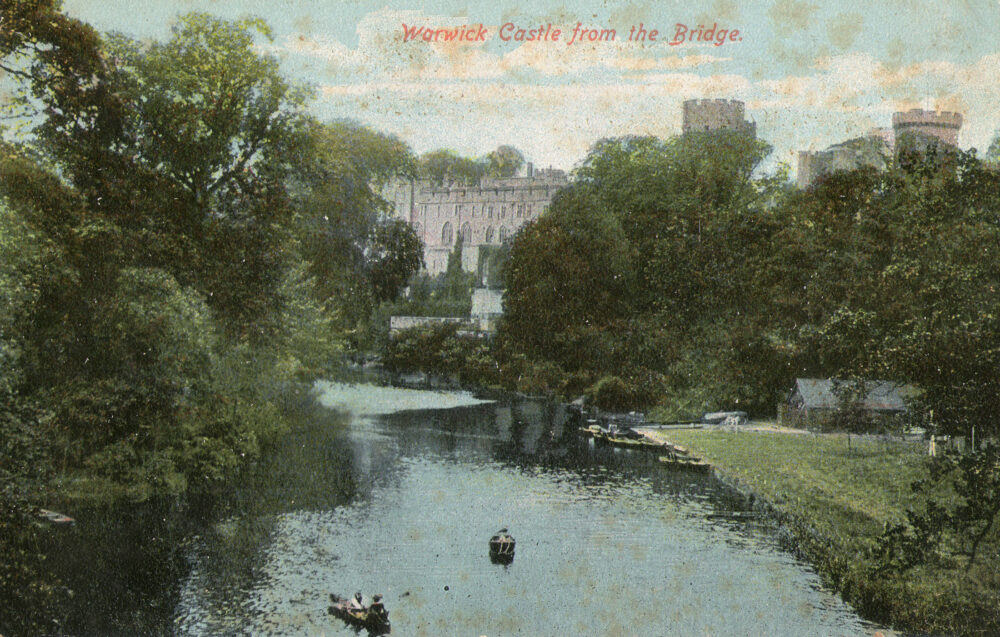 Warwick Castle is a medieval castle developed from a wooden fort, originally built by William the Conqueror during 1068. Warwick is the county town of Warwickshire, England, situated on a meander of the River Avon. The original wooden motte-and-bailey castle was rebuilt in stone during the 12th century. During the Hundred Years War, the facade opposite the town was refortified, resulting in one of the most recognisable examples of 14th-century military architecture. It was used as a stronghold until the early 17th century, when it was granted to Sir Fulke Greville by James I in 1604. Greville converted it to a country house.
Wikipedia.

Situated at a crossing point over the River Avon on the Fosse Way, an old Roman Road that was still in use in medieval times, there has been a fortification at Warwick for two thousand years. After the departure of the Romans, the Anglo Saxons established a fortified burh here which was extensive enough to withstanding assaults by the Danes. Around 1068, following the Norman conquest, a timber motte and bailey castle was built here by Henry de Beaumont who had been created Earl of Warwick. Rebuilt in stone in the latter half of the twelfth century, it was nevertheless poorly prepared for conflict when it saw action during the second Baron’s War (1264-7). Rebels from nearby Kenilworth Castle loyal to Simon de Montfort mounted a surprise attack on Warwick Castle and took the then Earl, William Maudit, captive.
Castles Forts Battles 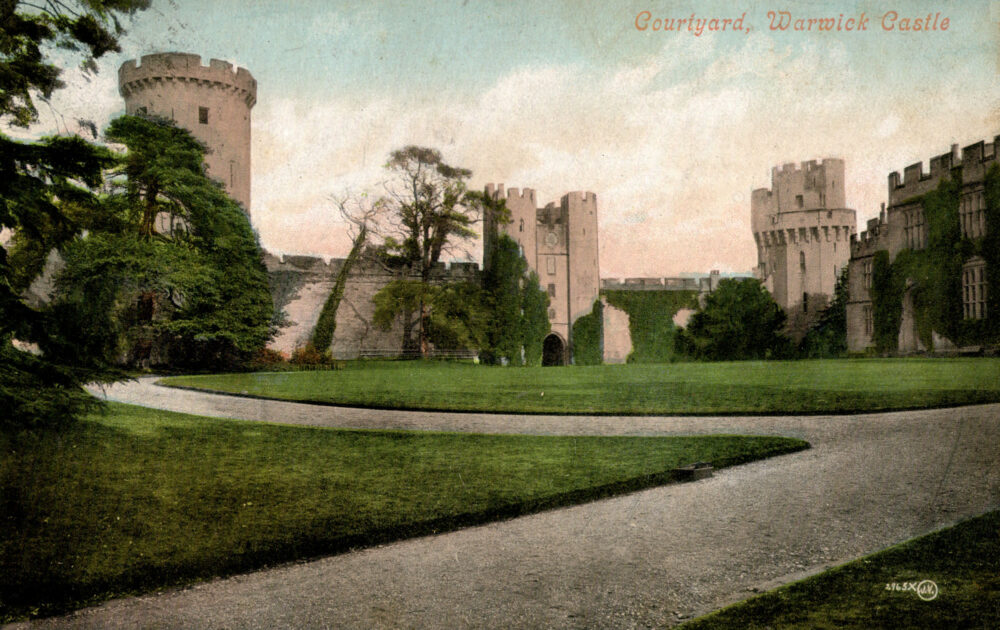 Caesar’s and Guy’s Towers are residential and may have been inspired by French models (for example Bricquebec). Both towers are machicolated and Caesar’s Tower features a unique double parapet. The two towers are also vaulted in stone on every storey. Caesar’s Tower contained a grim basement dungeon; according to local legend dating back to at least 1644 it is also known as Poitiers Tower, either because prisoners from the Battle of Poitiers in 1356 may have been imprisoned there, or because the ransoms raised from the battle helped to pay for its construction. The gatehouse features murder holes, two drawbridges, a gate, and portcullises – gates made from wood or metal. The towers of the gatehouse were machicolated.
Wikipedia. 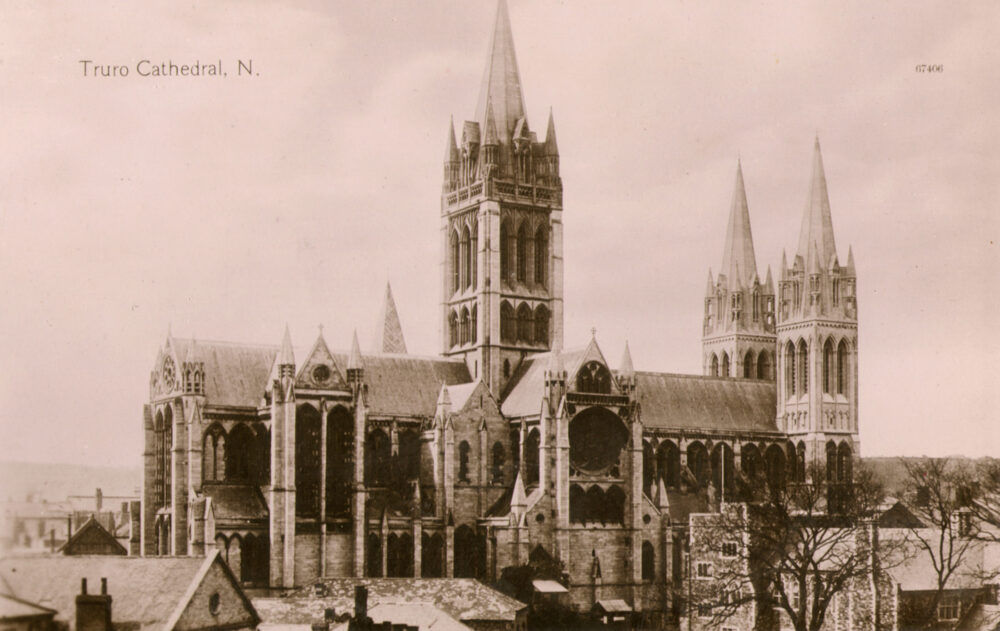 Truro was not the only candidate for the siting of a new cathedral. Lostwithiel had been the home of the Dukes of Cornwall; Launceston had once been the administrative capital of Cornwall, as had Bodmin. St. Germans, the site of the original see of Cornwall, also put forward a claim but was deemed to be too far east. The vicar of St Columb even offered his large church! Eventually, Truro was chosen, and St Mary’s parish church became the new cathedral. However, St Mary’s was never going to be large enough and planning started for a new cathedral. The leading architect John Loughborough Pearson, who had experience of cathedrals elsewhere, was commissioned to design the new Cathedral of the Blessed Virgin Mary. Work began in 1880.

The project was ambitious. Truro would be the first Anglican cathedral to be built on a new site since Salisbury Cathedral in 1220. For over 650 years no one had attempted to emulate the great cathedral builders of the medieval era. As well as this, it was initially uncertain if there would be enough money to complete such a project. The construction of the cathedral actually took thirty years. Foundation stones were laid on 20th May 1880 by the Duke of Cornwall, later King Edward VII, and work started immediately. There was an eleven year pause for further fund-raising between 1887 and 1898, but when work re-commenced things went ahead well. The central tower was finished by 1905 and the building was completed with the opening of the two western towers in 1910.
Truro Cathedral

Pearson’s design combines the Early English style with certain French characteristics, chiefly spires and rose windows. Its resemblance to Lincoln Cathedral is not coincidental; Pearson had been appointed as Lincoln Cathedral’s architect and the first Bishop of Truro, Edward Benson, had previously been Canon Chancellor at Lincoln. The central tower and spire stands 250 feet (76 m) tall, while the western towers reach to 200 feet (61 m). Four kinds of stone were used: Mabe granite for the exterior, and St Stephen’s granite for the interior, with dressings and shafts of Bath and Polyphant stone. The spires and turret roofs are of stone, except for a copper spire over the bell tower at west end of St Mary’s Aisle. The other roofs are of slate. The cathedral is vaulted throughout. Nathaniel Hitch was responsible for the decorative sculpture, including the reredos.

The original south aisle of St Mary’s Church survives, incorporated into the south-east corner of the cathedral and known as St Mary’s Aisle. It still functions as the city centre’s parish church. Three brasses were described by Edwin Dunkin in 1882: those of Cuthbert Sydnam (1630), Thomas Hasell (1567) and George Fitzpen, rector of the parish. As the cathedral is dedicated to the Blessed Virgin Mary, it has no Lady Chapel. A Jesus Chapel and the Chapel of Unity and Peace are reserved for quiet and prayer throughout the day.
Wikipedia. 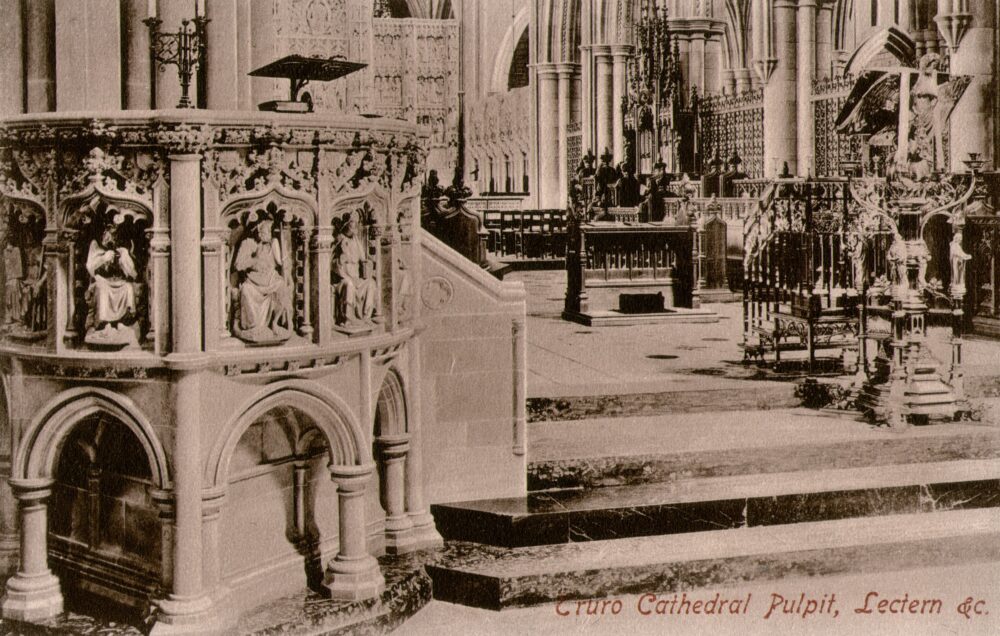