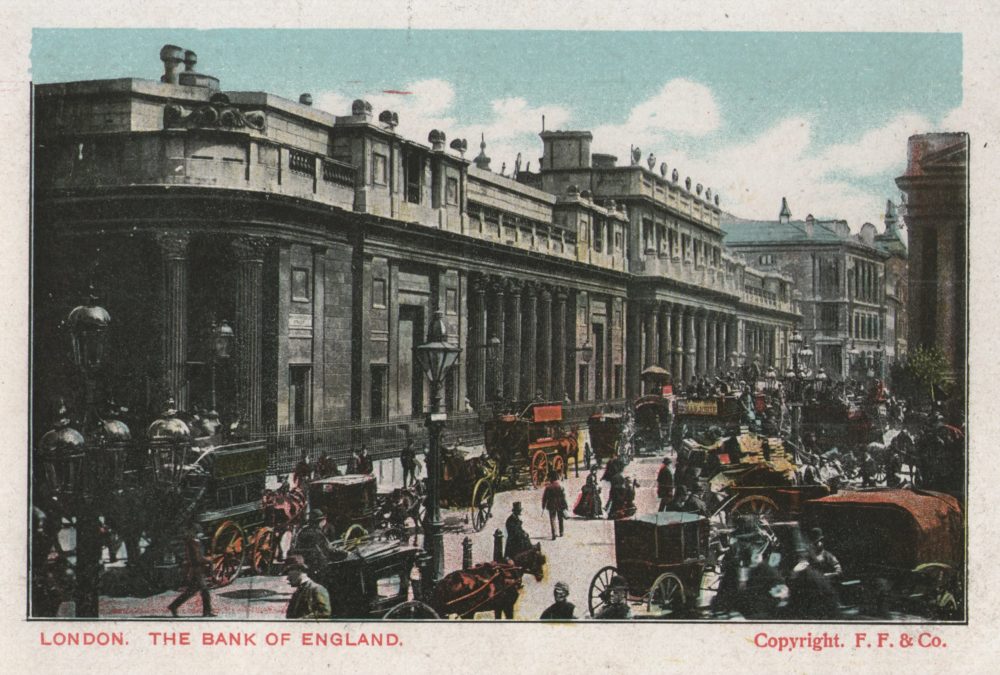 27 July 1694: The Bank of England began as a private bank that would act as a banker to the Government. It was primarily founded to fund the war effort against France. The King and Queen of the time, William and Mary, were two of the original stockholders. The original Royal Charter of 1694, granted by King William and Queen Mary, explained that the Bank was founded to “promote the public Good and Benefit of our People”. In essence, this is still used today in our current mission statement: “Promoting the good of the people of the United Kingdom by maintaining monetary and financial stability”. The Bank of England opened for business on 1 August 1694 in temporary accommodation in the Mercers’ Hall in Cheapside. It had a staff of just 17 clerks and two gatekeepers.
. . .
In 1734, the Bank of England moved to the site on Threadneedle Street where it still stands today. Slowly, over the next 100 years or so, the Bank bought adjacent properties until it owned the entire 3.5-acre site in the heart of the City of London. Our first architect George Sampson created the first purpose-built bank in the UK on the site. It was said to be Palladian in style, identified by its symmetry and classic design. Payment by the Bank to contractors for the balance of the new building in 1734 was £268, 17 shillings, and two pence.
. . .
Between 1925 and 1939, Bank of England architect Sir Herbert Baker demolished what had become known as ‘the old Bank’ or ‘Soane’s Bank’. The old Bank, designed by architect Sir John Soane, was regarded as one of London’s architectural gems. Sir Herbert built a new headquarters for the Bank of England on the same 3.5-acre Threadneedle Street site. The old Bank of England had mostly been no more than three storeys high. The new building stood seven storeys above ground, and dropped three below to fit in the extra staff needed to tackle the Bank’s rapidly increasing amount of work and responsibility.
Bank of England

Following images are from “Monumental classic architecture in Great Britain and Ireland during the eighteenth & nineteenth centuries”, Albert Edward Richardson, 1914, between pages 38 & 39, and 42 & 43.