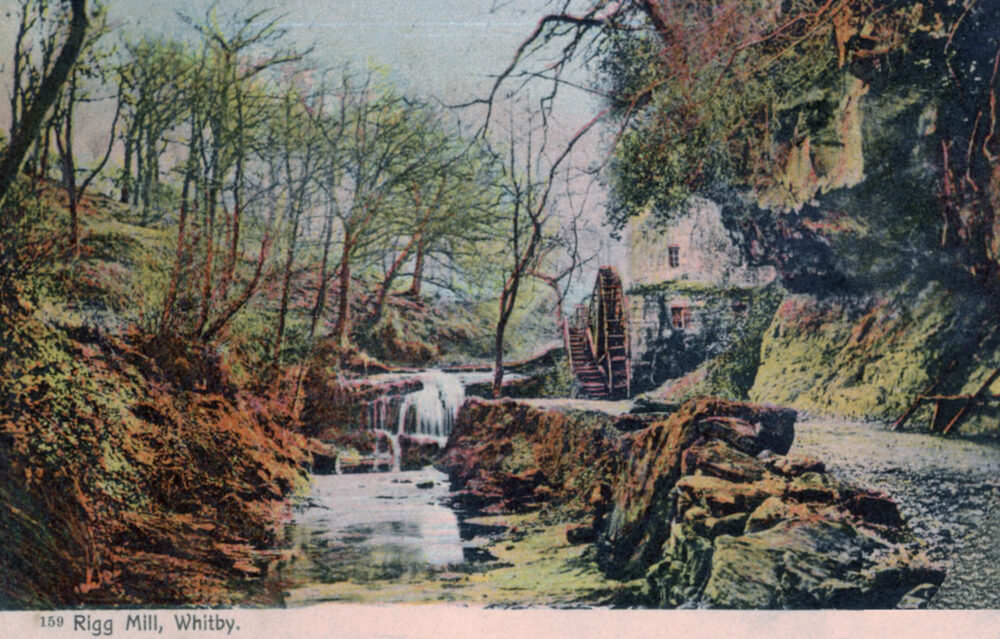 The River Esk, the northern boundary which separates the [Sneaton] parish from Whitby, is joined by Buskey Beck, the western boundary, and by Shawm Rigg’s Beck, which is part of the eastern boundary. Rigg Mill Beck forms the eastern boundary as far as its source at Soulsgrave Slack on Sneaton Low Moor. Rigg Mill, a picturesque ruin beside a waterfall in a wood, is possibly the ‘Agge Milne’ of the 11th century
“A History of the County of York North Riding: Volume 2”, 1923 (British History Online)

Here the tourist used to the spaciousness and comparative monotony of New World scenery will once more wonder at the quick transitions, the sudden leaps from scene to scene, that nature, in the picturesque shires of England, makes within limits so circumscribed. Breadth of horizon plays no part in the attractions of Rigg Mill. Wildness of heather and bracken and rock there is not, nor even noisy rush of water. The streamlet flows along cheerfully, but with low voice. The big mill-wheel ceased its turning and splashing a long while ago, long enough for the great wooden circumference to have reached just the ideal of ornamental decrepitude. The dell itself is a soft, serene spot that may win the fancy, but can never take by storm an eye on the lookout for large and florid effects of size and color. Turf and flowers and vines have the graceful trimness, the restrained abundance, that are attained only where climate fosters luxuriance but never rankness of growth. Rugged, gnarled, and wind-bent trees shut in this tiny vale on all sides. They stand on the hilltops like ancient sentinels guarding mill and granary, which, tempered in their turn with the infinite mellowness of age, show no trace of the spick-and-span newness that often clashes, in man’s work, with the venerable work of nature.
“A Poet’s Yorkshire Haunts”, Eugenia Skelding, The Atlantic August 1895