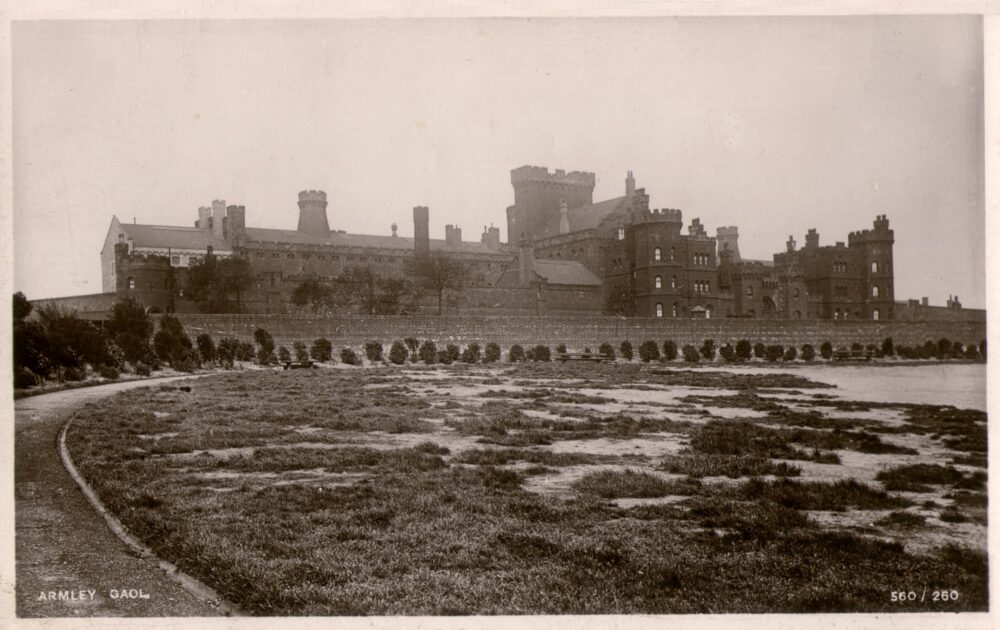 Construction of Leeds Prison (originally named Leeds Borough Gaol) was completed in 1847. Built from locally quarried stone, the prison originally had four wings radiating from a central point in a Victorian architectural style (known as ‘radial’) typical of the time. Each of these four wings had three landings of cells. Eventually Armley Gaol was renamed along with other prisons to make their locations more obvious to people unfamiliar with these areas.
Wikipedia.

Leeds Borough Gaol was completed in 1847 and originally it housed both male and female prisoners. Lilian Ida Lenton (1891 – 1972) was probably the most well-known female prisoner. She was an English Dancer, Suffragist and winner of a French Red Cross Medal for her service as an Orderly in World War I.
comment Mark’s History: The suffragist and dancer imprisoned in Armley’s jail

Armley prison opened in Leeds in the West Riding of Yorkshire in 1847 and was constructed on the then modern penitentiary principal with four radial wings. It was a grim and forbidding building in line with the Victorian ideas of prison and was responsible for housing prisoners sentenced in the West Riding of Yorkshire. It also took over duty of carrying out West Riding executions from York Castle. Ninety three men and one woman were to suffer the death penalty at Armley between 1864 and 1961. An average of almost exactly one per annum.
Capital Punishment U.K.

The grim and forbidding facade of the notorious Victorian jail has dominated the skyline of the proud town of Armley for over 160-years. Its presence spreads an air of notoriety through a town which across the years has grittily got on with its business and has a proud and fascinating industrial history with its clanking mills and bustling factories.
Yorkshire Magazine: Armley Jail– A history of the town and prison” 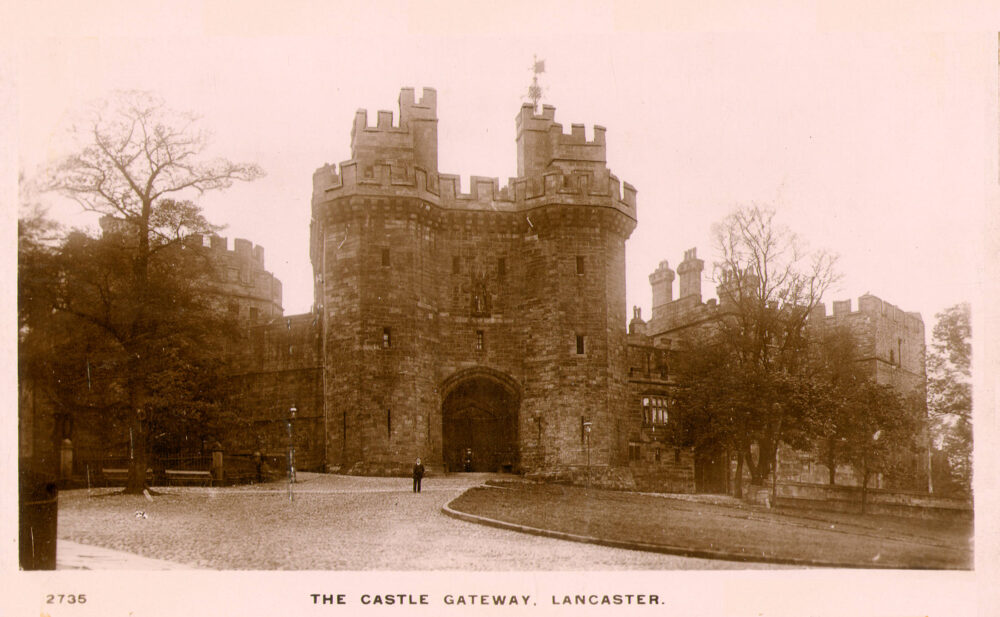 There was a Saxon timber fort atop a mound here when William the Conqueror granted Lancaster to Roger de Poitou. Roger rebuilt the castle mound in Norman style sometime around 1093. At the same time, he established a monastery, which lives on as Lancaster Priory, located immediately behind the castle. When Roger de Poitou took part in the ill-fated Barons Rebellion of 1102, Henry I seized his Lancashire estates and gave them to his nephew Stephen of Blois (later to become King Stephen). Henry may have begun the Great Keep, or that may have been the work of King Stephen, who succeeded him, or even of King David of Scotland, who administered Lancashire during Stephen’s long struggle with Queen Maud known as The Anarchy.

The Great Keep stands four storeys high and is built with walls 3m thick. It has two rooms on each floor and offered accommodation for the constable of the castle or his lord. There was enough space that the entire garrison could withdraw into the keep if the castle was under siege. The massive construction meant that the keep needed strong buttresses to keep the structure from collapsing under its own weight. There are buttresses at each corner and halfway along each side. Sometime around the end of the 12th century, a stone curtain wall was erected to encircle the keep. Towers were built at regular intervals along the wall.
Britain Express

The Honor, County, Town and Castle of Lancaster were granted by Henry III to his younger son Edmund, 1st Earl of Lancaster, in 1267. Lancaster Castle became a senior place of administration in the Duchy of Lancaster, with courts, a prison and offices. Through the centuries, the castle has held thousands of prisoners, including criminals of all kinds, political prisoners and individuals persecuted for their faith. In 1612, during the reign of King James I, the castle was at the centre of a notorious trial when ten people from the Pendle area of Lancashire, and nine other people from the area, were accused of witchcraft. The defendants were imprisoned and tried in the castle. Ten people were found guilty and hung on the nearby moor. In the late eighteenth century, the castle was substantially modified for use as a court and prison. During the same period, the medieval hall of the castle was demolished and a new building was constructed to house the Crown Court and Shire Hall.
Duchy of Lancaster

Castle, now prison and courthouses. Occupies part of the site of a Roman fort. Principal dates of construction of the surviving structure are c1150, when the keep was erected; c1200 (parts of Hadrian’s Tower, fragments of curtain wall running north and east from the tower, some masonry in the Gatehouse passageway, and the lower part of the Well Tower); early C15 (the Gatehouse and Well Tower). The upper storey of the keep is probably C15 and was re-modelled in 1585. Extensive additions were made from 1788 onwards to the designs of Thomas Harrison. The Governor’s house was the first of the new buildings. The former Crown Hall at the west was rebuilt and extended to the north to include a new Crown Court (1798) and circular Grand Jury Room. To the west a new Shire Hall was built on a 7-sided semicircular plan. The female felons’ prison was completed in 1793, and the male felons’ prison to the north was also built in the 1790s. Following a break, work continued under the supervision of JM Gandy in 1802: the interior of the Crown Court was completed, and the female penitentiary was added in 1818-21. The walls are of sandstone ashlar and rubble with roofs of slate and lead. All the buildings are linked to form an irregular polygon on plan with a central courtyard.
Historic England

The castle, of which we have caused a view to be engraved for the satisfaction of the reader [above], is thought to be one of the finest monuments of antiquity, that this kingdom can boast of; for the ditch was made by the command of the emperor Adrian, in the year 124, and a garrison was placed here by him ; who, for their better security, erected a tower towards the weft. In the year 305, Constantine Chlorus, father of Constantine the Great, built another handsome tower facing the town, both of which are now standing. After the Norman conquest, this castle was considerably enlarged ; and John, earl of Moreton and Lancaster, contributed the most to its grandeur, by erecting the beautiful tower, now called the Gatehouse. Afterwards, when he was king, he gave audience in it to the French ambassadors, and also here received homage from Alexander king of the Scot?, whom he had vanquished. It is at present the county jail, and the assizes have been held in it near five hundred years.
“A description of England and Wales, containing a particular account of each county etc.; Vol 5”, Newbery and Carnan, 1769

The great feature of the building is the superb gatehouse, 66 feet high, erected by John of Gaunt, partly with Norman materials. It has two fine octagonal flanking towers, a four-centred arch to the gateway and portcullis, a fine machicoulis carrying an allure, or rampart terrace, and a battlement. The oldest portion is the massive keep of Roger de Poictou, 80 feet square, with walls 10 feet thick; this too was much altered by John of Gaunt, but the original Norman windows are intact. The upper portion was rebuilt, temp. Elizabeth, though the S.W. turret is still popularly known as Gaunt’s Chair. There is a chapel in the basement, and the dungeons are places in two floors below the ground level. There are now four grand towers in all, the ancient dungeon tower on the S. side, which had been used as a debtors’ prison, having been demolished n 1812.
“The Castles of England: their story and structure, Vol 2”, James Mackenzie, 1896