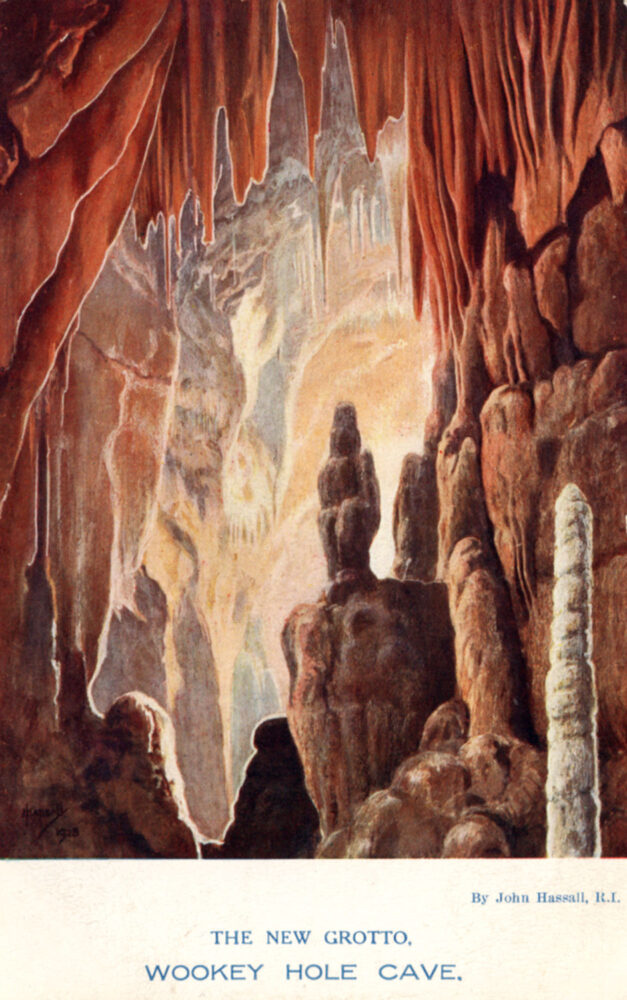 The caves at Wookey Hole first began to form when rain water percolated through the porous, sedimentary rock of the Mendip Hills. This process slowly began to create the chambers of the caves. . . . Wookey Hole Caves are formed of many sedimentary rocks, including limestone, sandstone and a natural concrete known as dolomitic conglomerate (or puddingstone). During the past 50,000 years, humans and animals have lived in and around Wookey Hole Caves. The caves provided a safe and, perhaps surprisingly, comfortable place to live, having dry spaces, being easy to defend, and at a constant temperature in winter and summer. We have found flint tools that were used by Neanderthals in the caves. . . . In 1927, Wookey Hole Caves first opened to the public. They had a totally different experience to that of visitors today. Only a few chambers were accessible.
Wookey Hole

Wookey Hole Caves are a series of limestone caverns, a show cave and tourist attraction in the village of Wookey Hole on the southern edge of the Mendip Hills near Wells in Somerset, England. The River Axe flows through the cave. It is a Site of Special Scientific Interest (SSSI) for both biological and geological reasons. Wookey Hole cave is a “solutional cave”, one that is formed by a process of weathering in which the natural acid in groundwater dissolves the rocks. Some water originates as rain that flows into streams on impervious rocks on the plateau before sinking at the limestone boundary into cave systems such as Swildon’s Hole, Eastwater Cavern and St Cuthbert’s Swallet; the rest is rain that percolates directly through the limestone. The temperature in the caves is a constant 11 °C (52 °F).

The caves have been used by humans for around 45,000 years, demonstrated by the discovery of tools from the Palaeolithic period, along with fossilised animal remains. Evidence of Stone and Iron Age occupation continued into Roman Britain. A corn-grinding mill operated on the resurgent waters of the River Axe as early as the Domesday survey of 1086. The waters of the river are used in a handmade paper mill, the oldest extant in Britain, which began operations circa 1610. The low, constant temperature of the caves means that they can be used for maturing Cheddar cheese.
Wikipedia 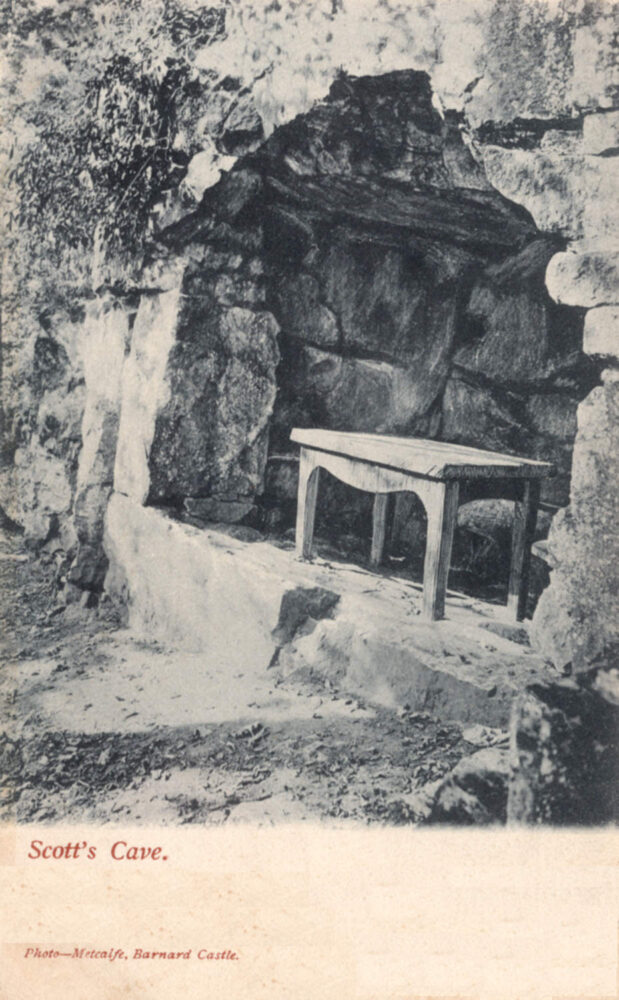 Rokeby has never had a formal or man-made garden. Instead it is blessed with a natural context of unrivalled beauty provided by the courses of the Greta and the Tees. The Tees runs from west to east half a mile to the north; the Greta from south to north a few hundred yards to the east. They converge at the Meeting of the Waters, a local beauty spot accessed along Mortham Lane. The last mile of the Greta runs through the Park. The walk along the Greta was described in 1769 as ‘romantic’ and in 1778 as ‘calculated for contemplation and religious rhapsody’. At all events, it provided the scenery for John Sell Cotman to paint on his visit in 1805 and for Sir Walter Scott to describe in his poetic history ‘Rokeby’ dedicated to J.B.S.Morritt and first published in 1813. The eagle-eyed will spot Scott’s Cave in the cliff face on the east bank. In Canto V he described the scene around him at eventide in words which describe it now:

“The stately oaks, whose sombre frown
Of noontide made a twilight brown,
Impervious now to fainter light,
Of twilight make an early night.
Hoarse into middle air arose
The vespers of the roosting crows,
And with congenial, murmurs seem
To wake the Genii of the stream;
For louder clamour’d Greta’s tide,
And Tees in deeper voice replied,
And fitful waked the evening wind,
Fitful in sighs its breath resign’d
Rokeby Park 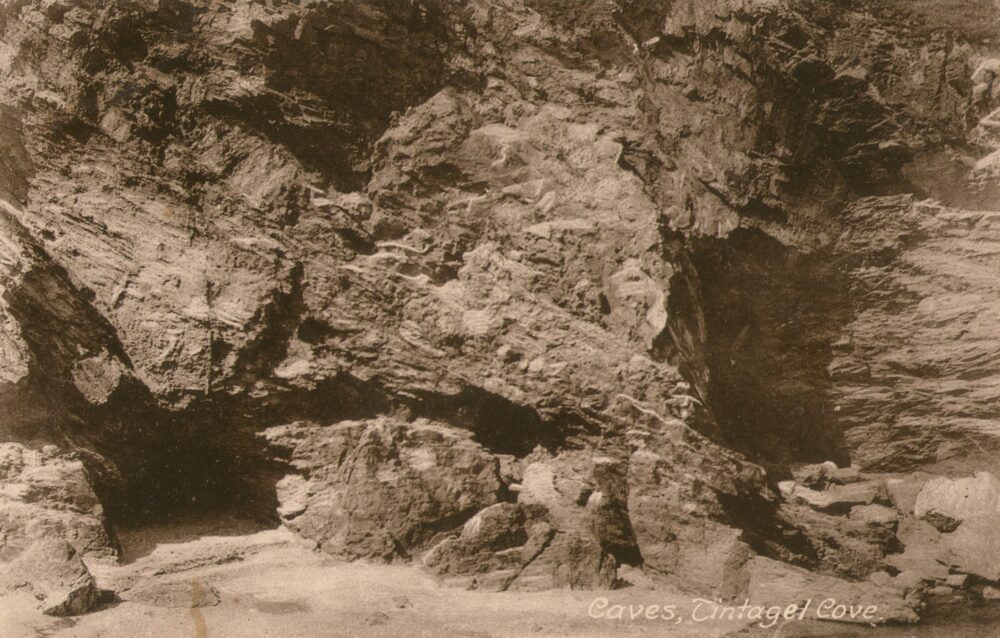 Merlin’s Cave is a 330-foot long cave that sits under the cliffs of Tintagel Castle. The cave passes completely through Tintagel Island from Tintagel Haven on the east to the west finally reaching West Cove. As a cave that lies by the sea, it fills up with water at high tide and can hardly be seen. Then, in low tide, the cave is revealed with a small beach near it.
Third Eye Traveller

Merlin’s Cave is a cave located beneath Tintagel Castle, 5 kilometres (3.1 mi) south-west of Boscastle, Cornwall, England. It is 100 metres (330 ft) long, passing completely through Tintagel Island from Tintagel Haven on the east to West Cove on the west. It is a sea cave formed by marine erosion along a thrust plane between slate and volcanic rocks. The cave fills with water at high tide, but has a sandy floor and is explorable at low tide. Tennyson made Merlin’s Cave famous in his Idylls of the King, describing waves bringing the infant Arthur to the shore and Merlin carrying him to safety.
Wikipedia. 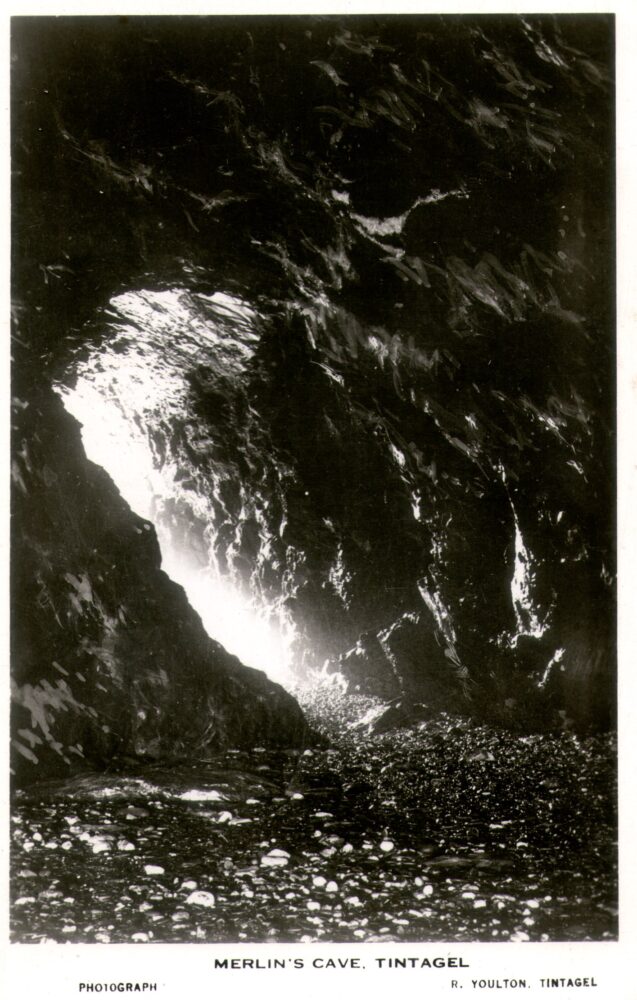