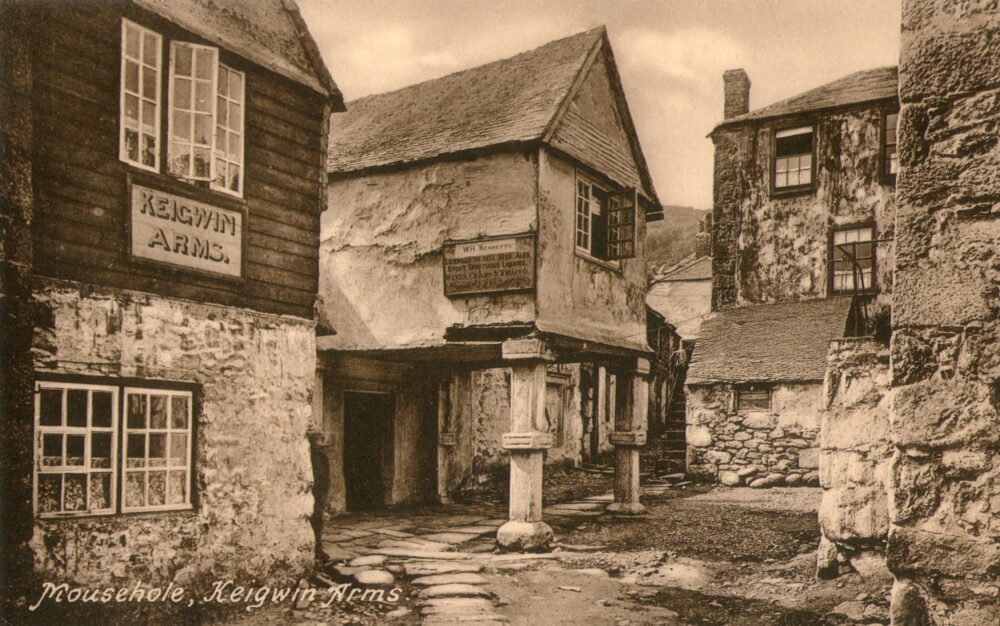 The Keigwin Arms was situated at 5-7 Keigwin Place. Featured in the TV series Poldark, this is the oldest house in Mousehole being built by most accounts in the 14th century and then having cost the life of Squire Jenkyn Keigwin in 1595 whilst defending it against the Spaniards. The cannon ball that killed him was found in the house and is in the Penzance museum along with his sword.
The Lost Pubs Project

Keigwin and Little Keigwin were both originally part of a 16th century Manor House. Keigwin has an interesting gabled wing which projects out and is supported on pillars. Mousehole was destroyed in 1595 during a raid on Mount’s Bay by Spaniard Carlos de Amésquita. This building is the only building that survives from before this date. It has a plaque with the wording “Squire Jenkyn Keigwin was killed here 23rd July 1595 defending this house against the Spaniards”. Amésquita was a naval office who raided Cornwall with four Spanish galleys during the Anglo-Spanish War. He also bombarded Penzance sinking ships in the harbour during what is known as the Battle of Cornwall. He eventually went back to Brittany, managing to avoid the counterattack by the English fleet, commanded by Francis Drake and John Hawkins.
Historic England 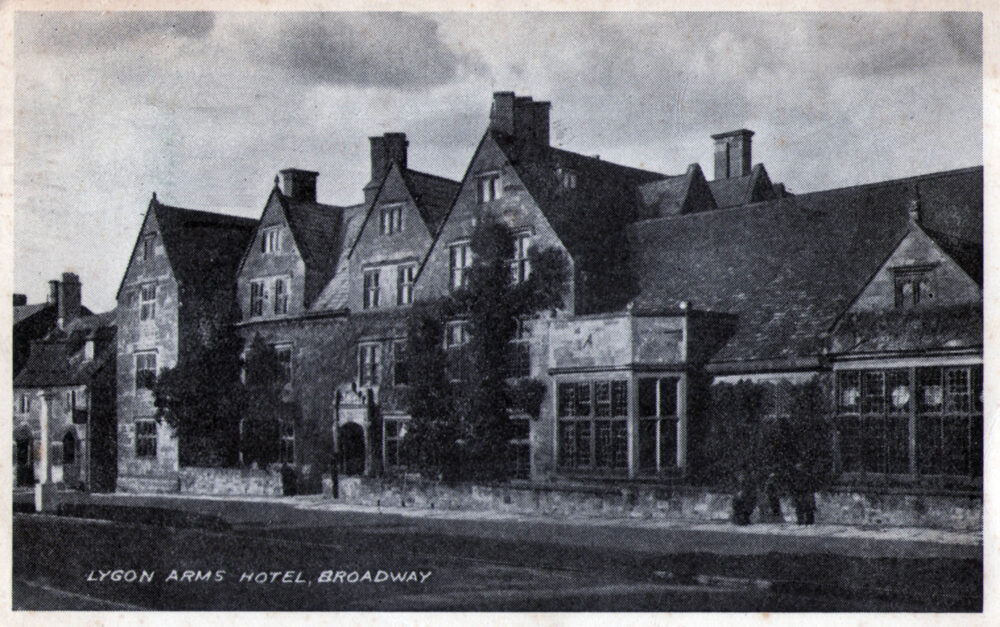 In the early 1900s, [entrepreneur, Sydney Bolton Russell] was a manager for the Midlands brewer Samuel Allsopp and Sons and travelled the country inspecting its public houses. On one of his trips, he came upon the Lygon Arms in Broadway. Although the village was liberally endowed with inns, many of them interesting historic buildings, he shrewdly recognised that the Lygon Arms stood apart due to its impressive size and imposing 16th-century frontage with four towering gables. This, he realised, had the potential to be more than just an inn relying on bar trade from locals. Ambitious and confident of his abilities and business acumen, Russell obtained financial backing, bought the building from the Allsopps and, in 1903, found himself owner of the property. Adopting the Cotswold country house of the Tudor and Stuart period as his model, he transformed the inn into a hotel of international repute. He recounted his happy and eventful experiences in his book The Story of an Old English Hostelry (1914)
Country Life

Owners have changed, names have altered, but visitors have always flocked to The Lygon Arms, a charming hotel enshrouded in history. The hotel’s name has changed throughout history, and the first written record refers to it as The White Hart, in 1377. The hart, a mature stag, was a personal symbol of King Richard II (1367 – 1400). The hotel’s name would change several times, reflecting the political changes of each era, showing how much history would shape the enchanting hotel. The coaching inn would come into its own when it would serve as a touch-stone for both sides of the English Civil War in 1649. The English Civil War pit Queen Elizabeth’s cousin Charles I against the forces of the English Parliament, and some of that played out within the very walls of The Lygon Arms itself.
The Lygon Arms 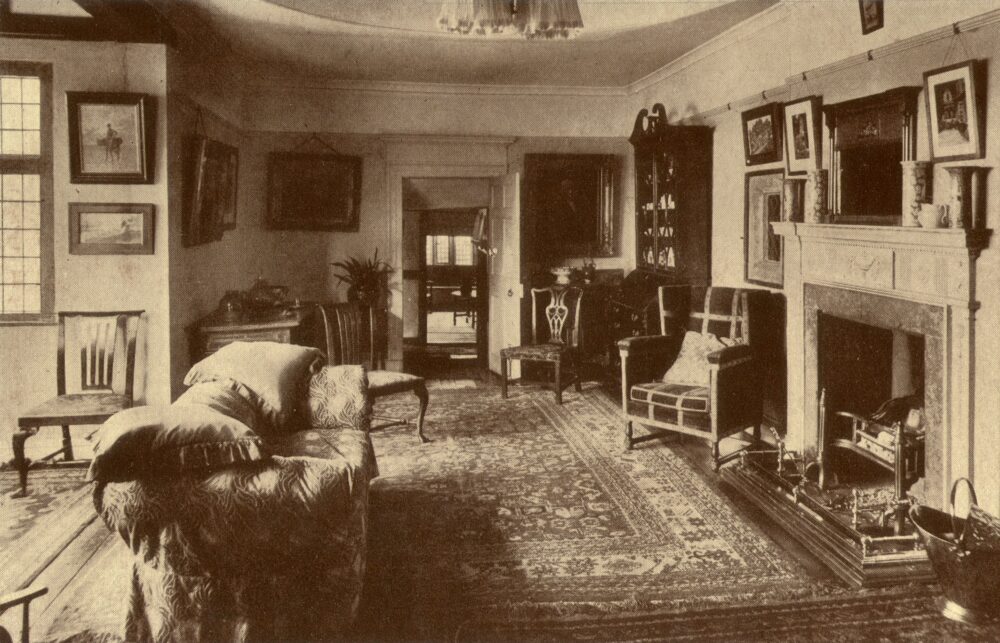 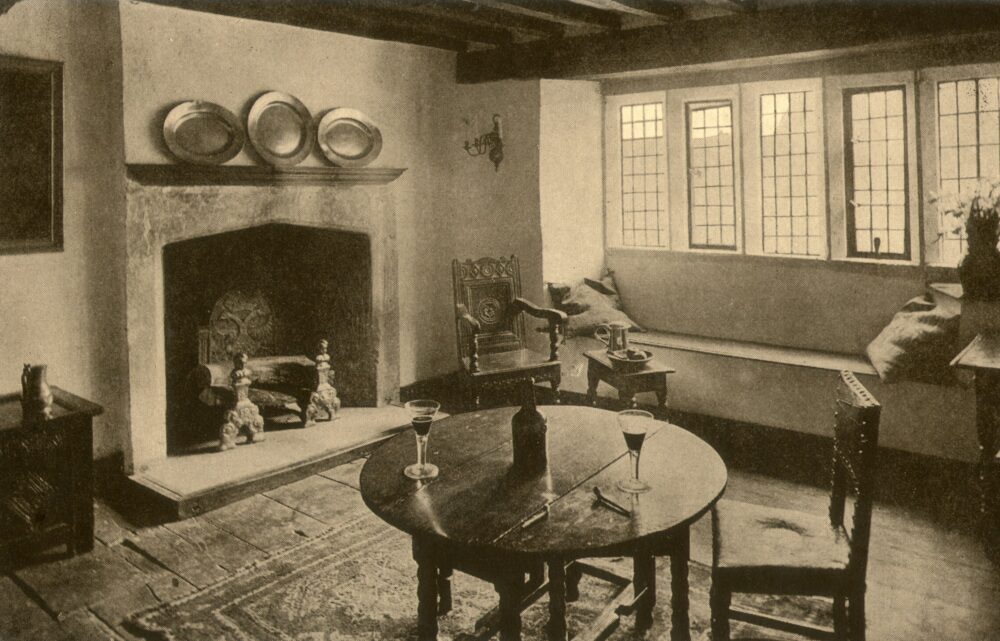 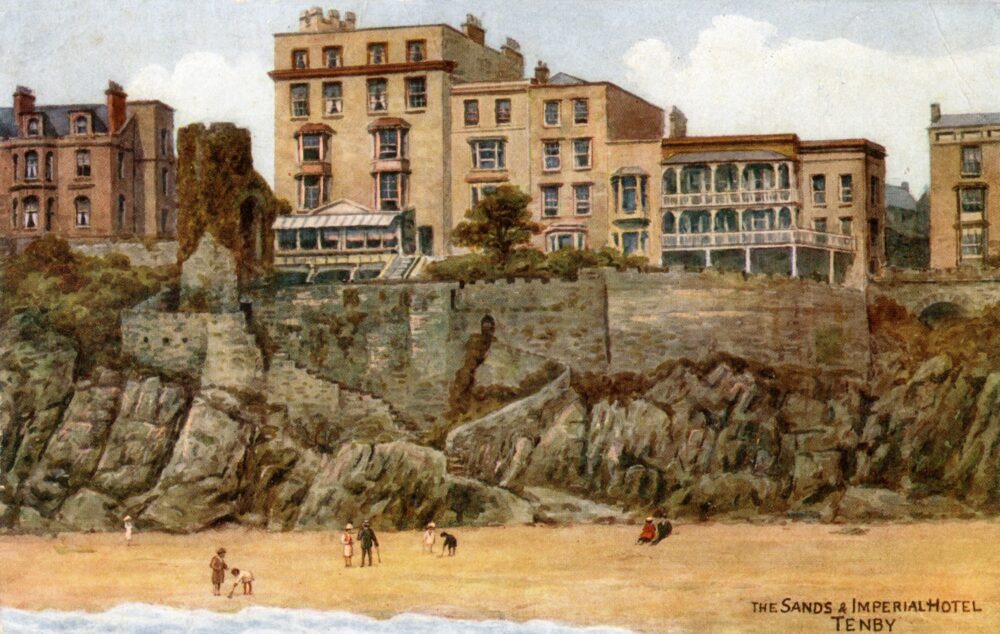 Originally a terrace of houses of circa 1835, built by Andrew Reed, known as Belmont Houses, with a two-storey range to the E apparently extended and remodelled in earlier C20. An engraving of 1832 by Reinagle shows the roof being put on Belmont Houses. Later they seem to have been known as Belmont Terrace, one being owned by the Earl of Limerick who had the Belmont Arch cut through the town walls for carriage access. No 2 was burnt in 1869. No 1 was known as Belmont Towers in 1904 when offered to let, and this included rooms built into a round tower of the medieval walls. It had 13 bedrooms and an alcoved drawing room. It was sold with Nos 2 and 3 to become the Imperial Hotel in 1905, lavishly renovated by Maples of London for the proprietor, M. Thierry-Mougnard. Further alterations by Maples are recorded in 1907, including a smoking-room in the style of Henri II of France. In 1912 a fire destroyed the roof and upper floors. A lounge over the clifftop was added in 1923.
British Listed Buildings

The Imperial Hotel was originally a terrace of houses, built circa 1835 and were known as Belmont Houses and later Belmont Terrace. An 1832 engraving by Reinagle shows the roof being put on Belmont Houses. In the 1860s the Earl of Limerick had the Belmont Arch cut through the town walls for carriage access. Belmont Arch is also known as Limerick Arch or Imperial Arch.
No 2 was burnt in 1869. No 1 was known as Belmont Towers. All three houses were sold to become the Imperial Hotel in 1905. It was heavily renovated in 1907 by Maples for its proprietor M. Thierry-Mougnard, designed to suit the demand for the highest standards and it was known for a time as Thierry’s Imperial Hotel.11 He had previously been assistant manager of London’s Hotel Cecil. The hotel was later taken over by his son, Mario, as mentioned in the illustrated brochure. A fire in 1912 destroyed the roof and upper floors. A lounge over the cliff top was added in 1923 and the building was heavily altered in the 20th century.
Facebook: Tenby Museum & Art Gallery 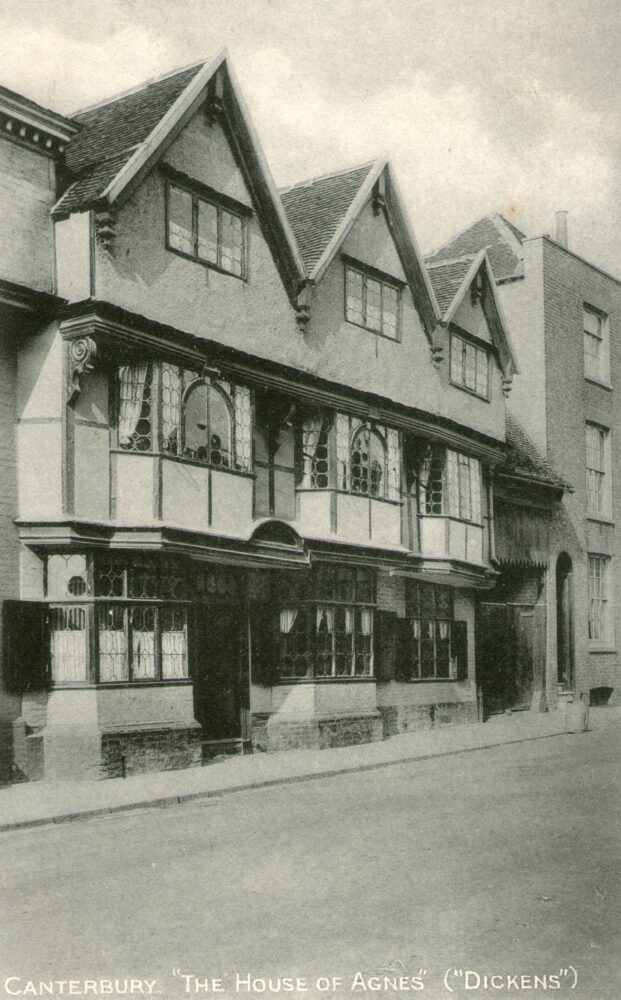 The history of the House of Agnes goes back in the days when it was a travellers inn as far back as the 13th Century, and is so named as it was the home of Agnes Wickfield in Charles Dickens’ story David Copperfield. Several passages in the book describe aspects of both the exterior and interior of our historic building.
House of Agnes

The inn was one of a number built just outside the Westgate built during the 16th century to exploit the trade generated by visitors to the city. Those who did not arrive before the nightly curfew would have stayed here overnight. It is a three storied jettied timber framed house with three gables to the street frontage. In the late 17th century the first floor bay windows with round-headed centres were added and in the 18th century two ground floor bay windows.
Canterbury History and Archaeological Society 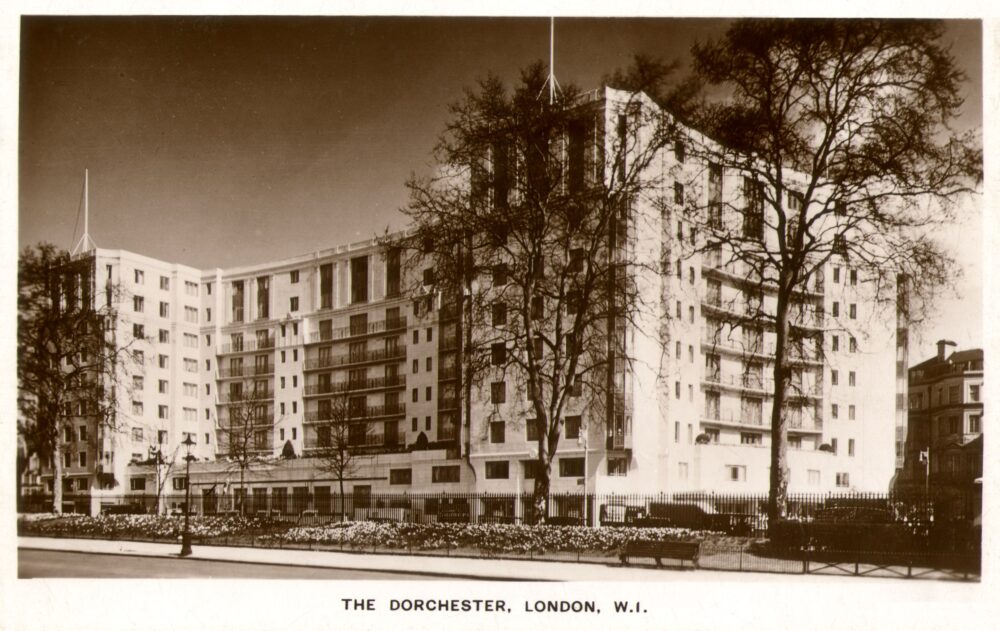 Sir Robert McAlpine created a vision for what he considered to be the perfect hotel. His vision became a reality when The Dorchester opened its doors on April 20, 1931. The state-of-the-art design was built in record time over 18 months, at the speed of a floor a week, to become the world’s first hotel to be constructed from reinforced concrete.
The Dorchester

Sir Owen Williams was commissioned to design the new hotel, using reinforced concrete to allow the creation of large internal spaces without support pillars, but he abandoned the project in February 1930 and was replaced with William Curtis Green. James Maude Richards, hired by Williams, served as an architectural assistant within the all-engineer staff. Percy Morley Horder, consulting architect to Gordon’s Hotels, had not been consulted during the design process and, after seeing the plan, resigned from the project, remarking to The Observer that the design was ill-suited for the location, assuming the concrete was to be left unpainted and that the insulation would be minimal. Some 40,000 tonnes of earth were excavated to make room for the hotel’s extensive basement which is one-third of the size of the hotel above the surface. The upper eight floors were erected in just 10 weeks, supported on a massive 3 feet (0.91 m) thick reinforced concrete deck that forms the roof of the first floor.
Wikipedia. 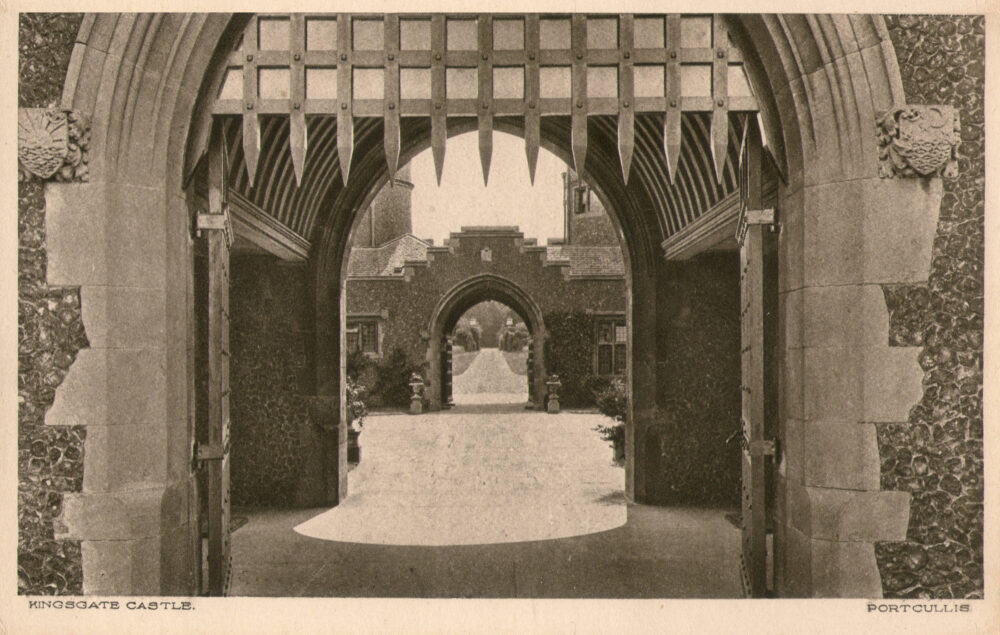 Kingsgate Castle on the cliffs above Kingsgate Bay, Broadstairs, Kent, was built for Lord Holland (Henry Fox, 1st Baron Holland) in the 1760s as the stable block of his nearby country residence Holland House. His main residence was Holland House in Kensington, near London. The name Kingsgate is related to an incidental landing of Charles II on 30 June 1683 (‘gate’ referring to a cliff gap) though other English monarchs have also used this cove, such as George II in 1748. The building was later the residence of John Lubbock, 1st Baron Avebury.
Wikipedia.

Kingsgate Castle after having been several times tenanted by Royalty, became the home of the late Lord Avebury, better known as Sir John Lubbock, the naturalist. Since then it has been converted into a hotel.
The Sydney Morning Herald, 13 January 1934

Henry Fox, more latterly Lord Holland, had been villified for reputedly milking the public purse while Paymaster General during the American wars of independence. Some £50 million was estimated to have passed through his hands, much of which it was said remained in his own pocket and was used to build his sumptuous homes – including his Kingsgate residence where he intended to retire. . . .Designed by the amateur architect Sir Thomas Wynne and with the works partially overseen by John Luke Nicholl, a permanent official at the Pay Office where Fox had been in charge, Kingsgate – as it was now generally known – clearly held a special place in the heart of the elderly peer. For almost immediately he set about adorning the then sumptuous estate with statues and other artifacts specially imported from Italy and which were landed directly at his private bay below. Giant lions, saluting guns and other visual attractions were there to greet the visitor, while dotted along the adjoining coastline were a series of flint ‘conceits’ – follies, including the Gothic ruin that was later to become Kingsgate Castle. . . . Presumably to show off the estate to others who had not yet visited, Fox also commissioned two celebrated engravers James Basire and BT Pouncy to produce around a dozen etchings of Kingsgate and its surroundings, which at that time spanned hundreds of acres, stretching as far as and including Quex Park. From these series of views, made around 1768 onwards, we can still appreciate the full splendour of Fox’s seaside haunt, with the etchings often revealing the original contours of what was eventually to become Kingsgate Castle, but at the time was simply an imitation of a medieval castle from Edward I’s reign. The castle, standing directly opposite the main Holland House residence, was clearly the centrepiece of Fox’s assembly of Gothic edifaces.
Secrets of Kingsgate Castle