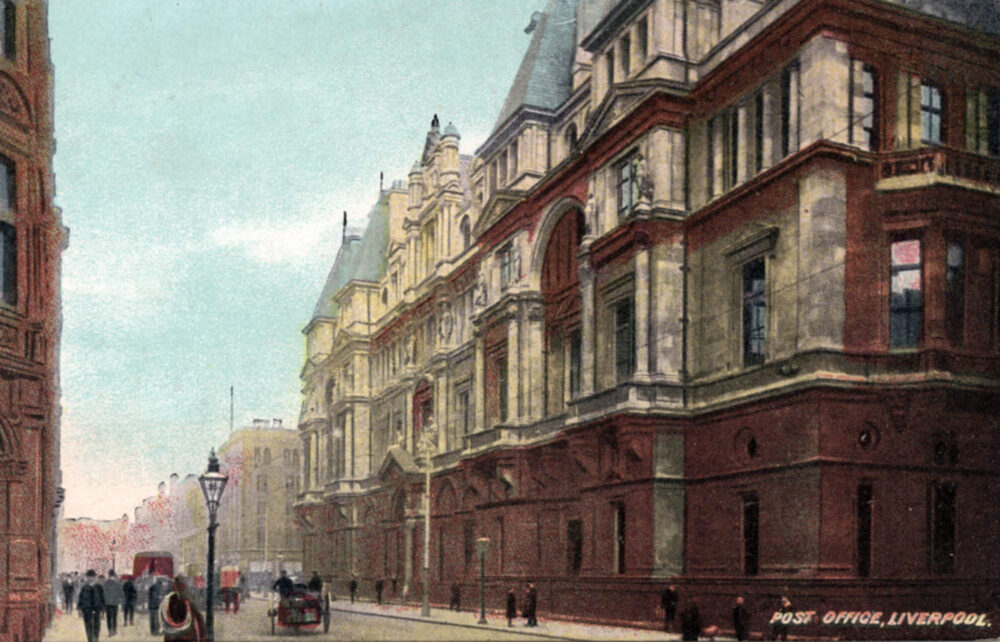 For much of the 19th century the General PostGlossary Term Office was located in the Custom House in Canning Place, until this specially designed building was constructed in Victoria Street between 1894 and 1899. The architect was Henry Tanner, a Principal Architect (Chief Architect from 1898) in the Office of Works, whose other postal buildings include the contemporary General PostGlossary Term Office in Leeds. The Victoria Street building was exceptionally ambitious, originally resembling a Loire chateau with an eventful skyline of shaped gables, chimneys and pavilionGlossary Term roofs. The decoration included sculpture by Edward O. Griffith around the main entrance. Unfortunately, the upper floors were removed following bomb damage in the Second World War, and the interior was gutted
Looking at buildings

The new Post-office in Victoria-street was opened on Wednesday by the Duke of York. The building has a frontage to Victoria-street of 226ft., to St. Thomas-street of 254ft., to Stanley-street of 260ft., and has a yard comprising 103ft. square. The site covers nearly two acres of ground. In front of the second floor there are four figures representing England and Scotland and Ireland and Wales, the two pairs standing hand-in-hand. There are ten smaller figures, representing colonies. Below there are figures typifying Commerce and Industry, and Electricity and Engineering. The total cost of the site, including premises in Cumberland-street and Whitechapel, will be about £200,000, and another £100,000 or thereabouts will be required for building purposes, and for supplying fittings, engines, electric-light wires, and pneumatic tubes. The building is considered absolutely proof against fire, very little woodwork being used, except in the way of furniture and fittings.

The new buildings contain the following offices : Public, sorting, packet, parcel, and registered-letter offices; postmen’s room, returned-letter branch, telephone-room, telegraph-instrument room, yard, bag and basket-room, and telegraph messengers’ and delivery room. On the second floor are the scullery, kitchen, and carving, serving, and dining-rooms, the latter measuring 30ft. by 73ft., and having seats for 190 persons. The walls of these rooms, and of all the staircases and retiring-rooms, are of white glazed bricks, with dado of dark tiles. The inner vestibule and the postmaster’s staircase, inside the west door in Victoria-street, are of Hopton Wood marble. The doors are of teak, and the public office counter of sabicu (a hard Cuban wood), the other fittings being of mahogany.
“The Building News”, 21 July 1899 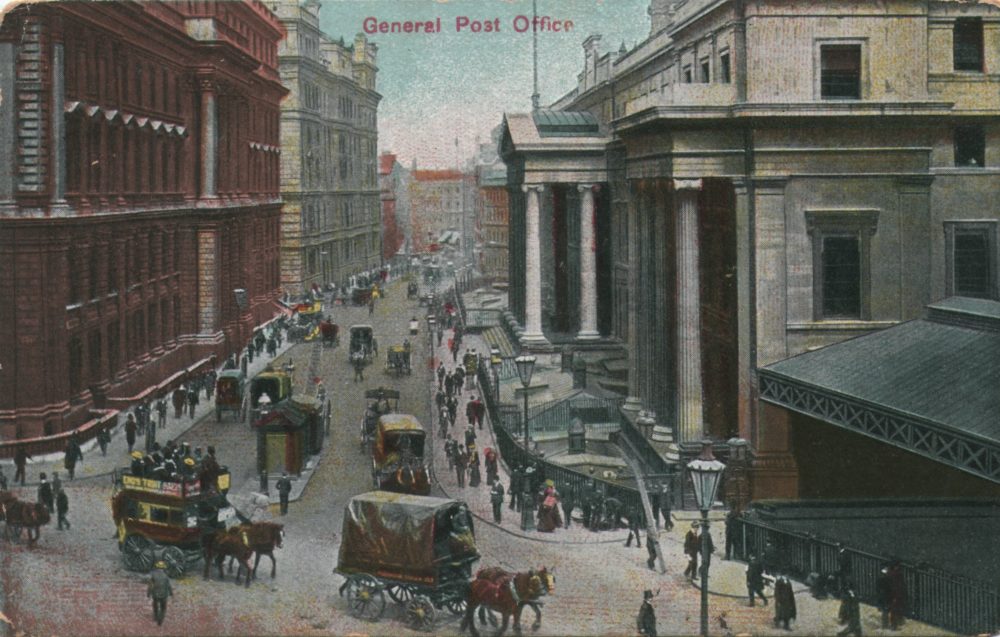 Originally known as the General Letter Office, the headquarters for the General Post Office (GPO) was built on the eastern side of St. Martin’s Le Grand in the City of London between 1825 and 1829, to designs by Robert Smirke. . . . It was built in the Grecian style with Ionic porticoes, and was 400 feet (120 m) long and 80 feet (24 m) deep. The building’s main facade had a central hexastyle Greek Ionic portico with pediment, and two tetrastyle porticoes without pediments at each end. The main interior was the large letter-carriers’ room, with its elegant iron gallery and spiral staircase.

While externally attractive, however, the building suffered from internal shortcomings. Poor layout meant that work requiring bright light was conducted in poorly illuminated areas; odours spread from the lavatories to the kitchens, while the combination of gas lighting and poor ventilation meant that workers often felt nauseous. The expansion of the work of the Post Office also meant that by the later 19th century it was occupied well beyond its intended capacity; The Times reported in 1860 that “rooms have been overcrowded, closets turned into offices, extra rooms hung by tie rods to the girders of the ceiling”. . . The original Smirke building was closed in 1910 and demolished in 1912.
Wikipedia

The story goes back to the era before Rowland Hill’s Penny Post and had its opening chapter during the glory days of the mail coach. The Post Office had been established in the City since the mid-17th century but it was in 1829 that the Post Office moved from cramped premises in Lombard St to a new home in an imposing neoclassical building nearer St Paul’s. Situated on the east side of St Martin’s-Le-Grand it was Grand by address, grand in design and become known fondly as ‘The Grand’ by its occupants. The new building housed the Postmaster General, The Secretary and his administrative staff together with the main sorting offices for mail for London, the provinces and overseas. The building, designed by Robert Smirke, was the best known public face of the Post Office in London throughout the Victorian period. After much internal alteration to cope with the enormous growth in business, it was eventually – and controversially – demolished in 1912-13.
The Postal Museum