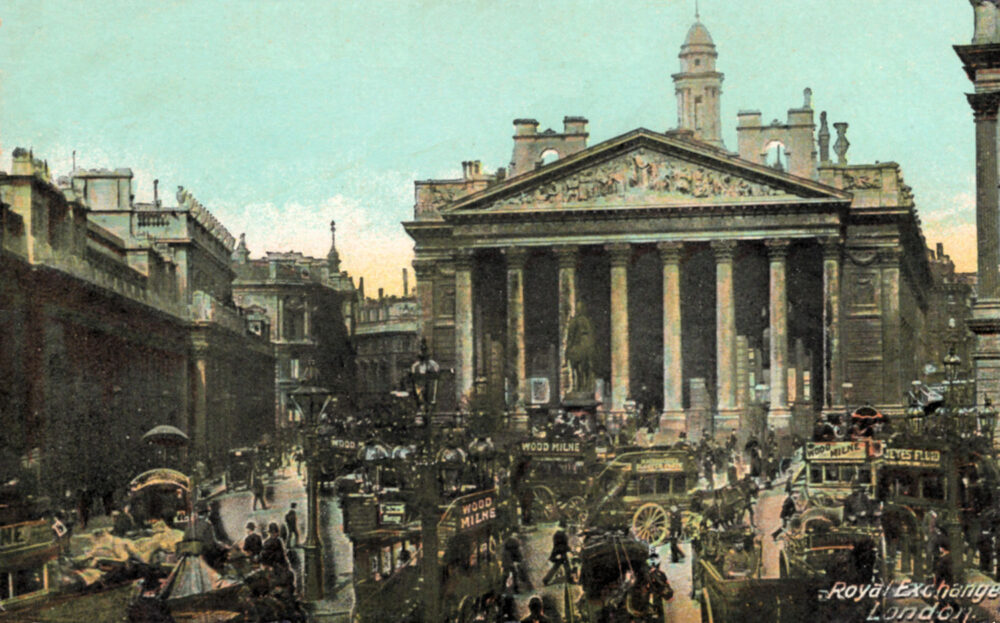 The Royal Exchange in London was founded in the 16th century by the merchant Sir Thomas Gresham on the suggestion of his factor Richard Clough to act as a centre of commerce for the City of London. The site was provided by the City of London Corporation and the Worshipful Company of Mercers, who still jointly own the freehold. It is trapezoidal in shape and is flanked by Cornhill and Threadneedle Street, which converge at Bank junction in the heart of the city. It lies in the ward of Cornhill. It has twice been destroyed by fire and subsequently rebuilt. The present building was designed by Sir William Tite in the 1840s. The site was notably occupied by the Lloyd’s insurance market for nearly 150 years.
Wikipedia

Based on the Antwerp Stock Exchange (Bourse) in Belgium, Gresham’s bourse consisted of a trading floor, offices and shops around an open courtyard where merchants and traders could meet and conduct their business. The original Royal Exchange building was completely destroyed by the Great Fire of London in 1666
Walk London

This month [January 2021] marks the 450th anniversary of the opening of London’s Royal Exchange, a complex created to act as a commercial centre in the City of London. The exchange was built on the orders – and with the funds – of the merchant Sir Thomas Gresham at a site on the junction of Cornhill and Threadneedle streets which was – and still is – jointly owned by the City of London Corporation and the Worshipful Company of Mercers. Drawing inspiration from the Antwerp Bourse, credited as the oldest financial exchange in the world (and where Sir Thomas had served as an agent of the crown), the Royal Exchange was built in ranges around a central courtyard and designed by an architect from Antwerp. … Gresham’s original building – to which two floors of retail had been added in 1660, creating what is said to have been England’s first shopping mall – was sadly destroyed in the Great Fire of London in 1666. It was replaced by a second complex, this time designed by Edward Jarman, in 1669, but this too succumbed to fire, this time on 10th January, 1838. The building which now stands on the site – and is now an upmarket retail centre – was designed by Sir William Tite and was opened by another Queen, Victoria, in 1844.
Exploring London