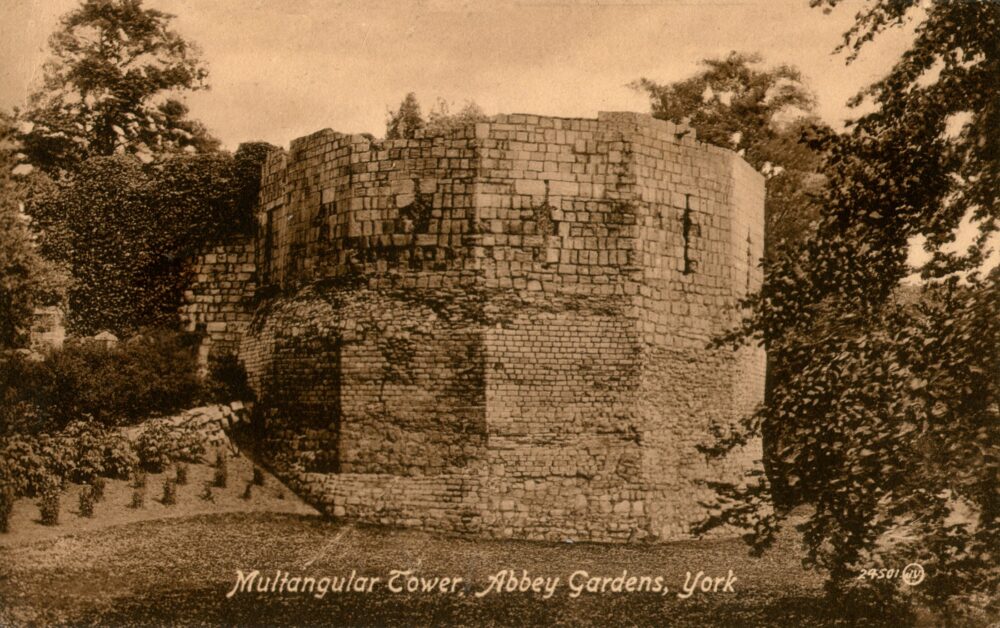 The Multangular Tower is the best example of standing Roman remains in York. It is on the northern side of the gardens, between the Yorkshire Museum and St Leonard’s Hospital. You can see the tower and fine stretches of the fortress wall from both sides, inside and out. The tower stood at the west corner of the legionary fortress. It was one of the two corner-towers of the huge stone wall that looked down onto the river. The small stones in the lower half are Roman whereas the upper half was reconstructed in the medieval period. The original Roman parts of the tower probably date from the early third century. Archaeologists can tell that the stone walls replaced timber fortress structures: an immense undertaking. The Romans used several types of stone in their buildings including limestone, tough millstone grit and elland stone, now better known as York stone, which was used for floors and roofs as it splits naturally into flat slabs. But it was not so much the stone but the use of mortar to hold it together that was the real Roman revolution. This allowed for the creation of far larger buildings than ever seen before.

The fortress wall was built 5m (c.15 ft) high. At the west corner stood what we now know as the Multangular Tower, which may have been well over 10m (c.30 ft) high. A matching tower stood at the fortress’s south corner, with six interval towers in between, projecting from the wall. These corner and interval towers were a military innovation, as they enabled soldiers to fire along the sides of the wall as invaders tried to scale them. In practice, the Roman occupiers probably never expected an attack on Eboracum. The fortress was mainly a base from which to control the region.

We know very little about the medieval rebuilding and reuse of the tower but the fortifications were significant during York’s role in the English Civil War and damage from a cannon ball can be seen in the wall to the North of the tower.
York Museums Trust 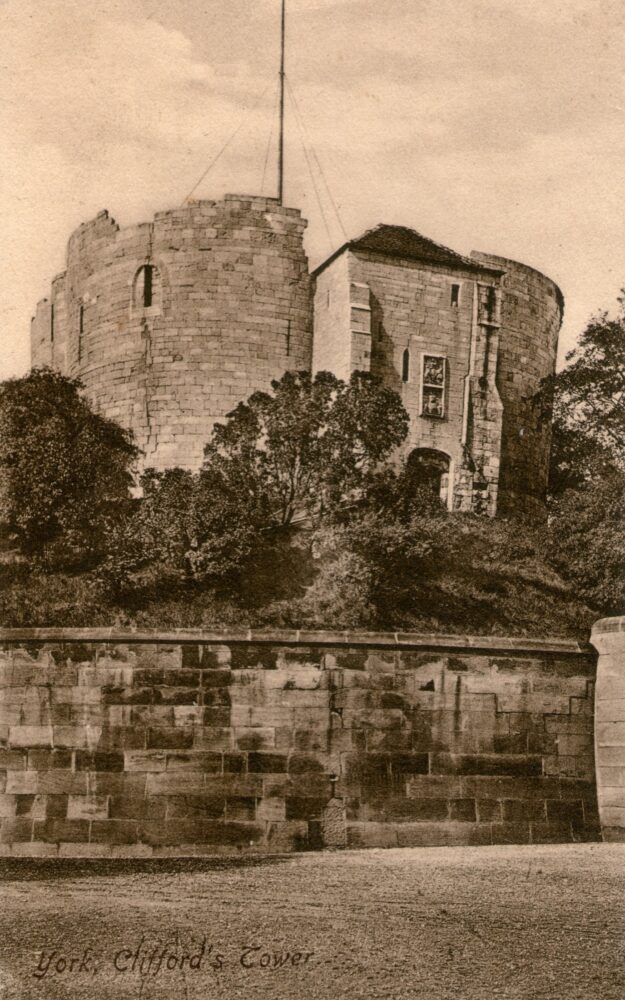 Much of York’s layout is the result of Roman and Viking construction but one iconic feature is distinctly Norman. The original mound of Clifford’s Tower, with a timber structure at the top, was constructed by William the Conqueror in 1068 as a statement of his power over the region. This building stood for just over a century before being burnt down in one of York’s bloodiest and tragic moments, when, in 1190, 150 Jews were massacred on the site.

Between 1190 and 1194, it was repaired at great expense, and the mound was raised to its present height. The second timber structure was destroyed (this time by a gale) in 1245. Under pressure from his wars with the Scots, Henry III ordered the tower to be rebuilt and strengthened, this time in stone. Master Simon of Northampton and Master Henry of Reynes, the senior carpenter and stonemason respectively in Windsor Castle, were sent up to York to consult on the new design of the castle. The result was a tower some 50ft (15m) high and 200 ft (61m) in diameter. Its design is ‘quatrefoil’, with four overlapping circles, resembling a four leafed clover.
History of York

Clifford’s Tower is the largest and most visible survival of the medieval castle of York. Remains of the curtain wall and several mural towers may also be seen along the southern parts of the site. The castle seems to have been used more for coercive functions than as a royal residence – the king was generally lodged at the archbishop’s palace.[1] It played an especially important role in the government of the north of England, housing a gaol, a mint and law courts. Indeed, during episodes of intense Anglo-Scottish warfare other functions of central government, such as the Exchequer, were temporarily housed here and the tower was pressed into service as a treasury.
English Heritage 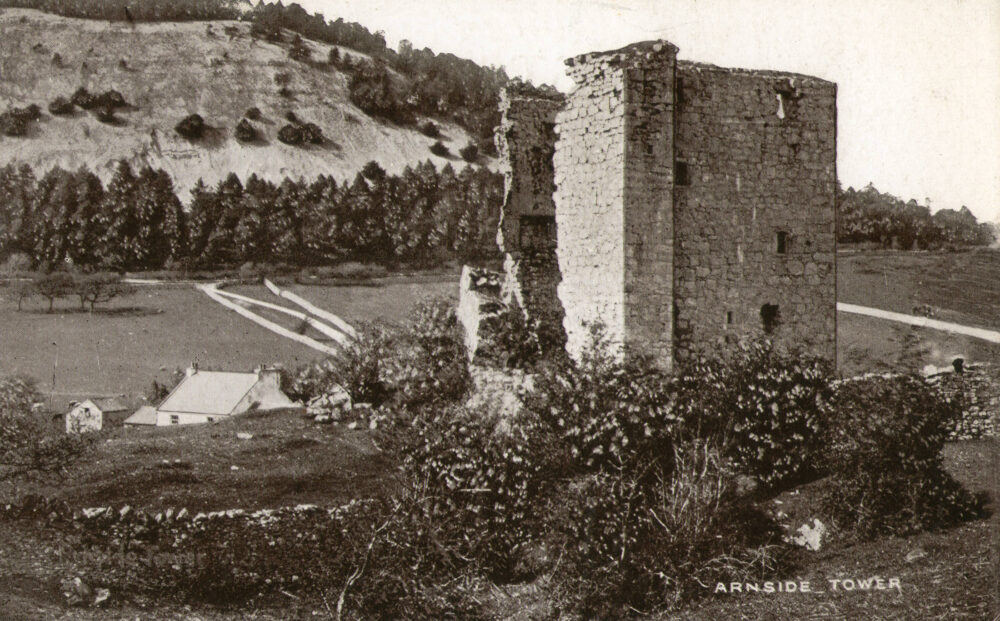 Peles were smaller, less well fortified, then castles. They were intended to counter lightly armed raiders rather than to withstand a siege by a properly equipped army. . . . Pele Towers tended to conform to a pattern. They were usually three storeys high, but Arnside had four. The ground floor contained the dairy and store rooms. Stone steps led to a first-floor entrance, with a heavy oak door and a protective iron grille. Fire-places and latrines were built into the walls, which were up to 10 feet thick. A spiral staircase connected the floors.
Beating the Bounds (from from “In and Around Silverdale” by David Peter)

Situated about a mile and a half outside of Arnside, and to the South East of Arnside Knott, Arnside tower is a spectacular and almost unique example of a Cumbrian pele tower. The oldest building in the parish, the tower was built in the late 14 or early 15th century, and was a free standing tower (most pele towers had outbuildings or were attached to a house or hall of some sort). The tower would originally have been four and five storeys tall, however due to systematic dismantling and weathering and age, it is now both roofless and floorless. The tower was severely burned in 1602, probably through a domestic fire rather than as the result of an attack, but was repaired and then occupied. Between 1684 and 1690, the dismantling occurred, with building materials being removed to Beetham and Knowsley.
Visit Cumbria