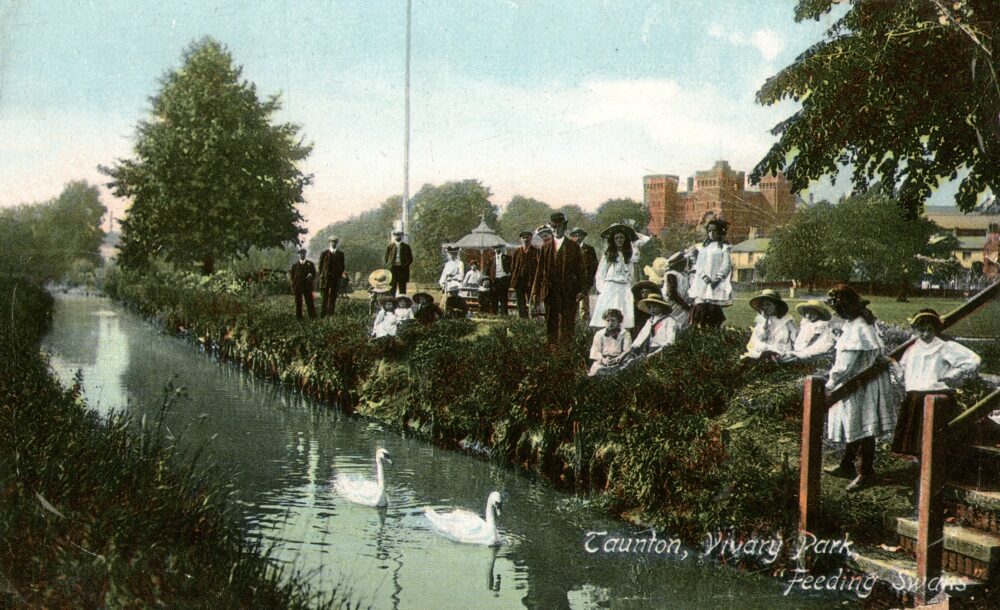 Google Street View (approximate, stream is in the other direction)

The public park came about because it’s so close to the centre of the town. The land had been used as for public events since at least 1851 when the first Taunton Flower Show was held there. It was sold to the council in 1894 and a year later it was laid out. The front gates, bandstand and one shelter date from this time. In 1902 an oak tree was planted close to the bandstand to mark the coronation of Edward VII. With money left over from the celebrations, the fountain was commissioned as a memorial to the late Queen Victoria. It was unveiled in 1907. The park originally formed a part of the open setting to Wilton house. The park was extended to include part of the garden of Wilton House in 1924. Vivary Park is a good surviving example of a late Victorian public park.
Somerset West and Taunton Council

The park stands on land that was formerly a medieval fish farm, or vivarium, for Taunton Priory and Taunton Castle. Although nothing remains above ground of these lakes, they are the origin of the name Vivary. . . . Long before the park was publicly owned, it was known as Vivary Park and was used for some public events. It was lent by William Kinglake to provide the site of the West of England Show of 1852. He was also sympathetic to the Bristol and Somerset Total Abstinence Association and allowed the park to be used for its Public Tea Meeting and Demonstration on 17 August 1852. The first exhibition of the Vale of Taunton Deane Horticultural and Floricultural Society was held in the park on 21 and 22 June, 1855, and in 1883 a ten-day ‘Temperance mission’ was held in the park, at which “as many as 1,500 new pledges” of abstinence from alcohol were made. . . . Two decades [after 1875, Vivary Park was still owned by the Kinglake family, but in 1894 they sold it to the Municipal Borough of Taunton for £3,659 (equal to around £230,000 in 2010), to encourage healthier lifestyles and to provide recreational opportunity for the urban working class, as set out in the Public Health Act of 1875.

The arrangement of the park is still very much as was when first laid out in 1895. It is entered through a pair of cast iron gates, dating from 1895, made by the Saracen Foundry of Glasgow, who also made the Queen Victoria Memorial Fountain of 1907. Since 2000 the fountain has been restored, with funding from the Heritage Lottery Fund, and the park was re-opened by Queen Elizabeth II in May 2002. The bandstand also dates from 1895, while two huge oak trees were planted in 1902 to mark the coronation of King Edward VII. Just within the main gates, the war memorial was erected in 1922.
Wikipedia. 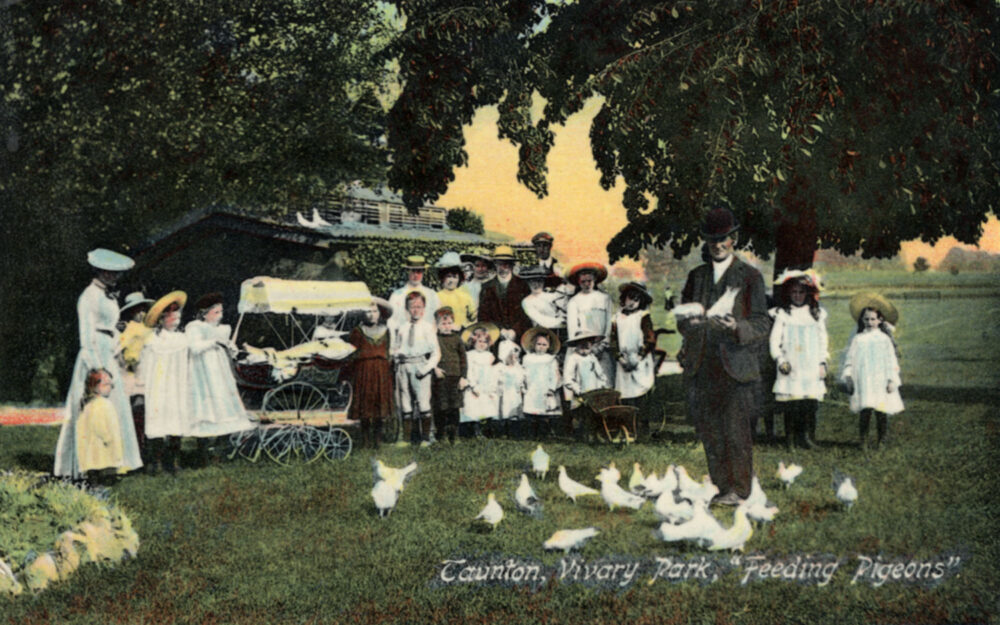