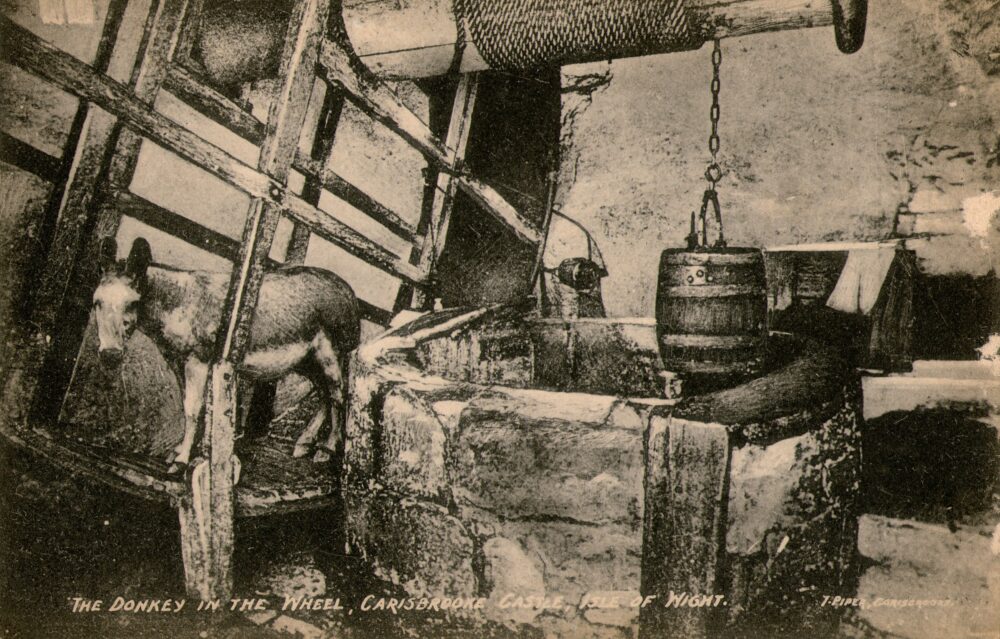 The well house at Carisbrooke was once the main supply of water for the castle. Built in the 1580s, a huge oak wheel would be turned to draw a bucket down to the water and back up again. For one bucket, the wheel must be turned 255m, a job that is thought to have originally been performed by prisoners. Since at least 1696 however, it is known that this role was performed by a team of donkeys,
English Heritage: Meet the Carisbrooke Donkeys 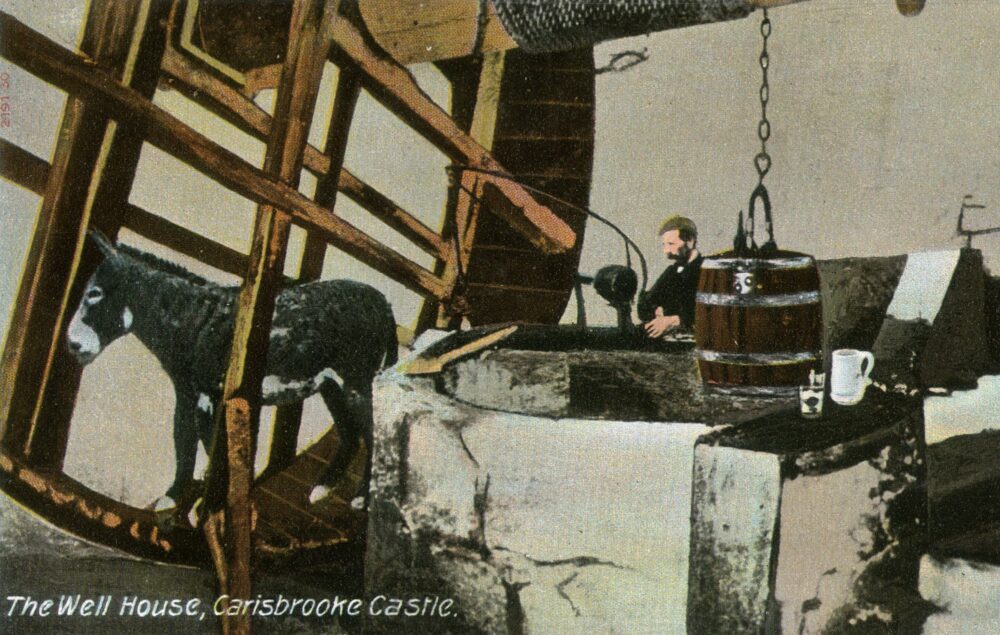 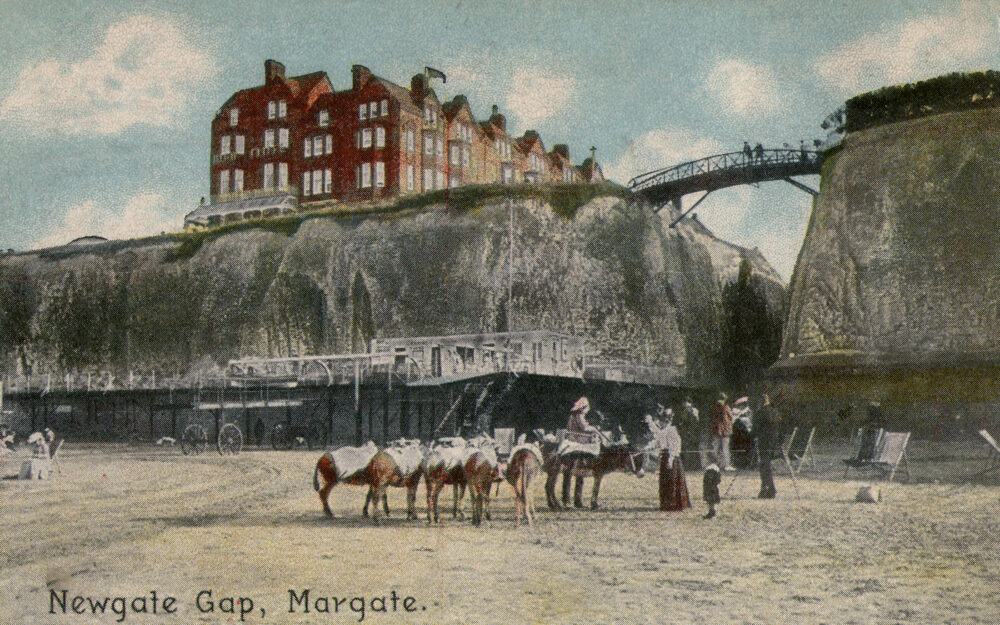 With the advent of the railways and cheap fares, holidays to the seaside became available to all, which meant the resorts of Thanet grew in popularity and size. Visitors came not just for the fresh sea air but entertainment as well. Walking along the promenade was popular and many seaside resorts extended this walk by building
a pier from the end of which you could catch a steamer. On the beach, tourists could enjoy a Punch and Judy show, musical entertainers and donkey rides. Margate was the first resort to popularise donkey rides on the beach in the early 1800s.
Vist Thanet: Holiday History children’s activity (pdf)

There are 32 ‘gaps’ along the ten bays of the North Thanet coast between Minnis Bay and Pegwell Bay, of which the largest is Newgate Gap – it was originally called ‘The Devil’s Gap’ due to its great depth and steepness. The gaps were initially cut by local farmers who wanted to gain access to the beach from the top of the cliffs in order to gather seaweed from the shore for use as manure on their crops, but this practice ceased as more modern chemical fertilizers became available. . . . As the eastern end of Cliftonville developed, bridges were built over some of the gaps, and an iron-girdered, wooden decking bridge was built over Newgate Gap by a local eccentric, Captain Frederick Hodges in 1861. By 1895, however, it became obvious that the numbers of visitors brought in to the area by the new railways had increased to the point where that bridge was too narrow to cope. As is generally the case in such situations, however, it was some time before the local Council decided to commit funds to the resolution of such a ‘minor inconvenience’, and it was not until 1907 that they decided to build a new bridge of concrete and steel to commemorate the Jubilee of Margate, which became a Borough in 1857 by being granted a Charter of Incorporation.
The Pulham Legacy 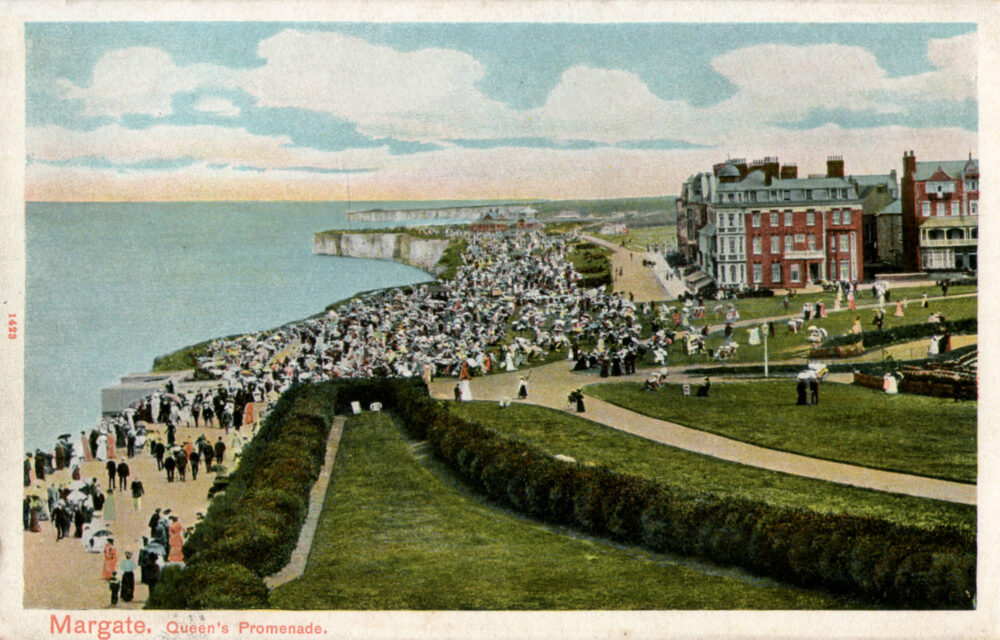 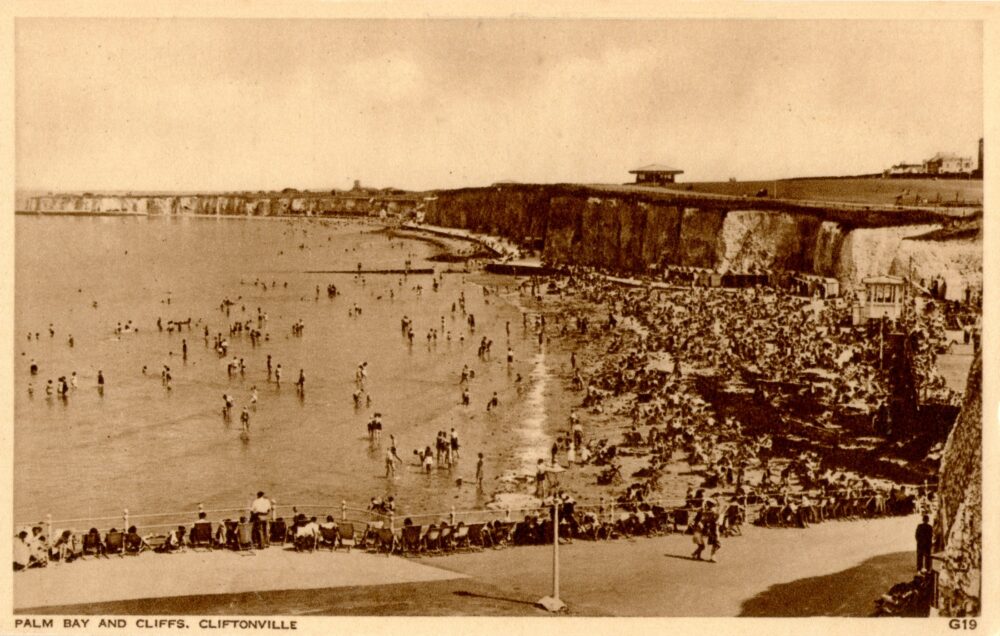 Palm Bay is a pleasant sandy beach not too far away from Margate’s town centre, between Walpole and Botany Bay. Despite its appeal, Palm Bay never seems to get as busy as the better known neighbouring beaches.
The Beach Guide

Neither of these pairs of postcards is the say. (Hint: keep an eye on the New Inn.)

Set into a steep hillside, Clovelly is one of the best known and most unusual villages in the North Devon. The cobbled high street winds its way down the hillside through traditional 16th century whitewashed cottages decked with fuchsias and geraniums. This street drops 400ft in the half mile down to the small harbour.
Devon Guide

In 1914, Christine Hamlyn’s programme of renovations reached the New Inn and pictures of the time show the inn sign, depicting a gannet, moving from one side of the road to another. At times, the Inn let rooms on both sides of the street.
The History Interpreter