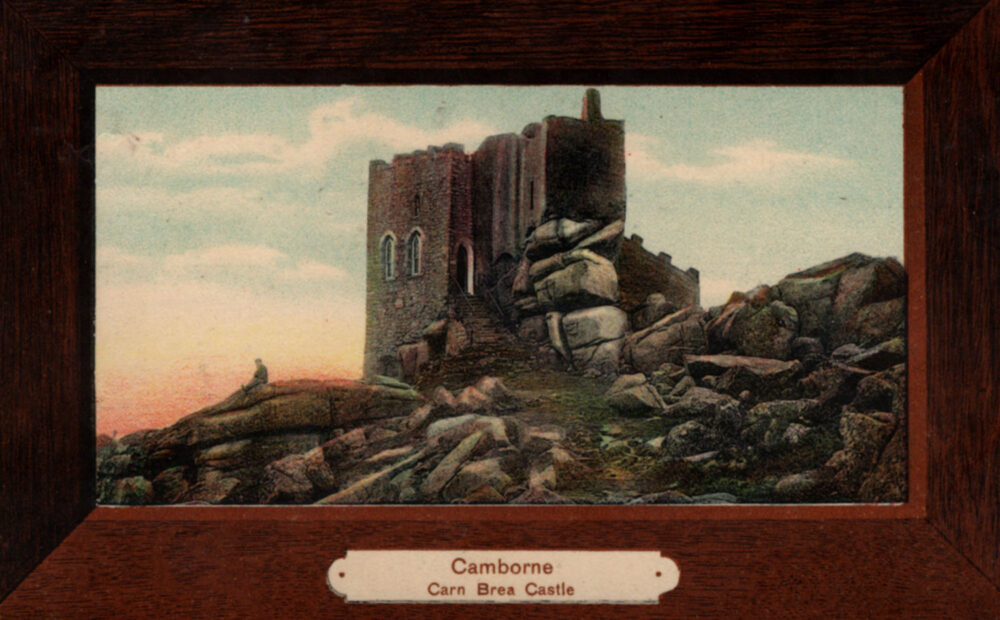 The castle is a small stone folly decorated in the romantic ideal style of a medieval/gothic castle. It has an irregular layout with four rectangular turrets round a core of the same height and an embattled parapet. The building is built into a large stone outcrop with a steep drop on the rear. The building was designed as a hunting lodge rather than a dwelling and measures 60 by 10 feet (18.3 by 3.0 m).The castle was originally built as a chapel, in 1379, thought to be dedicated to St Michael. Antiquarian William Worcester recorded that there were 32 castles on the Cornish peninsula, including Carn Brea which was described as a tower. The castle was extensively rebuilt in later periods, primarily in the 18th century by the Basset family as a hunting lodge. It is considered a folly, due to the huge uncut boulders that make up part of its foundations, giving the impression of the building melting into the land. Its use as a beacon for ships was recorded in 1898 when stipulated in the lease, the tenant agreeing to show a light in the north facing window. The castle had periods of disuse and disrepair in the 1950s to 1970s, until private renovation in 1975-1980.
Wikipedia

The castle actually sits on the so-called ‘Giant’s Seat’, which, according to legend, was used by John of Gaunt, a giant that is said to have once lived on Carn Brea. Legend says that he met his demise in battle with Bolster, the giant of St Agnes, who was said to be so big that he could stand with one foot on St Agnes Beacon and the other on Carn Brea. Poor ol’ John never stood a chance but his legend lives on up on Carn Brea, as there are several rock formations that are named after him, including his ‘cradle’ and his ‘coffin’. . . . It’s believed that the first stones were laid in the early 14th century and that the original structure was a chapel that was dedicated to St Michael and was built in 1379. A hundred years later, it was described as a ‘tower’ and in the 18th century it was given a much more castle-like look as it was being used as a hunting lodge by the Bassets, a local mine-owning dynasty that lorded over the region for some 700 years.
Proper Cornwall

Of Castles in Cornwall, intended for residence as well as defence, is Karn-bre, or Carn-brea Castle, near the Land’s End. This is very small, scarcely 60 feet long by 10 wide, built upon a ledge of rock, whose uneven surface has caused great difficulty in the level of the rooms upon the ground-floor. The building had three stories in some parts, in others but one. Part of the Castle is very ancient and of rude architecture ; and the less ancient portion is thought to have been built on older foundations. Carn-brea Hill abounds with antiquities: there are an ancient camp of irregular form, some cairns, and other antiquities of rough stone.
“Abbeys, castles, and ancient halls of England and Wales”, John Tibbs, 1872