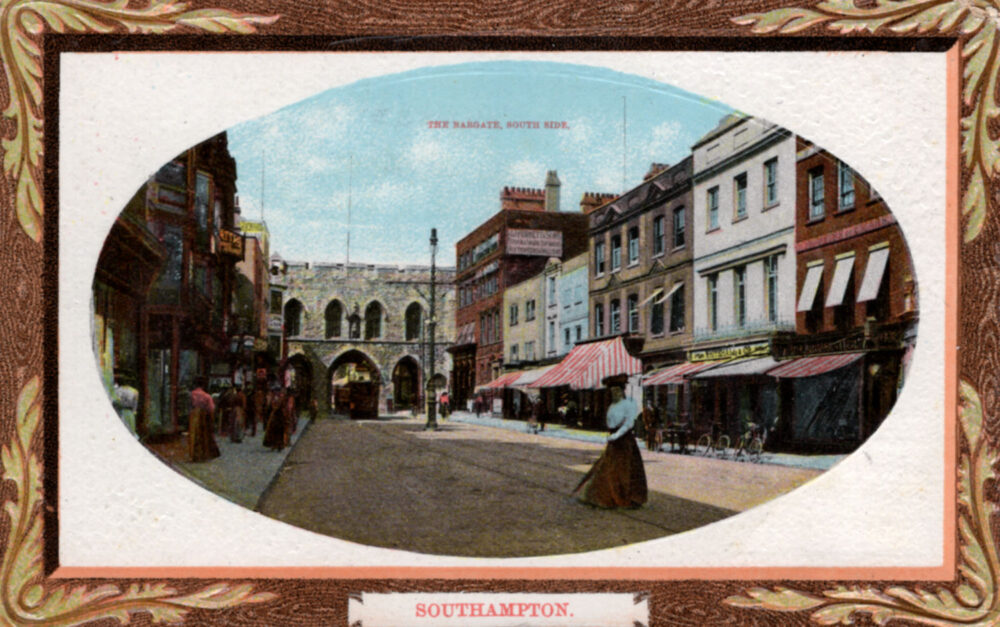 The Bargate, South Side | Southampton
1900s
“The Charterhouse Series of Southampton Views”

The Bargate was built as a town gateway in c1180. It also has a Guildhall on the first floor. It originally joined on to the town wall. In the 1930s it was separated from the wall. Between the centre 2 windows is a statue of George III in Roman costume. This replaced a wooden statue of Queen Anne. A bell was added in 1605. This was the curfew and alarm bell for the city. This is one of the finest town gateways in England.
Historic England

These fortifications gradually grew, ranging in date from the Norman period to the early 15th century, by which time the medieval town of Southampton was completely encircled by a lofty wall, averaging about 25ft feet to 30ft in height and extending nearly one-and-a-quarter miles in circumference. The defensive walls formed a rectangle, stretching north and south, following the line of the western shore and rounded off at the southwest corner. Built mainly of Isle of Wight limestone, the walls incorporated seven main gateways and were strengthened by 29 towers. The Bargate or North Gate dates from Norman times, its earliest feature the half-round arch dating from about 1175-1200, forming the core.
Northern Dail Echo: Pictures of Bargate through the years – the symbol of Southampton

The Bargate was built c. 1180, constructed of stone and flint. Alterations were made to the building around 1290, when large drum towers were added to the north side, with arrow slit windows. A two-storey extension was made to the south side towards the end of the 13th century, with four windows lighting the upstairs room. Work was also carried out to the interior of the upper room during the 13th century, when the stone fireplaces were installed. The embattled north front was added to the building around 1400. A survey of the town’s guns in 1468 reported that the Bargate held two breach loader guns and a brass muzzle loader. It is not clear when the Bargate started being used as a prison but the first records of it date from 1439. . . . A bell was added to the southwest corner of the building to 1579. The current bell is inscribed 1605 and was used as the city’s curfew and alarm bell. In 1644 the panels featuring Bevis of Hampton and Ascapart were repainted. The room above the gate itself was probably added shortly after 1400 and the town steward books mention a banquet held there in 1434. It was originally used as the city’s guildhall, until the 1770s. It was at this point that the city began to grow to the north of the gate. Also during the 18th century, five panels containing painted shields and the sundial were added to the building and in the middle of the century the old wooden lions were replaced with new lead sculptures.

Additional archways were added in 1764 and 1774. In 1765, a passage was cut through the eastern side of the arch for pedestrians. A further passage through the western side was added later. The construction of these passages ended (for a time) the Bargate’s use as a prison. In 1809 a statue of George III in Roman dress was added the middle of the four windows of the southern side. It replaced a wooden statue of Queen Anne. The statue was a gift to the town from John Petty, 2nd Marquess of Lansdowne and is made from Coade stone. Following the establishment of Southampton’s police force in February 1836, the upper room was used as a prison. The current guildhall within the Bargate was constructed in 1852 and was designed to be used as a criminal court. In addition to this the Bargate continued to be the site of meetings of Southampton’s court leet until 1856. In 1881 the panels featuring Bevis of Hampton and Ascapart were moved into the building for protection.
Wikipedia