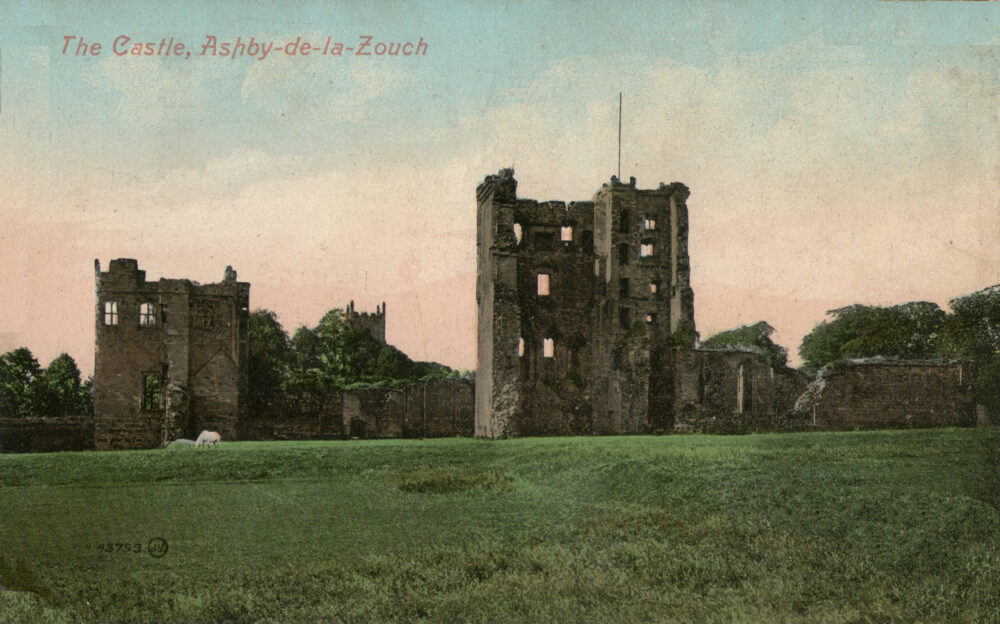 After the Norman Conquest the estates at Ashby, or Aschebie as it is called in the Domesday Book, was owned by the Earls of Leicester. There was no castle here at that time, just an unpretentious fortified manor house. . . . In 1474 Hastings was granted leave to crenellate at least four manors, and maybe five. This was no little thing; to crenellate meant you were trusted by the king, for only a trusted official could be allowed to fortify his house. So not only did the right to fortify a house mean you could defend it against attackers, it meant that you had the ear of the king, and were thus a very important person indeed. Work on Ashby de la Zouch castle actually began before the license to crenellate. Was Lord Hastings jumping the gun a little, assured of his place at Edward’s side? Perhaps, but Hastings did not simply add defensive features; he added ornamental pleasure gardens and extensive outbuildings and enclosed an area of 1200ha (about 3,000 acres) to be a hunting park.

The outcome of this ambitious project was to transform Ashby from a small manor house into a superb fortified residence; an imposing and impressive seat of power for one of the most influential men in the kingdom. The most impressive new feature introduced by Hastings was a kitchen tower that was at the time one of the largest in the country. Hastings’ original plans called for a further three towers set in a high wall around the property, but these further towers were never built. The old manor house was rebuilt and extended beyond all recognition, a new chapel built, and a number of service buildings. The tower still stands to its original four storeys, rising from storerooms at the base, to a kitchen, hall, and solar on the top storey. It wa, and still is, one of the most impressive tower houses in England.
Britain Express

During the Civil War Henry Hastings, younger brother of Ferdinando, the 6th Earl, occupied Ashby as a Royalist base, and Ashby formed a crucial link between Royalist operations in the north and south. Hastings fortified the town and castle on an impressive scale; the great tower was described in 1644 as ‘Hastings’ stronghold’. Charles I twice visited the castle during the fighting: on the second occasion he stayed the night at Ashby following the Royalists’ decisive defeat at Naseby on 14 June 1645. After a series of successful Parliamentarian raids on the town, Hastings eventually surrendered on 28 February 1646. He agreed to demolish the newly constructed fortifications around the town, while the garrison was allowed to march free with ‘trumpets sounding, drums beating, colours flying’. The castle buildings were initially used to imprison prominent Royalists, but later in 1646 it was directed that the defences be demolished. The earl subsequently complained that the demolition squad had far exceeded its orders and entirely ruined his ‘only convenient mansion’.
English Heritage

A traveller who visited the place in 1801 wrote regarding it: “Its dimensions seem to have known no bounds, either in the lines of arrangement, or in the altitude of the several storeys. The great hall in particular can be traced out, as well as the kitchens and many chambers of State, wherein are to be found, in good preservation, rich doorways, chimney-pieces, arms, devices, and other ornamental accompaniments, which serve to confirm that this pile must have vied with any of its castellated competitors for architectural fame that this country has produced.” The castle consisted of two large embattled towers, and on the S. of these the great tower or keep, containing the hall, with apartments, kitchens. The N. tower appears to have been inhabited the owner’s family, and its rooms have still the appearance of great splendour. At a distance of 300 yards is the Mount House, a strong triangular building, which is connected with the cellars of the N. tower by a subterranean passage.
“The Castles of England: their story and structure, Vol 1”, James Mackenzie, 1897, pp. 409-410