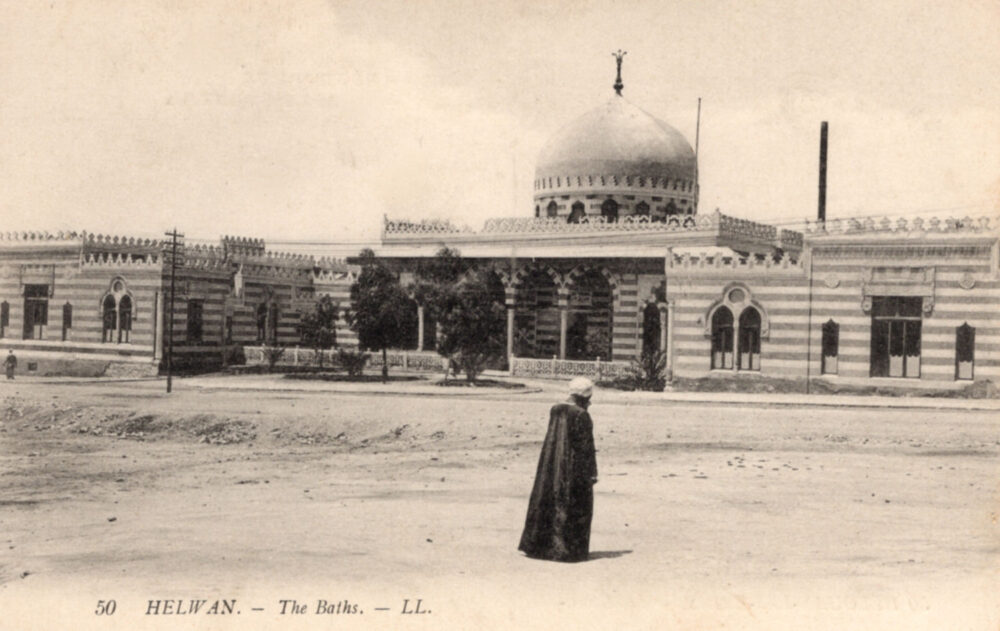 Sulphur springs were discovered in Helwan in 1874 by mere coincidence. It happened that several soldiers in Khedive Abbas’s army were suffering from ulcers. Fearing the spread of skin disease in Cairo, the khedive sent the inflicted soldiers away to Helwan. On their march they stopped at the hot sulphur and saline springs, and surprisingly they found their ulcers healing. News of the healing power of the springs spread through the army, and when Khedive Abbas learned about its potential as a health resort he built the Helwan spa (Hammamat Helwan) around the springs, but died before accomplishing the project.

When Khedive Ismaïl became ruler he sent a medical team to find out what they could about the site and to analyse the water coming from the sulphur springs. The team found that the water was beneficial for healing skin and venereal diseases. In this favoured spot, with its hot springs, agreeable climate and beautiful scenery, Khedive Ismaïl and his son Tawfiq created an artificial oasis in the second half of the 19th century. This involved the transportation of fertile soil from a considerable distance. However, there was a problem for the sick who visited the springs to seek a cure. To reach the springs, they had to walk for some three kilometres or hire a horse or donkey. Ismaïl therefore decided to build a railway to link Helwan to the capital. Soon Helwan was a spa for the wealthy and a popular vacation spot. In 1878 only 25 houses were built near that spa, but gradually more people came to settle there. In 1885 Khedive Ismaïl built a winter palace in Helwan, and after that members of the aristocratic Turkish class built luxurious villas nearby. According to statistics, around 1,000 people visited Helwan sulphur springs in 1887, nearly 30 persons daily.
Taking the waters (WATANI International)

While I have spoken of the Helwan springs as the most ancient spa of the world, their early history is somewhat obscure. It seems reasonably certain, however, that during the eighteenth dynasty, or some- thing over thirty-five hundred years ago, King Amenhotep sent persons afflicted with leprosy and other incurable diseases to these springs for treatment. There are perfectly authentic records of their being a health resort twelve hundred years ago, but from that time until a very recent period they had a very pre- carious existence, as the various layers of bricks, granite, marble, pottery, and the like found as ruins of ancient villages would seem to indicate. Some- where about 1 87 1 the Egyptian Government inaugurated a new era for these springs by reconstructing the baths, building a hotel, planting trees and the like, so that now a pleasant, well-built town, with palm groves and villas, and a good railway from Cairo, stands where not long ago was but a waste of yellow sand.
. . .
Thus far about a dozen springs have been rediscovered. They are all thermal, vary- ing in temperature from 77° to 86° F., but they differ in their chemical constitution, for some are sulphur- ous and others chalybeate and saline.
. . .
The chalybeate water is chiefly used for its aperient, and the saline for its purgative effects. Both are odorless and colorless. The hot sulphur springs are those which enjoy the greatest repute and are most valuable. As soon as one enters the town their odor becomes apparent. The sulphur in the air turns silver ornaments black. The water of the springs is at first quite clear, but upon exposure to the air becomes covered with a film of sulphur and lime salts, and a greenish cryptogam, called baregine (from the Bareges waters of the Pyrenees) develops in it.
The bath-houses are commodious and luxurious, kept in good order, and are indeed up to the usual standard of similar institutions in the better-known health resorts. The water is artificially heated to higher temperatures when required. A European physician is in charge of the establishment, and European physicians are numerous in Cairo, near at hand. The two hotels are furnished, and unfurnished villas to let afford excellent accommodations for invalids.
The diseases for which these baths are indicated are preeminently rheumatism and certain skin dis- orders, and, in conjunction with the natural advantages of such springs the world over, the incomparable winter climate of Egypt is to be considered.
“Medical notes in Egypt”, Frederick Peterson, 1893

Helwan’s Bath Establishments. — These are the property of the Egyptian Government, who take an active control and interest in them, and have appointed a Resident English Medical Director. The baths were let on lease in 1899 to the George Nungovich Company.

The old baths, which were entirely renewed at a large expenditure four years ago, and which were the only baths then in existence at Helwan, are now reserved merely for second-class patients. The advantages of this arrangement, both for the first and second-class patients, are obvious. The sulphur waters in use here are identical with those in the new baths, situated a hundred yards away.

The new bath establishments were planned in 1897-1898 by the Resident English Medical Officer, under the initiative of Mr. Felix Suares, and after being approved by the Public Works Department of the Egyptian Government, were put into execution. The architect was the late Mons. Bottigelli, and Messrs. Suares undertook to finance the concern and carry out a certain stipulation formulated by the Public Works Department under Sir William Garstin, K.C.M.G.

It is no exaggeration to say that the new bath establishment, which was officially opened by H.H. the Khedive in December 1899, is equal to anything of its kind in Europe, and even superior to many well-known bath establishments.

The land on which it is built was given freely by the Egyptian Government, and the establishment has been built on Oriental lines, with Eastern magnificence. It is unusually well lighted and ventilated, and whilst there is not a step in the whole building, it embodies the latest and best hygienic ideas. It contains a large verandah, fine entrancehall and dome, immersion baths (large and small), about thirty separate dressing rooms, needle baths and douches of all kinds, electric, vapour, steam, and hot-air baths, dry and wet inhalation, with waiting rooms, cooling rooms, and every kind of convenience.
. . .

There is a small but well-equipped cafe in the establishment, and visitors can obtain any kind of light refreshments.