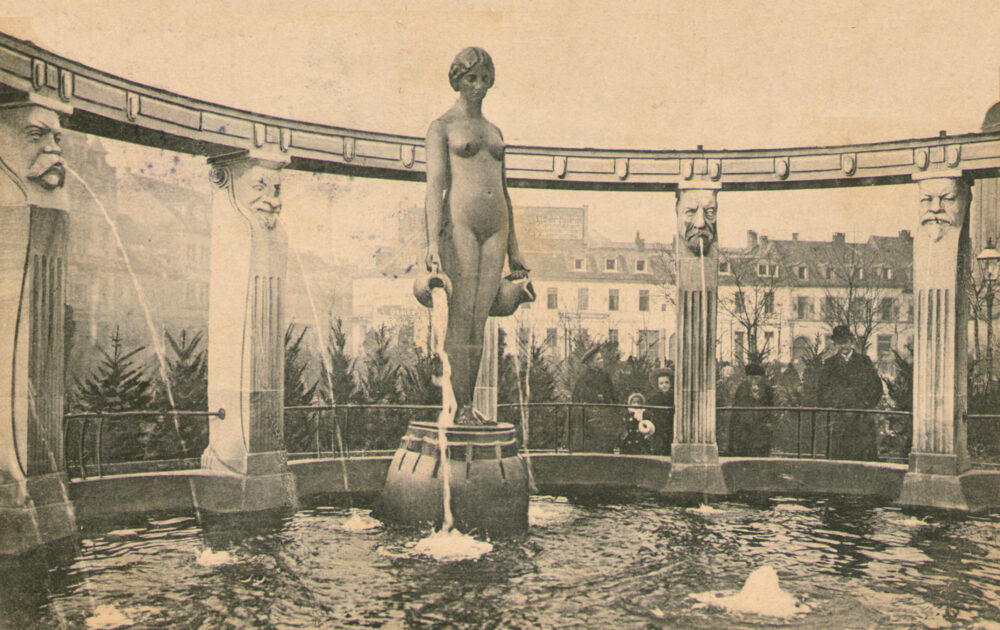 (Via Google Translate)
In 1903, the architect Hermann Billing , who was a member of the artists’ commission, was commissioned to create a fountain for the center of the square without a design competition. Billing planned a fountain basin under a columned hall, in the center of which is the figure of a spring nymph should be placed. The production of the bronze figure was entrusted to the young sculptor Hermann Binz (1876-1946).

However, the naked nymph met with opposition from the city council, so Billing and Binz modified the designs so that the nymph should be placed at the edge of the pool on a flat base and without the canopy. The columns then only carry a ring-shaped open entablature. The water was supposed to flow into the basin from gargoyles in the form of faces on the pillars, the faces were directed towards the nymph. That has been approved. When the construction of the fountain was completed in the summer of 1905, there were surprises, ridicule and rejections, because not everyone liked both the naked bronze figure and the faces. Binz had worked out the faces as caricatures of well-known Karlsruhe personalities, especially those city councilors who had rejected the first draft.
Wikipedia.

(Via Google Translate)
The fountain was designed in 1905 by the architect Hermann Billing . The original design envisaged a spring mermaid placed on a pedestal, in the spirit of Art Nouveau , but it did not yet include the rotunda with the male faces. The draft was hotly debated in the municipal council. The depiction of a naked woman in such a prominent position was felt by some council members to be inappropriate. Nevertheless, the draft was finally released and Hermann Billing was allowed to realize it, including artistic modifications. He did this together with the sculptor Hermann Binz. Since Billing was obviously annoyed by the discussion in the municipal council, he designed the fountain in such a way that the municipal council members, in addition to him and Binz, also look at the naked woman. Oberbaurat Reinhard Baumeister, who preferred to see a girl in traditional costume, is even scratched by a mermaid on the beard.
Stadtwiki Karksruhe