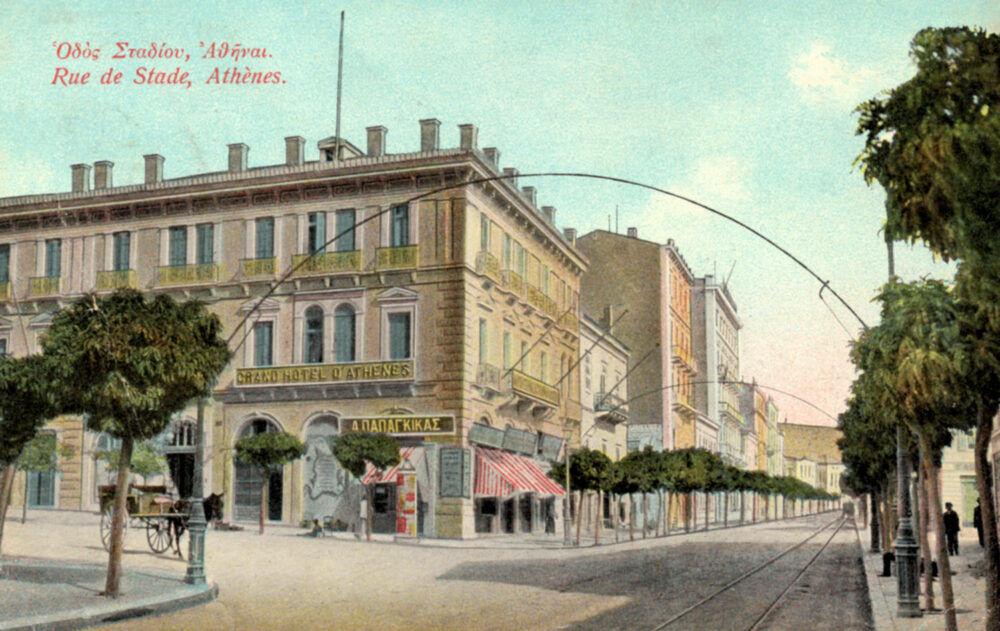 Stadiou Street is Athens’ major street linking the Omonoia and Syntagma Squares. It runs diagonally and is one-way from northwest to southeast. The street is named after the ancient Panathenaic Stadium located about 3 km southeast of the downtown core and is aligned directly with the ancient stadium. This street had existed during ancient times. The modern street was originally designed to extend all the way to the stadium. The project was cut short for lack of funding, but the name remained. . . . The modern street was first rebuilt in the early to mid-19th century. The street was later paved. Streetcars and trolleys were added in the 20th century and the street was mainly two-way. Old two and three storey neo-classical buildings were located in this street. After the Greek Civil War, it became one-way with three lanes and parking spaces. In the 1990s several buildings were demolished and eight and ten storey buildings were built in their place; several neo-classical buildings survive. It is mainly a shopping street, with upscale shops clustering towards Syntagma Square and lower scale ones towards Omonoia Square.
Wikipedia

Stadiou 32 and Korai 2 (now housing the Zara clothing store). The building was constructed in the 1880s, and originally known as “Hôtel d’Egypte”. By 1894, Baedeker was referring to it as “Hôtel d’Athènes”. Its final name of “Grand Hôtel d’Athènes” appeared some time around 1913 — thus providing the earliest likely date for this image.
Flickr

Hidden in the basement of the Spanish fast fashion leader, at the junction of Stadiou and Korai Streets, some ancient ruins are on display on the lower floor, next to the children’s apparel. The ruins are thought to be tombs dating from the Roman era. They’re a fascinating reminder that the ancient city hasn’t really disappeared.The building itself has lived many lives. It is thought to have been built between 1840 and 1890. It was apparently the first residence of Ioannis Hadjikyriakos (1818-1896), founder of one of the oldest charity institutions in Greece, the Hatzikyriako Foundation for Children’s Protection. When he died, he mentioned in his will that the property should be used as a hotel. In 1890, the building was known as the Hôtel d’Egypte, a second-class tourist establishment. It was later renamed Hôtel d’Athènes, and appeared in several tourist guides. At the time, the restaurant was quite popular among locals and visitors.
The Culture Trip