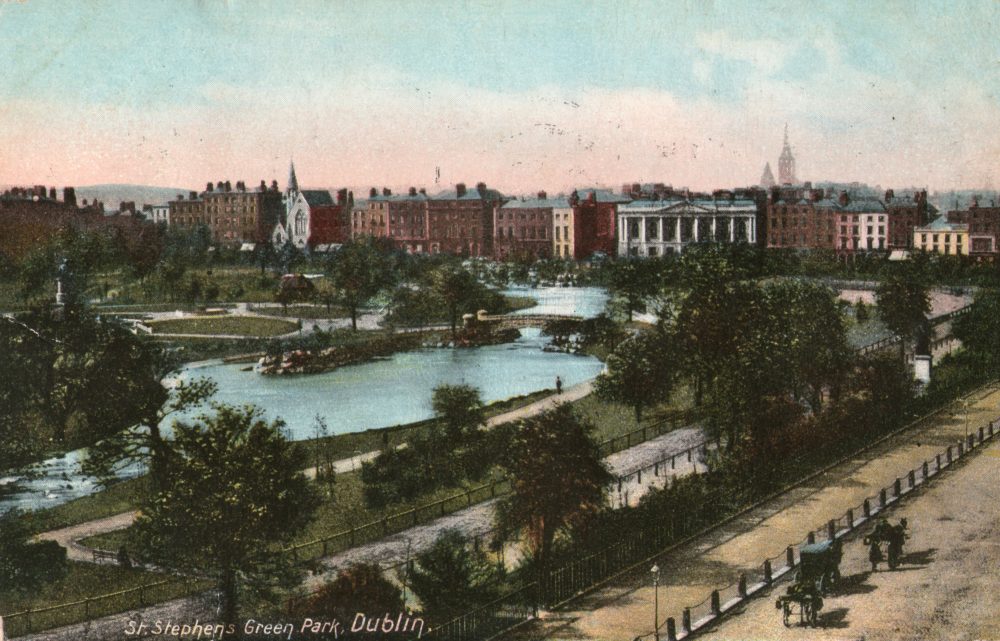 The name St Stephen’s Green originates from a church called St Stephen’s in that area in the thirteenth century. Attached to the church was a leper hospital. Around this time the area was a marshy piece of common ground, which extended as far as the River Dodder and was used by the citizens of the city for grazing livestock. In 1663 the City Assembly decided that the plot of ground could be used to generate income for the city and a central area of twenty-seven acres was marked out which would define the park boundary, with the remaining ground being let out into ninety building lots. Rent generated was to be used to build walls and paving around the Green. Each tenant also had to plant six sycamore trees near the wall, in order to establish some privacy within the park. In 1670 the first paid gardeners were employed to tend to the park.
…
By the nineteenth century the condition of the park had deteriorated to such an extent that the perimeter wall was broken, and many trees were to be found in bad condition around the park. In 1814 commissioners representing the local householders were handed control of the park. They replaced the broken wall with ornate Victorian railings and set about planting more trees and shrubs in the park. New walks were also constructed to replace the formal paths previously found in the park. However with these improvements, the Green then became a private park accessible only to those who rented keys to the park from the Commission, despite the 1635 law which decreed that the park was available for use by all citizens. This move was widely resented by the public.

Sir Arthur Guinness, later known as Lord Ardilaun, grew up in Iveagh House located on St Stephen’s Green, and came from a family well noted for its generosity to the Dublin public. In 1877 Sir Arthur offered to buy the Green from the commission and return it to the public. He paid off the park’s debts and secured an Act which ensured that the park would be managed by the Commissioners of Public Works, now the OPW. Sir Arthur’s next objective was to landscape the park, and provide an oasis of peace and tranquility in the city. He took an active part in the design of the redeveloped park, and many of the features in the park are said to have been his suggestions. The main features of the redeveloped park included a three-acre lake with a waterfall, picturesquely-arranged Pulham rockwork, and a bridge, as well as formal flower beds, and fountains. The superintendent’s lodge was designed with Swiss shelters. It is estimated the redevelopment of the park cost £20,000.
St Stephen’s Park

Access to the Green was restricted to local residents, until 1877, when Parliament passed an Act to reopen St Stephen’s Green to the public, at the initiative of Sir A.E. Guinness, a member of the Guinness brewing family who lived at St Anne’s Park, Raheny and at Ashford Castle. He later paid for the laying out of the Green in approximately its current form, which took place in 1880, and gave it to the Corporation, as representatives of the people. By way of thanks the city commissioned a statue of him, which faces the College of Surgeons. His brother Edward lived at Iveagh House, which his descendants gave in 1939 to the Department of External Affairs (now the Department of Foreign Affairs).

During the Easter Rising of 1916, a group of insurgents made up mainly of members of the Irish Citizen Army, under the command of Commandant Michael Mallin, his second-in-command Kit Poole, and Constance Markievicz, established a position in St Stephen’s Green. They numbered between 200 and 250.[ They confiscated motor vehicles to establish road blocks on the streets that surround the park, and dug defensive positions in the park itself. This approach differed from that of taking up positions in buildings, adopted elsewhere in the city. It proved to have been unwise when elements of the British Army took up positions in the Shelbourne Hotel, at the northeastern corner of St Stephen’s Green, overlooking the park, from which they could shoot down into the entrenchments. Finding themselves in a weak position, the Volunteers withdrew to the Royal College of Surgeons on the west side of the Green. During the Rising, fire was temporarily halted to allow the park’s groundsman to feed the local ducks.
Wikipedia