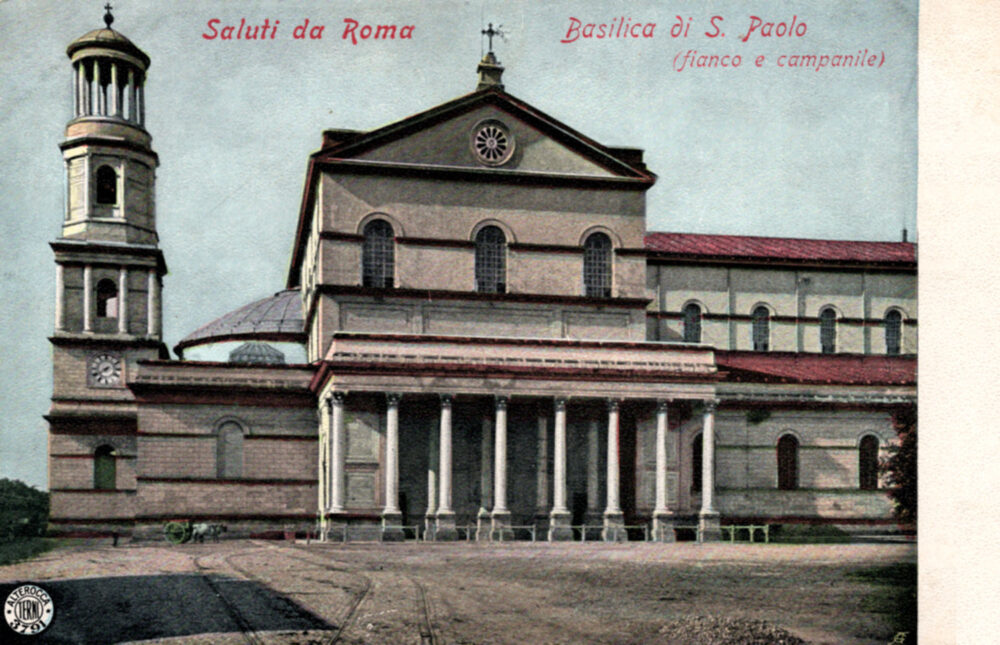 Here, in Rome’s second-largest church, you will find the tomb of St. Paul under the main altar. Destroyed by fire in 1823, it was rebuilt according to the original specifications through contributions from all over the world. When you look at the facade from the front, you will see representations of the twelve apostles and a lamb. This comes from the Book of Revelation, 21:14 “And the wall of the city had twelve foundations, and on them the twelve names of the twelve apostles of the Lamb”. Perhaps the most notable of all objects within the Basilica are the chains that were used to bind Saint Paul as a prisoner in Rome from 61-63 A.D. are displayed in a gold reliquary near the Apostle’s tomb and available for public veneration. On the Feast Day of Saint Paul (June 29th) each year, the chains are taken in procession around the Basilica.
The Catholic Travel Guide

The Papal Basilica of Saint Paul Outside the Walls (Italian: Basilica Papale di San Paolo fuori le Mura), commonly known as Saint Paul’s Outside the Walls, is one of Rome’s four major papal basilicas, along with the basilicas of Saint John in the Lateran, Saint Peter’s, and Saint Mary Major, as well as one of the Seven Pilgrim Churches of Rome. . . . The basilica was founded by the Roman Emperor Constantine I over the burial place of Paul of Tarsus, where it was said that, after the apostle’s execution, his followers erected a memorial, called a cella memoriae. This first basilica was consecrated by Pope Sylvester in 324. In 386, Emperor Theodosius I began erecting a much larger and more beautiful basilica with a nave and four aisles with a transept. It was probably consecrated around 402 by Pope Innocent I. The work, including the mosaics, was not completed until Leo I’s pontificate (440–461). In the 5th century, it was larger than the Old Saint Peter’s Basilica. The Christian poet Prudentius, who saw it at the time of emperor Honorius (395–423), describes the splendours of the monument in a few expressive lines.
. . .
On 15 July 1823, a workman repairing the copper gutters of the roof started a fire that led to the near-total destruction of this basilica, which, alone among all the churches of Rome, had preserved much of its original character for 1435 years. Marble salvaged from the burnt-out Saint Paul’s was re-laid for the floor of Santo Stefano del Cacco. In 1825, Leo XII issued the encyclical Ad plurimas encouraging donations for the reconstruction. A few months later, he issued orders that the basilica be rebuilt exactly as it had been when new in the fourth century, though he also stipulated that precious elements from later periods, such as the medieval mosaics and tabernacle, also be repaired and retained. These guidelines proved unrealistic for a variety of reasons and soon ceased to be enforced. The result is a reconstructed basilica that bears only a general resemblance to the original and is by no means identical to it
. . .
The covered portico (or narthex) that precedes the façade is a Neo-classicist addition of the 19th-century reconstruction. On the right is the Holy Door, which is opened only during the Jubilees. On the inside is a second door, known as the Byzantine door,which was present in the pre-19th century basilica; it contains on one side 56 small square engraved bronze panels, and was commissioned in 1070 by Pantaleone, Consul of Amalfi in Constantinople, and putatively cast in Constantinople. It depicts a number of episodes in the life of Christ and the apostles. The new basilica has maintained the original structure with one nave and four side aisles. It is 131.66 metres (432.0 ft) long, 65 metres (213 ft)-wide, and 29.70 metres (97.4 ft)-high, the second largest in Rome.
Wikipedia 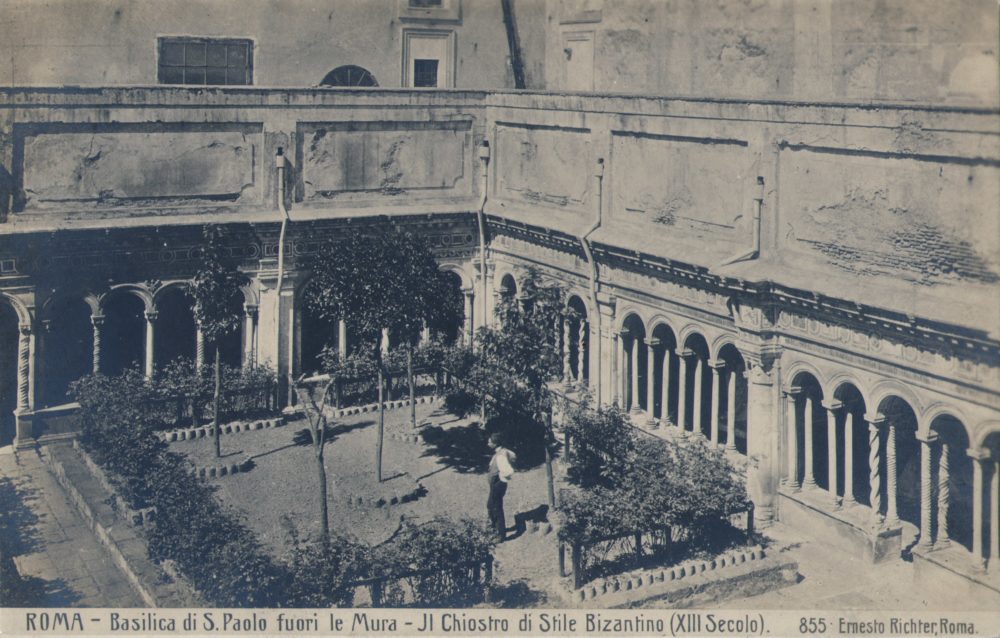 South of the transept is the cloister, considered “one of the most beautiful of the Middle Ages”.[11] Built by Vassalletto in 1205–1241, it has double columns of different shapes. Some columns have inlays with golden and colored-glass mosaics; the same decoration can be seen on the architrave and the inner frame of the cloister. Also visible are fragments from the destroyed basilica and ancient sarcophagi, one with scenes of the myth of Apollo.
Wikipedia

Saint Paul reached Rome in 61 AD for the judgment. Between 65 and 67, under Nero, he was beheaded. His body was buried some 3 km from the place of his martyrdom, along Via Ostiense in a Roman burial site named “praedio Lucinae” because belonging to a Christian woman named Lucinia. According to tradition, the Basilica of St Paul Outside the Walls lies where Timoteus, a disciple of the saint, buried his remains. Shortly after the martyrdom of the Apostle Paul, his burial place became a place of pilgrimage and worship. Here, they built a memorial where pilgrims would go to pray during the centuries of persecution.

In 257 Emperor Valeriano made it illegal for Christians to gather and go to the cemetery. This caused the moving of the remains of Peter and Paul to the Catacombs of St. Sebastian in the ancient Appian Way. When Emperor Constantine stopped the persecution against the Christians with the Edict of 313, the two saints were brought back to their respective resting places. It’s the same Constantine who ordered the building of the basilica on St. Paul’s burial place. They inaugurated it in 324 in a much smaller size than the modern one. Except for St. Paul’s tomb, the rest of the cemetery was heavily dismantled to make way for the construction of the basilica. The tomb of the Apostle was enshrined in a bronze cube covered with a marble layer where they inscribed “PAULO APOSTOLO MART”.
Rome Actually