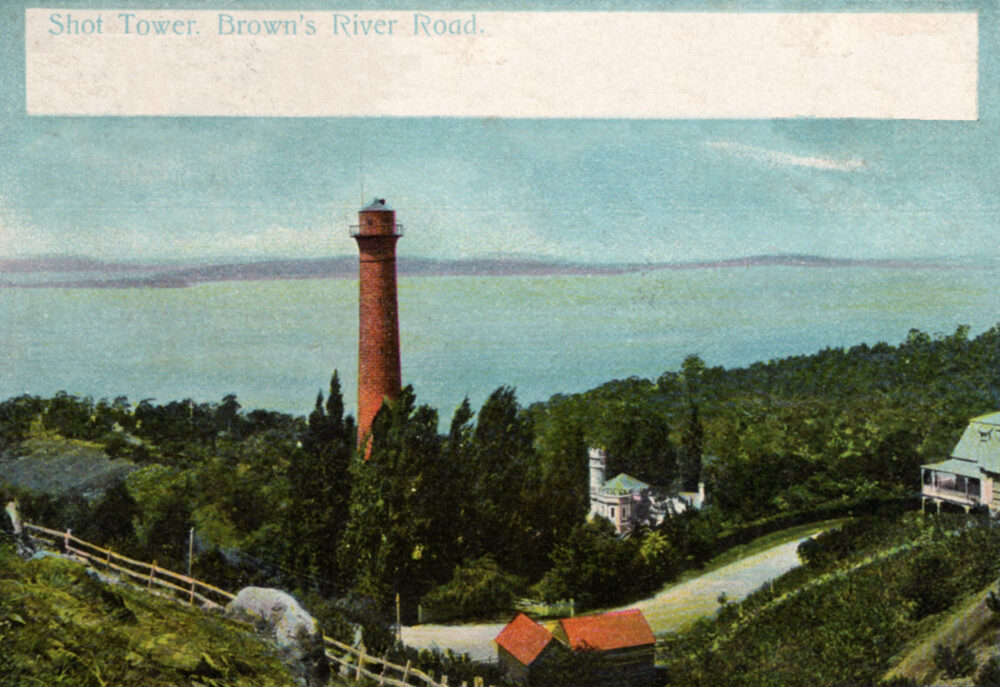 Some photos of the inside

The Shot Tower is one of Tasmania’s most distinctive heritage landmarks and has presided over the waterside suburb of Taroona since the late 1800s. A testament to Joseph Moir’s ingenuity, the circular sandstone tower stands 58 metres high and is still one of the tallest buildings in Tasmania. Today, the enormity of Moir’s ambitious project is not lost; the Shot Tower, built with the purpose of producing lead shot, is one of few remaining circular structure of its kind in the world.
Parks & Wildlife Service

The Shot Tower in Taroona was built in 1870 by Joseph Moir, to make lead shot for smooth-bore muzzle-loading guns. It is the only circular stone shot tower in the southern hemisphere. Moir also built a three-storey factory next door. Lead was melted in cauldrons over wood fires at the top of the tower, arsenic and antimony were added, and, for larger size shot, the lead was poured through a colander at the top of the tower, falling 152 feet into a tub of water at the base. Small shot fell 30 feet in the factory. The shot was dried, sorted, graded, polished, weighed, packed and sold, and eighty tons were produced annually.Until Federation, the business was protected by a tariff, but after 1901 Moir could not compete with the three other shotmakers in Australia, and the business closed in 1905. The Tower has become a tourist attraction.
The Companion to Tasmanian History

Lead ingots laced with arsenic and antimony were hauled to the top of the tower, where they were melted. The liquid was then poured down the centre of the tower through a colander, which separated it into drops. Once in free-fall, these drops formed naturally into spheres. They instantly solidified upon hitting a pool of water at the bottom of the tower.
Tas That Was – The Taroona Shot Tower (Tasmanian Times)