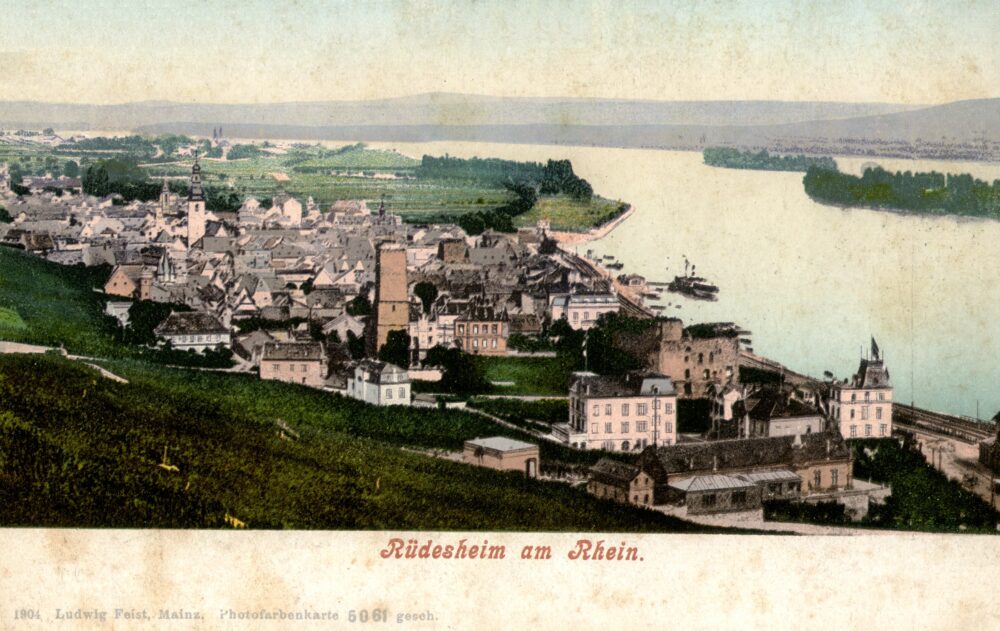 Rüdesheim am Rhein (also spelled Rudesheim or Ruedesheim) is a city in the Rheingau in Hesse, Germany, at the southern end of the Rhine Valley, across the river from Bingen. The town incorporates the village of Assmannshausen, also on the Rhine but on the other side of a bend in the river, and is also known as Rüdesheim am Rhein to distinguish it from the smaller nearby town of Rüdesheim an der Nahe.
Wiki Voyage

On 1 January 1818, Rüdesheim received town rights. After Prussia annexed the Duchy of Nassau in 1867 and divided the area into districts (Kreise), Rüdesheim became a district seat in the newly founded Rheingaukreis. It held this status 110 years until 1977, when in the course of municipal reform in Hesse the districts of the Rheingaukreis and the Untertaunuskreis were merged into the new Rheingau-Taunus-Kreis, and Rüdesheim had to yield the district seat to Bad Schwalbach. In 1877, the first foundation stone was laid for the Niederwalddenkmal, a patriotic monument above the vineyards which would be finished in 1883. It attracted many tourists who could reach it on a cog railway. Today, a gondola lift brings visitors up to the monument. Tourism has more and more replaced shipping as a source of income.
Wikipedia.