ZEPPELIN SHOT DOWN CREW OF 30 KILLED
French Anti-Aircraft Guns Reach Raider at a Height of More Than Two Miles.
WAS COMING FROM LONDON
Crew, After Being Hit, Throw Over Bombs, Which Fail to Explode
Some of the Crew Jump to Death

PARIS, March 17 — A Zeppelin, which probably participated in the attack on London last night, was brought down by anti-aircraft guns near Compiegne, about thirty miles from Paris, at 5.30 this morning on the return flight to its base. The giant airship, which was flying at a height of more than two miles, was sighted before dawn, and the defense guns were put into action immediately. The dirigible was hit soon after being located, and, after bursting into flame, fell swiftly to the ground. All of the crew were lost.
(Rest of news story, although you have to log-in).

From end of the article:

London Announcement on Raid
LONDON, March 17 — The air raid last night was the first visit of Zeppelins in many months, and it seemed to have been expected, as it failed to cause any excitment, even amongst the homegoing theatregoers. The raiders were favored by a dark and moonless night. Graf Zeppelin over Friedrichshafen, where it was built.

Probably the most successful of the German airships, the Graf Zeppelin operated a passenger service between 1928 and 1937. In 1920 it circumnavigating the globe in 3 week, including the first non-stop flight over the Pacific.

In this time between wars, the battle between airships and airplanes over who would dominate passenger services still hadn’t been decided. The zeppelins were slow, but could carry passengers further, and in luxury that the small, noisy planes couldn’t match. Boutique au coin des Halles avant et pendant la guerre.
Shop at the corner of the Halles, before and during the war.

These two pictures were on the same postcards. There are many single image cards and other photos showing war damage. There are some on the Great War in a Different Light site: a Personal Narrative of a Visit to the Ruined City and Ypres: the Unique City. 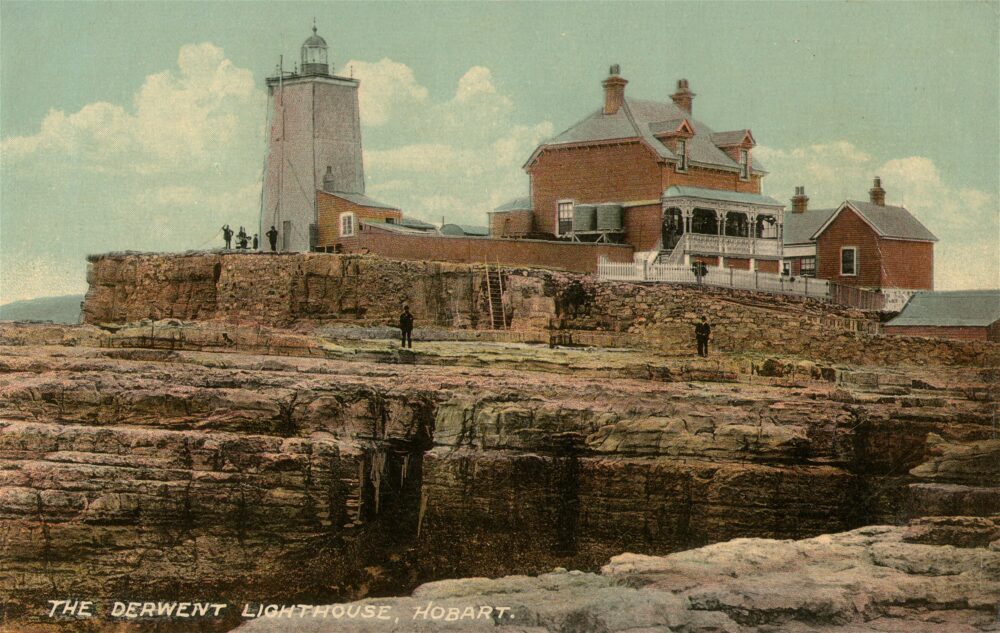 The Derwent Lighthouse, Hobart.
c.1910
blank on back (nothing, not enough any lines)

Several significant shipwrecks and groundings including the Bombay (1830), SS Lintrose (1832) and the Princess Royal (1832) with 300 free women settlers on board caused agitation from merchants and residents in Hobart Town for a light to be erected. Lt Hill, the Port Officer, drew up plans for a wooden light, which was approved and erected in 1832. It had a timber crossbar and the locally made apparatus was raised and lowered by hand. The light was manned by a keeper and two convict assistants living in harsh conditions in tents. John Lee Archer inspected the light and was dissatisfied with arrangement of light and recommended it be upgraded. His rubble tower was built within the timber framework of the existing tower and was completed and operating in 1833. Despite these improvements, the light apparatus still failed to meet up with expectation and in 1835 a new lamp was fitted. Ship owners still complained the light was inadequate but it was not upgraded. Finally, in 1851, another new apparatus installed, but the ship owners still considered the light unsatisfactory. In 1858 the newly formed Hobart Marine Board took control of light. By now a stone hut had been built for the keepers.

A curious episode happened in 1862 when one of the keeper’s children was claimed to have found a high grade gold bearing quartz nugget. The Iron Pot gold rush was on within hours of their father’s report, however the 200 potential diggers were disappointed with hours of their arrival as no further gold was apparent.
Light Houses of Australia

Then, in 1884, it was decided to build a home next to the lighthouse for its keeper James Parkinson and his ever growing family. In 1885 tenders were called for the construction of a 2 storey house and the keeper’s conditions were markedly improved when the new head keeper’s cottage was constructed. It was unusual to have two storey cottages on light stations but on the 0.4 hectare island, space was a premium. This resulted in one of the most unusual sights ever witnessed in Tasmania. Whilst the gothic style house would not have been out of place in central Hobart, to passing sailors it must have looked totally at odds within such dramatic wilderness. The home itself featured lead-light windows and a cast iron laced veranda. Dormer windows on the second level gave a bird’s eye view of the restless sea and a regular looking front door welcomed passing travelers. The home was built only 20 feet above sea level and made the most of a minimal amount of land. The first and only person born on the island was baby Essie (or Elsie) Margaret Roberts, born to the head keeper’s wife in 1895.

In the same year, 1895, a huge storm arose, driving waves right over the island. The assistant keeper’s quarters were abandoned for the safety of the head keeper’s cottage as they flooded. Full water tanks, sheds and a stone retaining wall were washed away. It is believed that the keeper and families then retreated to the lighthouse. In the morning, there was devastation everywhere. There was even kelp clinging to the uppermost rails of the lighthouse, over 20 metres above sea level. There had been no loss of life and the keepers had worked all night and kept the light going. For nearly 50 years the house stood as a testament to human endeavor until technology made the job of lighthouse keeper obsolete. The de-manning of the lighthouse was announced in a notice to mariners in 1920 – that the fixed white light on Iron Pot Island, Derwent River, will be replaced by a group flashing white light in July 1920. The lighthouse became automated and the house was demolished in 1921. Although no-one is certain of its fate, it is believed the home was transported back to Hobart by ship where it was sold off at auction piece by piece.
On the Convict Trail 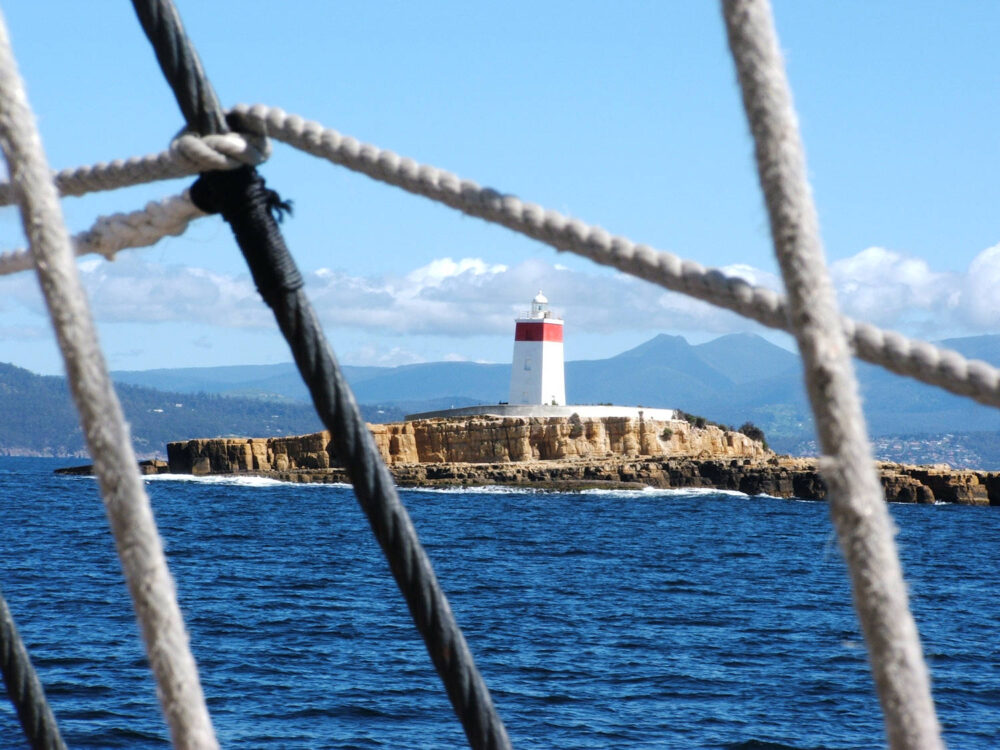