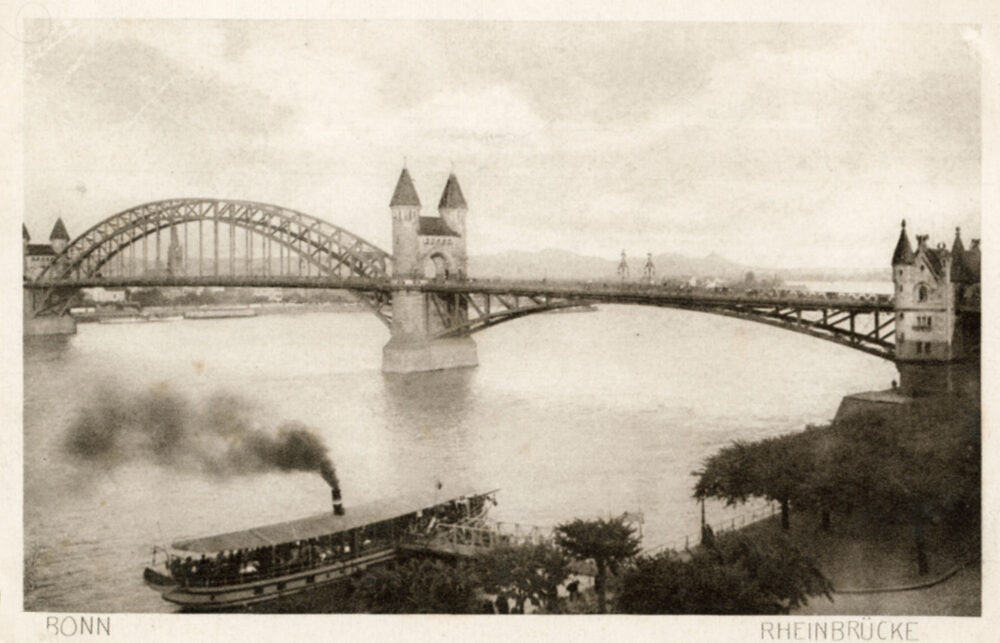 In July 1895, a competition for the bridge was announced. Gutehoffnungshuette from Oberhausen, R. Schneider from Berlin and the architect Bruno Moehring won the 1st prize awarded with 8,000 marks. The winners also received the contract to build the bridge. In April 1896 the construction began and 33 months later the bridge was opened for public traffic. At this time, with a main span of 188 meters, it was the largest and by its situation in front of the picturesque Siebengebirge most beautiful bridge over the Rhine. The financing of the finally 4 million marks (155% of the first estimation) was realized by a public loan. From the beginning, all passers had to pay a bridge toll. This toll was hang up for cars in 1927 and finally for all passers in 1938.
Wikipedia

By the late 19th century, the ferry could not cope with the increase in traffic. In 1889, it was therefore decided to build a road bridge, a major undertaking. In July 1895, a competition for the construction of a bridge was organised. The winning architect was Bruno Möhring. As with most major building projects, there were a number of issues, which needed to be sorted. The ferry company went to court, as they were concerned about their revenue. This was settled by paying compensation of altogether 220,000 Mark. The town council of Bonn encountered problems with their counterpart in Vilich (then the dominant part in the area which is now Beuel) on the opposite side of the Rhine. A major argument was about who paid what. Initial estimates expected the costs to amount to 2.58 million Mark. Bonn wanted Vilich to contribute 10%. However, they only offered 2,500 Mark, approx.. 0.1%.
. . .
The bridge was officially opened on 17 December 1898 at 2pm. It had a total length of 432 metres and a span of 188 metres. At the time, it was the largest arched bridge and was considered to be one of the most beautiful. To show of the pride and power of its initiators, its railings were decorated with grape vines and leaves. The toll booth was flanked by imposing lions. The lion is still part of the town’s coat of arms. There were altogether four lions, of which three have been rediscovered and are now in a local museum.
. . .
During WWII, the bridge withstood repeated Allied bombing, until, on 8 March 1945, it was destroyed by German forces, who had retreated to Beuel. However, it only stopped the advance of the Allied troops for a short while. . . . As early as August 1945, the construction of a new bridge was discussed by the Bonn town council. The plans were ready in March 1946 and work started in September of the same year. . . . The piers of the old bridge were undamaged and were used as the base of the new one.
Dottie Tails